Guest Contributor January 17, 2014 No Comments on Cassie’s Corner: How to beat travel trauma

Cassie Thomas: Underestimate jet lag at your peril – acclimatization is the name of the game

What an exciting way for the players to start 2014 by playing the Tournament of Champions event. It is one of the favourite tournaments on the calendar and there are plenty of reasons why.

Firstly it’s in New York, and who doesn’t love New York, especially as most squash players are known to love a bit of shopping. You then have the venue of Grand Central Station, which is unique and creates a fantastic atmosphere. 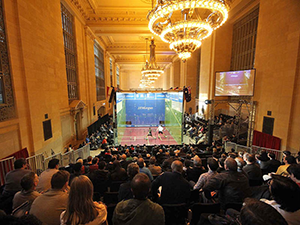 It is great to see the top women competing alongside the men again and I’m sure there is going to be some fantastic squash for the enthusiastic crowd.

With it being the first tournament in January it is a great chance to start the year off with some confidence-boosting results.

For most players competing at the TOC, travelling on Tour will have become second nature in what it entails, but for the younger players starting out it can be overwhelming.

Unlike some professional tennis players, who may have an entourage travelling with them to tournaments, unfortunately squash players don’t have that luxury. So travelling to a foreign country for the first time can be a little daunting with many things to think about.

One of those is the flights. Everyone copes differently with jet lag and sometimes it can have an effect on your game, so it’s important to book your flight so you have adequate time to acclimatize.

Also, if it is at all possible, try to travel with other players. I was very lucky throughout my career that there was a group of English girls who got on really well so we always tried to book our flights together. It certainly made those long flights not so tedious.

You then have the situation of when you arrive at the airport and working out how you are going to get to the courts/hotel. Some tournaments may have an airport pick-up but some may not, so it is important to have that organised.

I had the experience of getting picked up in a limousine in Houston and then another time I landed at JFK and had to book and get on a bus for a three-hour journey to Stamford.

So, what to pack? This might sound an obvious one but it is always best to be prepared for all scenarios. The first time I travelled to Australia as an 18-year-old and being a young English girl I was under the impression that Australia was hot all year round. So, with much excitement, I packed my summer clothes, kit and tracksuit.

When I landed in Melbourne in August (their winter), I got a bit of a shock at how cold it was and spent the whole time wearing my tracksuit. In my defence, this was before the days of the internet so today the worldwide weather is just a click away.

For the younger players starting out there will be many things to get used to besides the pressure of playing in tournaments. There will be the different kinds of courts.

Then eating the different kinds of foods and getting used to the different cultures and customs. My advice is to embrace them all and enjoy the experience as much as you can. These really will be some of the best years of your life.

Pictures courtesy of Sean MacEntee and the Tournament of Champions website