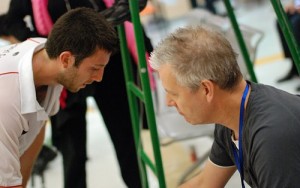 PAUL SELBY, leading coach and head of a British squash dynasty, joins the big SquashMad debate on the use of single-dot balls for youngsters and recreational players.

In response to Richard Millman’s article in support of The One Dot Revolution, the first comment I would like to make is that, like Malcolm Willlstrop, I am a big advocate of using the Double Dot for all junior matches.

Right, let’s look first at the problems we face. The first is having an inferior ball made on the cheap caused by Dunlop switching their production to the Far East from the Wakefield factory when the company was purchased by Mike Ashley of SportsDirect fame.

The ball now is not a consistent product and can vary in its speed and behaviour from ball-to-ball. As an experiment, try rolling the ball across a flat surface and see the inconsistent roll. This is because the balls are not even round.

The Max and Max progress for 4-5 year old beginners is an absolute no-no. Better to use the old red dot so they feel they are like the big kids playing with a proper ball like they do.

My job I feel as a coach of junior performers is to progress them as fast as I think is possible on to the Double Dot (weather and court temperature allowing).

After watching the Under 11 National Championships in Manchester earlier this year I was embarrassed by the patronising nature of ESR in insisting the kids play with a one dot ball.

Most of these kids had been training with double dots and were only told as the ball was thrown down to them by the referee for their first match.

I am happy for kids to train with a variety of different balls in practice to try out different things and see if they can cope with different situations but for serious competition, let’s not dumb down the top kids.

If the less-able kids struggle, then maybe we should look at running a tournament alongside for the improvers where they can use a single dot.

As for the majority of squash players worldwide, the ball to be used must depend on climate and altitude (altitude, that’s right, not attitude).

Squash governing bodies (WSF step forward) should be addressing this issue and making some decisions on a:) Improving the quality of the product we are forced to use (96% of all balls sold are Dunlop). b:) Giving clear guidelines on which ball to use based on certain criteria i.e. Age, Country, Level, Gender, Temperature, Time of Year.

This is a worthwhile debate as we strive to keep players already playing and also entice new people into the game.

And don’t forget UK Racketball. It certainly does have a role in helping to keep players using facilities that may well have struggled and may even have closed without this new addition to aid court bookings.

I am sure my comments will not be welcomed by some, but some others may agree. This is the nature of debate and through it, we aim to reach a sensible, educated and researched consensus.