Gilly Lane: My magic moment on court at the ToC

Guest Contributor January 23, 2014 2 Comments on Gilly Lane: My magic moment on court at the ToC 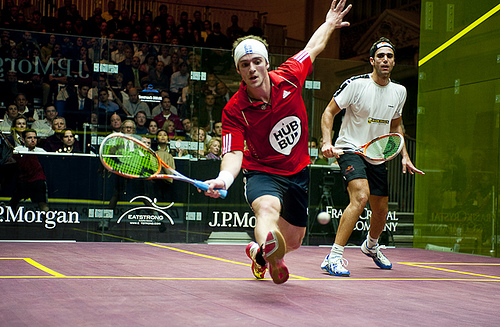 My big moment in the Big Apple: Playing the world number one on the glass court at Grand Central left me a nervous wreck
By GILLY LANE  – Squash Mad Columnist

What it is like playing on the center stage in Grand Central Station? Every night after work I have been tuning into PSA Squash TV watching the live coverage of the Tournament of Champions. It has been said that the TOC is best venue on the circuit right now and all the top players love bringing their talents to the bright lights of New York City.

For those of you who don’t know (and if you are a squash fan you should be punished for not knowing about the TOC), the Tournament of Champions, which has been run by John Nimick for close to 20 years, is played in Grand Central Terminal in New York City.

Millions of travellers step in off 42nd Street and walk by this glass McWIL court every day and witness a sport that they have never seen before. They first ponder what the sport is and then, after 10 minutes of watching intently, marvel at the athleticism of the world’s best players. 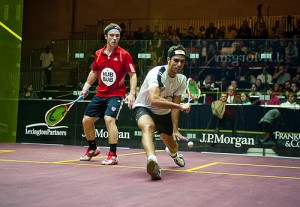 In 2010 I had the opportunity to play in the TOC as a wild card entry. I was closing in on the top 50 in the world and it was the first time I played on the big stage in front of my home fans.

I remember the experience like it was yesterday as I waited for the draw to come out on an early week day morning. In order to find the draw you would log onto the PSA website to find it once it has been randomly selected.

I didn’t have to scroll to far to see my name as it read from top to bottom, Karim Darwish and then my name Gilly Lane. I looked at the time and it said Friday at 6:45. Not only was I playing the current world number one but I was playing him at prime time in NYC.

The day of the match I received close to 50 texts from friends and family saying they would be there in person for the match. I was definitely excited that so many people were coming but at the same time I was extremely nervous.

I remember meeting up with my close friend Scott Devoy around the corner at a bar where he was having a small bite to eat before watching me play. I was shaking as I sipped my water and he tried to calm me down by telling me any joke that he could think of.

When I got to the warm-up area I felt like a tennis player walking on to Centre Court at Wimbledon.

There is an aura around the terminal that only a squash player can describe. I remember watching Rodney Eyles, Peter Nicol, Jonathan Power and David Palmer all compete on the same court that I was about to step on. 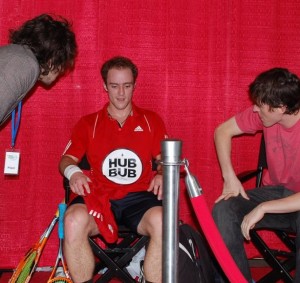 I could hear the deafening cheers of the New York fans as players before me dazzled the packed audience with their frightening ability.

It all hit me at once. It was the fact that competing on that court in that arena means that you had made it. It was the place that everyone wanted to play in and be a part of. It is the magic of Grand Central Terminal.

The first two games against Darwish were a blur, but I took a lead of 9-4 in the third before succumbing to the world number one 11-9. I still hear the cheers from my friends. I still see the smiles on my family’s face as I looked back at them in the crowd.

I still remember thinking, wow, I am playing on the best court in the best venue in the world. Something I dreamed of as a kid had finally come true.