Guest Contributor January 24, 2014 1 Comment on The most interesting person in squash 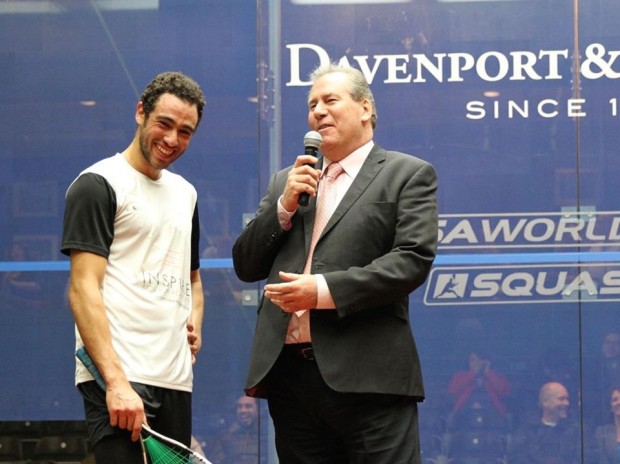 By WILLIAM GENS (Publisher of Squash Dashers and Bashers)

If I was stranded on a deserted island for an extended period of time and had no access to Daily Squash Reports, PSA Live TV or You tube and I was eventually rescued, the one person in the world I’d want to update me on squash would be Alan Thatcher. Aside from his vast knowledge about the game, as historian, player, coach, broadcaster, none rival him. He is squash’s rendition of everyman, guru, Renaissance Man, the Da Vinci of squash I would say.

His broadcasts are so entertaining; his turns of phrases, his insights into the players, his observations about the game never cease to amaze me. You might put him alongside some of the other great sports announcers like Johnny Most of the Celtics, Scully of Saturday NBC Baseball Game of the Week, Tim McCarver of the NY Mets and certainly I would put him alongside venerable Howard Cosell (I loved Cosell). Witty, urbane, with a great sense of the drama and timing, like Cosell, Thatcher seems to be in love with words, with language and the impact good rhetoric can have on something as fleeting and intangible as a dramatic sports moment.

What is even more remarkable is you can just listen to Thatcher do the play by play without video and harken back to the days when sports were broadcast from radio exclusively. This is no easy feat, considering the game is so fast, you have to announce the shots in rapid succession, which means you have to first know what you are talking about and secondly process what you see into words to keep pace.

I posed some questions for Mr. Thatcher recently and the following are his answers:

SDB – You’ve been known for some memorable squash quotes, which ones are your favorites?

AT – “There goes David Palmer, flying through the air like a kangaroo on Viagra (it was a fun way of describing a phenomenal athlete).”

“Jonathon Power …. He’s halfway up Yonge Street, but still gets the let (just to show that I do my homework before every event. I was amazed to learn that Yonge Street starts in downtown Toronto and carries on halfway to the North Pole! Having looked at the video clip again, from a match between Power and Peter Nicol, I think Power actually did enough to deserve the let!) ”

“Happiness is a supple pelvis. Squash and life combined. It is a highly motivational comment when coaching a group of females, especially those in their 40s, who wish to be reunited with their pelvic floors. Me, I’ve had plenty of pelvic flaws. My late brother Mike introduced me to squash in my early 20s (not the 1920s) and I put my pelvis out stretching for a drop shot the very first time we played. I have been suffering from the same injury for more than 30 years! I have finally found a genius osteopath who has sorted out my problems and I am training to be world champion when I am 60 next year!”

SDB – You are a squash coach as well; give an example of your coaching wisdom?

“Get the mechanics right, and the shots are easy (that was my coaching this morning, telling James Evans, last year’s British Under-15 champion, to sort out his lazy footwork while we were doing a backhand volley routine).”

“Leave the court, NOW!!! (Me, last Saturday, talking to a junior who picked up several double bounces.)”

SDB – You’re writing a book on squash, what sorts of things are in that book, can you give us some examples?

AT – “Why do you expect to win a team match, against a fit opponent, when you do absolutely zero training? (From my new coaching book aimed at club team players). “

“Honesty and respect will give you balls of steel. If you pick up a double bounce, or try to gain any kind of unfair advantage on court, you are CHEATING. You have already lost the rally, so give it up and walk away. You have around one to 1.5 seconds between shots (much less if you volley) so honesty will help you to concentrate much better on that next shot. If you cheat, you will know you cheated in five minutes, five hours, five days, five weeks, five months and five years down the line. Do you really want to carry all that baggage around with you? (From the same book). ” 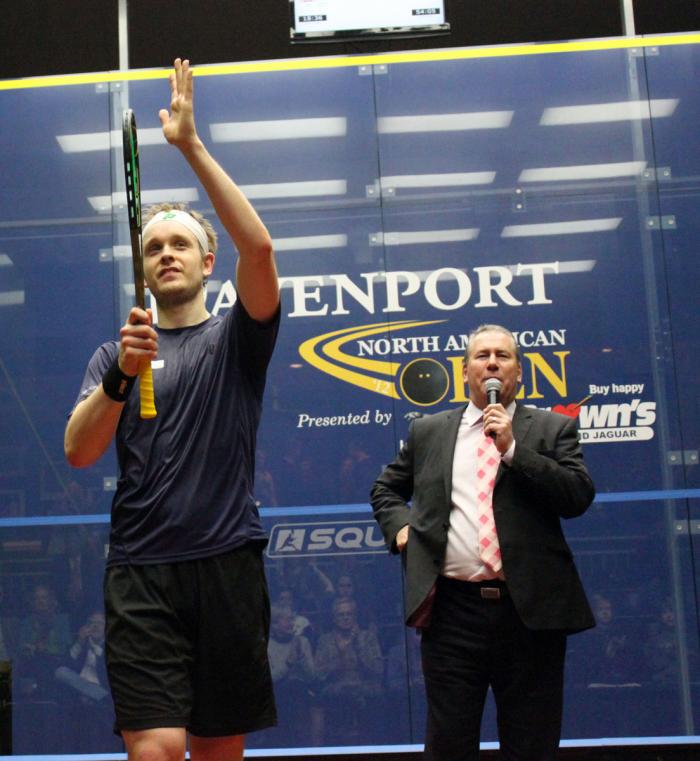 SDB – You are the co-founder of a very noble charitable cause, something that hits close to home. Tell us about it.

AT – TriSports, a community sports club aimed at providing sporting opportunities for disadvantaged (often homeless and unemployed) young people that I launched in Kent with a friend called Stewart King.

SDB – What was the impetus for founding such a charity?

AT – Having grown up in poverty after the Second World War, losing my mother to suicide at the age of 11, and being made homeless at 17 when my father remarried and I was kicked out of home, makes me keen to help any young people with problems in life. Most of the homeless kids I have helped down the years are the product of broken homes and parental separation or abuse. It’s not their fault, but they get angry (understandably), do stupid things and get in trouble. Sport, and especially a game like squash, can help them get fit and healthy, and provide some shape and discipline in their lives.

SDB – What are some of the things people say about Alan Thatcher?

AT – Things people have said to me down the years:

1: I never expect someone of your size to move so quickly (most days)

3; You possess all the athleticism of a dead horse (Toronto doubles opponent).

4: I’m amazed at your lateral movement for such a big guy (New York squash coach).

6: Do you want to give up now? (Much younger Kent League opponent who saw I was injured, tried to dead leg my injured leg and was very surprised that I beat him … on one leg!)

7: Thanks. (A homeless lad, who joined TriSports, got fit, sorted out his life and got a job with the Fire Brigade).

SDB – Egyptian squash: is this squash’s equivalent to sliced bread?

AT – I love the way that Egypt is taking over the squash world. Everyone wants to know the secrets of their system. System? The big answer is: there is no system!! They just have hundreds of talented kids with an army of brilliant coaches who destroy the European “system” of age-group events. The Egyptians don’t really care about age groups. If you are good enough, then go out and win. Age doesn’t come into it. Here in England, our kids spend more time on the motorway than they do on court, driving all over the country to ranking tournaments or trying to find another talented kid to train with. Just imagine turning up at your local club and you can have a hit with Ramy Ashour? Squash is a wonderful diversion for a country going through such turmoil.

SDB – Why do real US squash players have to go abroad to learn the game?

AT – Because it’s not yet in your DNA. All pros need to travel, to learn. Experience and learn from the masters of Egyptian skill sessions and European fitness. Squash is perfect for the American psyche. You guys love the work ethic involved. But there are no short cuts to genius. You are hiring many of the world’s leading coaches, so I think in ten years’ time you will be producing some great players. The USA needs a Jonathon Power, a mad, genius, Mozart maverick who plays the game like no-one else. Then things will really take off. 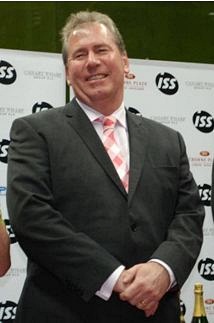 SDB – Who was really the greatest player in the game?

AT – He (or she) will be among the millions of sperm deposited in the welcoming womb of the wife of a squash player on Valentine’s Day this week. Every era produces new champions, and a new champion, of a new generation, will be born in nine months’ time. For me, the greatest champion of all was Jansher Khan. Not only for his astonishing ability, and the way he adapted his game to cope with every new challenge, but most of all for the way he dealt with the hostility from the Pakistani hierarchy when he arrived on the scene as a skinny 17-year-old and announced to the world that he would take down the mighty Jahangir. And he did.

SDB – A lot of people including myself thought Ramy Ashour would be as good if not better than Jansher…what is your take, has he had his time?

AT – I am sure Ramy will come back. He is too good a player not to. He loves the game and people in the game love him. He is too young to write off, as you seem to be doing, but I think he needs to develop a more disciplined approach to his life and career. Being injury-prone is not a good sign. I hope he gets the right treatment and has the right people around him to nurture and protect him. Just imagine Ramy and Jansher playing each other at their physical and mental peaks…. what a game that would be! I would take Jansher to win 3-2… 38-36 in the fifth.

(Note: I could have gone on forever with questions to Mr. Thatcher, but he had to stop and gets some sleep in preparation for the US Open, even Mr. Thatcher needs his sleep. Please key into his web site (www.squashmad.com) for the best of the best of the professional squash world, and tell me he isn’t the most interesting person in squash…)

POSTED BY SQUASH FROM DELPHI