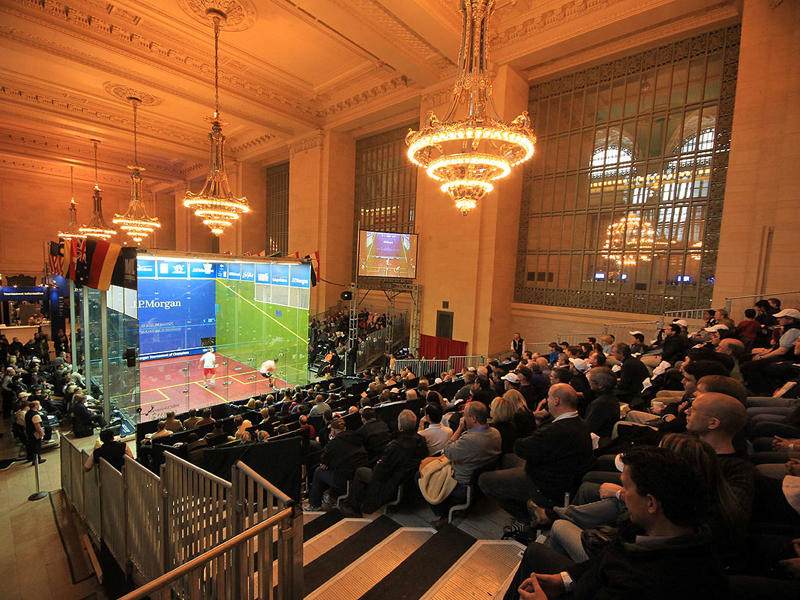 Mind those chandeliers: The McWIL court is located at the Grand Central Station in New York this week

1. David, you were a lawyer before deciding to move into the squash court construction business. What were the key influences that prompted the move?

I was a lobbyist, a word that makes “lawyer” sound benign, and left the law firm to start a farming project (cucumbers) in Puerto Rico, in 1982.  One of my partners embezzled funds and in the hiatus while that hitch was sorted I went to NYC to see a (very) young man named Jahangir Khan take on a couple of the top hardball players – Ned Edwards and Mark Talbott if memory serves, but often it does not!

The catalyst for my redirection from farming to squash was meeting the late Ron Morton, who was JK’s financial manager – the most loveable Scottish bombast ever born. He offered me the rights to distribute the “Unsquashable” brand in the USA and over three decades later I am still here.

The direct link to the court construction business was the demise of the Curzons Group, based in Toronto, and for which I served as VP of Operations overseeing a small nine-club group of fitness and squash facilities. 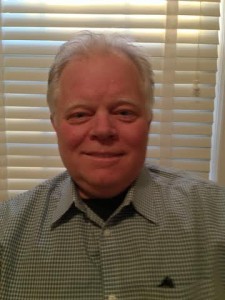 2. You must have been pretty confident that a business was there to be developed?

A dear friend in LA, Mike Wilcox, noting that my nominal “life-base” was in Washington DC, suggested that I utilise his connections and start building squash courts, as he was ill-equipped to do any serious squash court construction work from LA in the early 90s. I imagine “ignorant” (and therefore blissful) was more the operative feeling, not confident.

3. Installing the glass court at Grand Central Terminal for the Tournament of Champions must give you a massive glow of pride?

This is our tenth year at Grand Central Terminal, and while the court in such a venue is of course a great sense of pride, what tickles me more is the opportunity to work year after year with my fantastic crew led by Rod Eldridge and with John Nimick, who if he isn’t the number one promoter in squash, then I cannot imagine who is.

4. Are there any special logistical challenges to the build at Grand Central? I guess those chandeliers would be expensive to replace.

In truth Grand Central Terminal is one of the easier logistical challenges – once you jump the NYPD, the pedestrian traffic on 42nd Street and the drug-sniffing dogs. Our success has been based on the fact that I decided ten years ago to try to solve all the logistical issues so as to be able to offer promoters a turn-key and hassle-free rental.

We own our trucks, container and trailers, all of which are custom-fitted for the glass court and equipment, including sound and visual components. Our trucks have lift-gates, so no one needs to rent a fork-lift – at $500 a day in NYC, for instance. We are equipped such that 100% of our material can pass through a standard 36-inch-wide door.

We don’t go high enough to disturb the chandeliers, but I would love it if we had access to the light switch to shut them off during play. 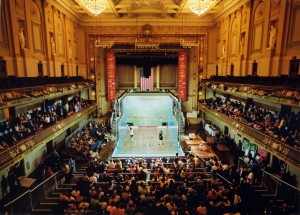 5. How many major events have you supplied the glass court for?

I think everyone we put the court up for considers their event a “major” but the numbers break down simply as 56 portable court events with courts owned and operated by McWIL. [The first event in 2004 was managed in conjunction with a colleague, but every event since then has been 100% McWIL].

In addition we have been involved in two events on permanent McWIL glass courts (Harvard and NSA), four Canadian Nationals, three “Squash at the Symphony” events and three events that were fund-raising activities for junior and urban squash.

We have also overseen the installation of McWIL all-glass portable courts in Canberra, Australia, and Kuwait City for customers. Finally, 50 of the events where McWIL portable courts have been involved have been with PSA and/or WSA ranking events. In total, the TOC 2014 is our 62nd event in less than 10 years.

6. Which ones stand out the most in terms of being able to showcase the sport in the most dramatic fashion?

Aside from the blatantly obvious TOC at GCT, I think the US Open in Millennium Park, Chicago, and more recently – and regularly – the Netsuite Open on the Embarcadero in San Francisco stand out in my mind.

7. You must be pleased to see Chicago back on the calendar this year. Please tell us about how your court stood up to a hurricane a few years back.

The crew and I are all pleased to get back to Chicago, but again, it is the people more than the town that make it a great experience. John Flanigan is a guy who attracts the allegiance of good folks, and when we pull up in Chicago we get to bask in that aura and enjoy what is in fact our most complicated logistical hurdle of the year.

The court goes into the ninth floor Cathedral Hall, which as the name suggests, has a very high ceiling, but it’s on the NINTH floor for Pete’s sake! And no freight elevator! The University Club team of engineers led by Marty Keane all put a shoulder in and it works.

The hurricane experience back in 2008 was a real threat. The court was outdoors in what seemed like a protected plaza, but the wind just accelerated through the adjacent office towers and clawed at the court.

Amazing that while roof beams came down, no glass was broken, although we did have to replace the floor at no small cost. 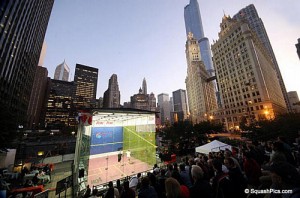 8. You built the first all-glass doubles court at the Power Academy / National Centre in Toronto. Were there any special technical elements for that project?

The only technical hurdle was getting the glass panel sizes right, and we seem to have done that first time out. I was on site for the first pro event and when I saw those guys wind up I was worried.

I sat behind the tin and the glass was literally vibrating, but it continues to stand up to the pounding. Kudos to Gary Waite for having a vision and letting us ride to the finish line with him.

9. The USA is now the biggest squash market in the world, with more than one million players. That must have represented a significant number of new court builds in the past ten years…

There are several options for folks wanting to build squash courts here, and I think that the several builders each have somewhat different orientations.

I made a decision some years back to go after any squash court project we were offered to quote on, but to focus on projects where the courts were most likely to benefit juniors or be in facilities where anyone can try the game.

Even 25 years after the softball game got its foothold here in the States we are regularly converting racquetball courts that open the game up to new players. 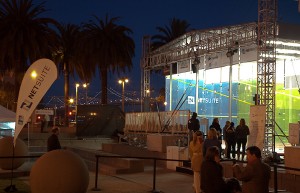 The McWIL court in front of San Francisco Bay bridge

10. In terms of growing the sport in a sustainable fashion, what kind of squash club works best, in your opinion?

Squash is a bit of a conundrum, as it is a very individual effort (doubles aside), but it gives rise in all participants to a wonderful camaraderie, the result of which is a fantastic combination of self-achievement and social interaction and enjoyment in almost the same time and space.

What I believe is absolutely critical to a successful squash club is a good “Pied Piper,” a pro or program leader who can provide guidance and encouragement to all, as squash is a tough grind if one wants to maintain any self-esteem.

It is as easy to ingrain bad habits and strokes as it is to get adept at good ones, and sometimes we humans don’t know the difference – forest-for-the-trees and all that.

In order for a club to support a pro it has to have a minimum of four courts, and preferably six if the catchment area has enough young players and is close to home and office such that “nuts” – the term for anyone who plays squash long enough to get the bug – can play their desired three-plus times per week.

I think squash can easily get lost in the large fitness facility mix, and while some companies like Life Time Fitness are making a serious effort to provide a platform for squash, it works best in a squash club.

The finances are tough, but with some additional activities where there is good synergy with squash and the need for modest square footage, a package can work. I am thinking yoga, Pilates, spinning and personal training.

11: What’s the most fun you have ever had at a squash tournament?

It has to be the World Open in Toulouse in 1986 when Jahangir Khan lost his five and a half-year unbeaten run to Ross Norman, the final with the wobbly ball.

Giant lattes and fresh croissants every morning with PSA boss Roger Eady, fantastic squash in the Stade de Sport, every player running on to the court to the accompaniment of the “Rocky” theme tune, the hilarity of Ricky Hill and Tristan Nancarrow, and so many others. The Good Old Days.