SQUASH star Chris Simpson appears on the BT Sport Channel this weekend. In a new series, BT bring together athletes from two different sports, and Simpson was filmed with British tennis No.2 Dan Evans at the West Warwicks Club.

Simpson, the PSA world No.24 from Guernsey, now based in Harrogate, enjoyed the experience and looks forward to tuning in to the BT Multi-Sports show being broadcast on Saturday morning.

Chris told Squash Mad: “It was a short piece, around three and a half mintes, that I filmed for BT Sport with Dan Evans. It’ll be going out as a feature on their multi sports show on Saturday morning.

“I tried tennis first; I can hit a ball alright but haven’t played much tennis before. What I didn’t know until we went on the squash court was that Dan has been playing squash since he was eight, and is a very good player!

At one point I demonstrated a straight drive, only for him to better my demonstration first try! “All in all it was a fun afternoon. Hopefully the piece in the show will come across well and give some good exposure to squash.” 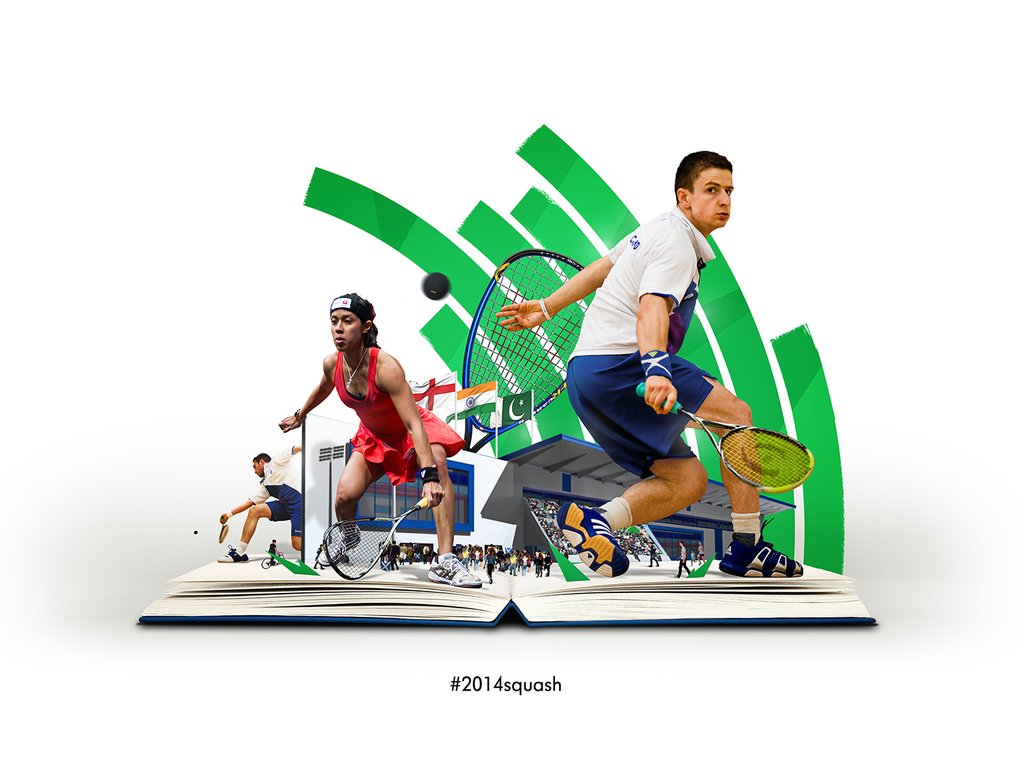 Three great pieces of artwork have landed on the Squash Mad radar this week. And two of them feature Scottish No.1 Alan Clyne! First of all, a very impressive graphic for the 2014 Commonwealth Games flagged up the news that tickets are now on sale for the squash events in Glasgow next summer.

Clyney is pictured whirling that unique, Braveheart-inspired, claymore swing. Women’s world champion Nicol David is in the background, wisely keeping her distance from the follow-through. There’s only one problem, though. The graphic shows Nicol as a left-hander! Oops! Maybe they’ve asked her to play left-handed to give the others a chance. Or maybe some graphic artist thought it would be a smart thing to do, to flip an image without understanding the ramifications.

The same thing happened a few years when a paper mountain of posters arrived from England Squash, with Vicky Botwright dramatically changed to a left-hander. Congratulations to Nottingham Squash Club for their inspired creative work to promote their PSL team. Using the theme of Sherwood Forest (or is it Nottingham Forest?) they have superimposed images of the players in action on a backdrop of a sunlit wooded glade.

The banner, produced by the Three Rooms agency, again shows Clyney in swashbuckling style. It’s the kind of attack that helped him to victory over Aussie No.1 Cam Pilley last week. Just one thing: with this kind of campaign in progress, I’m surprised Nottingham didn’t try to sign Simon Rosner, known as the German Tree Chopper because of his lethal forehand swing. Instead, Rosner is playing for London club Coolhurst.

Our third, celebrated piece of artwork, shows Nick Matthew in action on the BBC Question Of Sport programme, which he filmed in Manchester. Shame that Sue Barker’s BBC colleagues in Salford failed to understand that a three-time world champion in a brutal sport like squash really should merit a place on their Sports Personality Of The Year shortlist. IF YOUR CLUB or event is creating some special squash artwork, please let us know. Just remember Rule One: Do not flip those images!

Joelle had a fun day, being part of the team roaring into Auckland Harbour in a power boat to deliver the baton, along with runner Nikki Hamblin. The baton is being carried on a four-day tour throughout the country as part of a Commonwealth Games tradition in the lead-up to the 2014 competition in Glasgow, Scotland.

The baton will travel to Wellington for a formal reception at Parliament on Friday before it departs for Dunedin to feature in St Andrew’s Day celebrations on Saturday. The Queen’s Baton relay began its 19,000km journey around 70 nations and territories in October and arrived in New Zealand from Samoa. The Commonwealth Games take place from July 23-August 3 next year.

Nick Matthew exclusive: ‘Coaches who try to influence referees should be banned’