English racketball is a whole new ball game in the States

Guest Contributor January 24, 2014 1 Comment on English racketball is a whole new ball game in the States 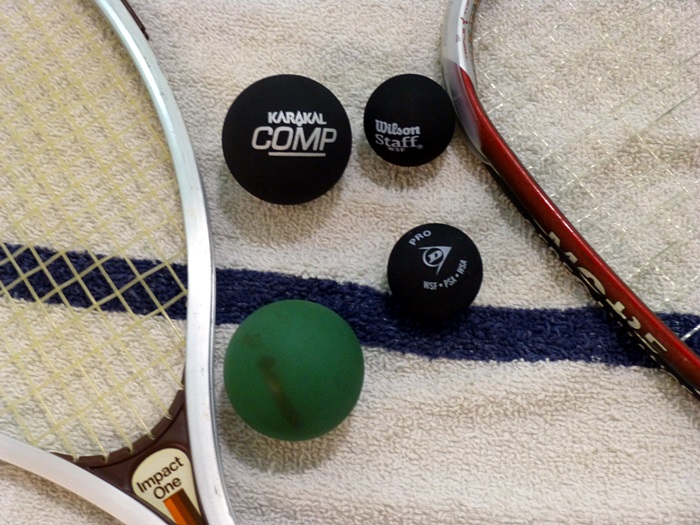 On the ball: Americans are trying out the English version of racketball … and loving it!

Americans are loving the repackaged version of English racketball

I’m a sucker for equipment innovations and hybrid racquet sports, probably because I have played so many of them and excelled at so few. So when I read Richard Millman’s Squash Mad story about how English racketball helped him rehab his knees, I was curious to try it out to see how it compares to squash and the faster and more familiar game of racquetball.

Ted Gross from our friends at Daily Squash Report persuaded Karakal to send me some racketballs, I watched a demonstration video to familiarise myself with the rules, and I ransacked my attic for old racquets and balls.

I came up with an Ektelon racquetball and a couple of racquets – one of them ten years old and the other an indestructible vintage 1970s Voit Impact teardrop model to add another oddball ingredient to the experiment.

Then I headed for the squash courts at nearby Rhodes College. Memphis actually has a place in court sports trivia history.

Some 40 years ago, U.S. handball champ Paul Haber played U.S. racquetball champ Bud Muehleisen in a “Hands versus Racquet” challenge match at the University of Memphis in front of a few hundred fans, many of them laying wagers. (They played with a handball, and Haber won 2-1 after losing the first game.)

My playing partner, Shubho Banerjee, teaches physics at Rhodes and, like me, played a fair amount of racquetball several years ago.

Neither of us had ever played racketball, which we dubbed “K-ball” to avoid confusion. We warmed up each of the balls and tested them by dropping them from a height of six feet.

For those unfamiliar with the sport, bear with me. Racketball is played on a squash court with a racquetball racquet and squash rules and lines, except you have to bounce the ball to serve and you get two serves, which seems overly generous.

Racquetball is played on a longer, narrower court without a tin, and the ceiling is in play. At the pro level, points rarely last more than five or six seconds.

But the slow ball stayed up longer so my 64-year-old knees were able to get to a few more short ones. It was easy to hit back-wall boasts, even with the tiny Voit racquet, much less the jumbo modern racquet.

We even played several points with our squash racquets and found they worked well enough, although I felt some soreness that night. (“More force transferred to the arm,” Shubho explained.)

The K ball is slower than the blue squash “beginner” ball. Needless to say, in a town with about two dozen squash players total, neither ball has caught on here, nor are they likely to.

Then we went upstairs to the racquetball courts. We started with the Ektelon racquetball, which was crazy fast even with our rusty skills. Then we switched to the K ball with modern Ektelon racquets. We agreed it was a better game.

Neither of us could make a ceiling ball come all the way to the back wall on the first bounce, which is a common strategy in racquetball with a “q”. It reminded me of playing paddleball in Ann Arbor in 1968 with a wooden paddle and a ball with a pin hole in it.

If I were the American racketball czar, I would order that it be played with slow balls and smaller, seventies-size racquets. Fat chance. England and some other European countries apparently have a surplus of squash courts and aging players, leading to the racketball innovation.

The U.S., on the other hand, has a surplus of racquetball and tennis courts and a small number of squash courts in most states. The most popular hybrid for seniors seems to be pickleball, with a paddle, a small indoor or outdoor court, and a hard plastic ball.

To each his own, or her own. My ambition is to invent a hybrid sport involving Voit Impact racquets, squash balls of my choice, rules I invent, and players of my age, demographic, and fitness profile. The elusive national championship is within my grasp.