Japan’s young duo of Ryunosuke and Satomi Watanabe successfully defended their national titles in Yokohoma on 25 November 2018. Ryunosuke won his fifth successive title while Satomi defended hers for the first time. The All-Japan Squash Championships, as it is called locally, was being staged for the 47th time, but with a twist this time round.

What made it special and different this year was the fact that the semis and finals matches were played in the newly acquired all-glass court erected at the Lyon Plaza of Tressa, a popular shopping mall in Kohoku, Yokohama. It is the first time ever for Japan to have a showcase court in a public venue. With an average stream of 30,000 visitors to the mall on a regular weekend, it was a good way for the sport to get publicity in the land of the rising sun.

Ryunosuke Tsukue, who had his 5-year winning streak in Japan broken last summer when he lost to Tomokato Endo, regained his winning ways and avenged that defeat. Despite being the lower ranked player at 239 in the world, Ryunosuke has always remained the favourite for the title and he justified his top billing with a four game victory in the final. 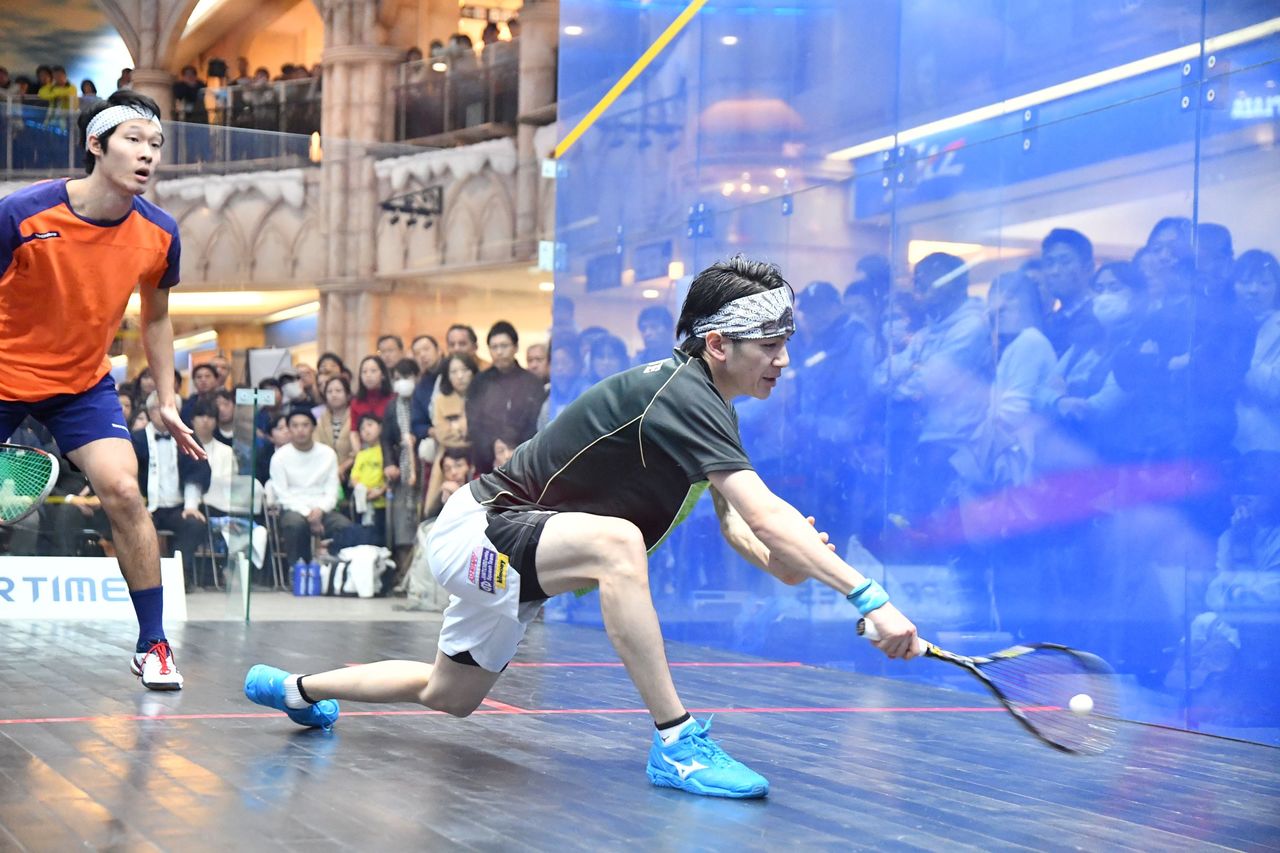 Ryunosuke Tsukue (r) was in his element, avenging his defeat to Tomataka Endo last summer.

21 year old Ryunosuke, who first won the title in 2014 as a 17-year old to become the youngest ever champion, said after his win:

“The desire to defend the title (this time round) was much stronger than the previous years (after my loss in Japan last summer). I am just relieved (I managed to get the job done) and especially grateful for all those who supported me.”

Despite the loss in the final, it was a good showing for Tomotaka. Apart from beating Ryunosuke last summer, he’s also had a great year on the professional tour. He made history in October when he won the Q Open in Australia to become the first ever Japanese winner of a men’s PSA World Tour title. Unseeded, he had taken out top seed Evan Williams ranked nearly 100 places above himself, in the semis before securing the title by ousting Robert Garcia of the Philippines. 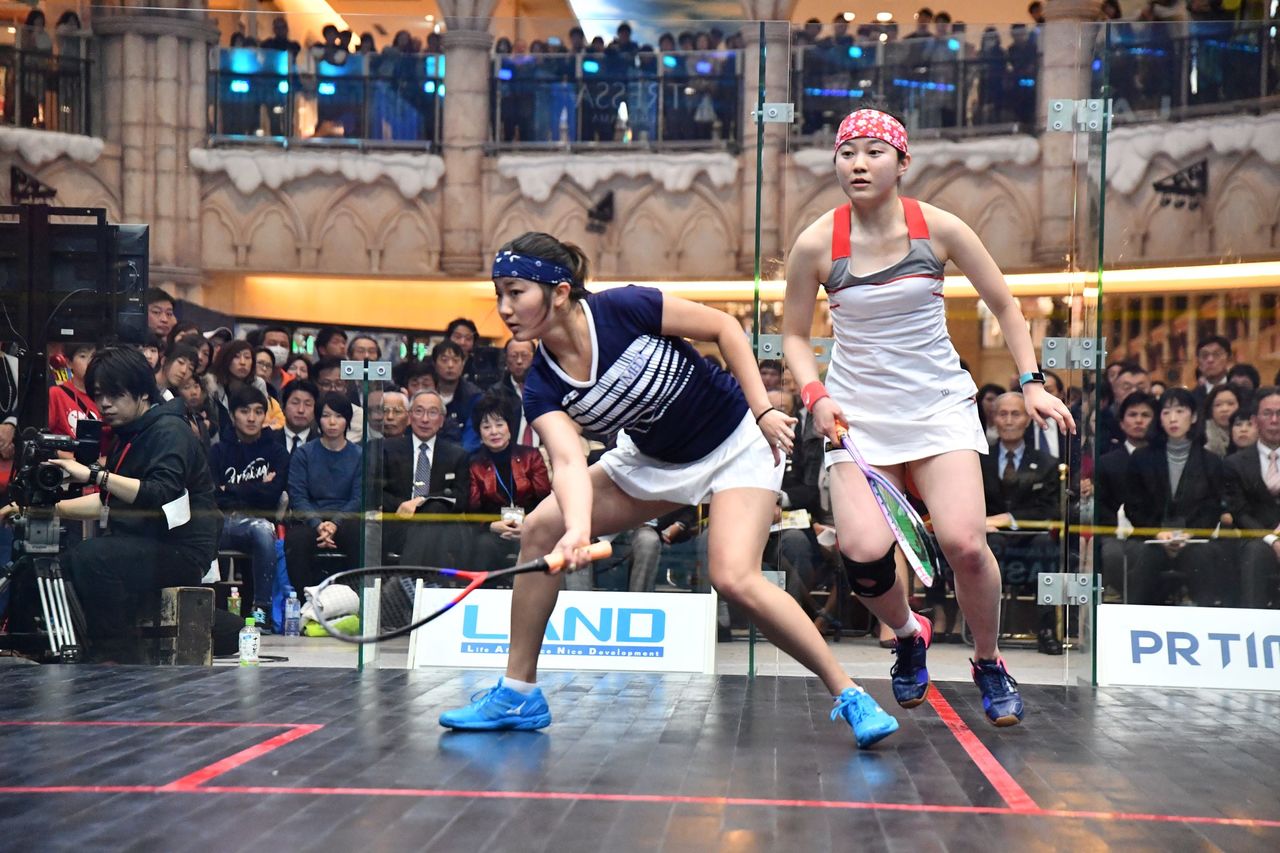 Satomi Watanabe (l) is just a class above the local competition in Japan.

In the women’s event, Satomi Watanabe, Japan’s new wonder kid on the PSA World Tour, was simply a class above the competition. Satomi was dominant and never dropped a game the entire week and never more than 3 points a game up the semi-final. Given her dominance in the women’s game locally and her young age, one can expect many more title to come in the coming years.

“Last year my goal was to win the title for the first time. This time round, it was to defend it. I am very happy that I made it happen. It’s just extra special having done it in this glass court in front of so many people,” Satomi said of her win.

Japanese icon, Misaki Kobayashi, who recently retired from the PSA World Tour, was on location too. However, she was never on court, but behind the microphone commentating on the matches for local Japanese television. She shares a few thoughts of her experience, the winners and the event itself:

“Watching from outside, I felt nothing. I did not feel like I wanted to be in there playing, which makes me feel like I made the right decision to call it quits.”

“I think both Ryunosuke and Satomi can be successful on the PSA tour, but a big part of that lies within themselves. We do not have a great training programme here to support full time players. We are lacking facilities, expertise and even sparring partners. If they want to do well, the only way I foresee that happening, is for them to come out of their comfort zone and be based out of Japan.” 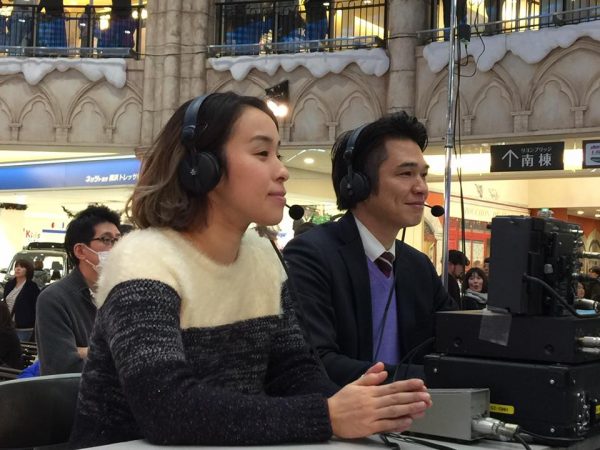 Misakı Kobayashi (l) was enjoying the view from the outside this time round.

On Ryunosuke, Misaki said that while he might not have had such a colourful junior career as Satomi, she feels the boy is special.

“Given the level of squash he is playing just from training in Japan, it’s unreal. He is also a smart player, as he seems to know what he needs to work on without the need of someone telling him”, she adds.

“The Japanese nationals was a great success without a doubt. Of course, there is a lot of room for improvement and I hope they will continue to do better each year. Having the all-glass court in the mall was an eye opener not only to the public, but it is something nearly surreal to us players as well. We’ve never had such a thing in Japan, so that was a big win.”

At the point of publishing, Misaki Kobayashi had just gotten engaged to Neil Cordell the previous evening. The SquashMad team would like to wish both Misaki and Neil a big congratulations and a happy life together.