PSA chief executive Alex Gough (above left) has been reported to England Squash over allegations that he swore and aimed hand gestures at top ref Malcolm Whiteley.

Gough clashed with the official (pictured right) during Tuesday’s Premier Squash League match at Surrey Health as he played for Team Chichester.

On a night of high drama, Gough is accused of calling the Sussex based ref a ‘Fucking Wanker’, proferring an abusive wrist gesture and claiming:”It’s because of people like you that squash didn’t get into the Olympics.'”

Match Referee Co-ordinator Mary Scott Miller has now sent a full report to England Squash, including three witness statements from squash fans who say they saw and heard the incidents. Her report will also record that the 90-strong crowd was made up of a significant amount of children.

Gough, a former world ranked No.5 player, last night denied swearing saying : “He was upset with me speaking to him.I categorically did not swear at him.”

Gough and the official locked horns during his match with Surrey’s Ben Ford (above).

Whiteley last night gave his version of events:”At five all in the first game I called a couple of lets that Mr Gough felt should have been strokes. He obviously wasn’t happy with those decisions.

“He opened the door, stepped out and said “Do you actually know the rules of squash?”. I could and possibly should have given him a conduct stroke but decided to give him the benefit as it was early on in the match.

“In the second game we had similar issues. Ben appeared happy with the decisions but again Mr Gough opened the door put his head out and said

“It’s because of people like you that squash didn’t get into the Olympics.”

“I admit I was extremely angry with that comment, I felt like ripping my shirt off and giving him a slap. But that was a momentary emotion. I have worked hard to become a good referee and calmed myself quickly and ensured the game went ahead.”

Shortly after that flare-up came the alleged incident of swearing and hand gesturing.

Whiteley continued:” Out the corner of my eye I saw Mr Gough put his hand high on the back-wall glass appearing to wipe sweat from his hand. The crowd then erupted and many people told me he called me a “Fucking Wanker” with the appropriate wrist action. They said it was disgusting although I  couldn’t be 100 per cent sure  what was said and done.

“I couldn’t take action if I was not completely sure. Everyone else saw it but I wasn’t totally sure so I had to continue with the game. Maybe he was being clever doing it while I was not looking at him. He knows all the tricks.”

Gough lost the match 3-1 and shook the referee’s hand at the end. “He also repeated that it was people like me who cost us the Olympics, “added Whiteley. “He also said, I’ll talk to you later.”

Whiteley continued:” When I spoke to him he told me I had mis-interpreted his words about costing squash a place in the Olympics. I told him there was no mis-interpretation. He said it as clear as anything. When I confronted him he couldn’t look me in the eye. He just looked at the floor. It told me a lot about him.

“He said he didn’t swear but I told him I had at least three witnesses who said otherwise. He then said he had just come from a meeting with Sky and BT television. He said they would not be showing as much squash on TV because of the amount of lets in squash and that was the point he was trying to get across to me during the match.

“Mr Gough may have had a bad day at the office but I do this job out of the love of the game. I am unpaid, travelled from Sussex and gave up my evening.”

Whiteley then revealed that he had film footage of the incidents. “My wife Julie filmed the match on her phone.,” he added. “It is all captured on there. Mary Scot Miller has already sent a full report, including witness statements, to England Squash”

Mr Gough commented:”I spoke to Malcolm afterwards and asked to see the video/

“I categorically did not swear at him and he wouldn’t show it to me.

“When I came off court I said to him that I’d like to tell him a story of what happened that day at a meeting with BT Sport – I have no idea why he thought I abused him!  When we did speak after the conversation it was not a great one so I am not surprised he is trying to make a meal out of this.”

Surrey Health team manager Pete Smith spoke to SquashMad.com confirming that Whiteley was visibly shaken after the confrontation. “It was all very unfortunate and left people quite shocked,” he said. “I don’t really want to comment on what happened. I didn’t hear it myself but I was told by everyone afterwards. This had nothing to do with my players.”

Smith also confirmed there were children courtside in ear-shot of  the incidents. “We had 80 to 90 people in the crowd, including a lot of kids. It was pretty upsetting.”

Other witnesses spoke of their shock at hearing a senior squash executive unload on an official. “Malcolm was stunned by Gough’s outburst, ” said one male squash fan who gave us his name but asked that we not report  it.

“At one point I think Malcolm wanted to stop marking the game but he carried on. His wife Julie was really upset by it. She may have been filming the incident on her mobile phone, I’m not sure.”

I want to be absolutely clear about this:-
·         I did not swear at the referee;
·         I did not make rude hand gestures to the referee;
·         I did not say it was people like him that were responsible for us not getting into the Olympics.
Whilst I didn’t agree with some of the decisions the referee made, I don’t think Ben did either (seeing as he opened the door more than I did).
BT Sport had told me, only that day, that they had a problem with televising squash because there are too many lets, I think they have a point! (No pun intended).  Its an issue that I believe those of us who passionately want squash to have wider appeal ought to address.
Be that as it may; its totally inappropriate for a referee to make false public statements about me. 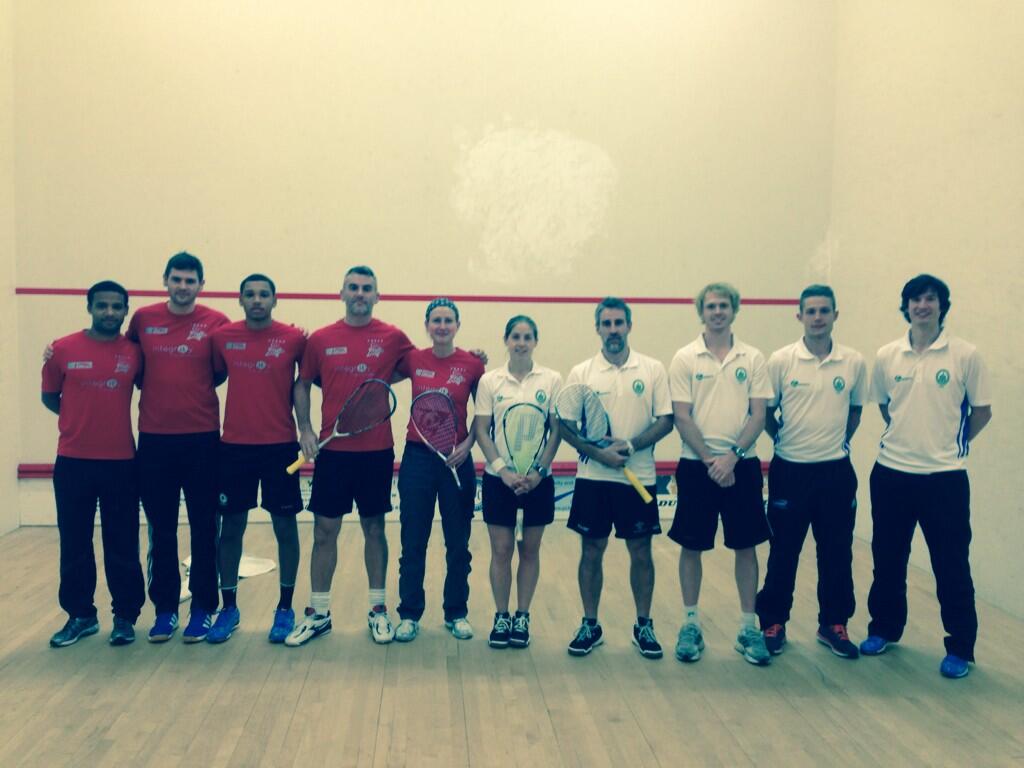 Pictured above: Gough (4th right) and the Surrey Health and Team Chichester teams

Farag returns to the top of the men’s rankings after his night of magic at the Museum  By ALAN THATCHER and ELLIE MAWSON Nour El Sherbini...
Read more
Interviews

‘Such extraordinary kindness from so many people helped me to focus on something positive in life after escaping from Kyiv’ By ROSANNA RADLINSKA-TYMA – Squash...
Read more