Alex Wan November 9, 2019 No Comments on More Qatari joy as Abdulla Al Tamimi betters own record by making it into last 16 of World Champs

Abdulla Al Tamimi rewrote his own history today when he broke a record he made barely 24 hours ago at the Khalifah Tennis and Squash Centre in Doha. After being the first Qatari to reach the second round of the World Championships, the 24-year old played brilliantly once again to oust yet another Frenchman Mathieu Castagnet to make the last sixteen.

The manner in which the Qatari number one carried himself through the match was commendable. Save for short lapse of concentration at the start of the third, he was disciplined throughout the match and kept errors to a minimum for most parts of the match.

While it was a straight games victory, it was by no means an easy win as Mathieu, a former world number 6 back in 2016, is known to be a work horse on court. The 32-year old was going point-for-point with his younger opponent and drew first blood when he got to game ball at 10-9. That was duly cancelled out with an attack off the serve into the front forehand corner. Abdulla then crafted two nice rallies and finished off the first game much to the delight of the crowd. 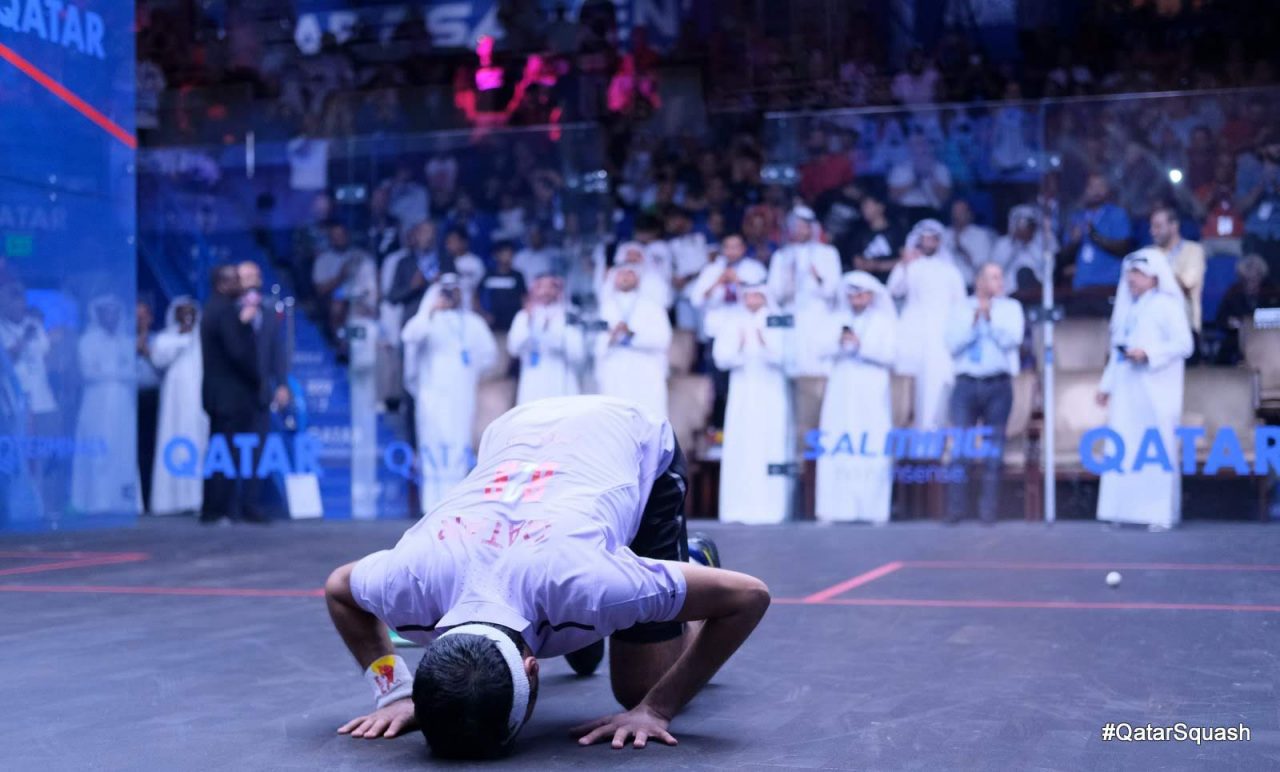 The next saw Abdulla coming back from 0-3 down and turning it around for a healthy 2-0 lead. In the third, he seemed to have lost a little concentration and went short a little too early. He managed to regroup however, was a little more patient and finished off the match with a beautiful backhand volley that sent the crowd into a frenzy. Abdulla dropped his racket, raised both his arms to the crowd, before dropping onto his knees to kiss the floor. 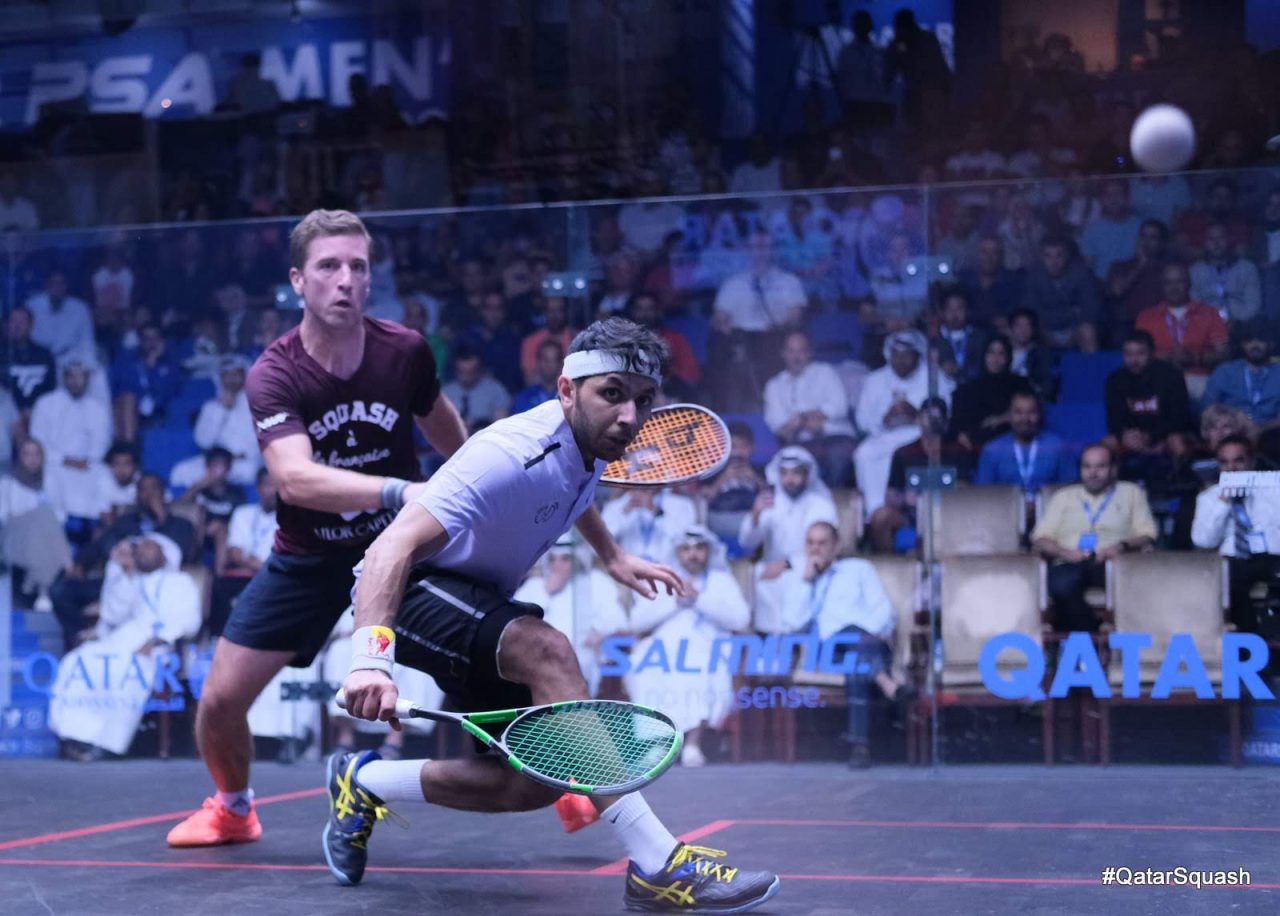 “I was definitely not as relaxed as yesterday and in fact, I was a little nervous at the start. I was glad I managed to get that out of the system and I had to play really well to beat Mathieu in three. I thought I played really well again and I definitely wasn’t expecting such a performance today.”

“After every rally, from the first point, they were jumping and cheering from their chairs. I was trying to really focus on the match so I wasn’t really looking outside. After the match, I saw my family and friends who I didn’t realise were there. I’m really looking forward to see them again on Monday”, Abdulla added when asked if the crowd helped push him today.

Earlier in the day, the German tree chopper Simon Rosner was first to book his place in the last sixteen after seeing off the tough challenge of Englishman Declan James in a lengthy 70-minute battle. The performance of James today was a stark opposite of yesterday as the 26-year old matched Rosner for virtually the entire match. 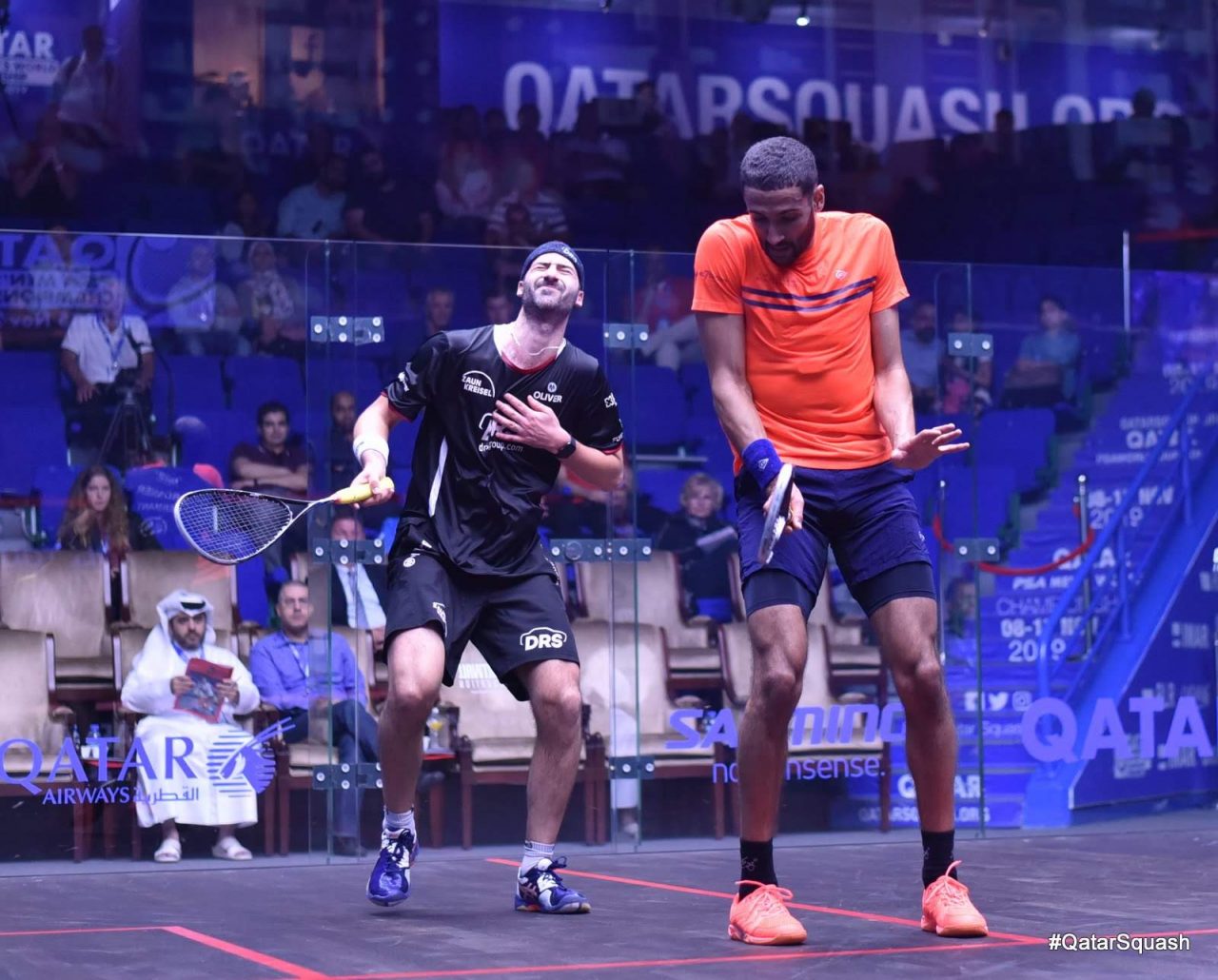 An awkward moment in the match between the tallest players of the day, Simon Rosner (l) and Declan James

Rosner clinched victory 11-9, 9-11, 11-8, 11-9 and said: “It was a tight match. I think we both played really well and I’m certainly very happy with how I played. I didn’t have the best results the last few weeks, so very happy to get off to a good start here at the World Champs. It’s never easy playing Dec – he’s just as tall and loves to volley a lot. I am happy to have won the crucial points in the three games I won. Just glad that I got through.

“I’ve not had the best results here before last year. But overall I am having good memories of this place after getting into the final here a year ago. So, it’s always good to have these positive memories about a tournament and that put me in a good spirit coming into match today.”

Next up was Welsh number one Joel Makin who was made to slog for 74 minutes in the longest match of the day against Egyptian challenger Mohamed ElSherbini. Makin, who mentioned he had never played Mohamed before and that he was wary of his skills and even more so on a dead court, got off to a flying start to lead 11-3. But that turned around in the next game as Mohamed drew level.

The third and fourth were close, with Joel taking the match on an awkward final point on the tie-break where Mohamed had asked for a review but the pair had shook hands before the referee responded. The appeal for a review was not allowed. 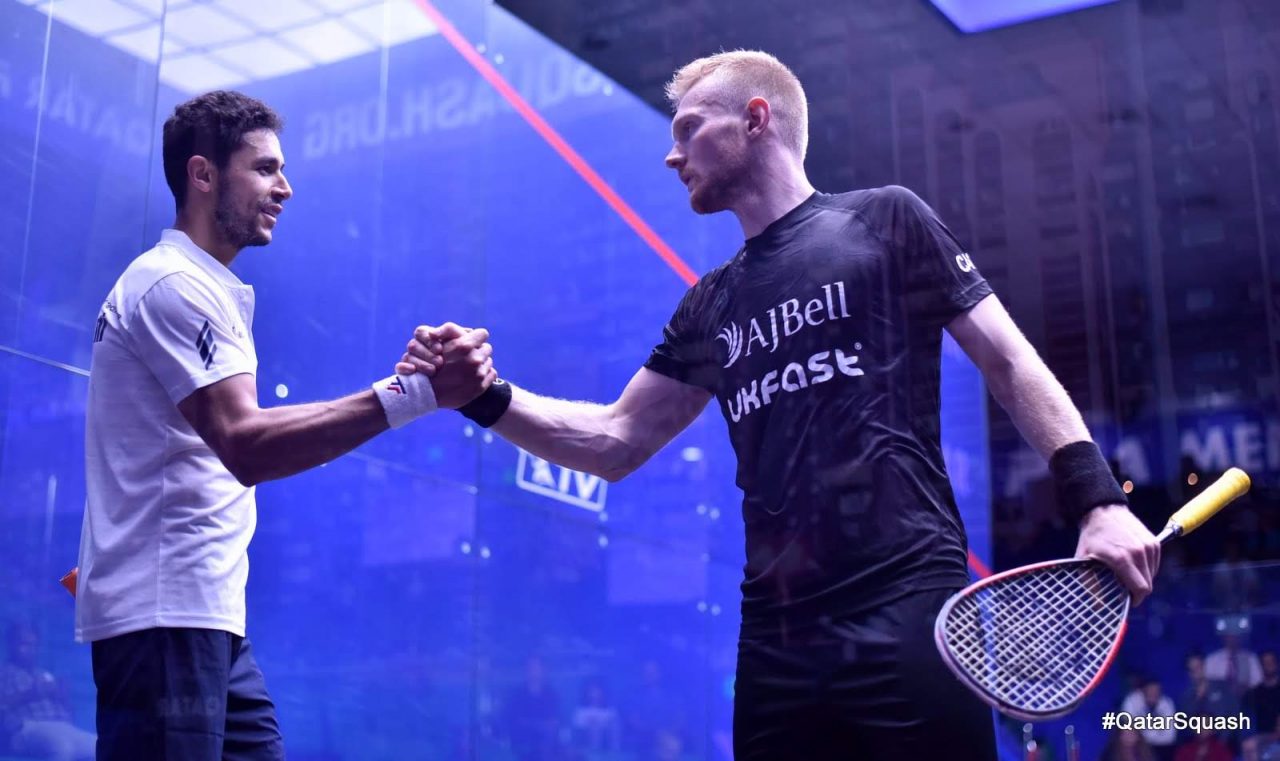 James Willstrop ensured English interest in the last sixteen after stopping the run of Egyptian Youssef Ibrahim. The lanky Yorkshireman won in straight games and while their score line might suggest otherwise, it was quite competitive. James was also aided by the fact that Youssef was not as match fit as he normally is.

Having rolled over his ankle the day before in his match against Daryl Selby, and judging from the way he was hobbling away in the morning, it was a surprise he managed to complete the match. 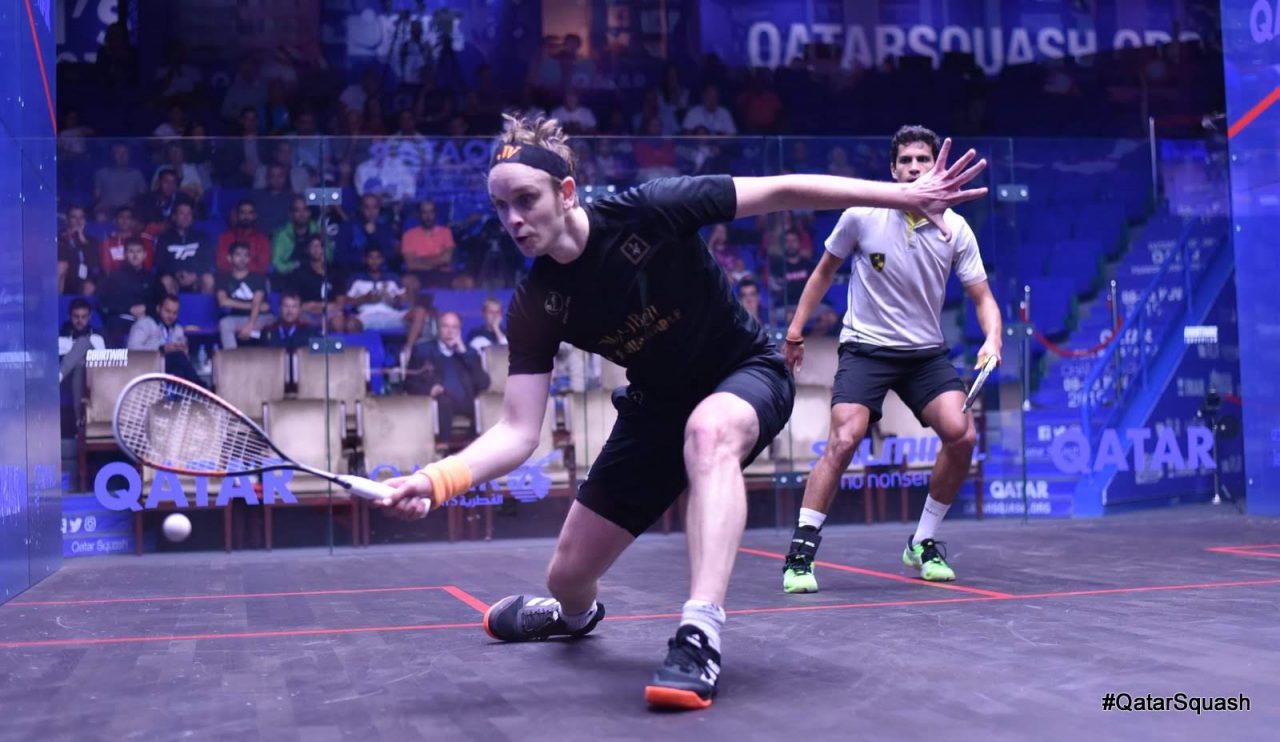 “It felt pretty intense in the head. It makes it almost harder to play him. I really didn’t know what level he would be, if he would compete halfway or at all. I just didn’t know what to expect. I just had to get him moving and it was very hard to do that – I couldn’t really do it for a lot of the period of the game. I just tried to keep the intensity on and challenge his movement.

“If you’re not careful, you start thinking about all that and not think about the match, you can get into a very dangerous situation. You just have to attack it very mentally and strongly and I think that is probably how I came through this today”, James said when asked how he felt playing an injured Youssef Ibrahim.

Karim Abdel Gawad also got through today, but was truly tested by the acrobatic retrieval skills of Mexican Cesar Salazar. While it may easy to blame his notorious slow starts for losing the opener, it wasn’t the case today as Cesar was particularly lethal at the start when he had a fresh pair of legs. Every winner that the baby-faced assassin tried to put away, he was always, or almost there each time. 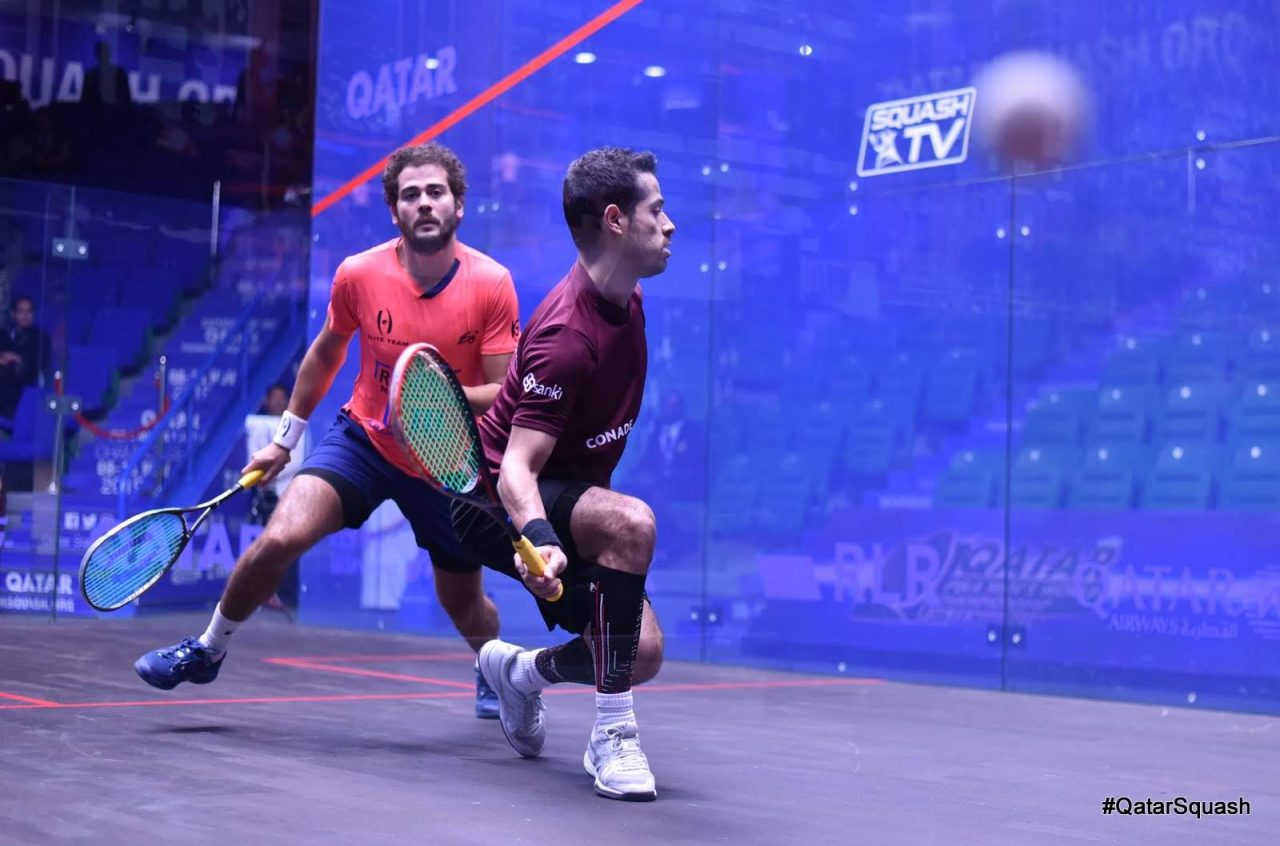 “Cesar is one of my best friends on the tour. It’s always tough to play a friend and you have to leave your feelings outside the court. He’s always a very tough opponent for me and he played really well today. I couldn’t see his shots very well in the first game. We both played very clean and it was a good win for me”, Karim said after his hard fought win.

Sixth seed Diego Elias edged Greg Lobban in a thriller that could’ve gone either way. It has to be said that the Scot played well above his usual self to trouble the Peruvian Puma and in fact, looked the better bet to finish strong. But at 4-3 up in the decider, his backhand short game had deserted him and a string of tins into the same corner saw him gave away eight points in a row in a disappointing finish.

“It was a really tough match,” Elias said. “Every time we play, we go to five games so I had that in my mind. I started playing better as the match was going but in the first game, it was hard for me I then started to move faster and play better and I am happy I got the win.” 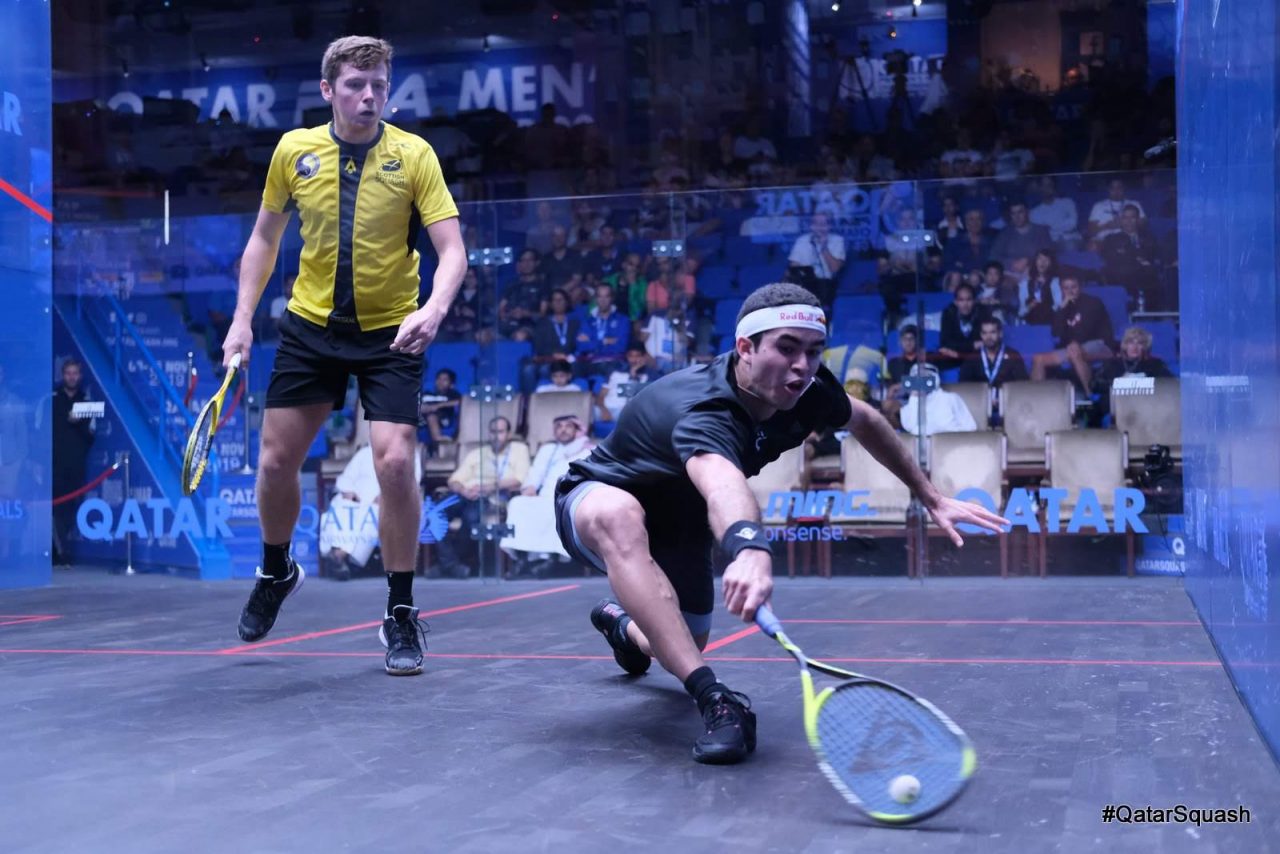 Egyptians Tarek Momen and Fares Dessouky were the last two to go through after they won in straights games. Tarek won against the tricky Mazen Hesham in 35 minutes while Fares had a much easier time against Spaniard Edmon Lopez in the shortest match of the day.

“Mazen is a very tricky and he is arguably one of the most, if not the most talented player on tour. It’s always tough to go into a match knowing you can play your best squash and carry out your best game plan and just lose out to his ridiculous winners. So, I’m very pleased to get through this in three games. I think the first two games, they were highly contested and could have gone either way. I’m glad I managed to close out those two and fly away with the third”, a relieved Tarek said.