While Squash looks forward, with new generations enjoying this great sport and new champions crowned on the latest club and showcourts, the sport also has a long and rich heritage.

Being passionate about preserving this extensive history, Andrew Shelley is launching the World Squash Library (WSL) as an independent ‘not-for-profit’ initiative to ensure that books, magazines, championship programmes, results, images and other information can be brought together in one place to respond to enquiries from current players, media, federations, students – simply anyone wanting information on the long or near past.

“I believe that our history must not only be easily accessible now, but safeguarded for future generations,” said Shelley (pictured above), who recently concluded his term as CEO of the World Squash Federation.

“By giving my time and energy to develop and manage WSL, I am able to give something back to the sport that has given me so much.”

The Library will be housed at the Walker Ground in North London, home of Southgate Squash Club. 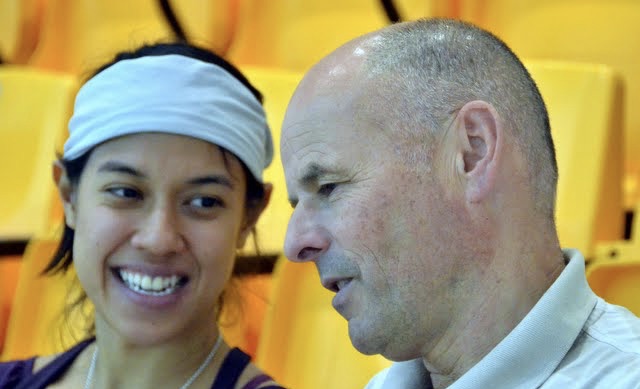 Andrew Shelley chats to squash legend Nicol David. Both did much to enhance the women’s squash landscape

“There are approaching 4,000 items catalogued now, stretching back to 1890, and although there are gaps to be filled, a great many of the handbooks and magazines along with many World Championship and other major event programmes are in place so that questions can be answered and researches mounted,” Shelley added.

Initial WSL information is at www.squashlibrary.info with future projects for the Library including digitalisation of key materials, regular social media sidelights, articles and posters that Federations can use, looking back at advertising, court development and other facets of our sport. Spotlights and features will be added to the site regularly.

For those with questions, keen to offer appropriate historical materials to WSL, or even keen to support the running costs, Andrew Shelley can be contacted at [email protected]

“WSL can never be complete, but over the coming years we will be getting as close as possible!” Shelley concluded.

Andrew Shelley is a highly-respected figure in world squash, who began his 43-year association with the sport in 1976 when he joined the (then) Squash Rackets Association, now England Squash.

Over 15 years, he oversaw a 300 per cent growth in the women’s pro tour before being appointed the WSF CEO in 2010.

WSL is an independent organisation registered in England as a Community Interest Company (CIC), a specific category for charities and those on a similar plane who operate to benefit their community – in this case the world of squash – and can raise support funding, but cannot make a profit.