The wrath of the weather once again denied tonight’s final matches the prestige of being played at the impressive all-glass court set up at the Tap Seac Square. However, that did not dampen the spirit of all the finalists who gave the packed gallery a feast of our lovely sport.

The women’s final started the evening for a change, after four straight days of the men opening. Hong Kong’s Annie Au, who has played in the event for many years but never won it before, was up against Malaysia’s comeback queen Low Wee Wern. The pair, who are quite in the same age bracket, has played each other fifteen times and not including the smaller regional events.

It was fairly equal in the first half of the first game up to 5-5, before Au ran away with six straight points to lead. Au was lethal in the front right corner throughout the entire match, winning six points in the very same spot in the first game alone. Every time the ball was sent there, it would either be a winner or a shot so tight that Low could only force a weak return. 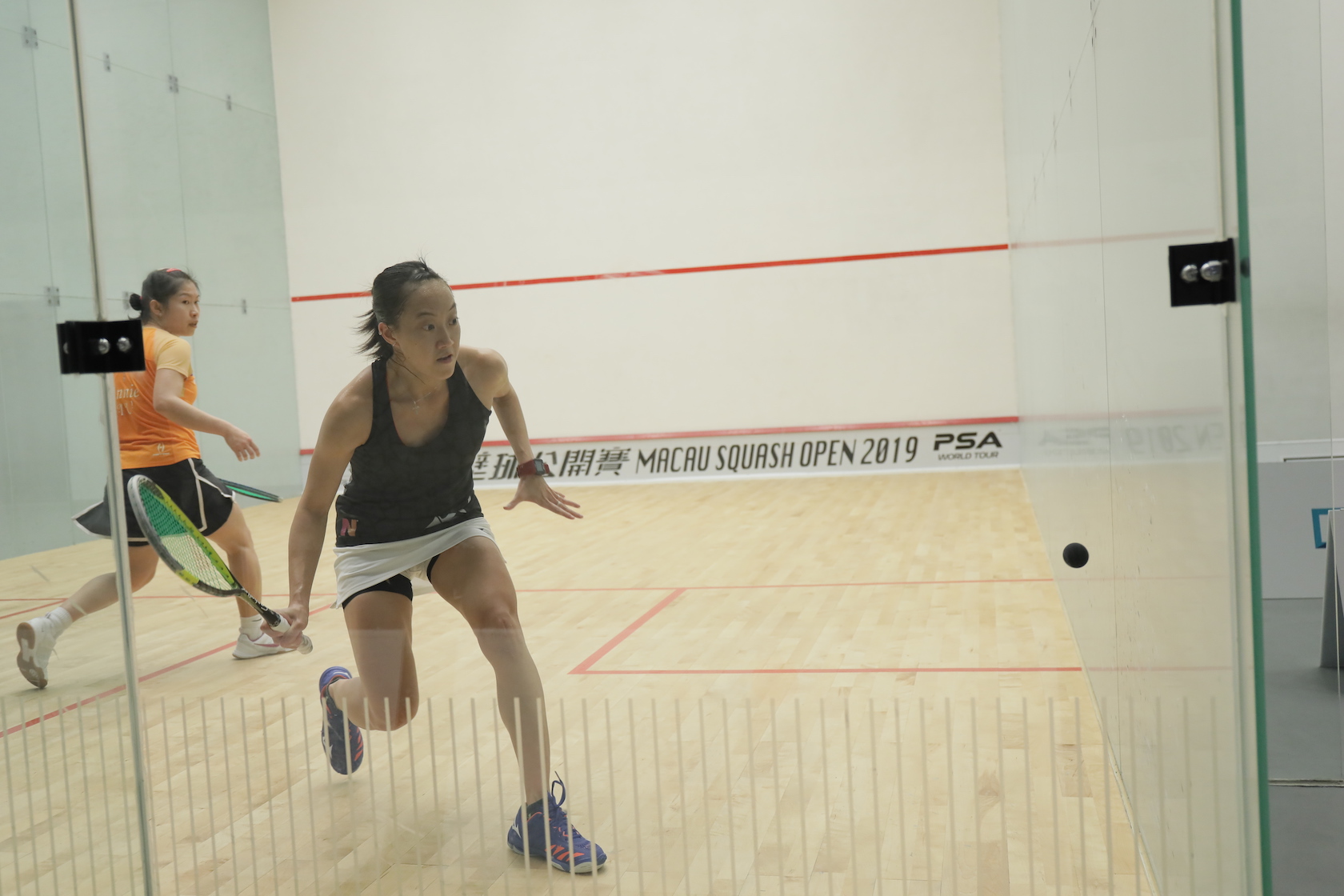 Low Wee Wern returns a shot to Annie Au in their final match.

Low got to a good start in the second, opening up a 2-point cushion at 2-0. It was close from then on up to 7-7 before Au broke away to game ball at 10-7. Low fought back and levelled 10-10 to force the tie-breaker and even got ahead to game ball after a no let decision was given against Au, but she couldn’t convert. Once Au was back serving, she made no mistake and took the game 13-11.

If Au was on fire on the front right hand corner in the first game, she was even more so in the second as she won an astonishing nine points there. By the second game, the refereeing decisions were also beginning to be questionable and highly inconsistent, something which lasted the entire match. An exact situation could warrant two very opposite decisions and, in some cases, were critical to the outcome of the game.

Low once again got off to a flying start in the third, racing away to a 3-0 lead. But that quickly turned around as Au then forged ahead 7-4. Low also had, on some points, looked to limp a little and was less comfortable with her movement. That did not bother Au as she never looked back from the lead and won the game and match after two consecutive no lets were given against Low. The win gives Au her biggest title in her career. 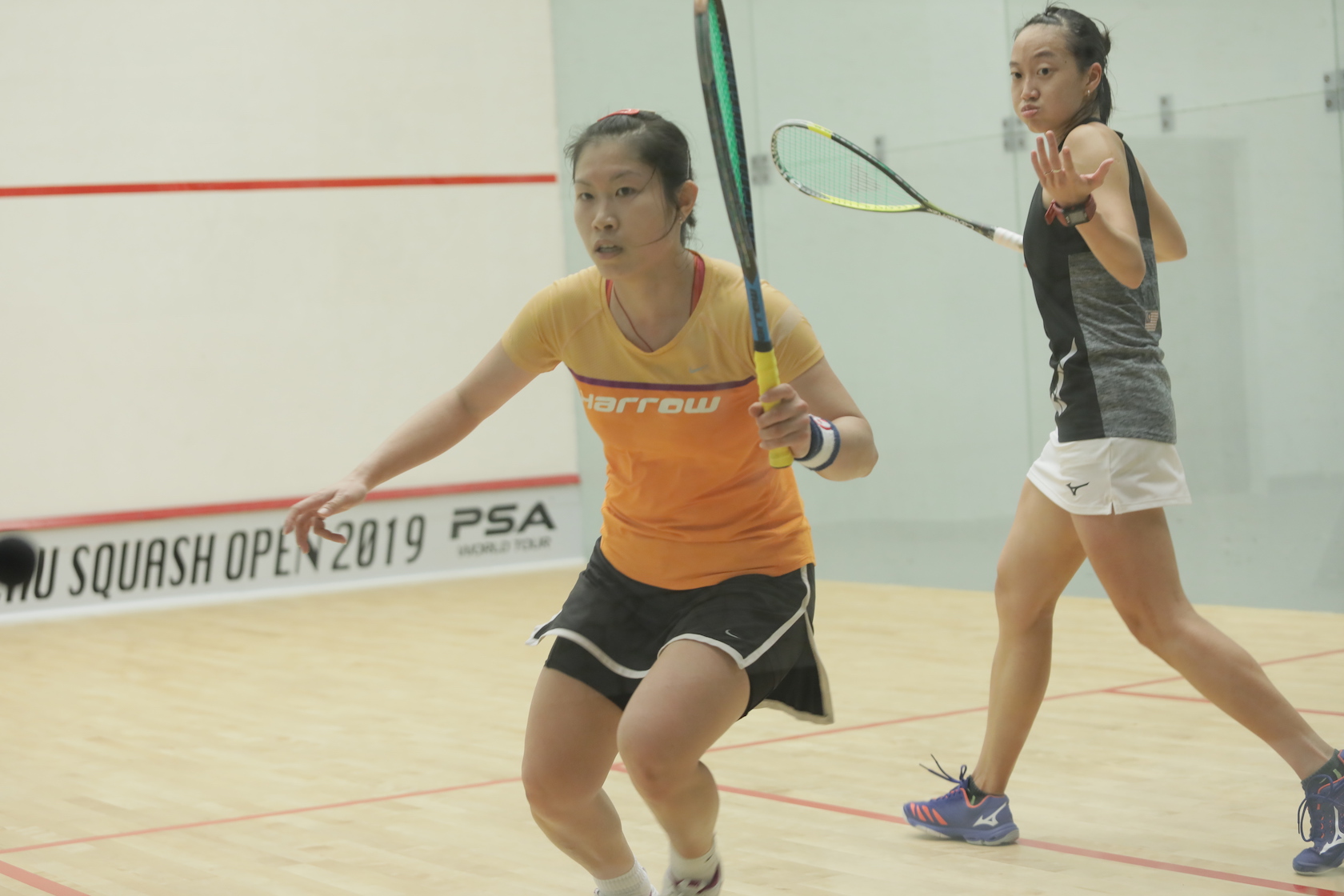 Annie Au in full control at the Macau Open final, while Low Wee Wern might’ve been asking herself what she needs to do.

“I’ve been playing this event for many years and in the last few, it’s either the semi-finals or once the final. So to win, it, I feel very happy that I took the opportunities I had this year. It also feels rewarding because I’ve had pretty tough matches in the beginning. It took me a while to get into this tournament, but luckily I managed to settle in the last two matches.

“(Low) Wee Wern has been playing really well this event, so I knew she was going to be a tough customer. I was expecting very tight points and they were. We’ve played each other many times, so we are both familiar with each other’s game. Our standards are also very close so it’s a case of who is more stable on the day,” Au said later when asked about how she felt and if playing Low Wee Wern was a familiar thing.

While Low might be ruing not taking her chances in the second game, she was also very positive on what she has achieved here this week.

“Overall, it’s been a pretty good round for me to have upset three higher seeds. I didn’t expect myself to get to the final. But for today, just a little disappointing and to be honest, the squash just wasn’t as free flow as I would’ve liked it to be. But it happens and I just have to move on from this.

“I don’t think I’ve played four hard matches back to back for a few years. So to actually get back on court today is actually a bonus. To actually know I’m OK physically and the body held up. For that I have to thank my physio who has been working for me for a few years now.”

The men’s final was on paper a cracker in store. But while it failed to live up to its sizzle, there were moments in the match where things were pretty heated up. The start of the first game was rather close, with the Peruvian breaking away to a 2-point lead after slamming a forehand volley cross court into the nick to go 5-3.

The next point was a crucial one as a no let given against Mosaad had him a little rattled and it was evident his concentration was off the books as the next five points went by quickly to give Elias the one-game lead.

In the second, the opening rally was perhaps the best of the day. It was long, both players took turns attacking and defending and it ended in Elias’ favour. That rally must’ve zapped quite a bit into Mosaad’s reserves as he quickly went down 1-6. He only managed to break the cycle after two consecutive deft drops to the backhand corner. Mosaad manages another two points in the game, but Elias would eventually be two-up. 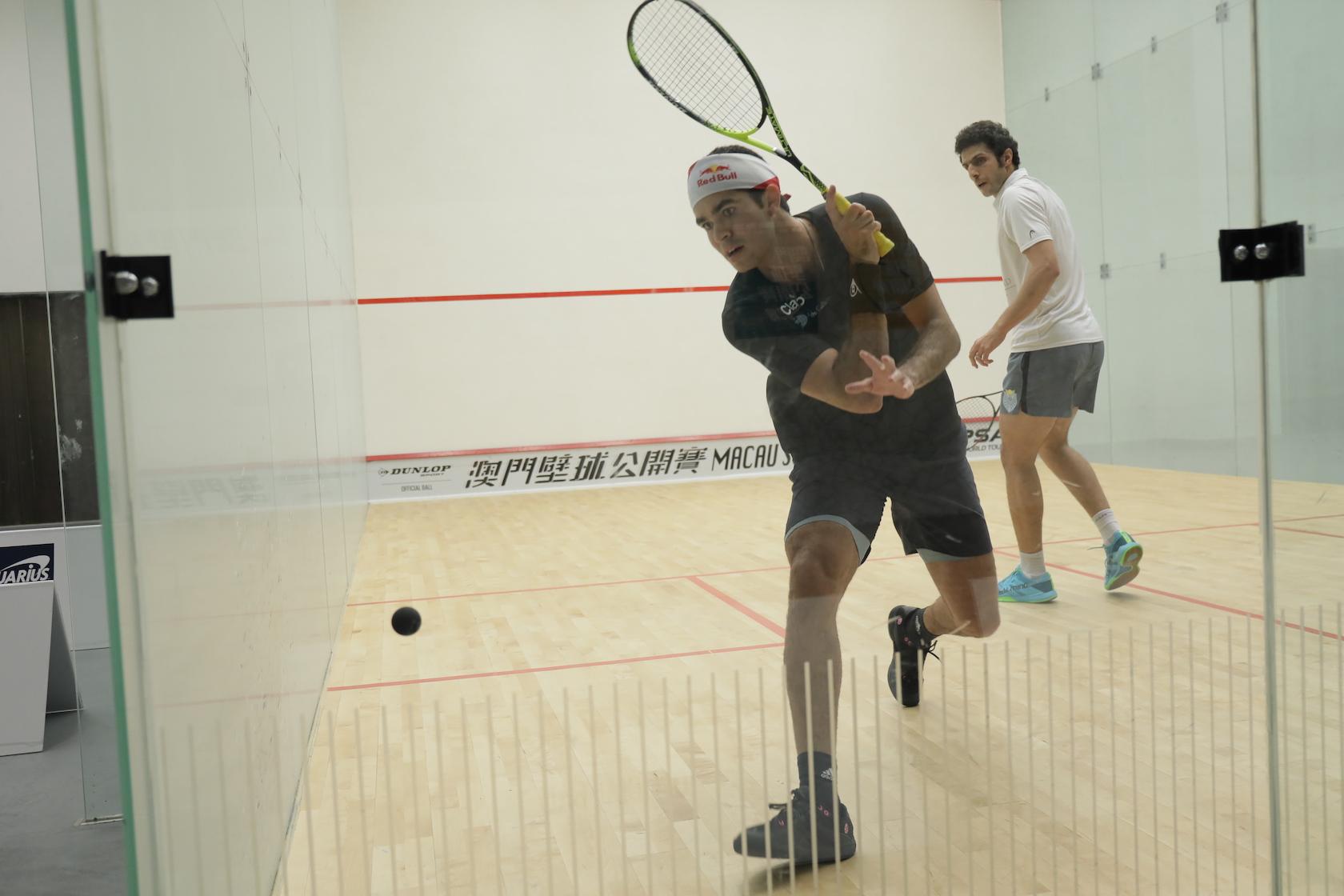 Elias was pretty much picking up every shot Mosaad threw at him – whether it was the low, hard Hammer of Thor shot into the back or a soft dying drop to the front, Elias would get to it and eventually, it simply wore Mosaad out.

The third was by far the most competitive game. When Elias got to a 6-3 lead, Mosaad found his second wave and fought back to 6-6, before he crashed a very simple shot in the front into the tin. That threw the momentum back to Elias, who raced to 10-7. Mosaad wasn’t done yet and took the next two points with two shots into the nick. Shamefully, the match had to be ended on a no let decision against Mosaad when it was evidently a simple let.

“That wasn’t easy at all today. It might have looked so, but it wasn’t. I played a really good tournament and I’m happy with my performance. I’ve been playing better every day and I knew today was going to be a lot harder playing against a player like Omar.

“I’ve had some good wins here and also this season, so I think I’m going to do well next week in El Gouna. I think it’s going to be a good year in fact. I hope I can keep on doing well. One of my goals is to qualify for the World Series Finals and hopefully finish in the top five (in the world) by end of the year.” 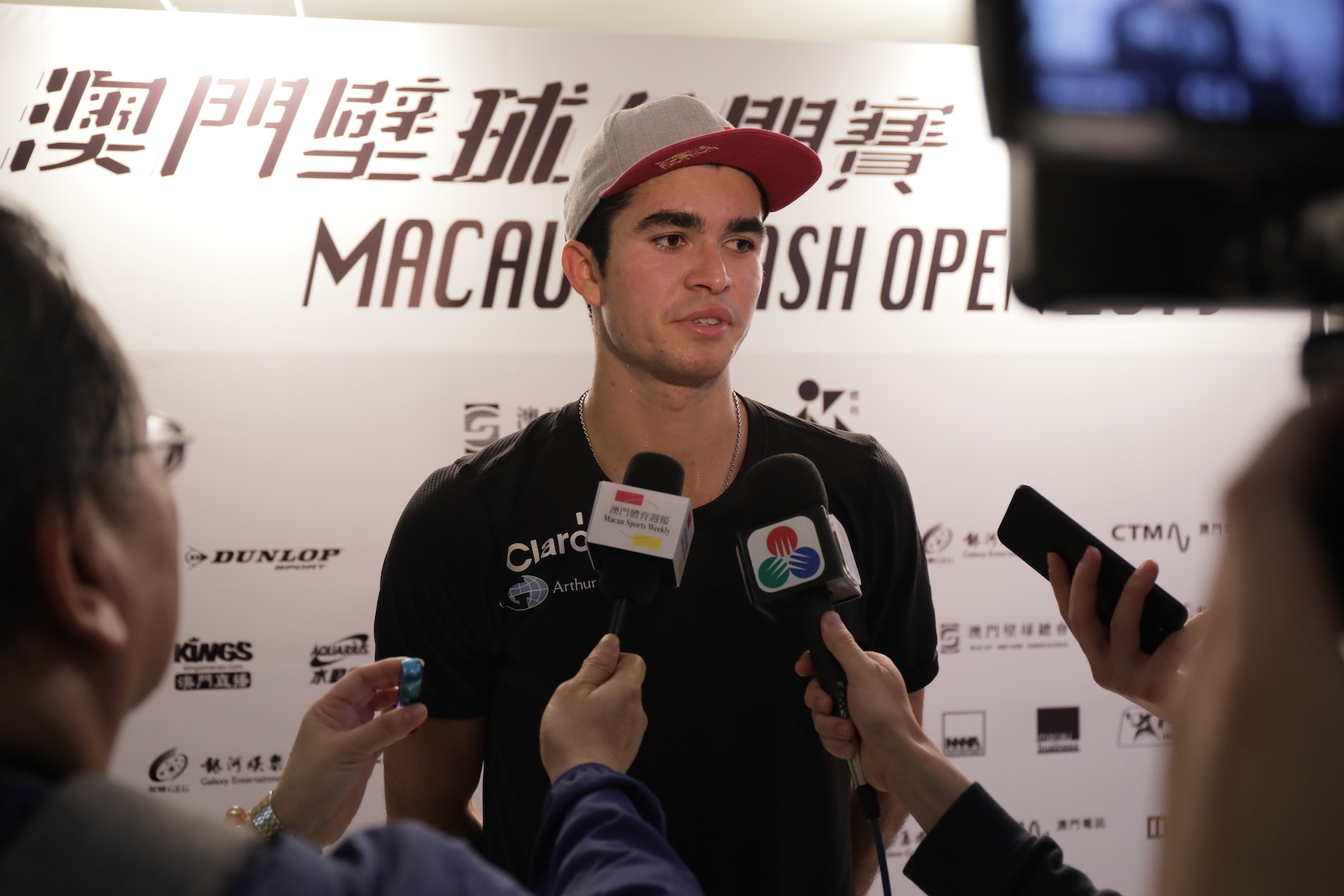 Diego Elias speaking to the local television after his win.

Omar Mosaad, who is clearly a local crowd favourite here, was still pretty pleased with his week here in Macau.

“You know I did my best here. I did not start very well today, especially in the first game. He started to be very confident and played really well. He also had the advantage of playing in this court all week, while I’ve been playing on the other. So today is really my first time on this court and it feels different.

“But overall, I’m happy with how I did here. I won three matches and lost today. Of course, today is also a very valuable lesson to me to develop my skills better and work on my fitness. Right now, I’m just looking forward to my next tournament back home in El Gouna.” 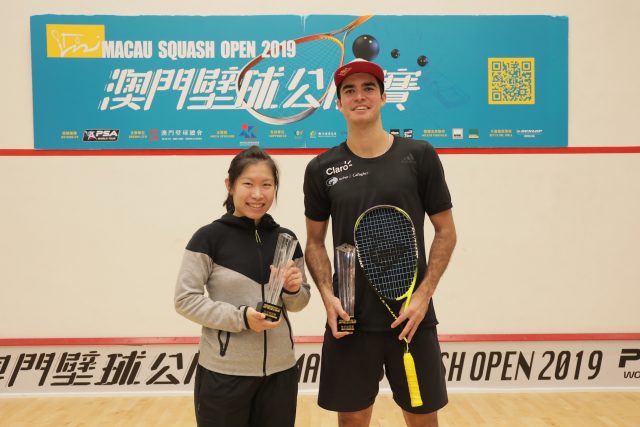