Local favourite Annie Au pulled off what might be the greatest escape of her career when she saved four match balls at two games to one down, and come back to win her quarter final match against Canada’s Samantha Cornett.

It must be said that Cornett played remarkably in the first two games and was in total control for most of the rallies. Au is well known for her deadly drops to the front and it was no different today, but each time, Cornett was ready to pounce on them.

Cornett played at a high pace in the opening two games and troubled Au tremendously. But the pace was lessened in the third and that’s when Au was able to be comfortable and deadly. Perhaps it was a plot to conserve energy to inject pace again in the fourth, which she did very well that got her to match ball 10-6. One could say she was a little unfortunate not to be able to convert, but it was also Au’s sheer determination, which was very evident, that rattled Cornett. 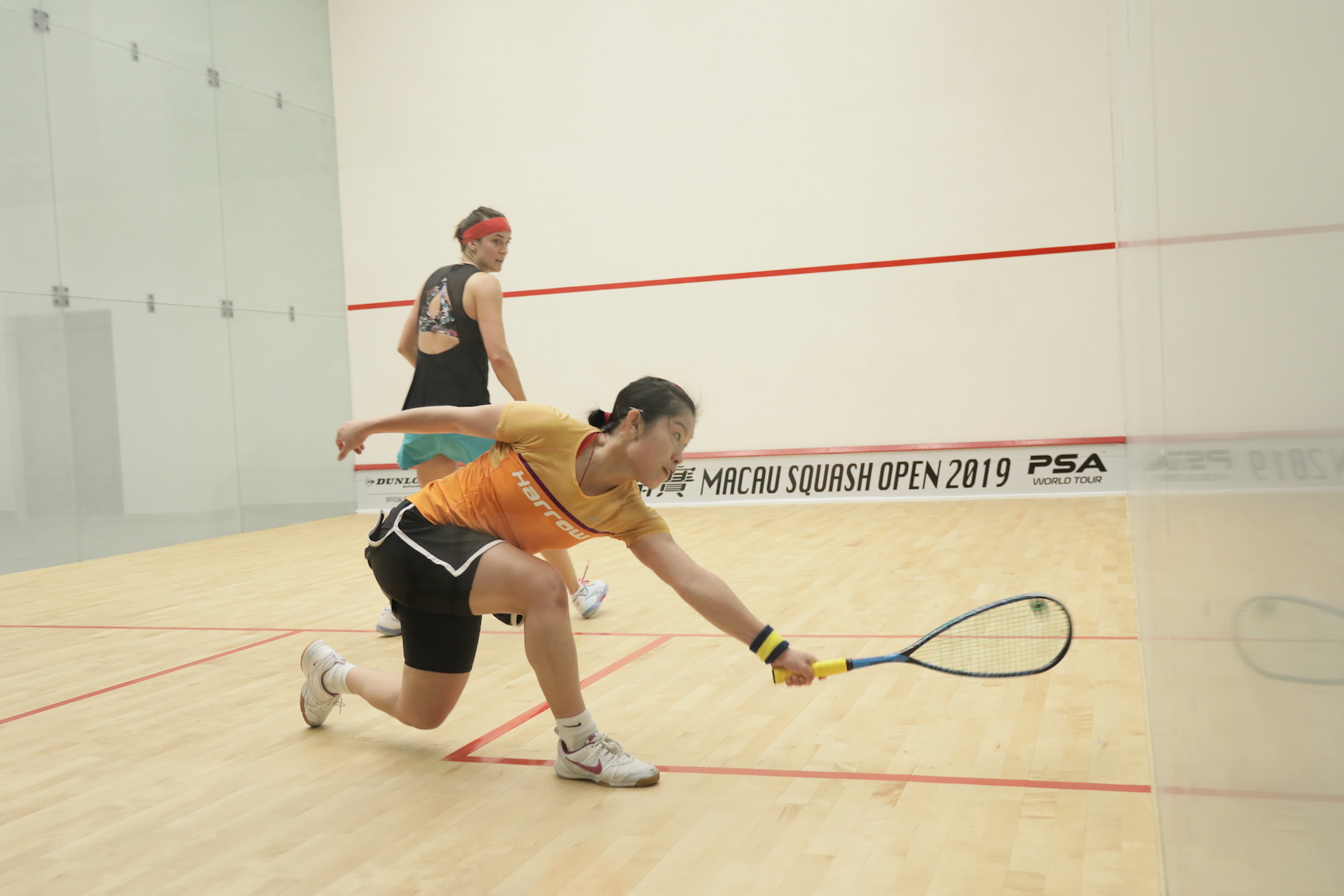 With everything to play for in the fifth, both players gave their all and Au was never too far ahead, but enough to eventually won her the match and a place on the glass court in Tap Seac Square tomorrow against Joshna Chinappa.

“That was very exciting. At 6-10 down in the fourth, I was thinking, let’s give it a gamble and one big push. I told myself to let loose and play a little more relaxed, then maybe I can catch up a little and eventually I did, and I’m very happy about it.

“I was a little eager in the first two games and she played at a very fast pace, so I didn’t get to do much. When she slowed down a little in the third, I was able to play my shots more effectively,” Annie said after her big comeback.

In the earlier tie, India’s third seed Joshna Chinappa had coolly dispatched Egyptian Mayar Hany. The world number 15 played in such a relaxed manner, it almost seems scarily casual. But when the opportunities came for her signature low kills, no ball was spared.

The first was crucial, with Chinappa winning 11-8. She got into even a more relaxed mode in the second, which Hany was clearly uncomfortable with and she eventually gave up towards the last few points after falling behind 1-7. But Hany came in strongly in the third, racing to a 7-3 lead. But Chinappa wasn’t going to play an extra game as she slowly came back to seal the match 11-9. 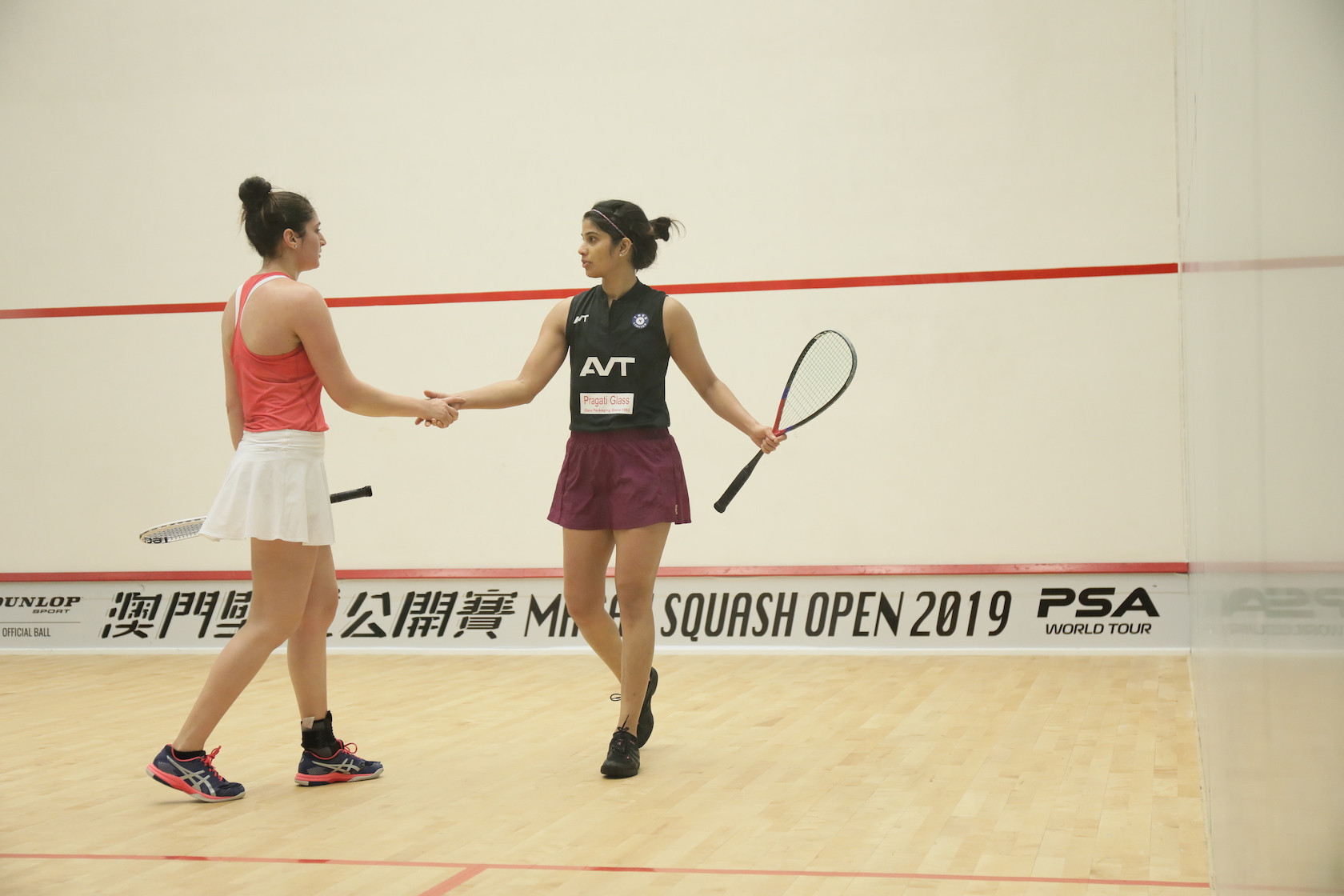 “I was surprisingly a lot calmer than I thought I’d be and I think that worked for me today. I just felt my length was good but there were some patches I lost a little bit of focus. Mayar is super strong. She’s had great results on the tour, so I’m happy to win in three.

“I was pretty relaxed from the start, but I was also under pressure even though I didn’t show it as much. But it was definitely a lot harder than what you could probably see from the outside. Like the third game, it could’ve easily gone her way and I’m happy to pull that through.”

In the bottom half of the draw, Zeina Mickawy pulled off an upset when she took out Hong Kong’s Joey Chan. The hard-hitting Mickawy took full advantage of Chan’s slow start in the first two games and twice built considerable leads and never looked back.

Chan managed to pull a game back in the third, but was unable to stop Mickawy in the fourth. The win meant a spot in a 50k semis, which is her best result on tour to date, bettering her previous best of a 25k final. 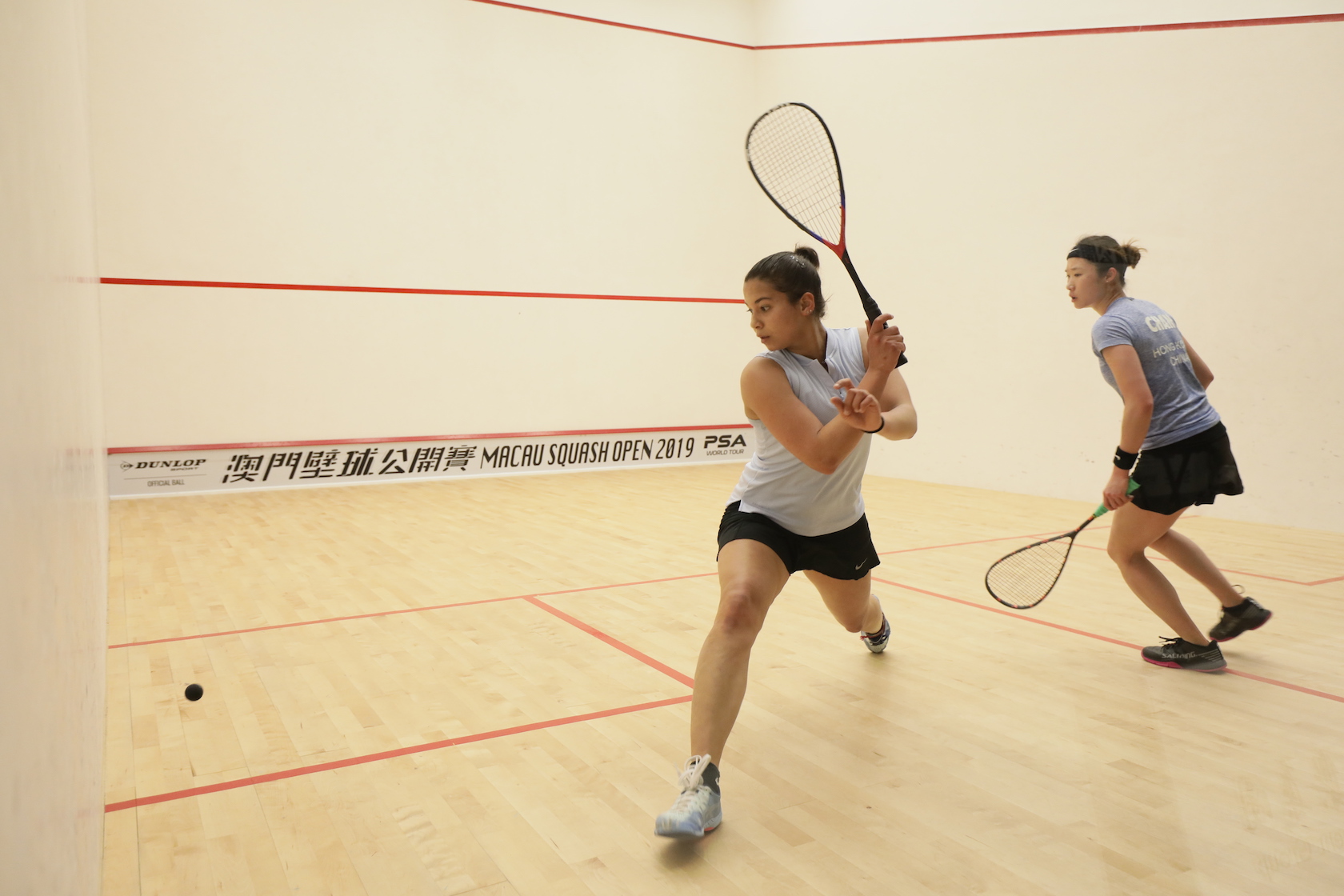 “I’m so happy to have won today. I know Joey is one of the top players and she has so much experience. I tried to push myself as much as I can and I’m glad I did it. I’m looking forward to tomorrow’s semi-finals and hopefully it will be a good match. It’s my first semis in a 50k and I look forward to doing even better than that,” an evidently happy Mickawy said.

Malaysia’s Low Wee Wern continued her fine run here in Macau with another Egyptian scalp. This time, Nadine Shahin fell victim to the resurgence of the former world number 5. Like the previous day, the first game was a close and critical one for Low. She managed to squeeze through 11-9 the first and brought the momentum into the second, winning it comfortably 11-4. 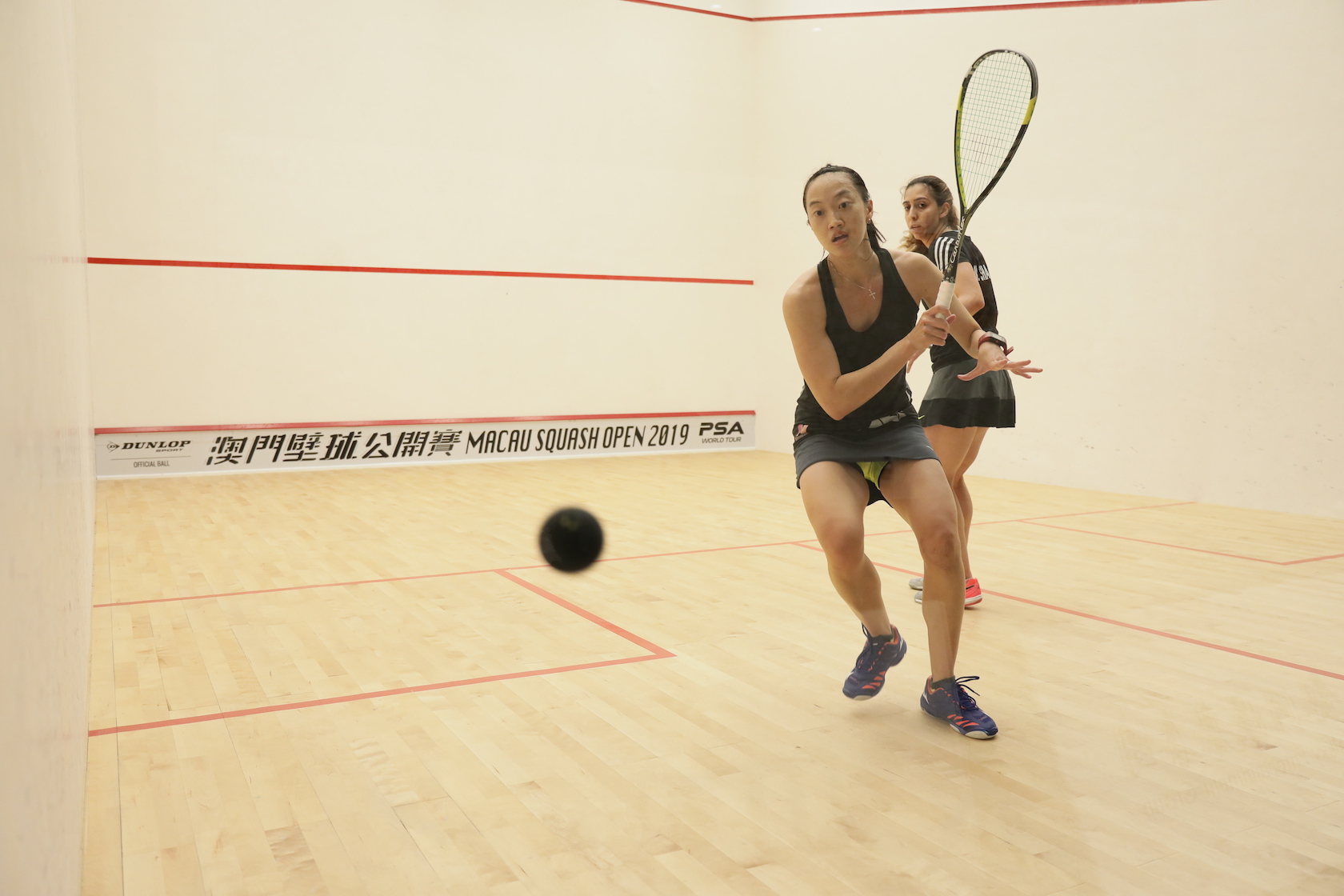 Low Wee Wern all focussed as she hits a return to Nadine Shahin.

Shahin, who plays with an unorthodox topspin like strokes, then turned the tables in the third and was in full control from start to end. She continued her good run in the fourth and quickly raced into a 10-5 lead, which worried the Malaysian camp. But the cool and composed Low slowly inched back and took seven points in a row to clinch her semi-final berth, winning the final point on a no let decision against Shahin, who ran hard into Low, landing both women on the ground. 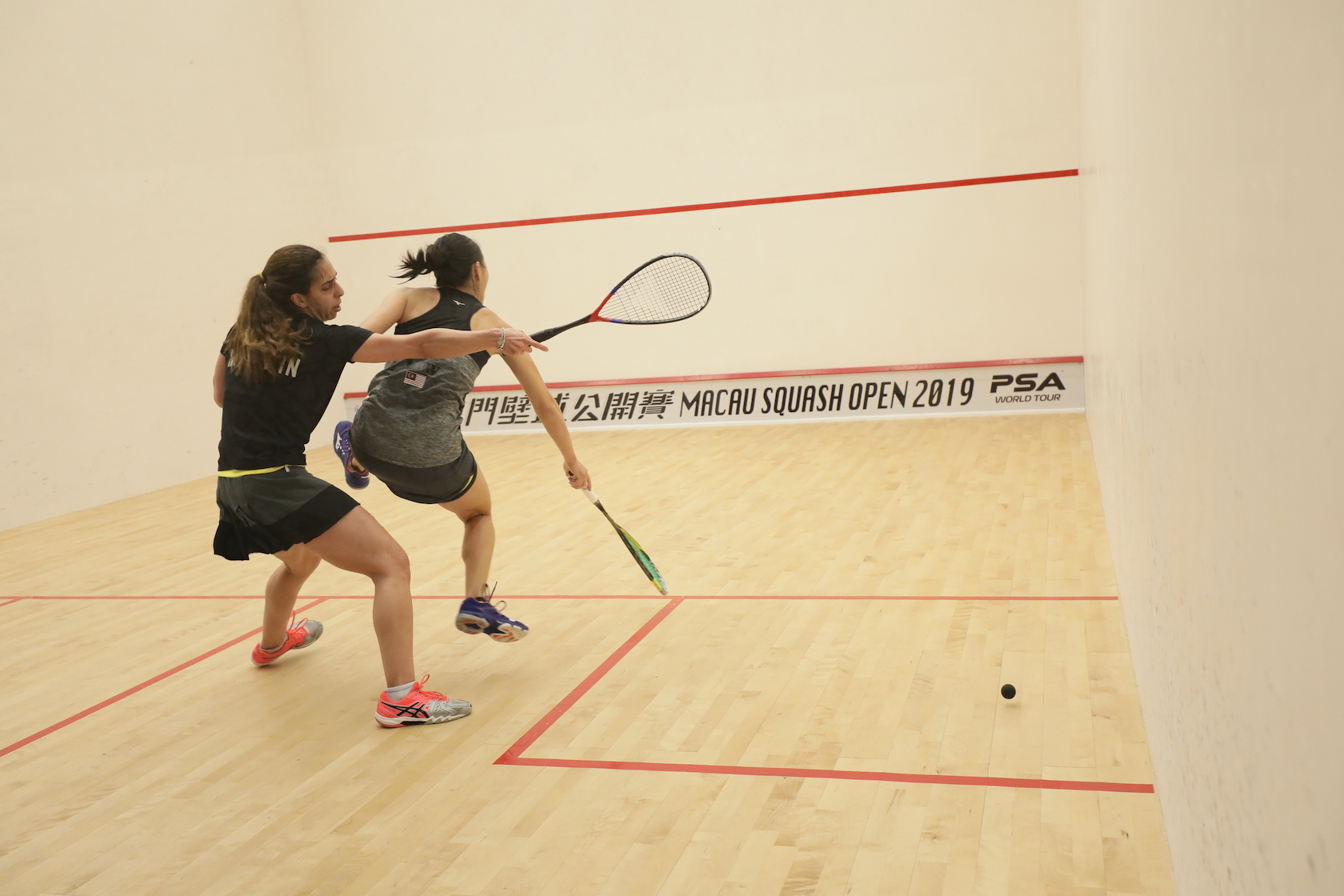 “I lost to Nadine in World’s last month so I’m very happy to get this win. She did well to come back in the third and the fourth. I didn’t do much wrong really, I kept her in the back but she played a couple of good winners. I’m pleased I contained that and came back to win it in the end. It was big for me mentally to be able to come back from there,” said Low after beating Shahin, who she is drawn to play again in the El Gouna opening round next week.

In the men’s event, second seed Saurav Ghosal was shown the exit by Scotland’s Greg Lobban after the pair had battled it out for 65 minutes. Right from the first game, there were traffic problems, with both players taking turns to clarify with the referee. But the world number 10 managed it better and took the opener 11-6. 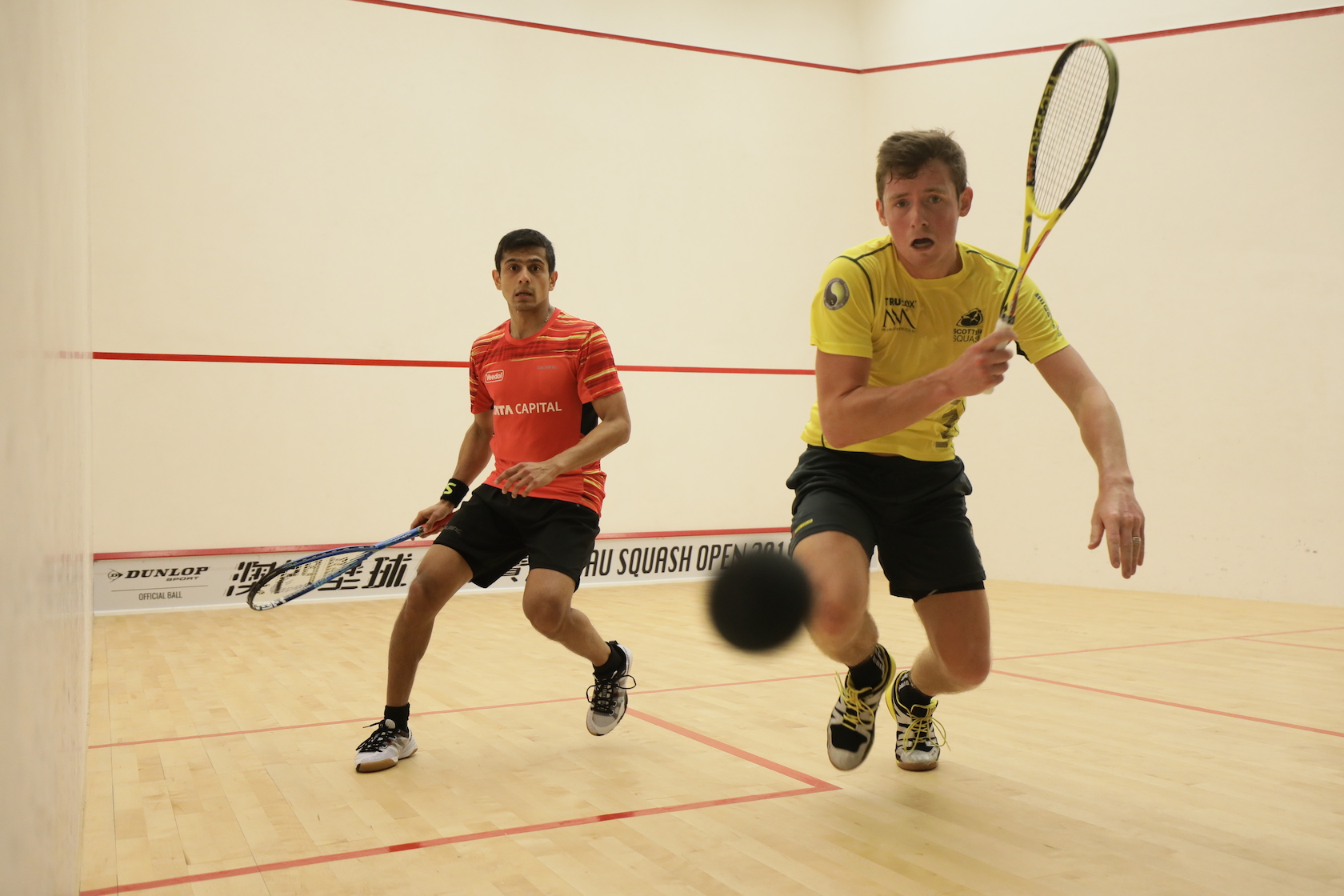 Lobban came back to take the next three games, earning himself a first ever scalp of a top ten player and a shot against the Hammer of Thor Omar Mosaad tomorrow.

“I’m extremely happy with the way I played. I’ve played Saurav a couple of times now, maybe 3-4 times this season already and I’ve always been closed but have never crossed the line. So even when I won the third to go 2-1 up, I knew I still had to be on my toes.

“One of the goals I set out with my coaches this year was to beat a top ten player, so I’m happy to tick this one off!” Lobban said later.

Former world number 3 Omar Mosaad produced a masterclass display toy halt the run of Malaysian youngster Ng Eain Yow in the opening match of the day. The hard hitting Egyptian was clinical with his finishes especially on his forehand volleys. Anything within reach between his shoulder and waist was severely punished. There wasn’t much Ng could do today as everything he threw at Mosaad, he threw it back better. 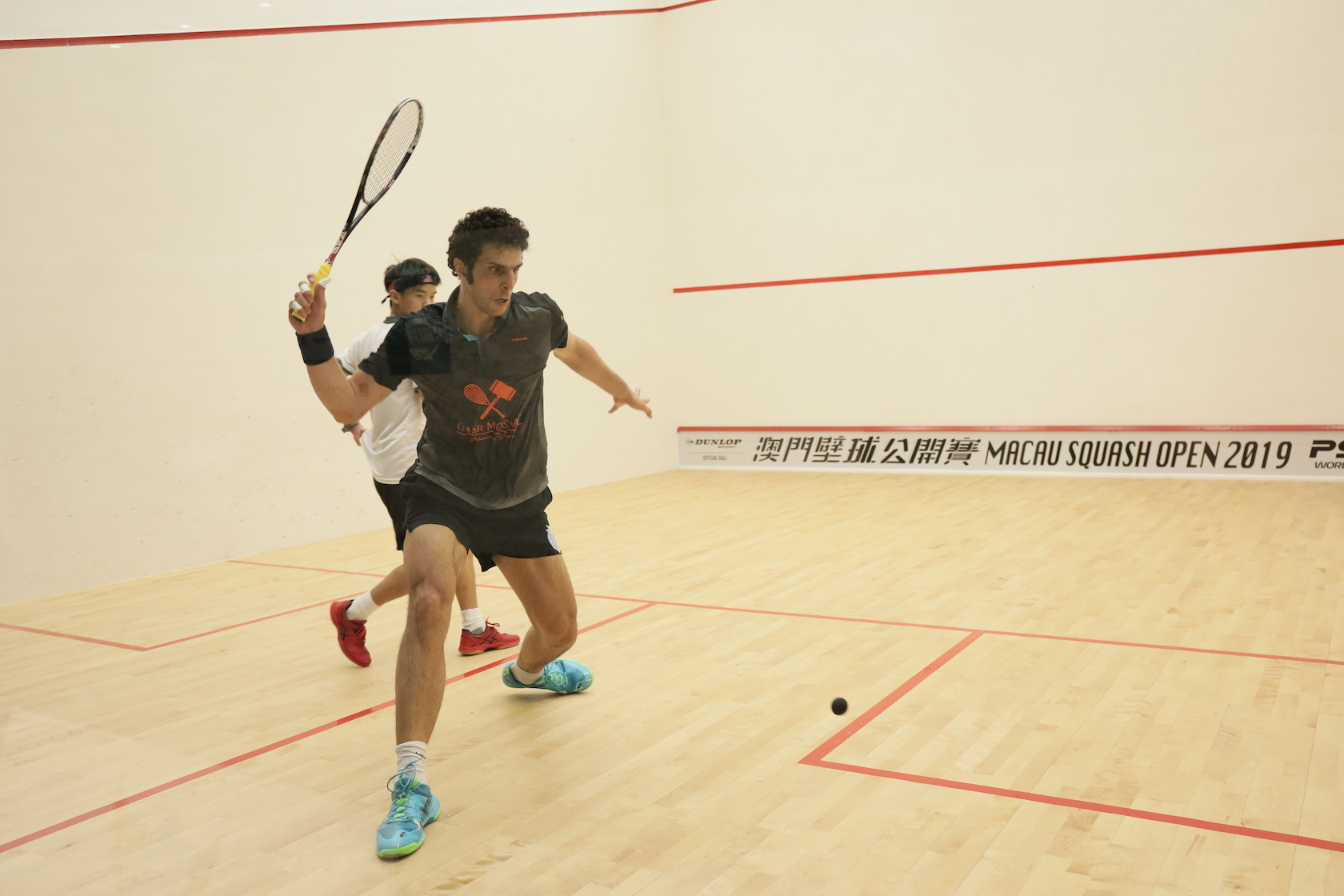 “I felt a little more relaxed and confident today, having played yesterday. The time difference is a factor and I am more aligned today. I feel a lot more prepared today than the previous day. I knew Yow is a good player and I prepared well for it. I’m really happy to have won today.

“Every year we gain a little more experience in life. Right now, it’s time for me to relax a little and play my game. I try to put 100% into every match I play. It worked the first two matches, so I hope I can continue to do so tomorrow,” said Mosaad.

Hong Kong will be represented by defending champion Yip Tze Fung in the semi-finals tomorrow after he won a long battle against compatriot Leo Au and Max Lee was beaten by top seed Diego Elias.

Expectedly, Yip and Au were both engaged in very long rallies and both showed brilliances in attacking and retrieving. But Yip has a fancier game and today, he made fewer mistakes than usual and was able to finish more clinically. 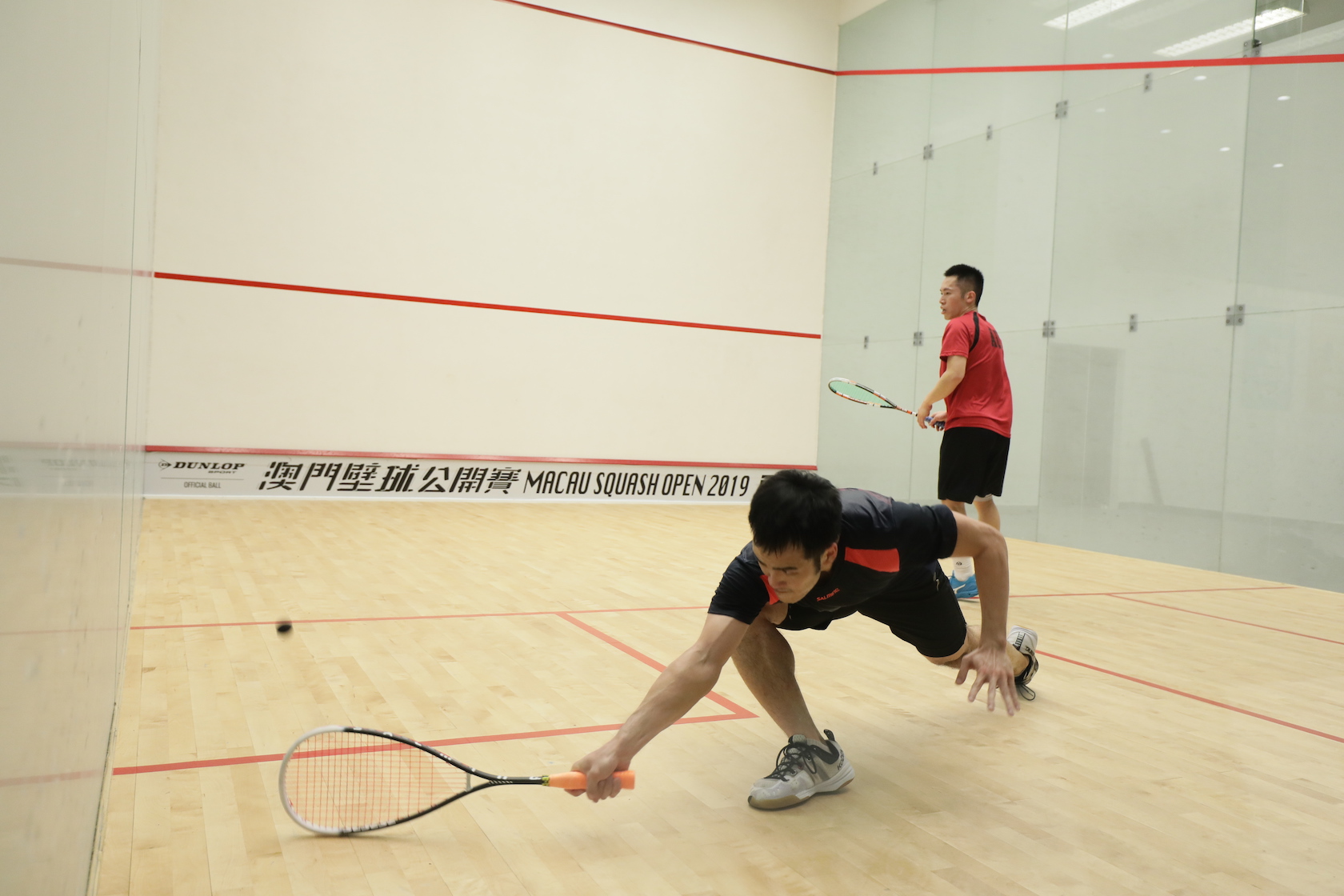 Yip Tsz Fung is down, but certainly not out as he booked his semi-final ticket

“I thought I did very well today. I was able to play to my game plan. My shots were also coming in today so that helped with my confidence. Maybe I got a little carried away in the third and was too eager to finish the match off. But I managed to let that go and came back to finish the job,” Yip said of his win.

When asked what he thought about tomorrow being the defending champion, Yip was quick to point out, “I may be the defending champion, but I really do not think much about it. Even if the same people were playing in the same event, the end can be very different. Many of us have similar standards, so any0one can win on their day. I’m just focussing on playing well one match at a time.”

Diego Elias meanwhile, got his first real test today from Max Lee. The Peruvian was in control for most of the rallies, but Lee is also known for his amazing speed and retrieval. The combination of Elias’ control and Lee’s retrievals gave the crowd amazing entertainment.

The pair split the first two games, Elias clinching the first and Lee equalised a close second. In the third, Lee had looked tired, and at certain points, looked like he was about to cramp. But he managed to hold on till the end, but was unable to stop the Peruvian Puma, who ended the match with an unexpected reverse angle that completely flat-footed Lee. 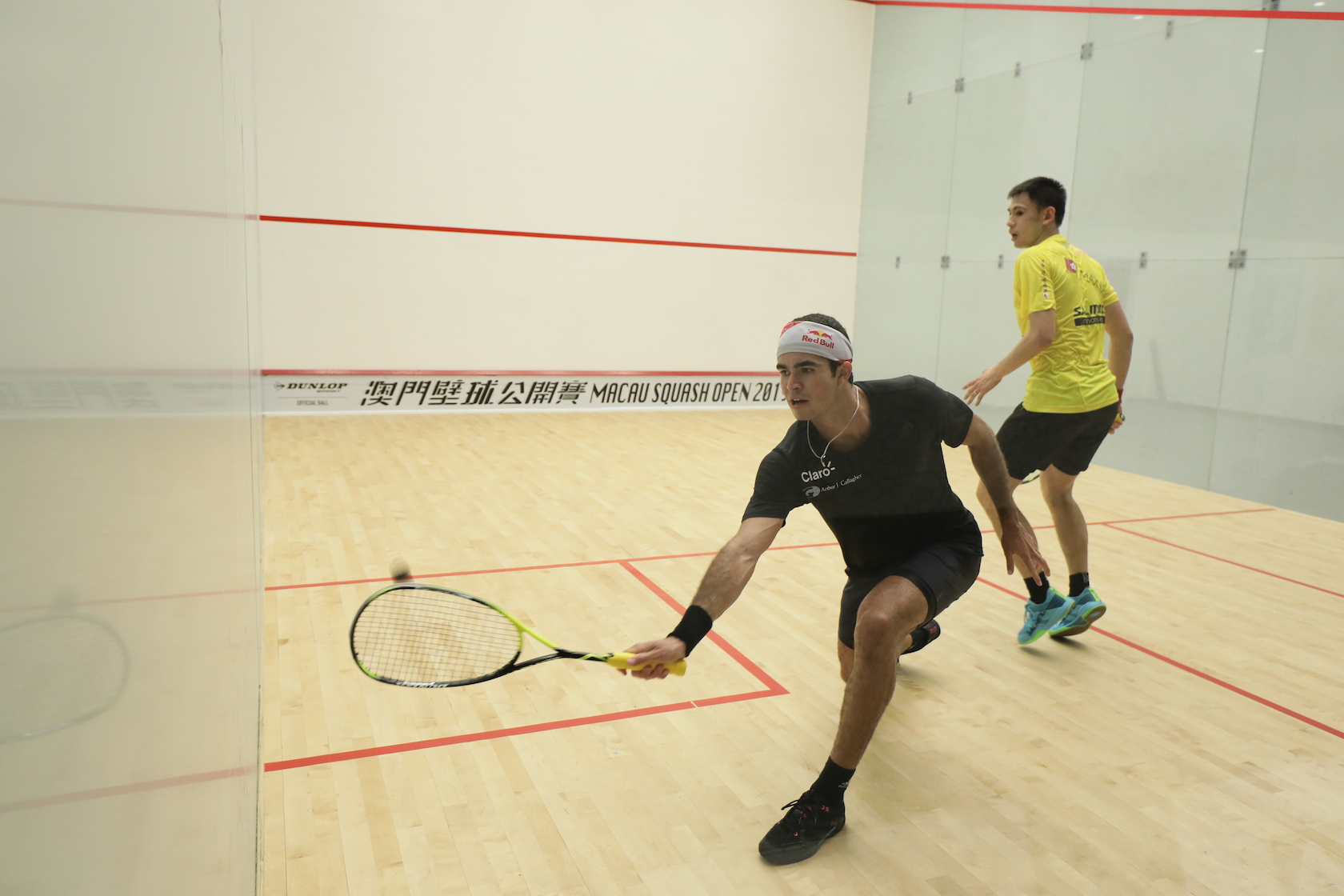 “I think I played a really good match. Max is a really tough opponent – I’ve played him quite a few times so I know how hard he can be. I’m happy to be able to win in four. I didn’t have a match as tough yesterday, but it was good I had that to help me ease into today’s match,” added Elias who also said he is looking forward to the glass court tomorrow.

Barring any weather complications, play will be moved to the all-glass court erected at the Tap Seac Square across the sea on Macau island.