Zahed Salem produced the upset of the day here at the Khalifa Tennis and Squash Centre in Doha, Qatar when he took out the flashy Columbian Miguel Rodriguez. But it was Paul Coll and Omar Mosaad who stole the show today after their monumental 118-minute battle that had the crowd on the edge of their seats for most of the time.

The first two games alone took just shy of 50-minutes, split one a piece between them. It must be said the quality of the squash was very high, with both players pushing each other to the limits. It was Omar who drew first blood, nicking the first and had the opportunity to go 2-up when he was 10-9 up in the second. He had another two opportunities, but was never able to convert, while Paul coolly slammed into the nick his first opportunity to draw level.

The third and fourth games were much shorted in comparison, but was played at a high quality and pace. After Paul took the third, many would’ve written off Omar, but he proved them wrong by taking the fourth – with a margin too. 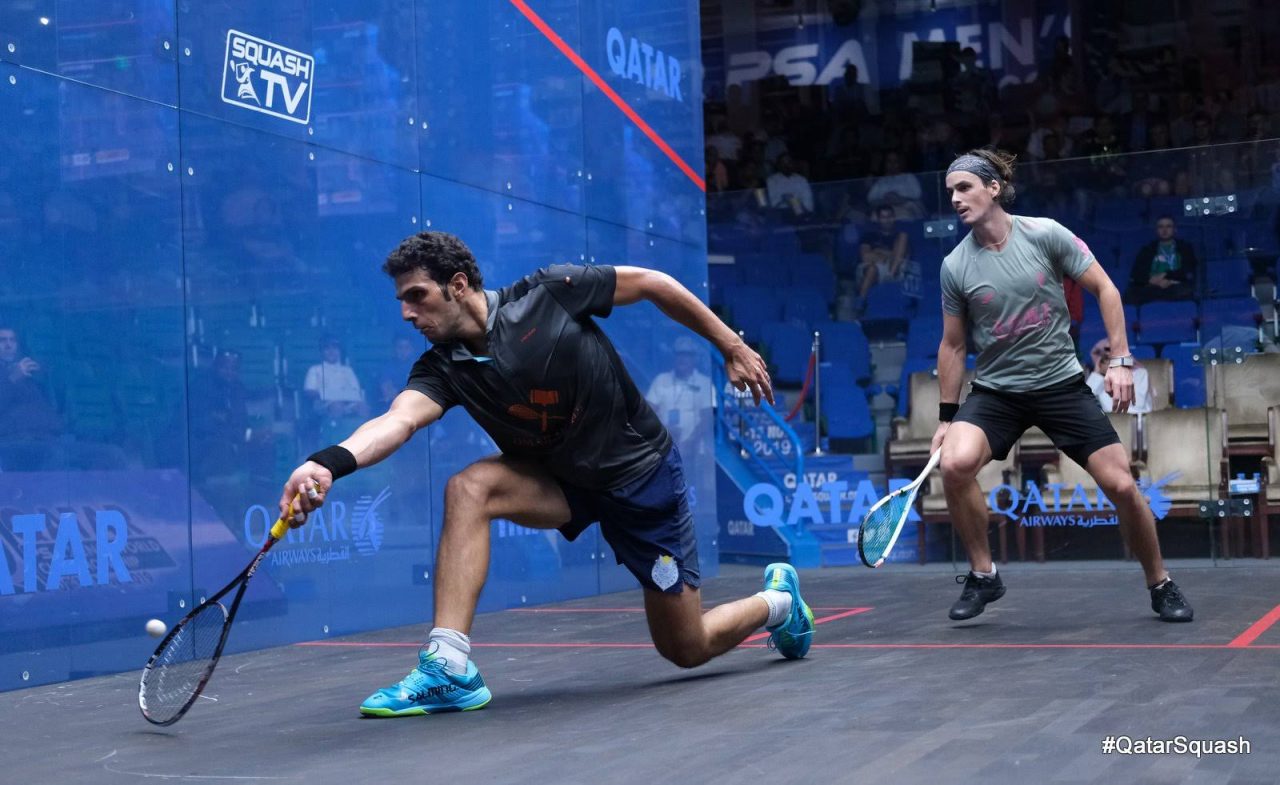 With everything to play for, both players gave their all in the fifth. However, given the amount of time the pair had been on court, there were many parts of the game which turned out scrappy. It didn’t help that there were many interruptions due to the fact that the decisions were pushed to the video referee. It was even more unfortunate that the match ended on a questionable no let decision against Omar.

“Very, very relieved. That was pretty scrappy squash at the end there. It was very tough mentally and the ball was very soft. I just had to keep it mentally at the end there and push through and I’m glad I came through on the other side. I always thought I should have closed it out earlier. But it got a bit scrappy and I lost my squash a little.

“I’m going to go see Derek (PSA physio) now and get a good physio, get a lot of food and maybe go out to the pool. Just sort of recover as well as I can. Physically I was doing alright out there. It’s just mentally, it was quite tiring”, Paul said on what he would do to recover for tomorrow’s quarter final against surprise package Zahed Salem. 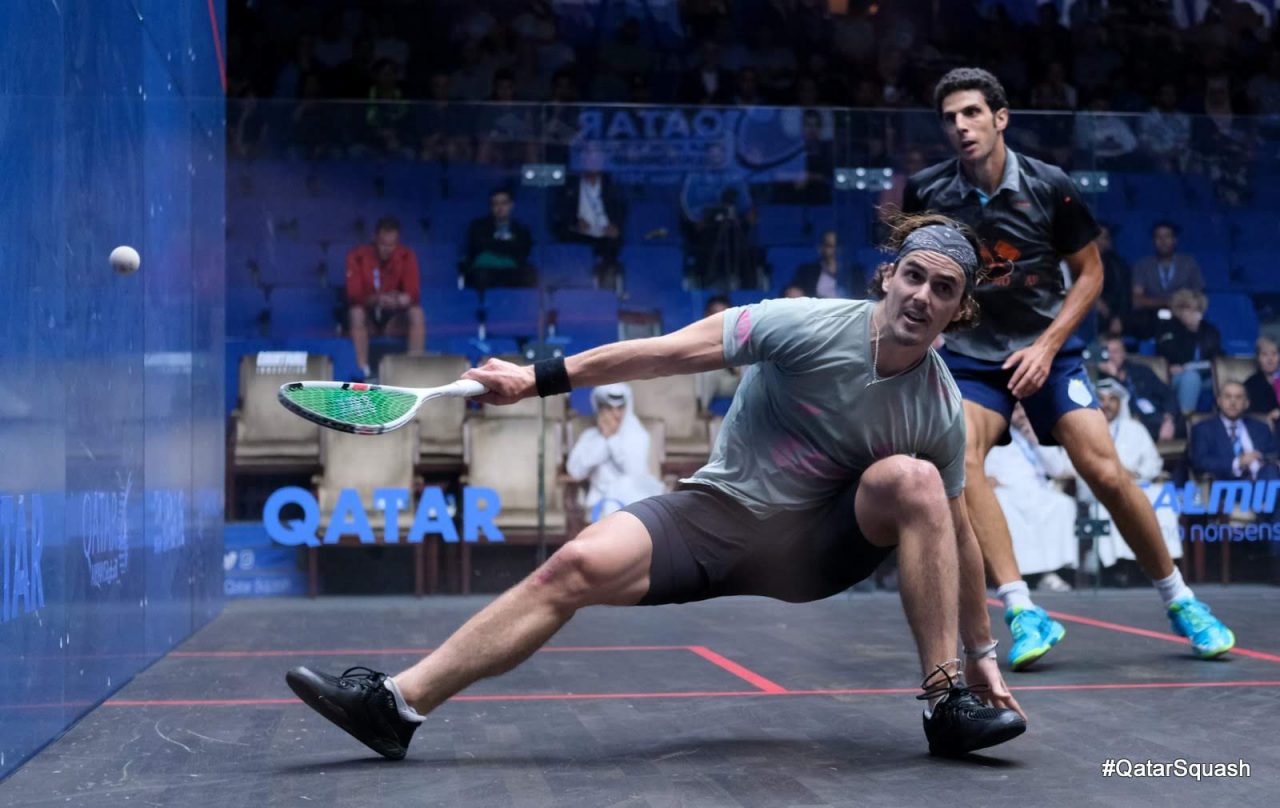 Paul Coll takes a tumble after returning a shot

While Omar might have lost out on this big match, but it was pure joy to see the Hammer of Thor being able to put up a performance as great as tonight.

“Today was a really important match for me. Paul is such a strong guy and to play with him, you need very good tactics. I’m really happy with my performance tonight. I trained really hard and well in the summer. But I didn’t get the chance to play well in the first few tournaments, especially in Egypt where I played Ali (Farag) in the first round. I’m looking forward to go back to training and hopefully play well at the Tournament of Champions next (in New York)”, Omar said after the match.

Zahed Salem, the world number 16 had already produced his best ever showing at the World Champs by being in the last 16, but he bettered that today to make his first ever quarter finals.

The 27-year old from Alexandria didn’t have it easy at all as he had to produce a classy comeback from 0-1 and 2-7 down in the second game. After losing out in the first game, Zahed looked even more down in the start if the second, as he quickly found himself 2-7 down. Miguel was playing with such fluidity and sending Zahed twisting to all four corners.

It was from 2-7 that Zahed played with more discipline and keeping things tight. He slowly inched his way back onto the score board and got himself in front to 9-8 and 10-8. He hit a tin on the forehand drop for Miguel to close in, who then returned the favour on the backhand side and the games were tied at one-each.

Zahed came back for the third a different player as his confidence seem to have grown so much. He was always in control and there wasn’t much doubt who would walk out the winner. He duly finished off the match in style with a forehand slam into the nick. 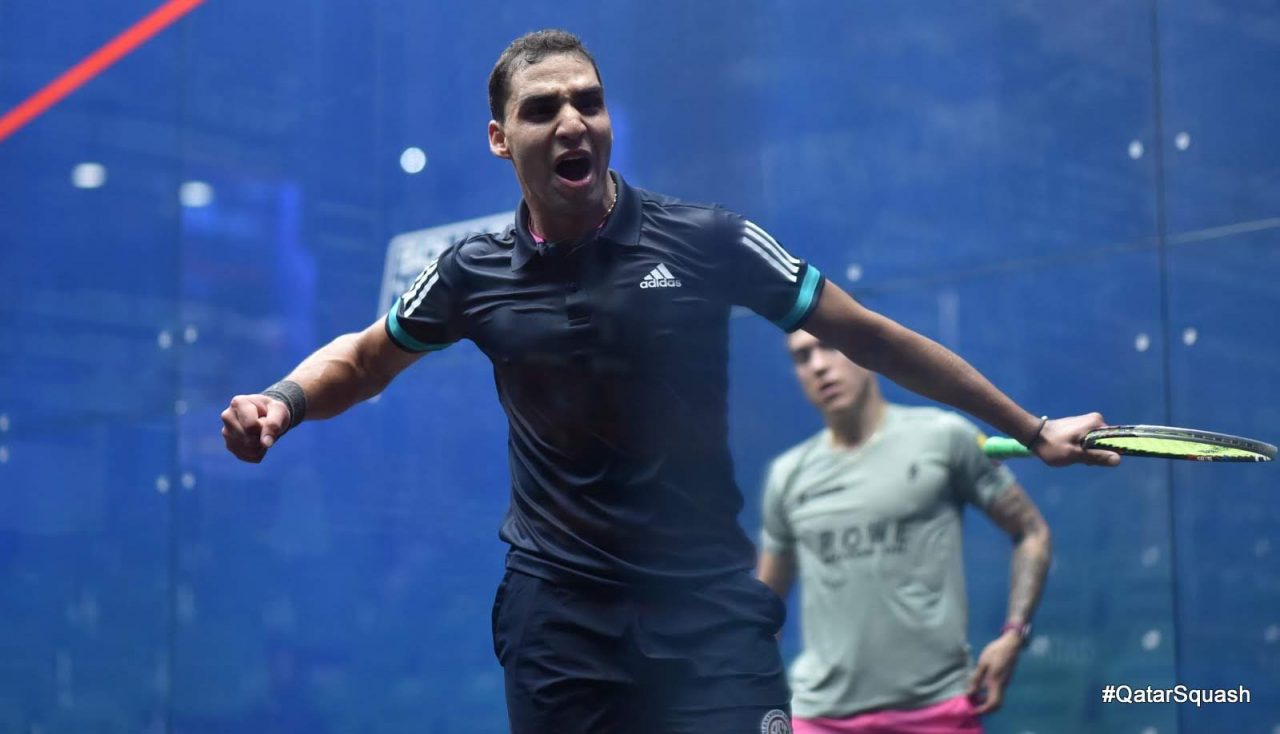 “I’m very happy to get into the quarters. It’s my first time at the world Champs and beating Miguel, a top eight player, it’s never easy. It means a lot for me to be through here.

“Miguel was incredible in the first two games. When I was 2-7 down in the second, I thought I should just enjoy my squash and that helped me to get back. I managed to get my concentration back. After I won the second, I managed to play to my game plan of keeping things at the sides. In the first two games, I wasn’t comfortable and confident to play to the plan”, a visibly happy Zahed told the press after.

“I was 10-5 match ball up and it’s just one point away from the quarter finals of the World Champs, so there was a lot of things going on in my mind. I started remembering when we played at the Grasshopper Cup, where I was 2-1 up and 10-7 match ball and I lost in five. I was thinking of that a lot, so I am very lucky to have won this 11-9”, Zahed shared when asked what was going through his mind after being match ball up. 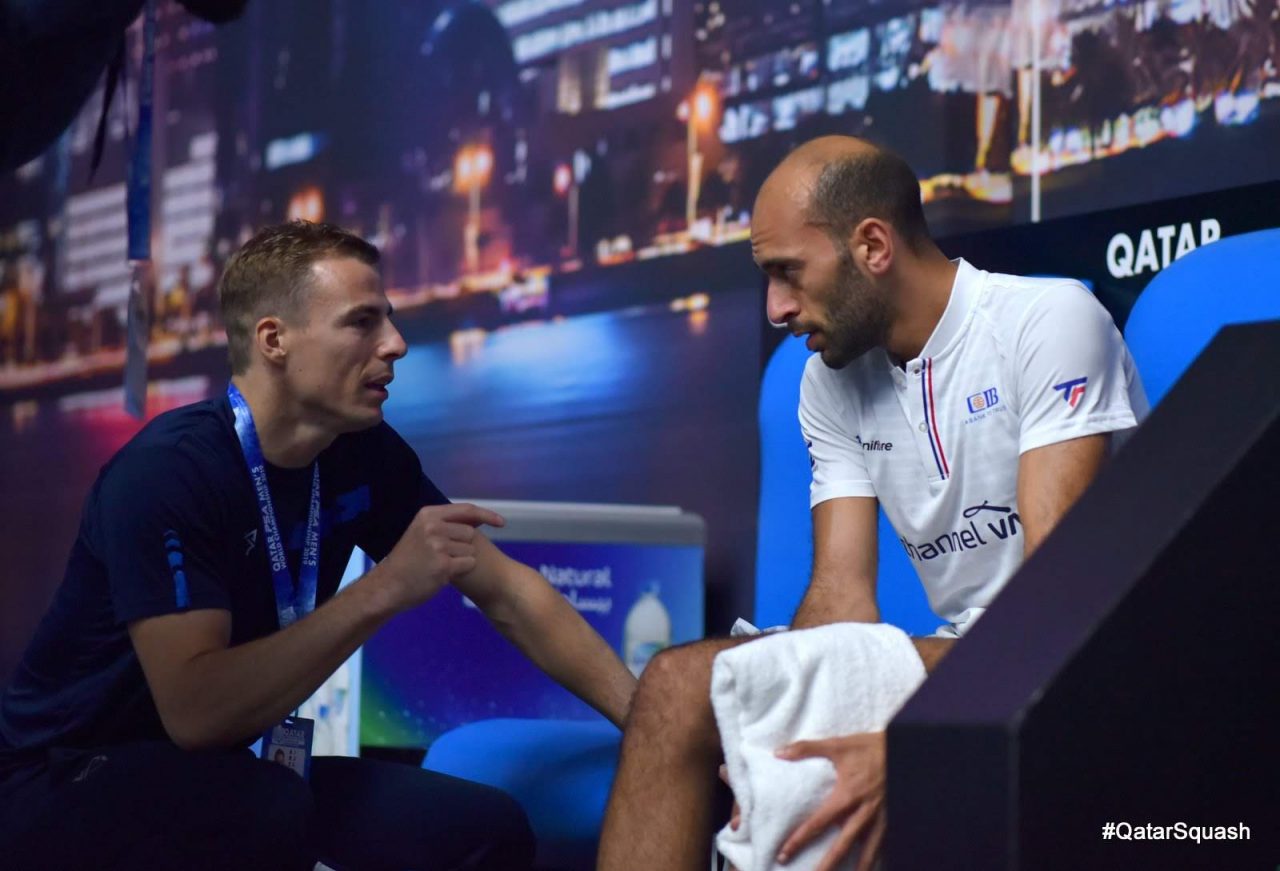 The Shorbagy brothers both won this evening to set up their mouth-watering last eight clash. Marwan, the younger of the pair had taken out Mohamed Abouelghar in the shortest match of the day – 30 minutes. The pair, who both contested in the 2012 World Junior final on this very court, did not provide the fireworks many was hoping for. Marwan was simply very on point this evening and that did not allow Mohamed much room to employ his shot-making squash.

In the final match of the evening, Mohamed ElShorbagy ended Asian interest when he took out India’s Saurav Ghosal in straight games. The top seed was in control for most of the first two games, but was forced to save two match balls in the third to win 14-12 and wrap the match up in three. 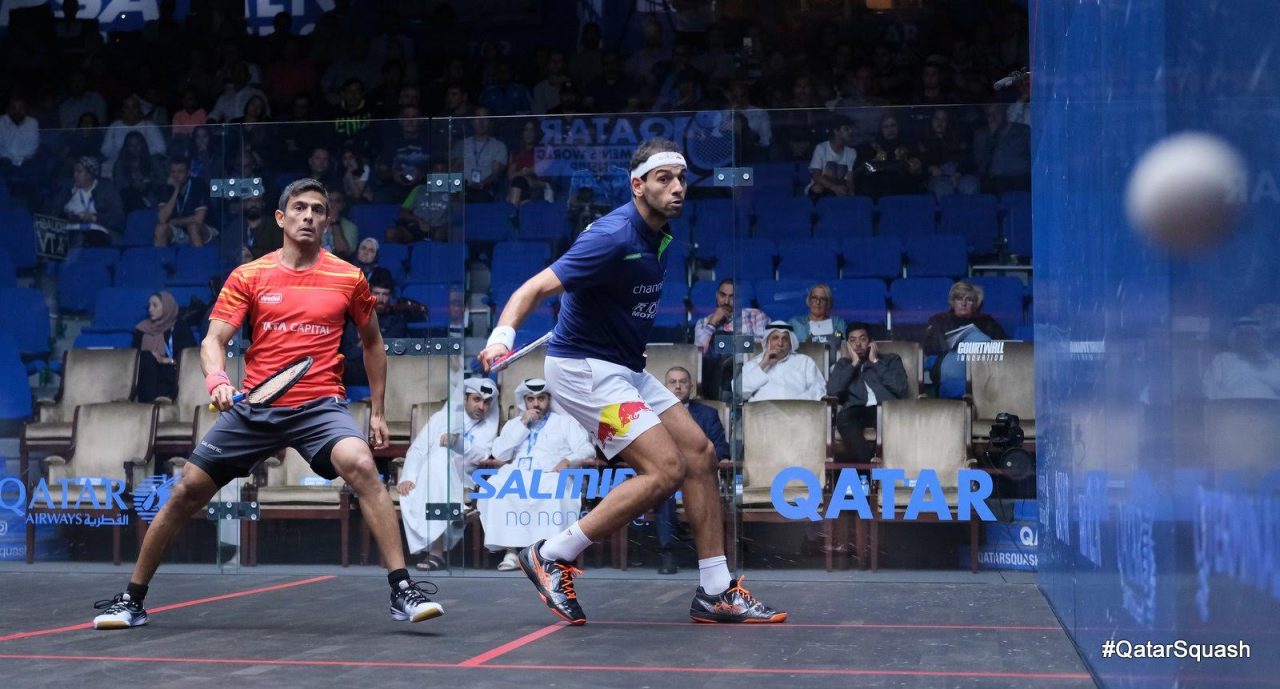