Tony Grifin November 27, 2019 No Comments on Cut down the number of reps to learn and improve faster 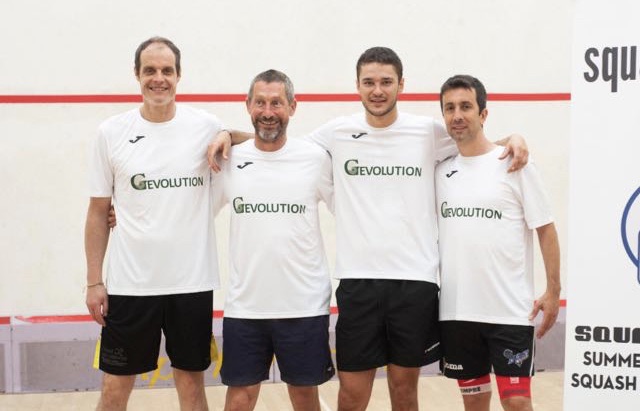 Stephen Hawking once said: “Intelligence is the ability to adapt to changes.” Maybe he was thinking of players like Nick Matthew and Laura Massaro, whose ability to adapt their techniques later in their careers led to them winning World Championship titles, Matthew doing so on three occasions.

In a previous article I introduced Wolfgang Schollhorn’s (University of Mainz) Differential Learning. His sports science research has proved in a wide variety of tests with different sports that repetition is the LEAST effective path to improvement or change.

Since this article I have continued to work on court with low repetitions with all the different shots and now I understand better why doing fewer reps can improve the road to change.

First, it is very important you understand this does not mean by training less you can get better.

Wolfgang talks about doing just three to five repetitions and then changing the exercise. It has become clear to me that it is not the low number of repetitions in itself that leads to the change, it is what happens in our bodies each time we start the new exercise that is important.

It is the process of self-organisation that comes with each change that it important. Each time we start a new activity we are consciously or often subconsciously more focused because we want to get this new activity right.

We make more effort to get our bodies in the right position, we aim to hit the ball to the new target, and this often leads us to watch the ball closer in this start-up moment. All positive measures.

In match play, the process of self organisation is vital and often the difference between winning and losing. We are constantly hitting the ball from different positions, occasionally from similar positions and never the same position as a previous shot (in sports science they say that no two movements are ever exactly the same).

The fact that we never hit the same shot 10 times in a row in a rally also leads me to question the value of continuous repetitions in training.

Doing fewer repetitions in turn creates a higher focus on the quality of the shots. Knowing that the duration of the exercise is limited leads the players to be more focused on their targets.

A few months ago I was working on cross court drops to the nick with a top European junior. I would hit a high boast to just in front of the T so that she could hit the shot. After five shots I asked her to change sides and she gave me a surprised look as if to say “we can’t change now! I’ve only hit five drop shots……”.

After reassuring her that we would shortly return to the forehand to do more, we made the change. After changing sides six times we saw that the one shot she occasionally missed or didn’t hit so well was the first one after each change.

In a match, which of these five drop shots she had practiced is the most important?

Here’s the answer: It’s the first one!

Should we be training to hit the first shot well or doing lots of repetitions in the hope that a good shot appears when we need it?

This is one example of how fewer repetitions and changes have led me to see things from a different perspective.

In the next article I will share some ideas about muscle memory and the retention of skills in relation to Differential Learning.

Tony Griffin is a squash coach from New Zealand who is now based in Barcelona. Author of the squash manual The G-Spot, A Book About Squash. He is now exploring new ways of coaching the beautiful game. Claim to fame? He was at courtside as his friend Ross Norman won the World Open title in 1986. And is now Luxembourg National Coach.