David supreme in NY as she bags title No. 72

Listen to our exclusive post-match interview with Nicol David, courtesy of Kristi Maroc, above

“The ToC is huge,” said the Malaysian superstar after the match. “There is something in the air here. I get goose bumps every time I walk into Grand Central.” 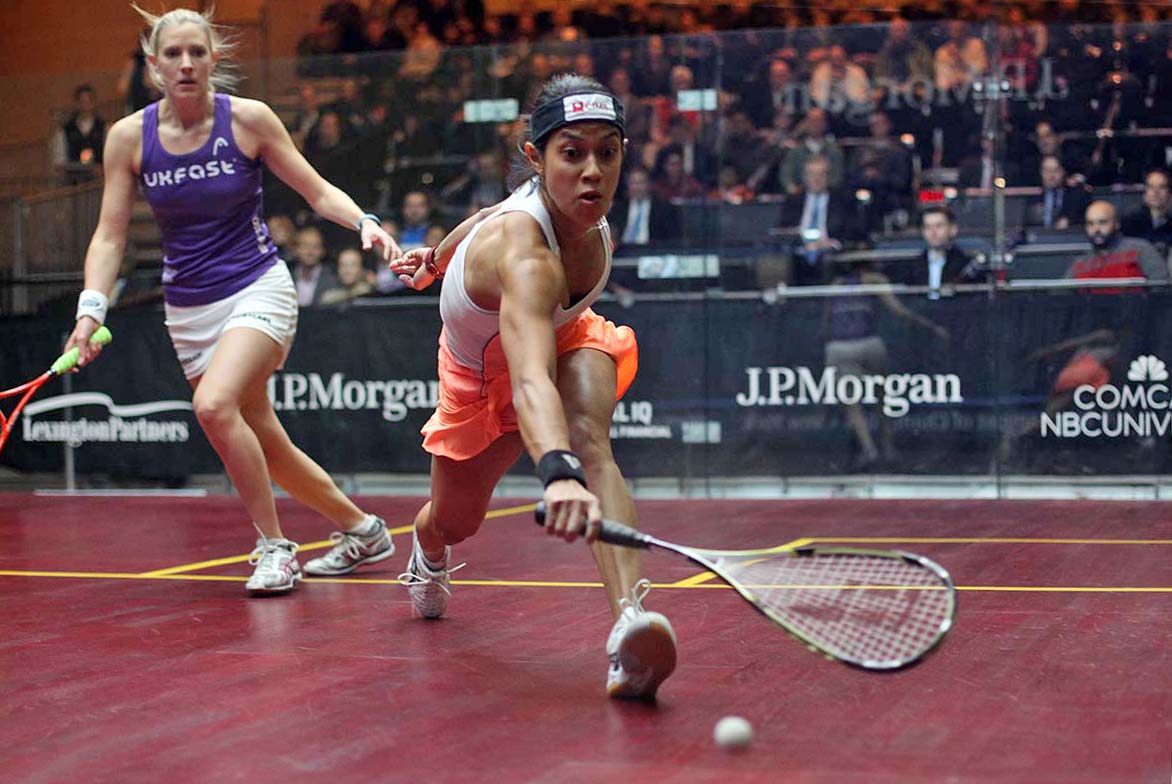 There was a buzz and eager sense of anticipation among the crowd as they took their seats under the majestic chandeliers in Vanderbilt Hall for the women’s final.

This was the first time the most dominant player in women’s squash over the past seven years had competed in the Tournament of Champions and the first time in a decade that the two top players in the sport would contest the final.

“In that first game, both of us were figuring out how the ball was going to play this evening,” David (pictured above) said. “The ball got faster as we were playing, and I was able to play some good, low attacking shots.”

In what seemed like the blink of an eye, David had notched the first game, 11-3.

Massaro was the attacker at the start of the second game. After getting coaching advice from her husband Danny, the English number one took a 7-2 lead by playing more aggressively and moving up in the court.

Just as it looked like Massaro was well on her way to evening the match, David dug in and began chipping away at Massaro’s lead.

“As soon as Nicol’s back in the game at all, she’s like a dog with a bone,” said Massaro. “She doesn’t let go.” The seven-time World Open champion reeled off six straight points to move ahead 8-7.

Massaro evened the score at 8 all. Over the next eight points, David would take a one point lead and Massaro would tie the score. At 9-10, Massaro saved a game ball, but David converted the next game ball opportunity, 11-9.

At the start of the third game, the players exchanged points until David surged ahead, 7-4. Massaro fought back to 6-7 and then saved two game balls when her opponent took a 10-6 lead.

But the top seed was not to be denied the one major title missing from her resume, and closed out the championship 11-8 in the third game.

“I wanted this title badly,” said the 30-year-old from Penang. After the match, she basked in the glow of the majestic chandeliers and the appreciation of a squash savvy crowd who savored the opportunity to see this great champion in action, up close, on the ToC glass court.

Even though she now has 72 WSA titles to her name and has been at the top of the rankings for 89 consecutive months, the 2014 ToC champion is still enthralled with her sport.

“I have learned so much from this sport, and I am continuing to learn,” she said. When asked her most important lesson, David replied, ”How to trust myself and do what I am capable of.”

The fortunate spectators who crowded around the McWIL court at the 2014 J.P. Morgan Tournament of Champions were thrilled to witness that capability as Nicol David did what she does better than anyone else in the world – win yet another squash championship.

Listen to our exclusive post-match interview with Laura Massaro, courtesy of Kristi Maroc, above 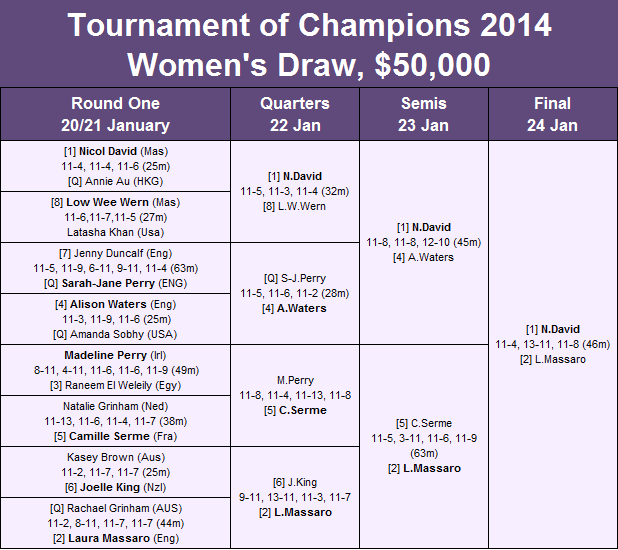