The host nation, seeded second, got through after beating Hong Kong 2-0 in the semi-finals at the National Squash Centre, Bukit Jalil. It was however, far from a walk in the park as Hong Kong took the fight to Malaysia, especially in the first string match between Aifa Azman and Chan Sin Yuk. 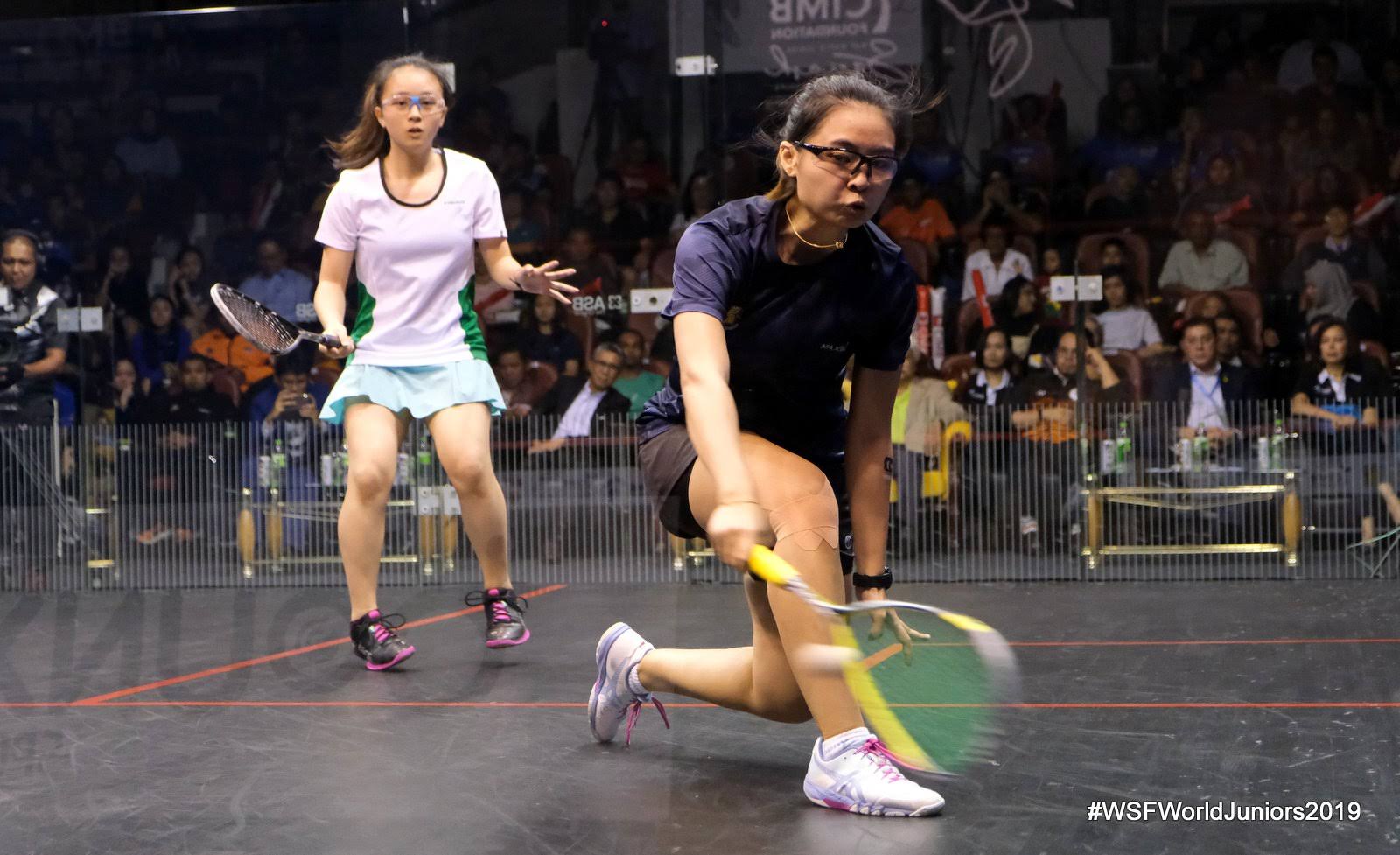 Chan Yiwen (r) gave the hosts a perfect start with a commanding win, finishing off the match with a forehand slam into the nick.

The pressure and nerves were apparent from the second game as she gave out eight errors to allow Sin Yuk a lifeline. 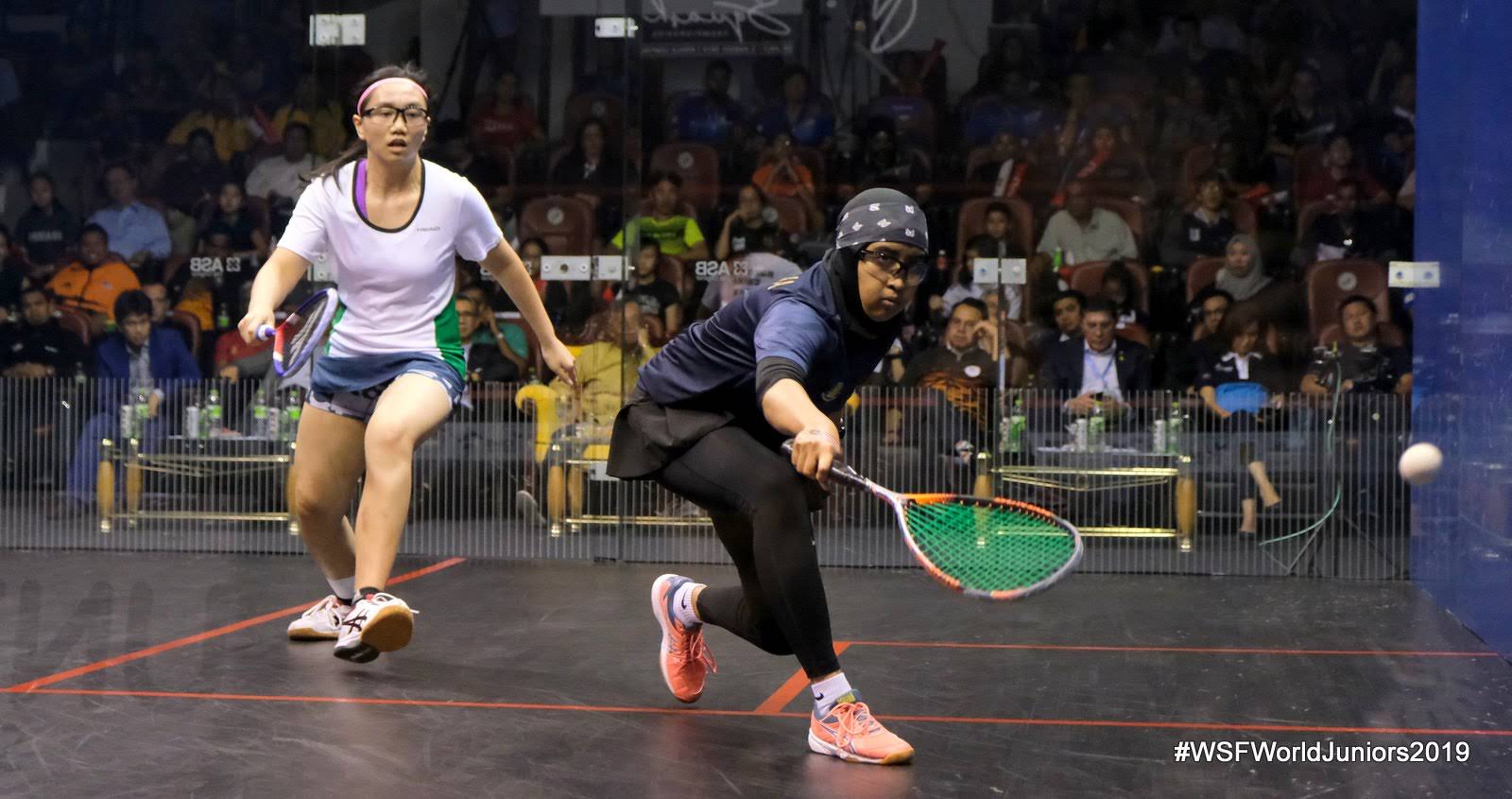 It was a match of nerves for Aifa Azman, the Malaysian number one against Hong Kong’s Chan Sin Yuk.

Then from a 9-2 lead in the fourth, Aifa somehow managed to squander four match ball opportunities, an eerily close reminder of how she lost in the individual semi-finals to Jana Shiha, to allow her opponent to force a deciding rubber.

Aifa nearly blew it again in the fifth as she allowed the Hong Kong player to catch up from a 9-4 lead before taking the win, much to the relief of the home crowd.

“This totally felt like the match against Jana. I was 9-2 up in the fourth and then 9-4 up in the fifth and all the thoughts of injuries clouded my focus since I took a few falls,” admitted Aifa.

“But I managed to overcome my fear in the end and I think I did well to finish it up.

“It was definitely a tough game as Sin Yuk is a player who doesn’t give up easily. It’s not so much about the pressure but more of my focus when I was just two points away from winning.

“But I’m just relieved to lead the team through and I believe I won’t be so scared or nervous in the final since I will be the underdog. The plan is to give more than 100 percent for the team tomorrow,” added Aifa. 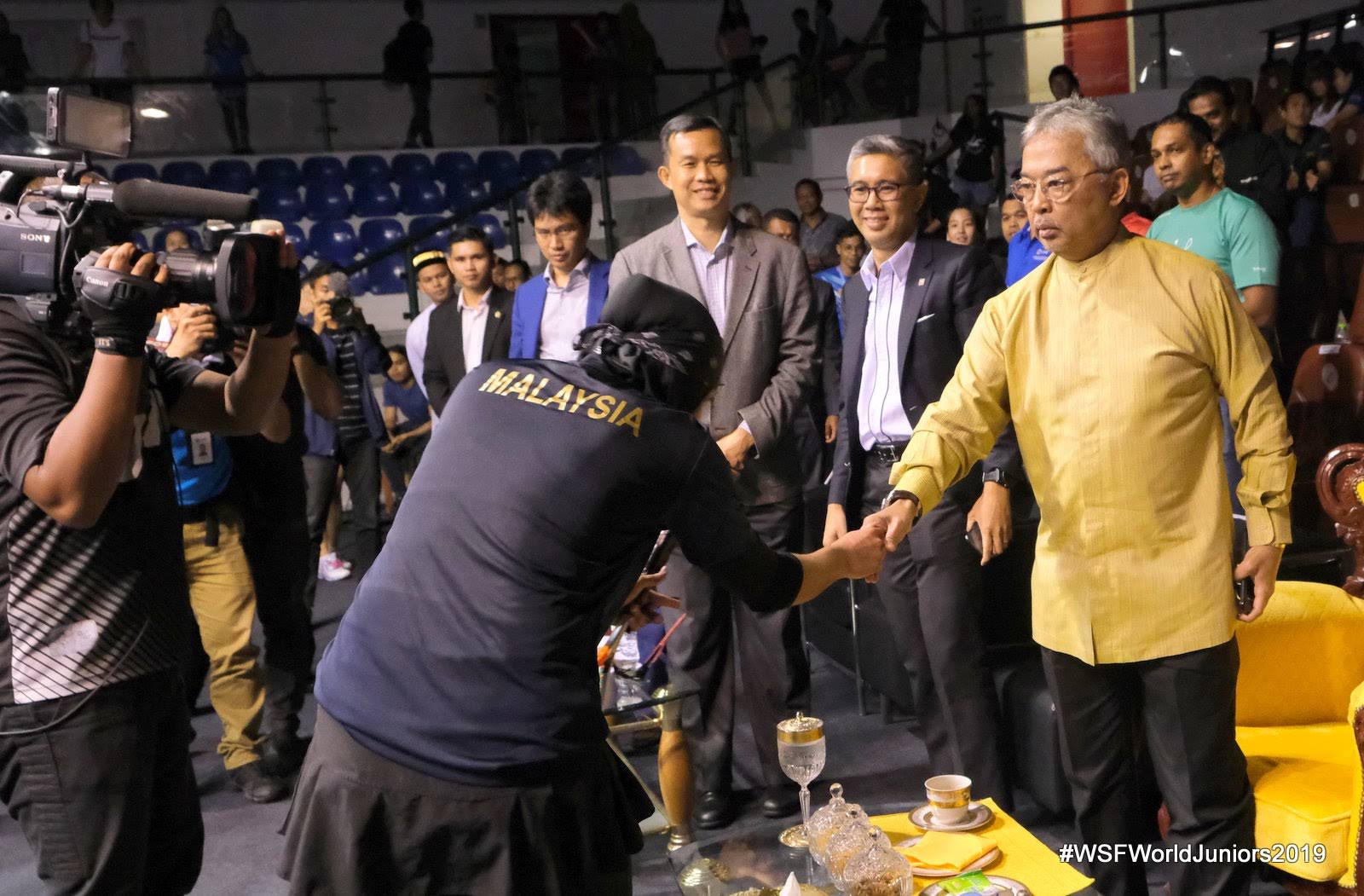 Aifa Azman being congratulated by His Majesty The King of Malaysia, Sultan Abdullah Ahmad Shah after her close win to seal the tie for Malaysia.

The win means Malaysia qualify for the final for the second straight edition since finishing second in 2017 and national assistant head coach Andrew Cross, who looked decidedly edgy at one point, believed the nervy win served as a good experience for his girls.

“It’s all credits to Sin Yuk. She never gave up and kept coming back. She’s had a good week but it’s also a good experience for the players – to never give up,” said Cross. 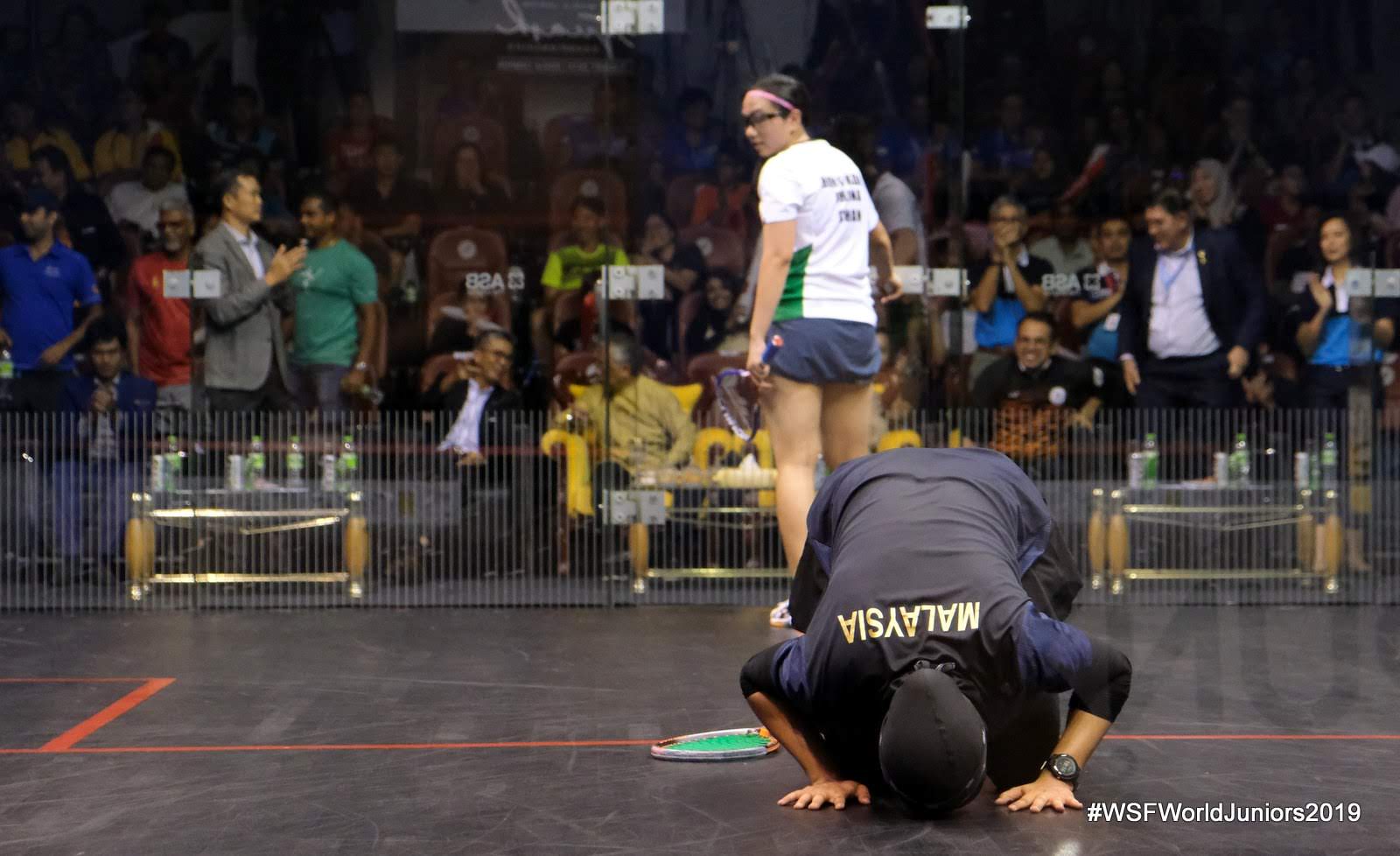 It was relief for Aifa Azman and the packed home crowd in the gallery after the winning point.

“It got a little edgy when Sin Yuk came back in the fourth and then in the fifth when Aifa tensed up a little and lost her focus. But it’s a lesson to her and we’ll take it on and regroup for the final.

“Additionally, it’s really good that we’re back in the final again. It shows good continuation for us in development to be constantly there every two years and not disappear after a good year.”
Meanwhile top seeds and defending champions Egypt showed their quality with a convincing 3-0 win over England. 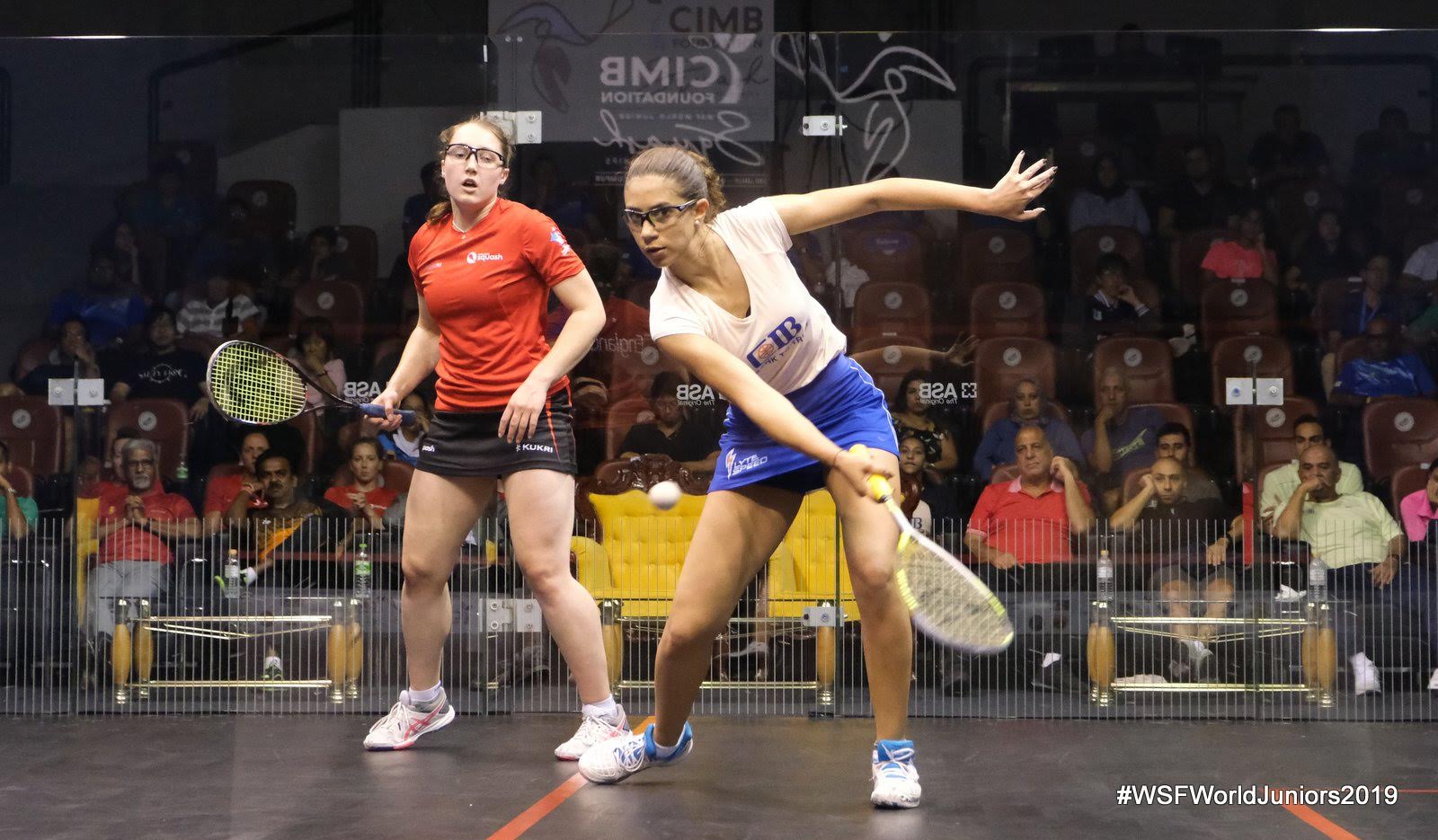 Jana Shiha (r) beat a tired-looking Alice Green in clinical fashion to give the favourites the lead.

Jana got the eight-time champions off to a brilliant start by beating Alice Green 11-7, 11-4, 11-4 before recently crowned world junior champion Hania El Hammamy powered past Elise Lazarus 11-2, 11-5, 11-5. Farida Mohamed completed the win by beating Evie Coxon 11-7, 11-5 in the dead rubber.

“I think physically and mentally, we’re all a bit tired and feeling a sore. I love to go home now but the team is important for the country and we’ll do everything we can to finish strongly,” said Jana Shiha. 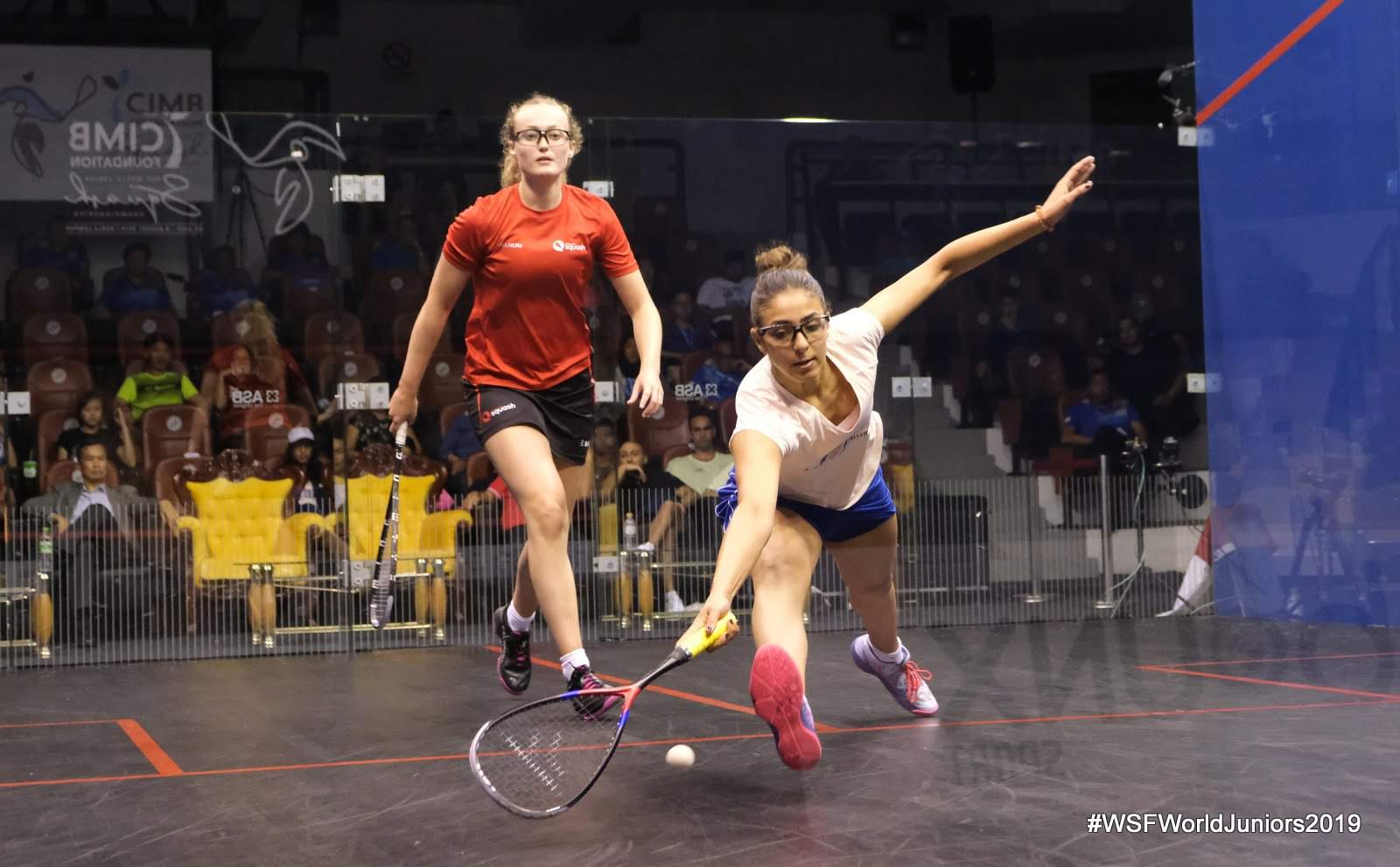 Added Hania, “I think I performed well today and I’m happy with my performance. I think the final against Malaysia will be the toughest match, especially from a mental perspective.

“I think this is because I’m the only one in this team who played in the last team event two years ago. So hopefully, the rest of the team can be prepared mentally. We’re all pushing each other because we really hope to win tomorrow.”

Egypt will be gunning for the seventh straight title while Malaysia, in the final for only the fourth time, will looking to finally land the coveted title.

Meanwhile in the 5th-8th playoff, India downed Australia 2-0 and will meet USA, who defeated Switzerland 3-0, for fifth placing.

In the 9th-12th playoffs, Canada are looking good to finish in ninth after recording two wins so far and they just need to finish strongly against France.

In the 13th-18th playoff, Sweden downed Ireland and will face Japan for the 13th spot.