Alex Wan September 14, 2016 No Comments on Elvinn Keo hits it big in Macau

Malaysia’s Elvinn Keo secured the biggest win of his career when he outclassed his higher ranked Australian opponent Joshua Larkin. Playing far better than he did in the previous round, Keo dictated the rallies from the start and it was the Aussie who was doing most of the work from corner to corner.

Keo’s patience on court today was evident and he was rewarded with a place in the main draw with an 11-6, 11-6, 11-5 win after 28 minutes. It’s also worth a mention that his flamboyant did come into play in the end, where he finished the match with a forehand slam into the nick and on match point, a topspin backhand drop way beyond Larkin’s reach.

When asked what was different with his game today, the 28 year old Penang native said, “I got more used to the court compared to yesterday and I’ve never played Joshua (Larkin) before, so I was a lot more focussed on my game plan. I was disciplined and focussed throughout the match, being more patient and kept the pressure up. I had to keep myself calm throughout as I have a tendency to lead, then fall behind and having to chase again.” 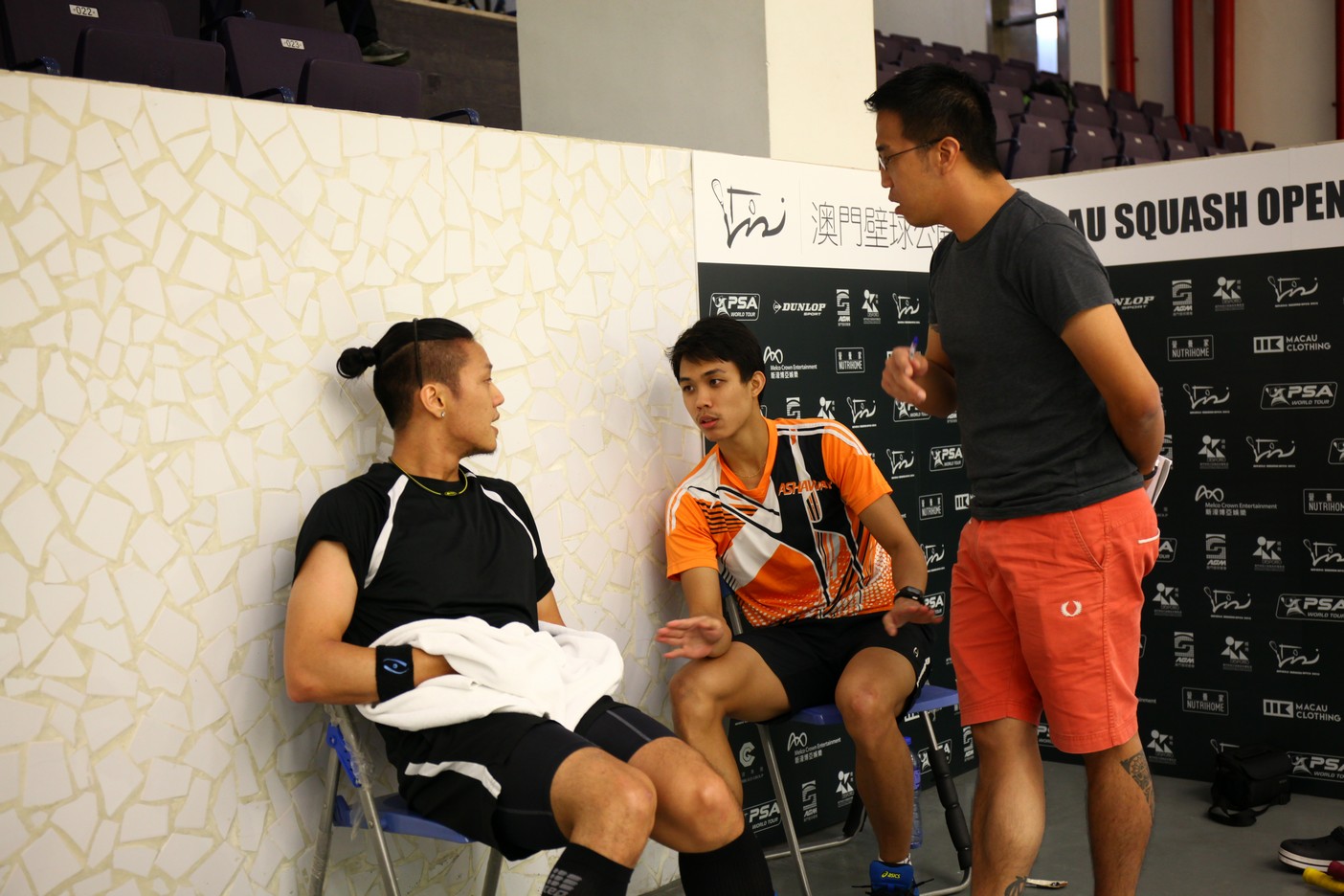 Elvinn Keo gets a little help from friends

Joshua Masters was the first to check into the main draw when he beat a stubborn Ko Youngjo of Korea. Both men contrast in size but it was Masters, the bigger of the two seem to have done more painful work in the court.

Masters started well and in quick fire time, he went from 4-2 to 8-3 up before the Korean came back up to a point at 9-8 before the Masters got to game point with a low backhand kill, after which he would convert after a no let decision went against Ko.

The next two games were split one each, Masters winning the first to go 2-up before Ko hit a patch of brilliance with some very sharp finishing to win the next 11-5. The fourth game was neck to neck most of the time and Masters would eventually clinch it on a tie break 12-10. 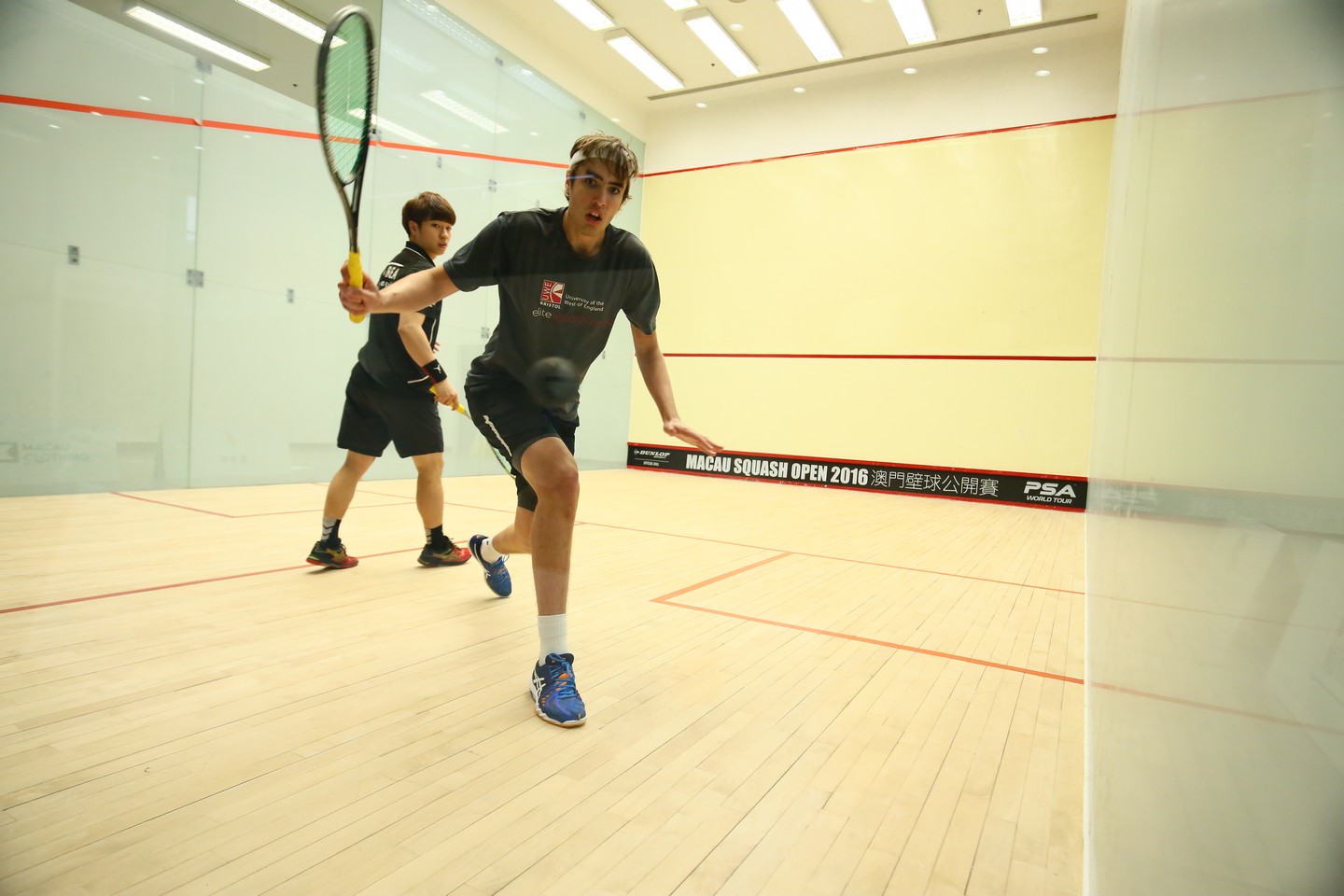 Josh Masters his way through into the main draw

Harinder Pal Singh Sandhu and James Huang played the last match of the afternoon and before the match begun, a referee had commented that this was going to go all the way and anything less than an hour would be considered short.

True to his words, it went to five games and lasted a little longer than “short” – 61 minutes to be exact. Both Singh Sandhu and Huang are known to chase the ball down very well and so the rallies were mostly long. It was definitely not the most pleasing match to watch but the athleticism of both is surely a sight to behold. In the end, it was Harinder Pal Singh Sandhu who would walk out in victory over the Hong Kong based Taiwanese. 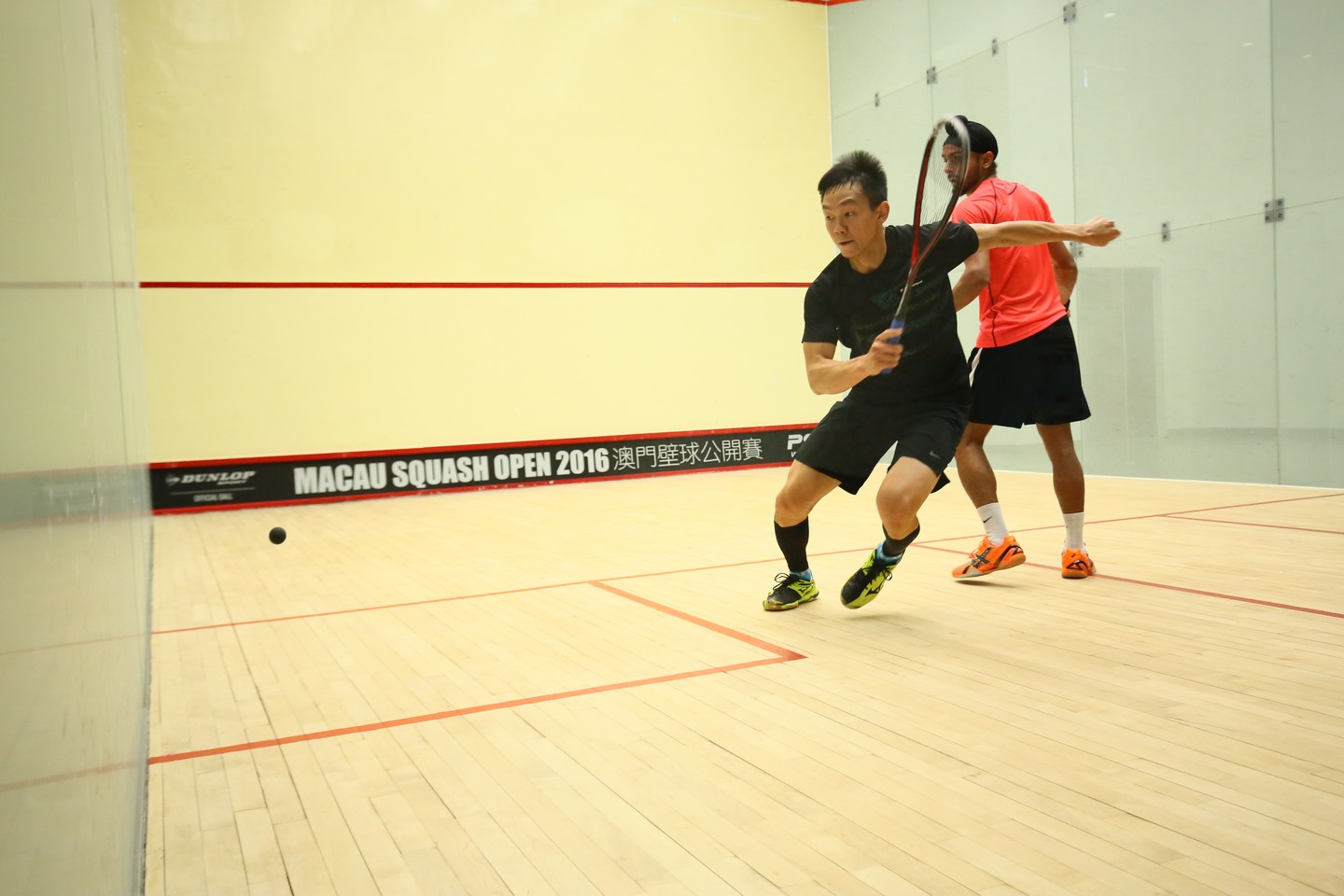 The last to check into the main draw was Joel Malkin, but he was surely also the quickest. Additionally, he must also be one of the most “efficient” qualifiers in history as he dropped only a single point through his two qualifying matches. After giving local Vang Keng Hei a beating at the loss of the single point a day before, his opponent today, Hong Kong’s Wong Chi Him withdrew from the match after falling ill.

It is not often to see only a single Egyptian in the main draw of an event of this size – in this instance, Heba El-Torky, the seventh seed. However, all three Egyptians won their matches today to join their more illustrious compatriot tomorrow.

First on was qualifying top seed Mayar Hany, who took out Hong Kong’s top junior Bubble Lui in just 21 minutes. While the duration may indicate an easy game, it had its ups and downs as both players were playing well in patches.

After winning the first two games rather comfortable, Bubble Lui came back down impressively to snatch the third game 11-4. Playing some very clever squash, she orchestrated her rallies to set up her chances which she deftly finished off.

However, in the following game, the Hong Kong junior had a disastrous start and in no time found herself trailing 0-8 after Hany found her range once again to completely assert her ways. While Lui staged a comeback, it was a little too far to catch up and it was 11-4, 11-6, 4-11 and 11-5 to the Egyptian. 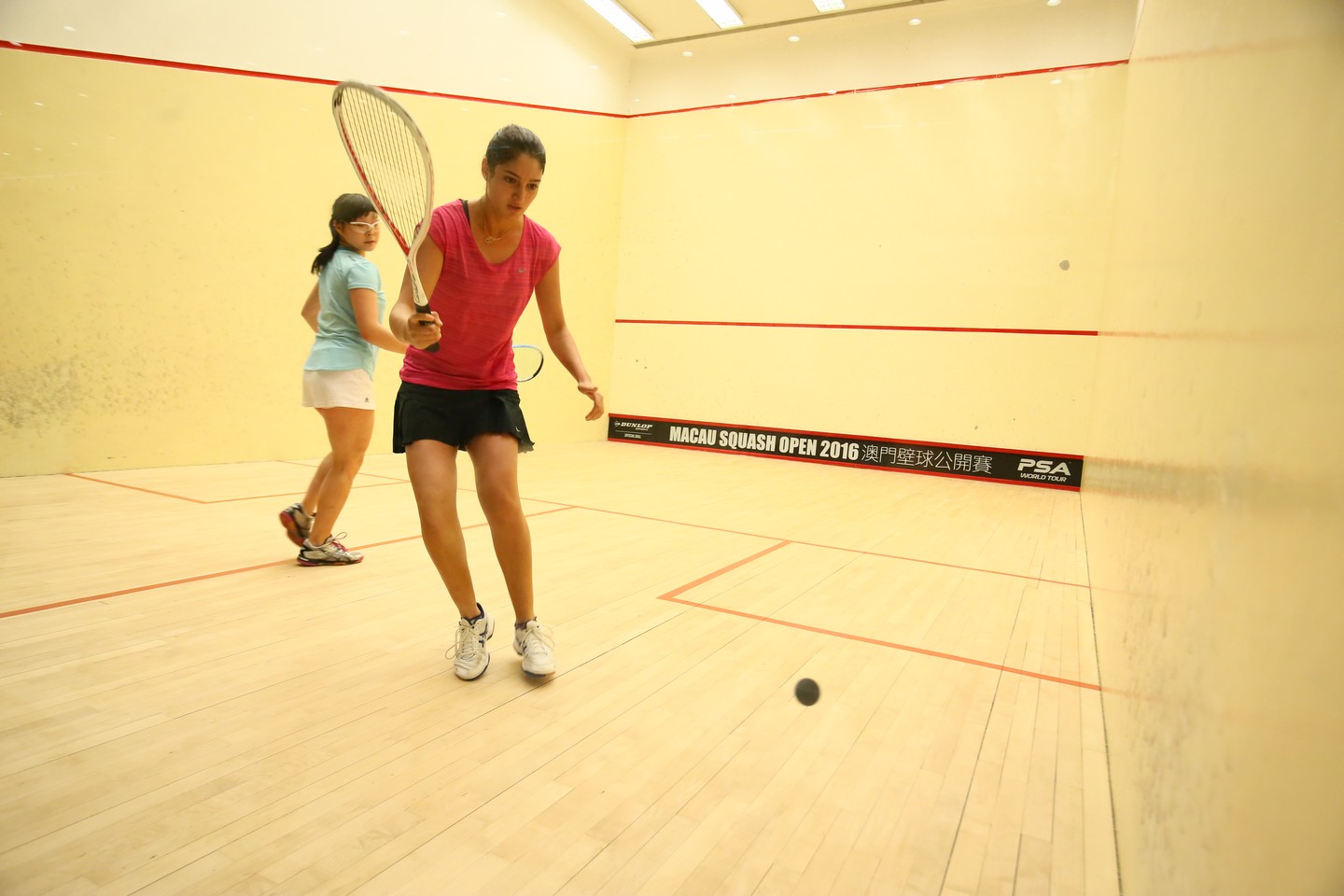 Hana Moataz then made it two Egyptians when she upset South African Cheyna Tucker, the qualifying 3rd seed and world number 69, in straight games. The first two games went in similar fashion with both players never more than two points apart up to 6-6, and the Egyptian would break away to 11-6.

The third game was the most exciting as rallies would now be longer and the points going to either player more equally. It took six tie breaks from 10-10 before the game, and match was decided after Moataz, the world number 85 finished off with a low cross court backhand kill. 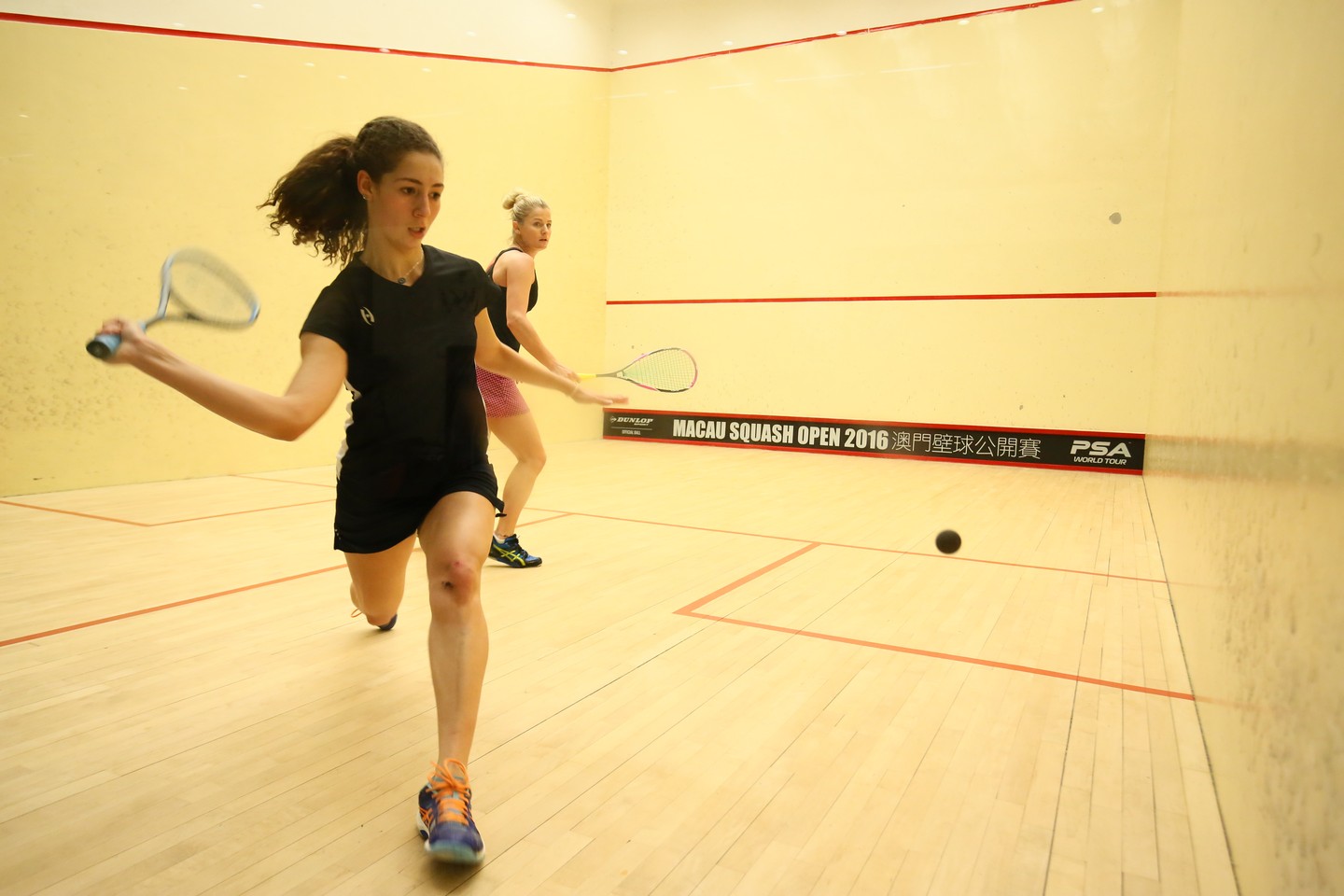 Nada Abbas then made it three out of three for Egypt after she won the battle of the teenagers. Her opponent, Hong Kong’s 15 year old Chan Sin Yuk, had a day earlier had took out another Egyptian. But today, the 16-year old from Giza made sure that did not happen.

Abbas took three games to seal her place in the next round, but the opening and third game were close. Abbas had dictated the flow of play for a big part of the match but Chan did respond with some brilliant kills of her own, often from the forehand side aimed low, but again it just wasn’t enough. 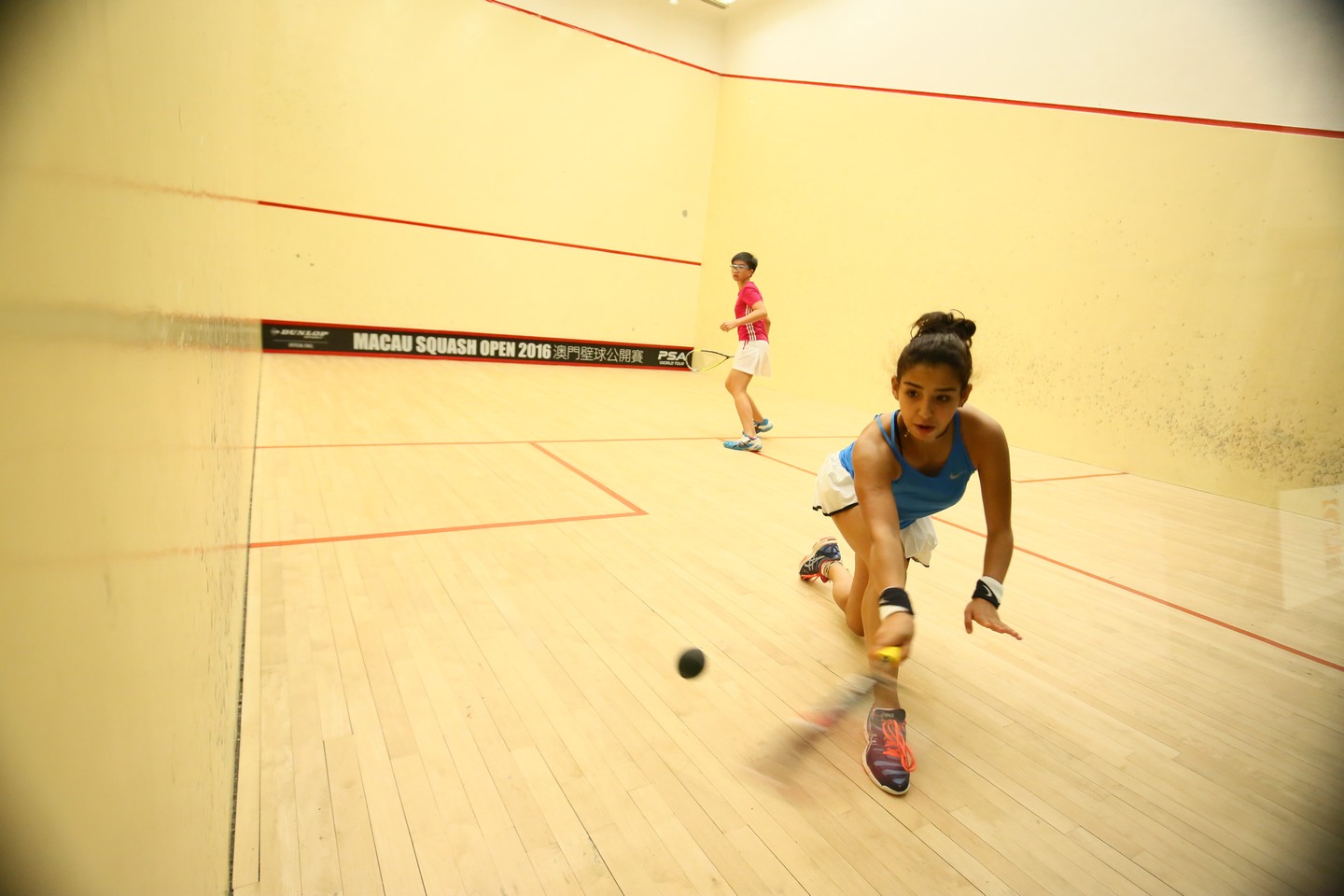 In the last match of the ladies event, Siyoli Waters of South Africa ousted Carmen Lee of Hong Kong in straight games. After a competitive first game and a little in the second, it was pretty evident that the 24 year old Lee was not match fit and would concede the third game tamely. 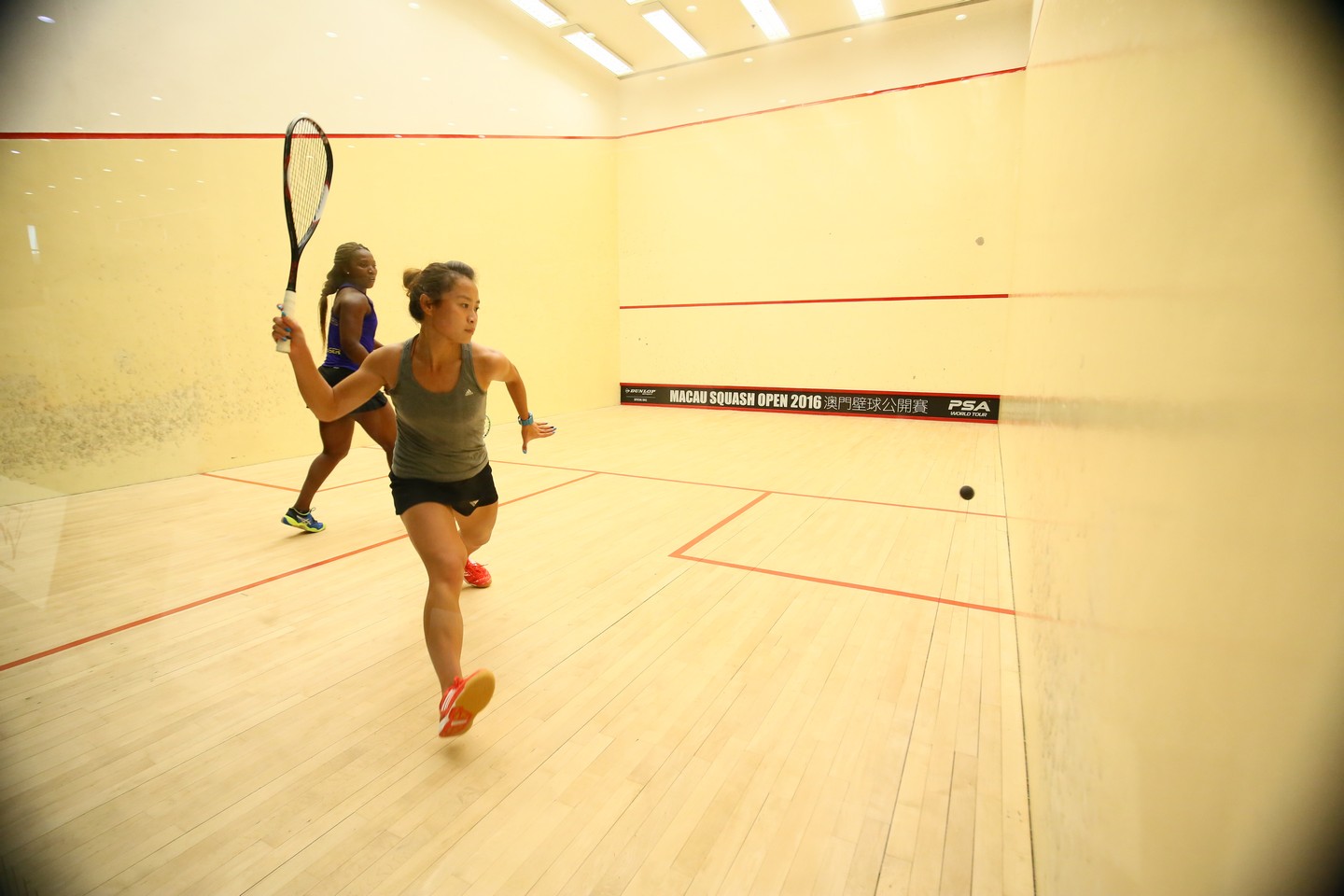 The poster girl looking Lee said later, “I haven’t trained for a while now that I’ve stopped playing professionally. I played alright but I just don’t have the fitness anymore. I’m happy with how I played in the first game, but not after that.”

Photos from the Opening Reception