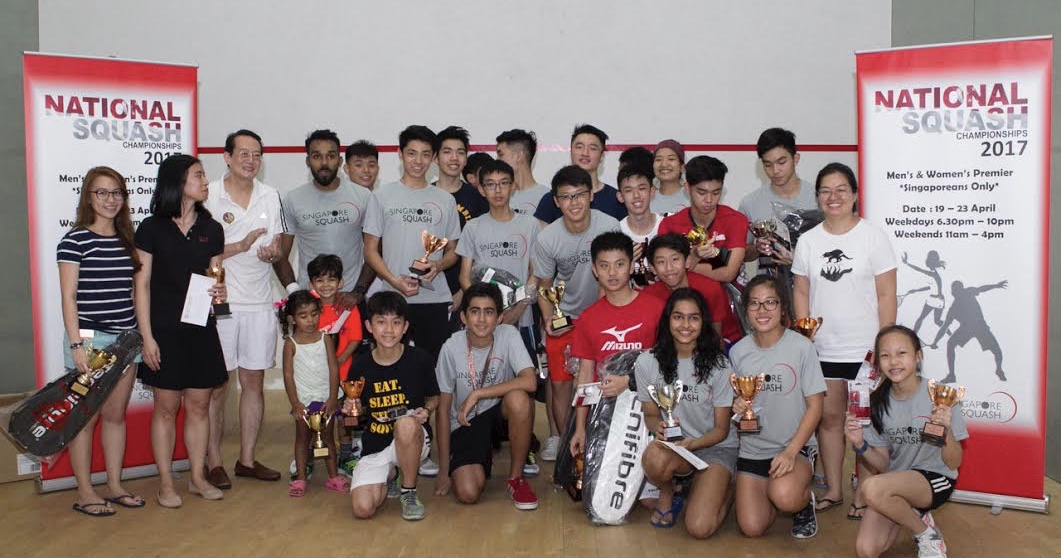 All the finalists line up at Kallang

Seasoned campaigners Vivian Rhamanan and Mao Shi Hui both won their fourth Singapore national titles respectively after both took out their much younger compatriots and first time finalists at the National Squash Centre in Kallang. After the event was not held for the last two years due to low entries, the emergence of two new finalists in the event was certainly a good sign of the squash future on the island.

Vivian Rhamanan won the men’s event after defeating surprise finalist Benedict Chan in three games. Vivian, who also won the title in 2008, 2013 and 2014, put his experience to good use to overcome his 20-year old opponent.

The first game was a tight affair, with both players attacking when opportunities arise and it was point for point till 8-8, before the 31-year old Vivian played the last few points brilliantly to sneak the game home.

The second was a one-sided affair, as the 31-year old Vivian moved up a gear to fasten the pace and took his space on court to great effect, which seemed to have rattled his younger opponent. It was 7-0 before Benedict won his first point but the gap was far too much by now and Vivian was 2-0 up.

Vivian continued with his barrage of attacks and read Benedict like a book in the third. Benedict, known for his flair and unassuming style of play, could not trick Vivian with his flicks and found himself match ball down 10-3 very quickly.

But he was not done and played beautiful squash to win six points in a row to close the gap to a single point. However, he came just short of drawing level as Vivian manages to take the game and match with a tight forehand drive down the line, which Benedict’s appeal for a let was turned down.

It was not a fairy tale ending for the 20-year Benedict, but it was a good run for him as he had taken out tournament favourite Samuel Kang the previous day in an interesting 5-game thriller.

In that match, he had attacked every single ball he could reach with such confidence and had the top seed in retrieval mode all through the five games. It certainly did not help that Samuel was playing in such a passive manner and not hitting the ball with enough intent.

For Samuel, it was a bad week in the office as he was once again upset in the third placing play-off by Pang Ka Hoe.

In the women’s event, two-time champion Mao Shi Hui repeated her win over teenager Sneha Sivakumar in the group stages once again. Having beaten the 16-year old a few days ago 3-2, the 25-year old Shi Hui won 3-1 today.

The match started off at a furious pace expectedly, as both players have a similar hard hitting style. The first two game were very close, both players trading points and never allowed each other to break away, with Shi Hui winning a notable number of points from the surprise backhand drop from the back. Both games went to the tie-break and honours were shared by both players.

One game apiece and Shi Hui put her foot down on the accelerator to be in command in the third. It was fast and furious, and she never looked back, taking the game 11-3 in much easier conditions than the first two games.

The third was much better challenged by the teenager, but experience and lesser mistakes from the older of the pair wins the game, and match for her fourth national title to add to her titles from 2010, 2011 and 2013. It is also extra sweet for her as she had only recently begun training again in preparation for the South East Asian Games in August.

Like Benedict, it was a good week for the bright 16-year old Sneha Sivakumar. While it is not a surprise to see her in the final, she had saved five match balls in her semi-final against veteran Pamela Chua the previous evening. Coming back from 6-10 down in the fourth, she wins the game 15-13 before completing the win 11-7 in the fifth.

While it is promising to see a 16-year old in the final of the national championships, there is clearly a big gap in the women’s game in Singapore. There were only six entries, with only the top four ladies really able to challenge each other.

Of the four, two of them are only in training to prepare for the South East Asian Games in August and are likely not to continue to do so after that.

Women’s participation in the game is certainly an area the SRA ought to look into seriously in the next few years.