Good people, doing great things for the game (and their communities)

Alan Thatcher October 17, 2019 No Comments on Good people, doing great things for the game (and their communities) 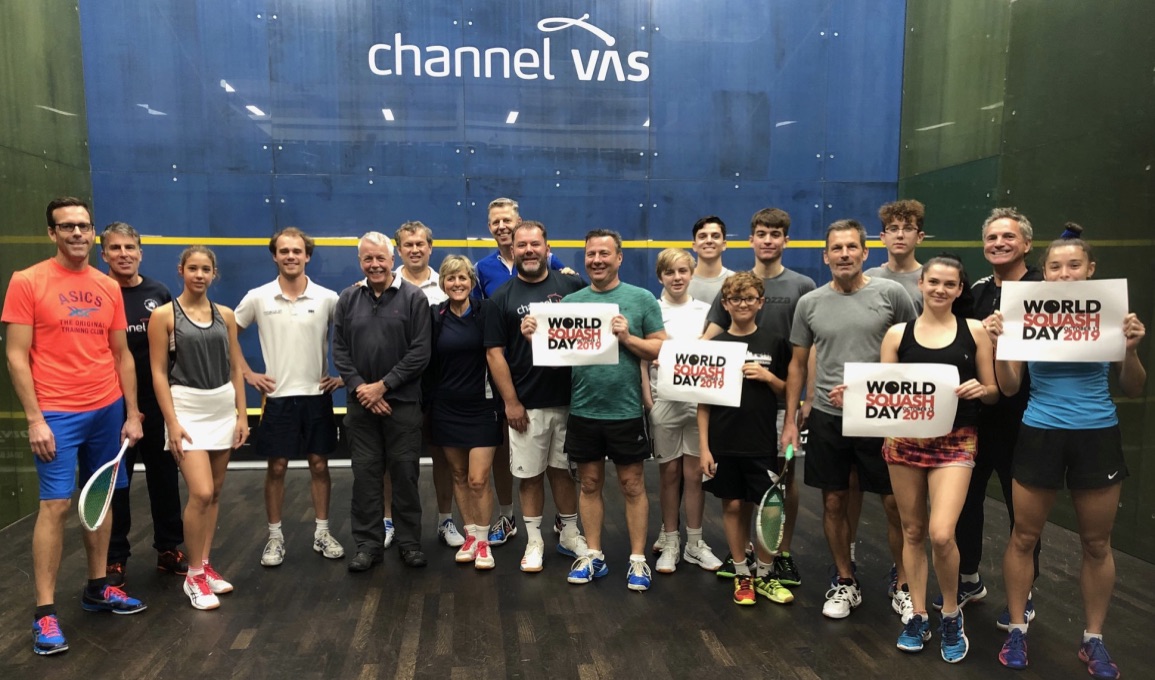 Tribute to those behind World Squash Day events that reap social change and raise funds for good causes
By MIKE GREGSON, ALAN THATCHER and JAMES ROBERTS

As a lone heron glided gently to its evening repose beside the swift-flowing River Ness, and the pipistrelles’ calls echoed through the willowbanks, there, unmistakeably, came the thump-thump-thump of ball on wall: yes, the squashies were at play again.

Although World Squash Day was not as big across Scotland as in England and Wales, nevertheless two clubs, at opposite ends of the country, really went to town at the weekend to promote our great sport (writes MIKE GREGSON).

Down south, Lockerbie Squash Club had a busy time, with fun sessions and guest coaches Paul Bell and Lisa Aitken from Scottish Squash helping out.

And in the Highland capital, Inverness Tennis and Squash Club was buzzing with activity, with a 24-hour Squash Marathon (Friday 19.00-Saturday 19.00) forming the centrepiece of a festival of squash for young and old.

“We had our doubts,” said Squash Captain and event driving force Alastair Kirkland. “Oh yes, we did have doubts about a 24-hour, non-stop game. Our courts are warm, and rallies can go on a bit. So we did wonder if people could keep going, even for ½ hour slots. Especially in the middle of the night.

“But I think everyone knew how important this was – not just for squash and the club, which we all love – but also because the event was a fundraiser for our neighbours the Highland Hospice, who do such valuable work here in the Highlands.

“Things went fantastically well. Luckily we had enough insomniacs and squash addicts: in the end we were able to fill the slots, and more – we gave some folk a wee break by having subs on both sides at various times. Then we had fun stuff all day Saturday – kids’ sessions, fun doubles, taster ‘come and try it’ sessions, plenty of food and drink, and, frankly, we were inundated. And delighted.

“So, World Squash Day, for us at least, has been a great event, and we look forward to more opportunities to grow the game here in the Highlands, just like so many clubs across the UK.”

The Inverness marathon provided a very special trans-Atlantic link on World Squash Day. Scotland’s Greg Lobban and New Zealand’s Campbell Grayson joined renowned English coach Nick Taylor at his Infinitum Academy in Boston, Massachusetts, as they coached a large group of juniors before taking to the court for an exhibition match.

Another amazing collection of signed squash memorabilia has been amassed again this year by the organisers of the official World Squash Day Auction, held in conjunction with the PSA Foundation.

Previous auctions have raised thousands of pounds for good causes, including UNICEF and the Aberystwyth Chemotherapy Unit in support of dedicated squash coach John Batty, who sadly lost his battle with cancer earlier this year.

Star lot billing undoubtedly goes to a World Squash Day shirt which has been signed by many of the top pros who competed at the recent major PSA World Tour tournaments staged in Nantes and San Francisco.

Other lots include the match ball used in this year’s British Nationals mens finals signed by both finalists and signed Birmingham Lions and Warwick/Kenilworth Premier Squash League shirts.

Further lots are still to arrive from the likes of Nick Matthew and Daryl Selby, who have both pledged donations. French star Coline Aumard has also promised to send in a signed shirt.

Watch out for news of the World Squash Day auction, coming soon on social media. 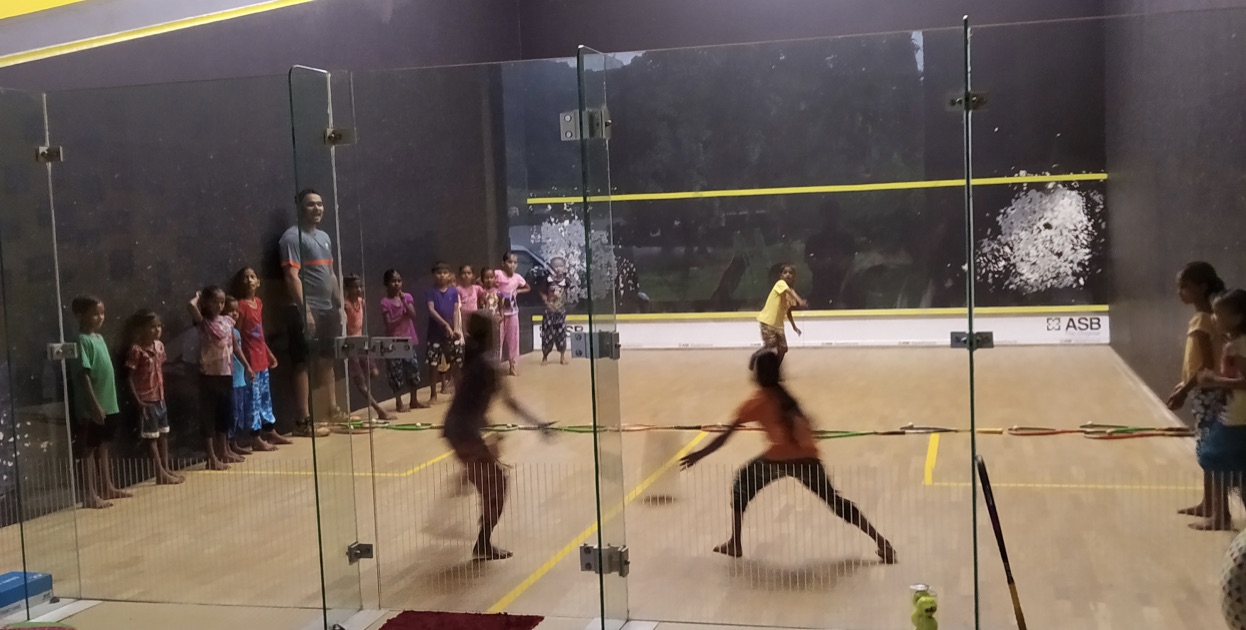 Many events on World Squash Day not only raised money for good causes, but also addressed human rights issues in various parts of the globe.

These involved squash projects providing opportunities for poverty-stricken children and attempting to change the culture in some countries where religious oppression has restricted access to sporting activity and education for females and those in poverty.

A recent article on Squash Mad revealed the phenomenal work being undertaken by former Indian number one Ritwik Bhattacharya and his Start Academy introducing squash to tribal children around Mumbai.

Their World Squash Day programme was a clear indication that the sheer joy of playing a game like squash is having a massively healthy impact on so many young lives.

Current Indian number one Saurav Ghosal spoke warmly of the effect Ritwik is having on squash in India.

He wrote: “Ritwik was the first true professional squash player in India and his journey on the PSA Tour definitely showed me the way forward. His contribution in that regard both on and off the court must never be forgotten!

“Post retirement, Ritwik is doing a great job in giving back to squash. It fills me with immense joy to see him helping kids realise their potential on the squash court.

“He’s also helping a lot of kids who wouldn’t normally have access to play squash. I hope he can carry on the good work and produce champions for India in the future!”

Bhattacharya is certainly a long way down that road, with several of his Academy students expected to do well in the forthcoming Indian National Championships.

Elsewhere in India, the Rolling Nicks Squash Foundation partnered with World Squash Day to highlight their programme which delivers free squash lessons to “kids from humble backgrounds” in Pune. 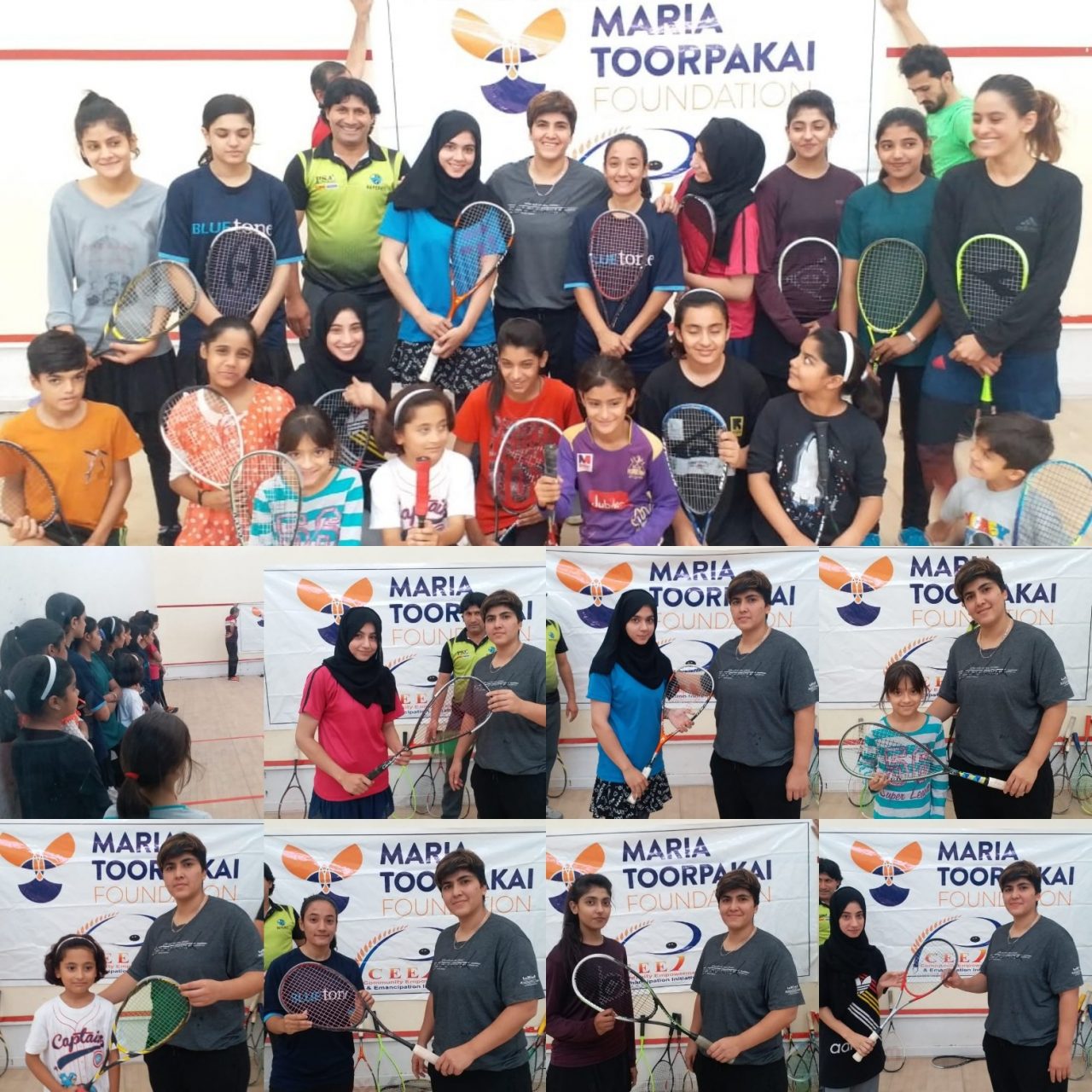 Across the border in Pakistan, Maria Toorpakai Wazir hosted an open day for girls in Peshawar. Maria famously fled Pakistan and moved to Canada after being attacked and victimised as a child for wanting to play sport.

She is now a United Nations ambassador, campaigning for human rights across the globe, and her event hopefully illustrated a long overdue revision of toxic religious traditions dating back hundreds of years.

She said: “We distributed sports equipment and squash rackets among girls in Peshawar. We were pleased to welcome a few children with disabilities. Every girl, every child should feel included, encouraged and supported.”

She then tweeted support for the World Squash Day event held in Iran, which also showed a large number of females taking to the court.

The strict religious regime in Iran had recently overturned a ban on allowing women to watch football matches after a campaigner set herself on fire in fear of being jailed for dressing up as a boy to watch a game.

This is a theme with which Maria is more than familiar, having dressed up as a boy when she was a child to join squash lessons.

The relaxation in laws in Iran came after FIFA had threatened to expel Iran for their men-only stance. 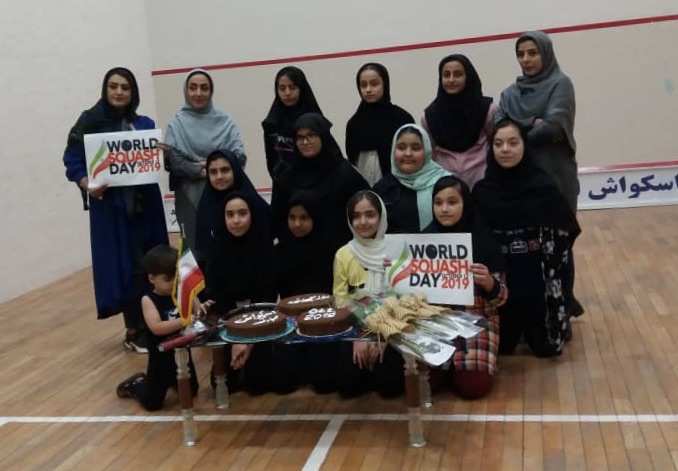 You can use chalk to draw simple floor markings to act as target areas, making it an ideal introductory game to squash at absolutely minimal cost.

Anyone wishing to explore this brilliant concept should look up Marcel Straub on Facebook or check out www.streetracket.net 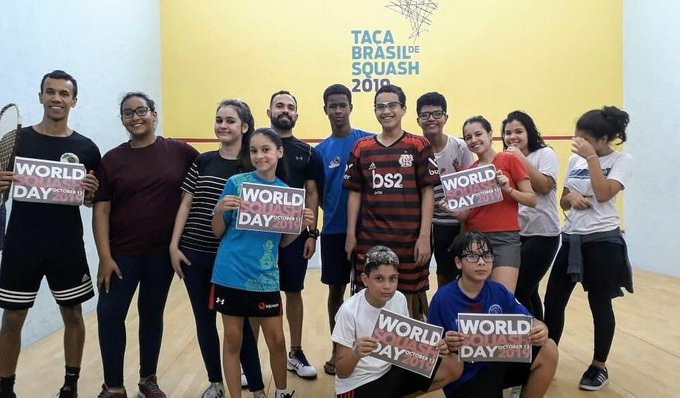 Squashinhos project on court in Brazil

The Squashinhos project in Brazil took to the courts to provide exercise and education in a safe environment for children in Rio de Janeiro.

He has launched a Just Giving page to raise funds for the project and said: “Squashinhos is a sports and educational development project which helps suffering children from communities in Rio de Janeiro. Three times a week they receive English and squash lessons.

“The aim is to create a healthy learning environment for these children, opening their eyes to another world away from drugs and weapons.”

A massive day of activity at Exeter Golf and Country Club helped to raise £235 for The Louisa Cary Trust. Exeter stringer and coach Jon Sharpe said: “The Trust was set up to raise money towards a children’s ward at Torbay Hospital in Devon, where Ioan, my 13-year-old son, spent nearly two weeks as a one-year-old when he had meningitis.

“He very nearly didn’t make it and was too ill to be airlifted to Bristol, so they performed miracles to pull him through and he had a nurse with him 24 hours a day for the first few days.

“Despite also having cancer at the age of six and spending half his life staying in hospital until that age with complications, he’s now made a full recovery and plays squash for Wales.

“So, essentially, it’s a charity really close to my family and has given my son the opportunity to play this great sport!”

They are also planning a two-day event at Connaught on November 2-3 to raise extra cash to go towards a health centre and secondary school in Central Uganda, plus offering support for projects to improve employment opportunities.

Footnote: These are all amazing stories of kindness and selfless dedication to help good causes. To the organisation who “donated” an object to the PSA Foundation Auction, and then demanded £35 from the friend of a friend who turned up to collect it, words fail me.