Alex Wan September 23, 2019 No Comments on Hania El Hammamy speaks about her future after winning the coveted junior title

It has taken her five attempts and three finals to get there, but after playing second fiddle for two consecutive times, Hania El Hammamy can now proudly claim her title of World Junior Champion.

The 19-year old was looking very focussed and dominant for most of the event in her last World Junior event. She dropped just one game in the semis against compatriot Farida Mohamed en route to her title, before leading Egypt to their ninth world junior team title.

The 19-year old world number 15 had already been a force to be reckoned with on the senior tour, having been into the top 50 since 2016 and is also the only top-25 player who was born in the current millennium.

This year, she also won back-to-back titles, twice upstaging the event top seeds at the Edinburgh Sports Club Open and after that, at the PSA Challenger 30 Bahl & Gaynor Cincinnati Cup for her biggest career title to date.

We managed to catch up with Hania for a quick chat during the World Junior Championships in Kuala Lumpur. 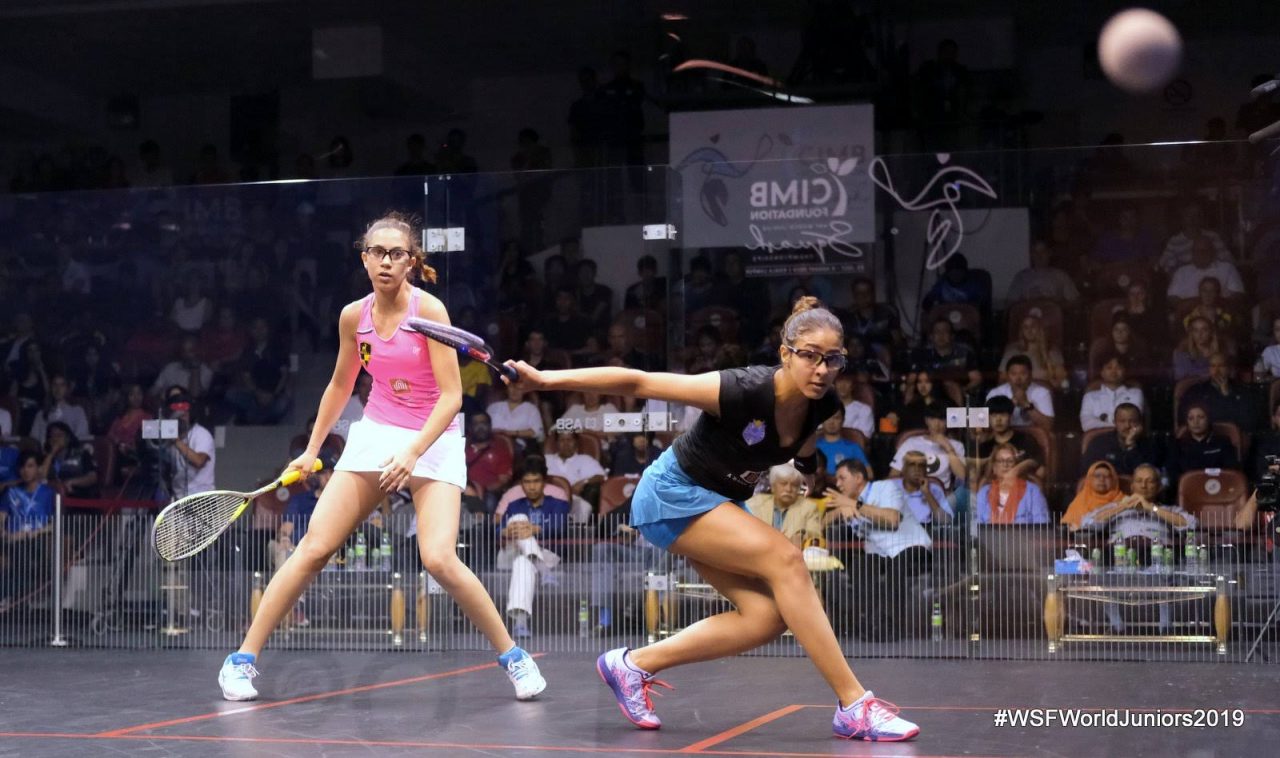 Hania played with such confidence in the World Junior final to win in straight games.

It’s taken you five World Junior events and three finals. Tell us how you feel now that you’ve finally won the title?

It feels great to finish off my junior career with the world title that I’ve always wanted to win. It took me some time to do it, but it’s never too late. Every time, I learned something from each final until I got here this time.

How important is this title to you?

I grew up watching all the top girls play, like Raneem El Weilily and Nour El Sherbini, and I’ve always wanted to be like them. So when I look at their junior career, they’ve won many junior tournaments like this one. In fact, they’ve won this more than once, so I’m glad I managed to at least win this once.

You beat your good friend Jana Shiha in the final. Can you describe how that felt?

We’ve played so many times before and the last time, it was the British Junior Open. But this time, it’s completely different because it’s the World Juniors final. I definitely didn’t want to lose and at the same time, she’s my good friend, and I wanted to have a good match against her in our last junior match. I’m just glad I managed to win today.

Hania drops to her knees after clinching the winning point after outing good friend Jana Shiha in the final of the World Junior Championships final in Kuala Lumpur.

Even though you haven’t won the world juniors, you have been doing very well on the PSA World Tour and now ranked 15th in the world. Is this something beyond your expectations?

No, not really. I’ve been working so hard and I think I’m doing the best that I can in training just so that I can be closer to the top. I also came into this event knowing I’m the world number 15, so that gave me a lot of confidence this time to stay positive.

After this, you will be playing only the senior events. What is it you think you’ll miss from junior squash?

Junior events are more fun. I will definitely miss the team events and even though the women (seniors) have team events, I don’t know if it’ll be the same. I will also not have my parents with me (as much) on the senior tour, so maybe that too.

What do you feel are the major differences between junior and senior squash?

First of all, I will not have to wear anymore eyewear! I feel like on the senior tour, the rallies are longer and they are more physical, which is something I like. I love the feeling of running and making effort to get to every ball. This is not so present in the junior game. 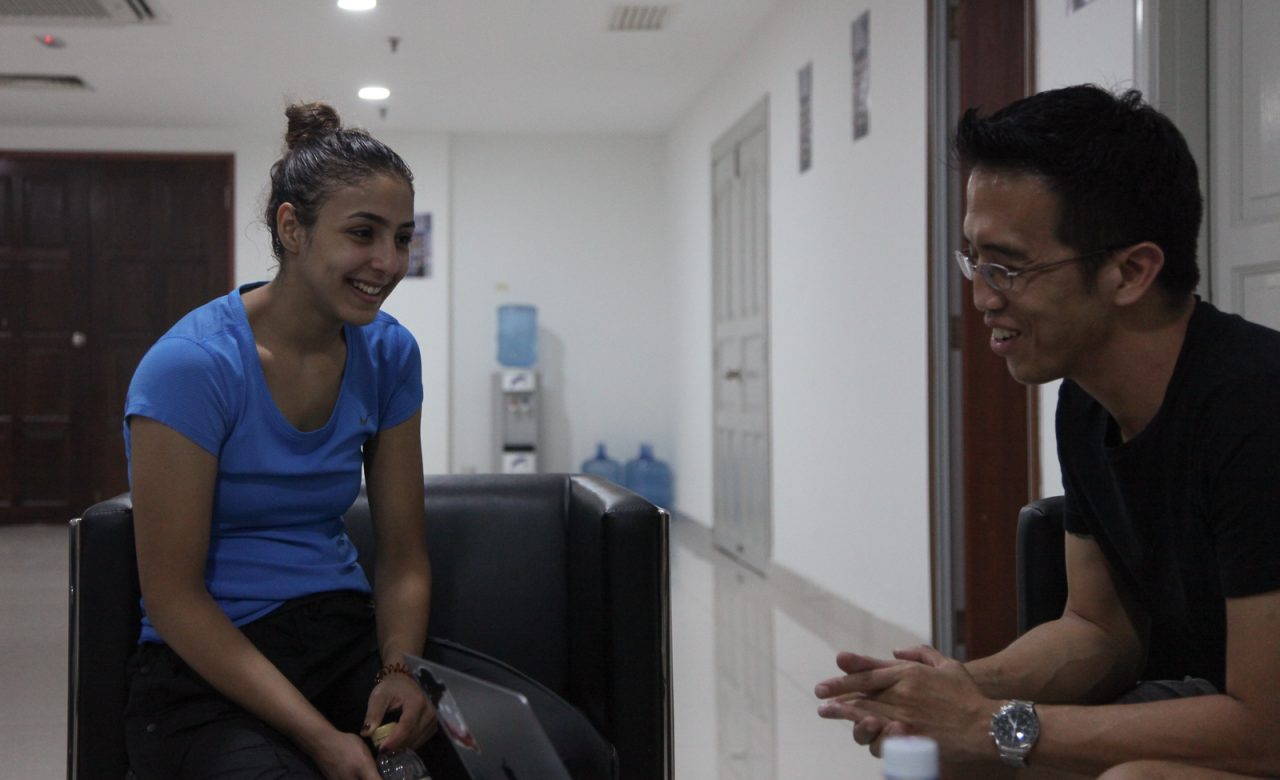 Having been to a quite a few tournaments on tour, which is your favourite venue?

I’d have to say the Pyramids in Egypt. I’ve not played on the glass court there yet, but I feel that the whole atmosphere and surroundings there are just perfect. Hopefully I’ll get on it this year.

I also think the glass court at the Grand Central Station in New York they have at the Tournament of Champions is another one of my favourites.

Being a professional squash player, I am sure there are many sacrifices you make as a teenager. Can you tell us a bit of that?

I’ve missed so many parties with my friends, that’s for sure. But I got used to it and I’m fine with it. As you’ve said, I’ve had to make sacrifices just to be where I am today, so I’m completely fine with it. I try to make up by seeing my friends over the weekends to catch up.

How was it being in school and playing on tour at the same time?

Initially, it was quite tough as the school was complaining a lot about me missing classes and exams. I had to keep asking permission to go to every tournament but as time passed, they got used to it.

Squash aside – what do you do for fun?

There are so many good Egyptian players. Who is the single one most important player you look up to?

Raneem El Weilily. She’s the nicest person on the tour, not to mention her squash is amazing. Besides squash, she is also a very talented person and an absolute fighter. She’s just so pure and she’s a very good friend. 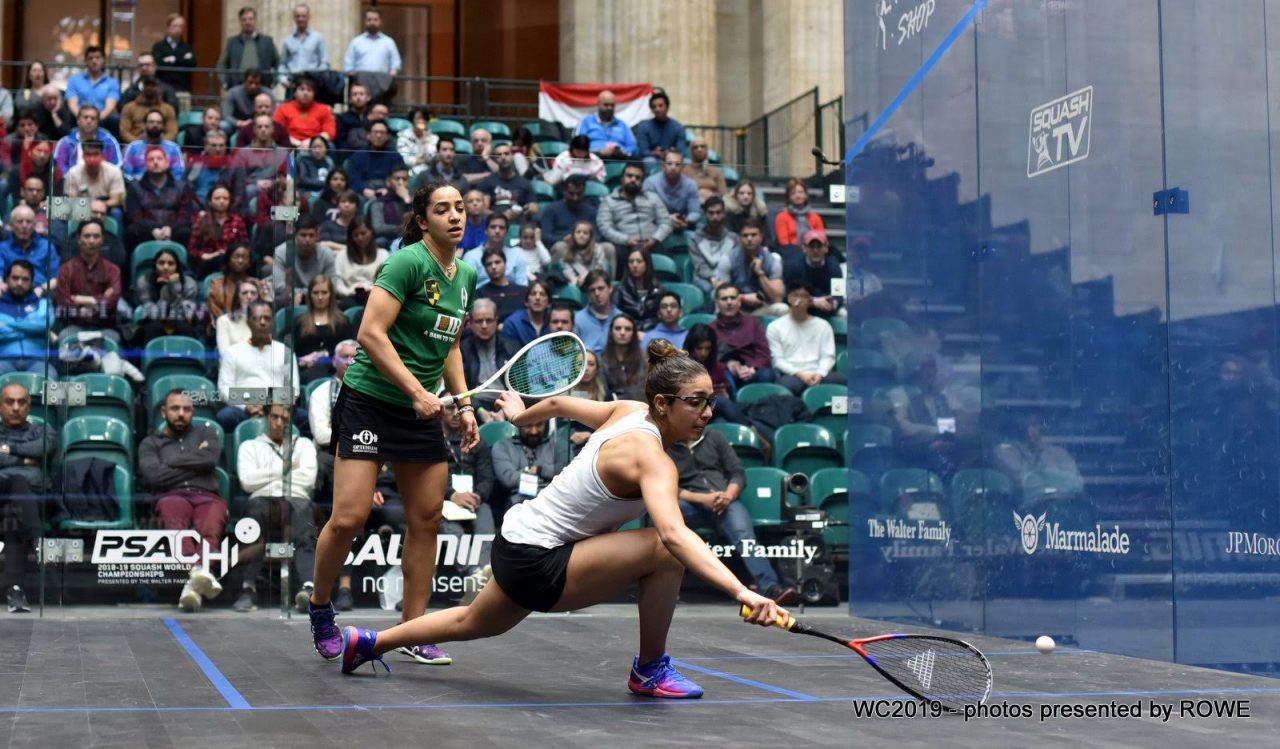 Hania in action against her idol and friend Raneem El Welily at the World Championships in Chicago.

So if you were not a squash player – what do you think you would end up doing for work or what would you be studying to become?

I really don’t know because I’ve been into squash for so long. But I’d probably go to university and study law. I like to argue a little bit!

Will you still be studying after this now that you’ve completed high school?

Apart from squash – is there another sport you play or like?

Tennis! In the off season, I play a little tennis, even though I know it’s not very advisable. I definitely like to watch the matches, especially Roger Federer.

Finally – who do you think is a better player – Mohamed El Shorbagy or Ramy Ashour?

I’m so not answering this question! I just think that hard work can beat talent.