Alex Wan August 4, 2020 No Comments on Hong Kong’s Au siblings bow out at the top of their game

Hong Kong’s most decorated pair of siblings, Annie and Leo Au, both called time on their careers after a combined 28 years on tour – elder sibling Annie joining the tour in 2004 and Leo coming into the scene four years later. The pair, 31 and 30 respectively, are the reigning Hong Kong national champions, with Annie collecting her eight and Leo collecting his sixth in the 2019 editions. They have also capped around a combined 200 times for Hong Kong and their retirement would surely be felt by the national team at team events, in the short term at least.

Their move came as a surprise to many after both siblings had a great season in 2019, winning their biggest career titles – Annie winning the $50k Macau Open and Leo winning a $28k event the QSF Open in Doha, Qatar. In addition to that, the pair also struck gold at the 2018 Asian Games, the one title to have eluded both their careers up to that time. For most Asians, winning gold at the Asian Games is considered the pinnacle of one’s squash career. It is after all, the second biggest multi-sport event in the world after the Olympic Games. 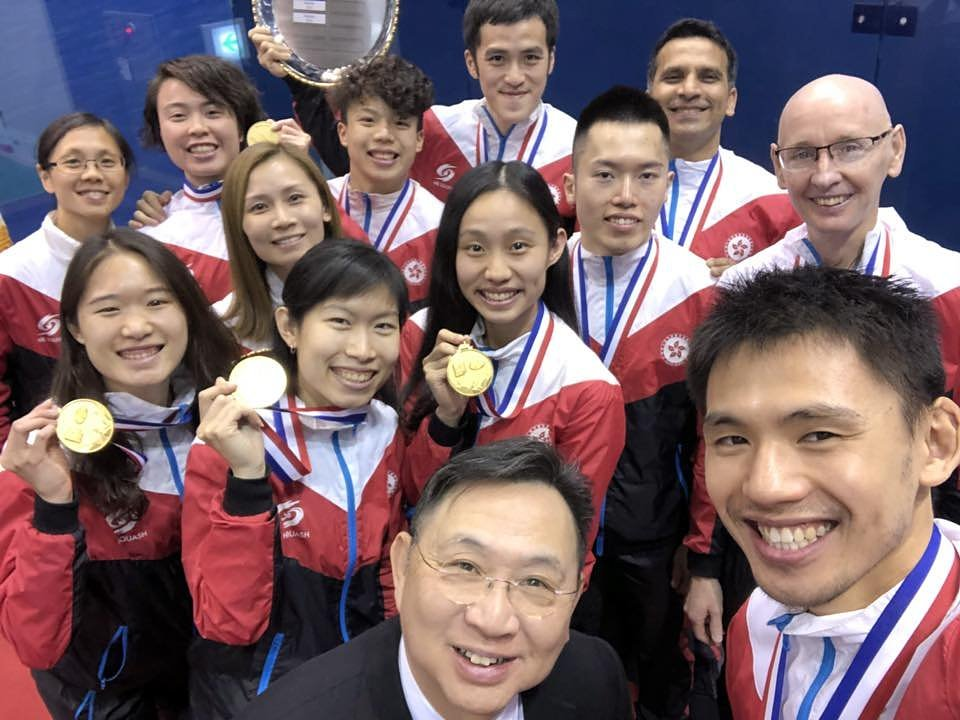 The Hong Kong national team will certainly feel the loss of the Au siblings at team events.

Annie Au, the former world number 6 and world number 11 at the time of her retirement, was the first to go as she announced her retirement on 17 March 2020, shortly after the PSA World Tour was suspended. The talented left-hander, who remains the only Hong Kong player to ever rank in the world’s top ten, has competed in 157 events. She walks away with 17 tour titles from 27 finals.

Standing at just 5’1, Annie was always at a physical disadvantage competing against bigger built opponents. However, she has mastered her own unconventional style of play that has rocked one too many top players. Her effective game of employing the lob to move her opponents to the back of the court and the deftness of her drop shots will well be remembered by anyone who has faced her in court.

Amongst her biggest wins include a five-game victory over reigning world number one Nour El Sherbini in the semi-finals of the 2018 Women’s World Team Championships in Dalian, China. Six months later, she came up with an equally impressive performance to take out Laura Massaro in straight games in the third round of the 2018/9 World Championships in Chicago, USA.

Leo, who stands at 5’5, is also mostly smaller than many of his counterparts on tour. Leo has no signature shot of any kind which people will remember him for. But anyone who had stepped into court with Leo will tell you he’s one of the toughest to play. Leo could arguably be one of the roughest early round opponents for the title contenders in the bigger events. His willingness to run his opponents down to force another shot out of the rally would be his biggest weapon on any given day.

He currently holds the record for the longest professional match with Shawn Delierre. The pair played an astonishing 170 minutes (the fifth game alone took 78 minutes!) at the semi-finals of the 2015 Holtrand Gas City Pro-Am event in Canada, erasing the previous record held by the great Jahangir Khan and Gamal Awad, who played 166 minutes at the 1986 Chichester Festival. What’s more impressive is Leo went on to play another five-setter in the final the next day and won to claim the title.

Leo has reached a career high ranking of 20 in June 2018 and was just a rung below when he announced his retirement. He walks away from the tour with 11 tour titles from 20 finals. However, his most memorable title remain the Asian Games individual gold in 2018, where he saw off long-time local rival Max Lee in the final.

We managed to catch up with Leo recently for a short interview to find out what were his reasons for retirement and his plans after this.

You’re just 30 years old and world number 21. By today’s standards, that is still young and you are at the top of your game. Why did you decide to retire now?

I have spent nearly 20 years of my life in squash and that is a very long time. While I have really enjoyed the time playing on the tour, at the same time, I also think it’s time for me to explore more to see what lies ahead of me apart from squash.

2017/18 was one of your best seasons. Winning the Asian Games gold and into the top 20 for the first time. Did all these not make you want to play even longer?

Those are indeed great achievements which motivate me. In fact, most athletes would be inspired to set their next bigger goals. But for me personally, like I said earlier, I also want to see what the world has to offer out of squash. So, making the decision to retire now is really not a bad idea at all. 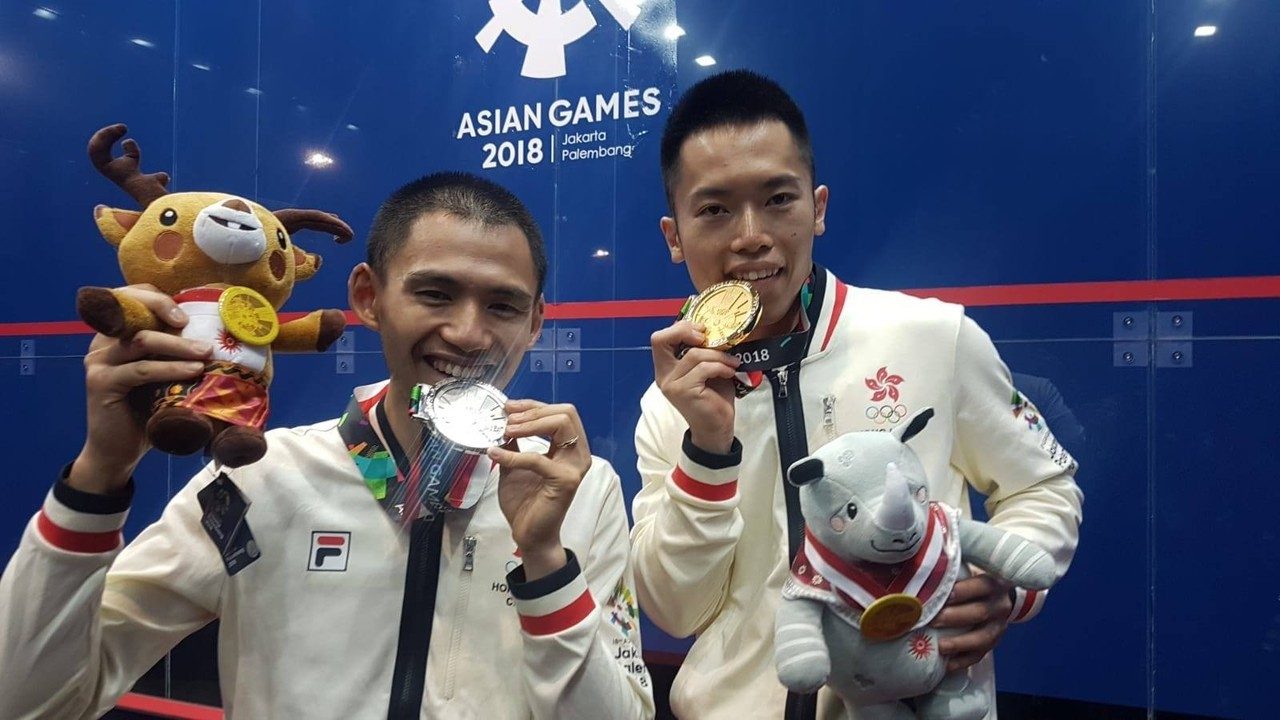 Leo (r) after beating compatriot Max Lee in the 2018 Asian Games final, in what was the sweetest victory of his career.

You’ve beaten some of the best players in the world over the years. Which particular match was most meaningful to you and why?

No win against any player in the world could match the feeling of winning the Asian Games (individual) Gold medal in 2018. It is always an honour to represent my country at any stage. But to win at such a major multi-sport event and given that it was totally unexpected, that makes it extra special for me.

Waking up and not having to think about training, it must be quite a weird feeling we think. Can you tell us how you felt the first few days?

It was very nice at first. It felt like a holiday from the tour. But as the holiday got longer, I did feel as if something was missing, like I forgot to do something every day. But I am slowly getting used to that now.

I am sure there are many good things about being a professional squash player Tell us one thing you will miss from being on tour?

Travelling is one of the best things about competing on tour. I definitely love that part and being able to see so many countries and places, learning about the cultures and people. We are also lucky to be able to put courts in amazing places such as the Pyramids in Egypt and the Grand Central Station in New York, enhancing the playing experience even more.

Finally, can you share with us what you have in plan for your future after this?

I’m in the middle of my Masters Degree in Sports Coaching and Management at the Education University of Hong Kong, so at the moment, I will be concentrating to complete this. I will also be doing some coaching on the side and only decide on my next move after I finish my studies.

SquashMad wishes both Annie and Leo all the very best in their future undertakings.