Elshorbagy slams refs: This match was too big for them

Lee Horton December 6, 2013 6 Comments on Elshorbagy slams refs: This match was too big for them 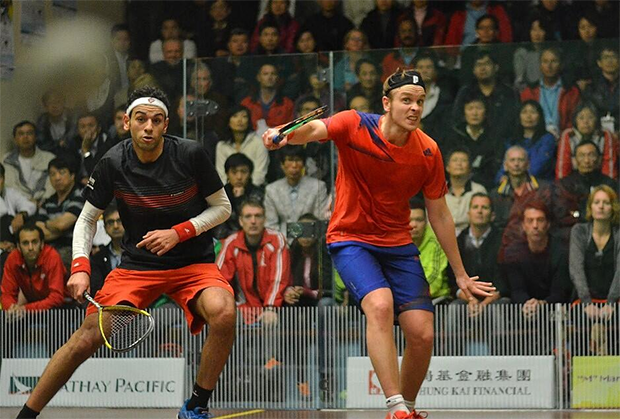 JAMES WILLSTROP came back from the brink of defeat to produce one of the greatest wins of his career, beating Egyptian star Mohamed Elshorbagy 20-18 in the fifth after a two-hour epic in Hong Kong today.

The Englishman needed eight match balls before finally booking his place in the last four after Elshorbagy drained every gram of energy, emotion and desire from the world number five.

It was high octane stuff with lets and strokes a natural consequence of total effort,  passion and scintillating squash.

Numerous decisions were questioned by the players and afterwards world number four Elshorbagy blasted the officials’ handling of the match in an outburst that could put him in hot water with the PSA who have banned players commenting on refs.

“This match was just too big for them…we both got a lot of bad calls…and I mean a lot, ” he told a note taker for the official Hong Kong Open website.

“You know we players train so hard and travel to these tournaments which is so far away and struggle with jet lag and injuries and all…the least we expect is good referees.I have never ever spoken about bad refereeing before in my life but the match was just too big for them.“

The packed crowd at the Hong Kong centre were enthralled as the two players traded punches like middleweight boxers.

Elshorbagy went two up, Willstrop came powering back and then everyone was treated to a fifth game that will be recorded as the match of the season in itself.

It was squash on a knife edge and even the bravest of gamblers wouldn’t have wagered a Euro on which way it would go. Willstrop had seven match balls and Elshorbagy two before the deadlock was finally broken…on a stroke ball of all decisions.

“That was simply stunning, unbelievable squash,” cried PSA SquashTV commentator Lee Drew at the end. And he was not wrong. 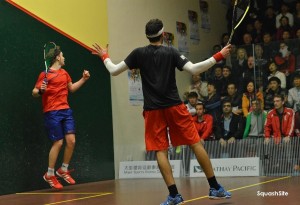 Afterwards, Willstrop was not entirely satisfied. “I know I was hitting loose shots, and created my own interference, but I feel that I deserved a couple of lets at the end… I can’t be right on every shot, but I can’t be wrong every time. Just a couple of lets,” he said.

“I don’t like playing that kind of squash, it could have been a classic, but it was ruined by that ending. There is a feeling of unhappiness after this match, that I normally don’t have after wining such a match. We both worked very hard, in the opposite of pure squash, we both had to grind.”

Elshorbagy added: “Of course I am very disappointed but I gave it everything I had. We both gave it everything we had and I am just very proud that I stood there strongly till the last point and never gave up whenever I was match ball down.”

Marwan Elshorbagy, who had lost to his brother in the previous round, was among the spectators.

He said: “This is one of the best matches I have ever seen. Both players should be proud of themselves. They played great squash and they entertained the crowd for more than two hours. Both of them were cramping during the match and they kept pushing and pushing.

“When you watch amazing matches like this, it makes me sad not seeing the sport in the Olympics. I’m not too sure what the IOC is thinking, especially after a contest like this.”

Willstrop will now face Spain’s Borja Golan for a place in the final, after Ramy Ashour retired midway through their quarter-final encounter.

The defending champion was cruising against Golan after taking the opening game 11-5 but was then forced to take an injury timeout after aggravating his hamstring injury at 6-2 up in the second.

Despite going on to win the second game, it was clear the Egyptian was struggling but he continued to battle on as he lost the third 11-1. The 26-year-old eventually retired midway through the fourth game but left many questioning why the decision had not been taken sooner.

In the bottom half of the draw, Gregory Gaultier was pushed to the limit by world number eight Tarek Momen as the Hong Kong Squash Centre witnessed another five-game battle.

Matthew lost a tight first game 11-9 but quickly found his range in the second to ruthlessly punish the occasional errant shot from the experienced Egyptian.

The second and third games followed a similar pattern and not even the trademark brilliance of Shabana at the front of the court could halt Matthew’s momentum as the world number three advanced 9-11, 11-4, 11-8, 11-8.

Amazing drama and skills under the most extreme of pressure on show in that last match.