Jemyca Aribado created history once again when she became the first Filipino player to win a PSA title after wining the NZ International Classic in Palmerston North, New Zealand earlier this month. She beat local Emma Millar 11-9, 6-11, 11-7, 12-10 in the final, after the pair had earlier took out Australia’s top two seeds of the tournament, Sarah Cardwell and Jessica Turnbull.

Having first created history as Philippines’ first professional player in 2016, Jemyca played her first event at the China Challenge Cup in September 2016, losing tamely to Sarah Cardwell, who she upstaged in the semis here. Then ranked at 225, she nearly halved her ranking to 124 in December, after an impressive showing in her first five events, which included a semi-final showing at the Queensland Open.

New Zealand has to be one of her favourite places, as her good run continued on in 2017, achieving her best results there at the Matamata Open and North Shore Open by upsetting the seedings to reach the last four in both events.

SquashMad first discovered Jemyca at the 2015 South East Asian Games, where she shocked the competition and made it to the last four. There, we spoke to her on her dreams and aspirations, and it is encouraging to see her stamping her mark on the tour.

We spoke to her briefly after her win and asked her what this win means to her.

“I am truly delighted to win my first ever PSA title. In doing this, I have already met one of my goals for 2018 and couldn’t be any happier. I still can’t believe it and it’s definitely something that I will remember for the rest of my life. Making history for Philippines Squash is something that I have been dreaming of since I became a professional,” said the petite 24-year old.

Despite squash not being a major sport in the Philippines, Jemyca has always found it special to be wearing her national flag over her attire.

“It has always been an honour for me to represent my country in international squash. It’s extra special because there are only so few of us on the squash tour. I kept the faith, believe and confidence that this moment will happen in God’s perfect time. I never stopped dreaming that a Filipino will, and a Filipino can. The Filipino Squash Community is very proud of what I have achieved.

I am sure that this milestone will also serve as an eye opener for Philippine Sports Commission to consider squash as one of the sports where we can highly excel in, and that it should be given equal importance and attention like what they have been doing in other sports like basketball, boxing and taekwondo.”

Like any athlete, there is always a strong support team behind them and it is no exception in Jemyca’s case. We gave her an opportunity to thank some people and she had a pretty long list :

“Huge thanks to coach Manu Yam and Aunt Chiqui, who hosted me during my stays n New Zealand. They have given me everything I needed there. All the players that I have trained with during my , especially my Belmont Park family and my fellow Filipinos who made me feel at home.
My team back home, our NSA president, Mr. Robert Bachmann for always believing in me, my best friend, Aysah, for always cheering me on. Jennifer Bacatio, Louis Bronsveld and Martin Slabber for believing in me and always being there without expecting anything except for me to be believe in myself, to do better each day, to strive harder and succeed in my squash career and life in general.

So, that’s quite a list, and I want to share my success with all these people who have been there all this while.”

Apart from Jemyca, another person who had found success in New Zealand is Malaysia’s Ivan Yuen, who ended his three year title draught in style by winning back to back titles at the NZ International Classic and NZ Southern Open. 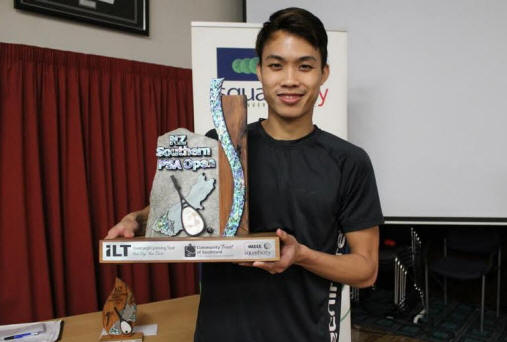 Ivan Yuen all smiles with his NZ Southern Open trophy

Playing in his first final since February 2017, the 27 year old upset top seeded Harinder Pal Sandhu of India 11-8, 11-7, 2-11, 11-7 at the NZ International Classic final, before seeing off Australia’s Rex Hendick’s challenge in the final of the NZ Southern Open with a similar match score.

“It definitely feels good to be back winning matches and tournaments after what I have gone through in the last few years. Knowing that all the effort I’ve put in continuously and not giving up has not gone to waste makes this even sweeter,” Ivan said.

The achievements of the pair were recognised by the PSA, who announced both as their Players Of The Month.