NICOL DAVID ended unseeded French star Camille Serme’s giant-killing run in the final of the Carol Weymuller Open in New York to win the WSA Gold 50 event, celebrating its 40th anniversary at The Heights Casino in Brooklyn, for the second time since 2005.

The match notched up world number one David’s ninth successive Tour win over the world No10 from Creteil – but Serme had enjoyed a sensational run in only her third appearance in the event, upsetting higher-ranked English opponents Alison Waters, Jenny Duncalf and defending champion Laura Massaro in quick succession.

“The match started off evenly and both players were working the court well and there were some long hard fought rallies,” explained Heights Casino Director of Squash Linda Elriani. “Nicol looked as though she was prepared to just absorb Camille’s pressure and not go for too many shots. “Camille (pictured above, left, with David) was trying to apply the pressure that she had done yesterday and throughout the week but was making some tentative errors with her short game. Nicol managed to edge ahead to 9-7 after a crazy long rally that ended in backhand drop in the tin from Camille.

“Another tin from Camille took Nicol to game ball at 10-8. Camille gave a big push and managed to pull back and with a backhand boast in the tin from Nicol and a lovely backhand drop winner from Camille this took her to 10-10. Nicol stepped on the gas and a very deep penetrating drive forced an error from Camille and then an unforced backhand volley drop gave Nicol the first game 12-10.”

David dominated the second, dropping just two points to establish a 2-0 lead – and stayed focussed in the third, fittingly winning the championship point on a perfect crosscourt drop shot straight into the nick! “I’m just so happy to win this tournament after so long,” said David (pictured above with the trophy) after the 12-10, 11-2, 11-5 triumph which saw the 30-year-old from Penang go through the championship without dropping a game.

“It has been such a great atmosphere that it just drives me forward to play better squash each day. Camille played really well in that first game and it was neck and neck all the way!

“In the second and third I mixed it up a bit more because she gets into a great rhythm and it can be dangerous!

“I’m very pleased and I’m looking forward to next week. I’d like to thank Linda for such a great event and all the families that have supported this tournament for all these years.”

Serme (pictured below with David) rued the errors in her final match: “I’m a bit disappointed to be honest,” said the 24-year-old France and European champion. “Even though she’s the world number one I wanted to do better than getting one game as that’s the best I have done against her! “I felt she played really well and I made too many mistakes. I don’t even know why as I wasn’t even trying to go fine on my shots. Right after the match I feel disappointed but later I will look back at what a great tournament I’ve had.

“The good thing is I only have to wait one week to hopefully play her again at the US Open. Thanks so much to everyone here for everything! Thanks too for all the support here and back home and all the people that watched me on the live streaming.”

Nicol David‘s success marks her the third WSA title of the year – and the 68th of her career.

In the semi final, Serme dethroned  Massaro after earlier upsets against Londoner Alison Waters, the world No4, and Yorkshire’s Jenny Duncalf, the world No6. The French underdog (pictured above with Massaro) established a 9-4 lead.  Laura then dug deep and pushed up the court and stayed 100% focused to claw her way back to 10-9 game ball in one hand.

Camille started to look flustered for the first time and it was looking as though Laura had finally found her groove. A forehand boast mistake from Laura gave Camille another chance and Camille took it by the horns and came through to win the first 12-10.

From six-all in the second, Serme rattled off five points in a row to increase her lead to 2-0.

The third game followed a very similar pattern with Camille looking as confident as ever and not seeming to be fazed by the fact she could also take out the world No.2 as well as the world’s four and six. Camille was looking so comfortable on the court and Laura was looking increasingly the opposite.

“It wasn’t for lack of trying on Laura’s part it was just so difficult to impose her game on a player that was obviously feeling so good in every way. Camille came through the third and final game 11-4,”  explained Heights Casino Director of Squash Linda Elriani.

A delighted Serme said after her huge win: “I feel so well physically. I wonder how it is possible! I just want to say a big thank you to my physical coach as he gave me a hard program to follow this summer.

“Squash is so much mental and if I feel well in my life then I play relaxed and focus on what I want to do on the court. I just wish my boyfriend and parents were here to share it and see how well I can play. For now back on the bike and stretch!”

Now in the 13th Tour final of her career, but her first of the year, Serme faces the ultimate challenge – world number one Nicol David.

After a shock quarter-final exit last year, the Malaysian star is back at her best – and reached her fifth WSA Tour final of the year, and the 87th of her career, when she beat Egypt’s No3 seedRaneem El Weleily 11-8, 11-7, 11-4.

“To beat Raneem 3/0 is a huge deal,” admitted 2005 champion David (pictured above with El Weleily) afterwards. “It came together at the right time and I want to bring that through to the finals tomorrow.”

A disappointed El Weleily said: “She played really well. I wasn’t as sharp as I needed to be. I should have done better but it’s been a great tournament and I’ve enjoyed my time here. Thank you everyone for everything,” added the world No3 from Cairo.

Duncalf, the 2009 and 2010 champion, went into the match 7-2 up in the pair’s head-to-head record – but Serme was in confident mood having beaten Duncalf’s fourth-seeded compatriot Alison Waters the night before,.

Serme was thrilled with her 11-7, 11-7, 11-7 victory. “I’m SO happy! To be honest when I was warming up I didn’t feel the best because of yesterday’s match but when I was on court in the match I was running and covering the court like I normally do,” said the 24-year-old from Creteil.

“I guess Jenny didn’t play her best. After the second I realised the second game was so important. I’ve reached the semi’s here and I’m so happy! I’m going to try and enjoy it now but tomorrow I’ll re-focus. For now back on the bike and stretch!”

A disappointed Duncalf commented: “She obviously played well. She hit her targets really well. I wasn’t good enough. Poor performance, but she was on fire.” 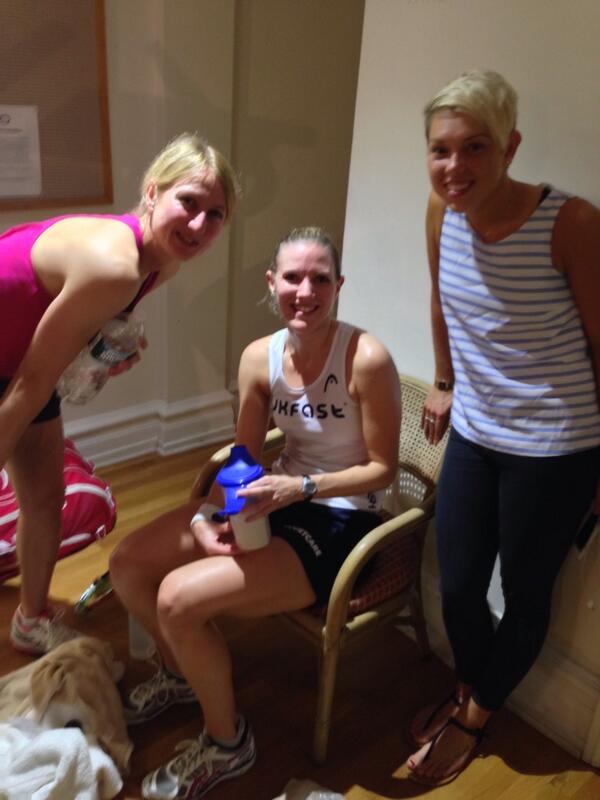 “That was a really hard 3-0 ” said Massaro later. “You know you’ve played well to beat Low 3/0! I was really happy with performance and the way I played. Feeling good to be in the semi’s without dropping a game and really looking forward to tomorrow.”

Low, the world No7 from Penang, said: “I felt I was actually playing well and I didn’t do anything wrong in particular. We both played tight squash. It’s always disappointing to lose but I felt there was not much I could do more.

“We’re both top 10 players and she’s not world No2 for nothing and she has more experience than me!”

The other semi-final will feature last year’s runner-up Raneem El Weleily, the No3 seed from Egypt, and top seed Nicol David, the world number one from Malaysia who won the title in 2005.

“My aim was to keep her moving because she is so good when she has time,” said David afterwards. “I managed to put my game plan together and my shots came in at the right time.

“I’m looking forward to another step up tomorrow. It’s already a bonus on last year so now I’m just going to enjoy it!”

Pallikal, who upset Australia’s No8 seed Kasey Brown to make the quarters, said: “I’m tired after my long match yesterday! When you play Nicol you have to be fresh to have a chance.

“I started well in the first game and she just got tighter in the second and third which made me go for more shots and she just got onto the balls. I’ve had a good tournament and I’ve got a lot to learn.

“It’s all a learning process for me. I really made use of this tournament and hopefully I’ll come back in a week or so in Macau and play well. You’ve got to take the positives and learn from it.”

“I think I played OK and I’m happy to be through to the semi-finals,” said the 24-year-old world No3 from Alexandria. “Joelle is such a good player and she has had such great results since we played last year.”

King added: “Lots of mistakes! Just really hot and struggling to control the ball. All credit to her as she can make you feel rushed. In parts I got a couple of good runs of points but I just couldn’t take it up to the next level and capitalise.” 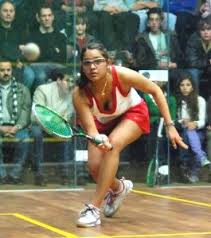 Indian squash star Dipika Pallikal (above) produced one of the best games of her life in the opening round of the Carol Weymuller Open in New York on Thursday when she recovered from two games down – and saved a match-ball in the third – to upset Australia’s No8 seed Kasey Brown and reach the quarter-finals of the Women’s Squash Association Gold 50 event celebrating its 40th anniversary at The Heights Casino in Brooklyn.

“It was the longest and most exciting match of the evening and the only five setter,” said Heights Casino Director of Squash Linda Elriani. “Kasey and Dipika were 4-1 in their head to heads in Kasey’s favour.”

Brown, the US-based world No11, started strongly and managed to contain underdog Pallikal’s shot selection – winning the first two games. In the third, Brown led 9-7 before reaching match-ball at 10-9 – but was un