Men’s seeds safely through in Macau

Alex Wan September 13, 2016 No Comments on Men’s seeds safely through in Macau

The 2016 Macau Open kicked off today with 8 men’s and 3 women’s qualifying matches at the three-court squash facility at the Macau Bowling Centre.

Joshua Masters, fresh from the World University Squash Championships in Kuala Lumpur last week, faced Hong Kong number 6 Henry Leung. The 21 year old from Maidstone had a comfortable first game, in which he dominated the T with all of his 6’1 height and ending many rallies with low kills.

However, he found himself truly challenged in the second game and was behind in the first half of the game. However, he recovered from 4-6 down to squeeze through 11-9 after a rather physical last few points. He was in control again in the third game, racing to a 10-5 and eventually winning 11-8.

“I eased off a little after the first game and lost a bit of the lengths. I’ve seen some of his drops so I knew it wasn’t going to be easy. I have to thank Marwan (Elshorbagy) for his coaching in between my games,” said the Englishman. 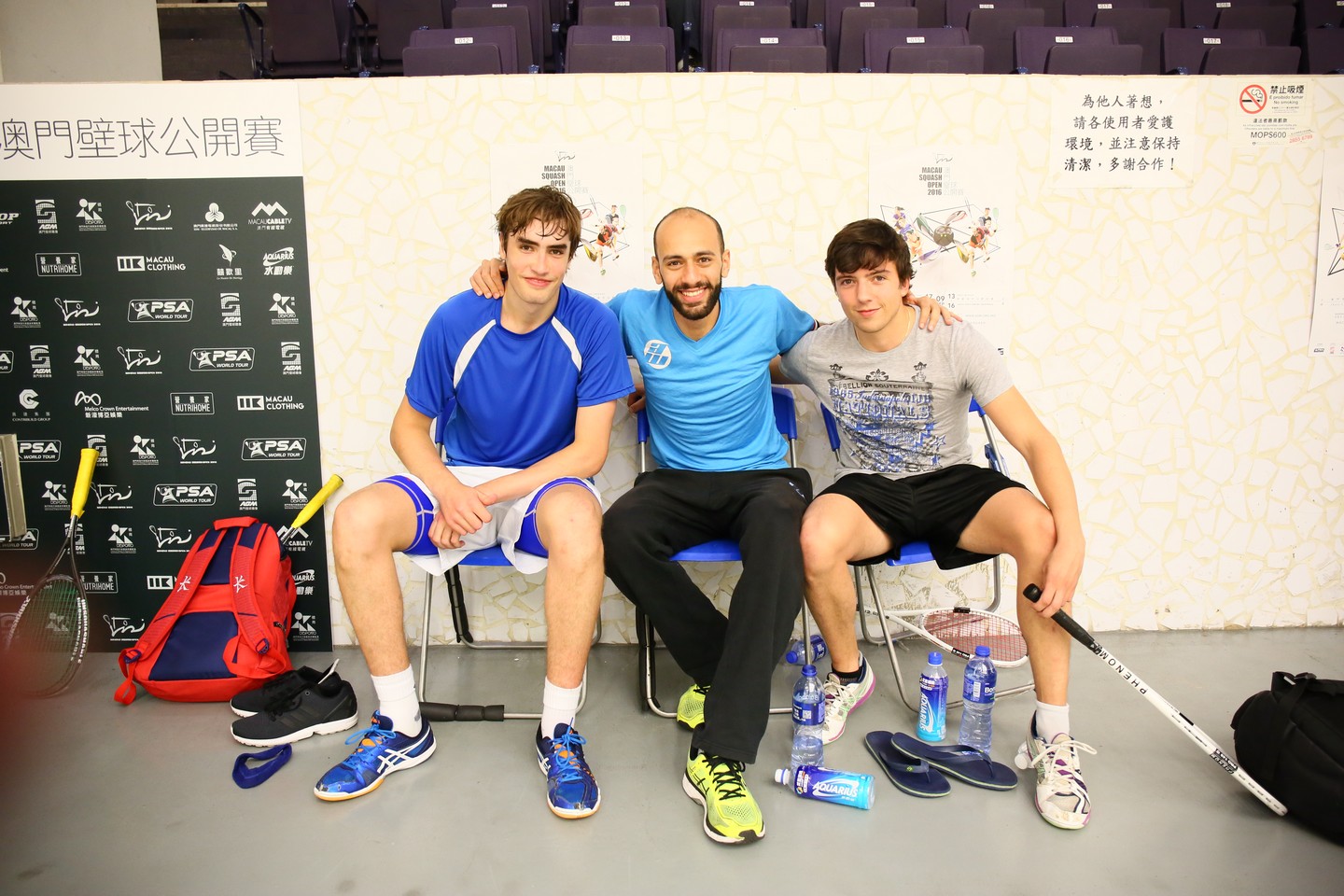 Ko Youngjo made easy work of Ireland’s Stu Hamm, who started the more aggressive one, striking the ball with all his might. The pace seem to have favoured Ko, who was moving gracefully in comparison. Right from the first game, Ko’s tighter drives and more effective shot selections was way above his Irish opponent.

23 minutes was all it took Ko to book his place in the next round against Joshua Masters, and thus preventing an all-Bristol clash.

Malaysia’s Elvinn Keo, the qualifying seventh seed from Penang, made it to the qualifying finals at the expense of India’s Ravi Dixit. Keo was in cruise control in the first two games with his deft touches, especially to the front left corner, dropping just 6 points in total.

The third was more competitive but Keo was always in control in the first half of it. But things took a turn from 4-6 onwards as Dixit inched his way to 11-9 to force a fourth game, which was close and Keo was forced to save two game balls, before winning 13-11. It must have been a relief for the Malaysian, who later said he felt his heart racing midway through the second game. 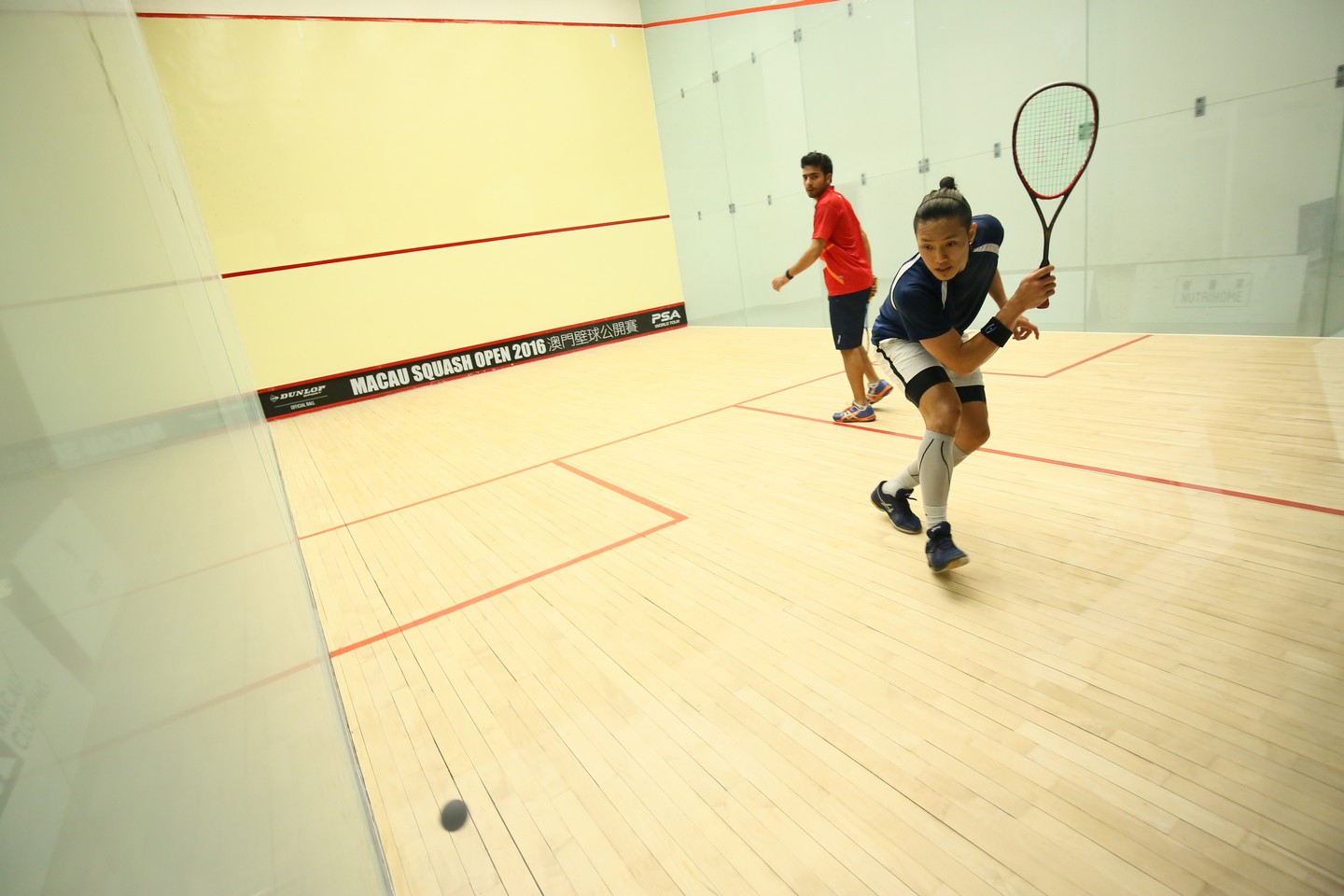 Local interest for the locals in the men’s event kicked off with 15 year old Leung Teng Chi, who took to court against Aussie world number 90 Joshua Larkin. The 26 year old from Sydney was dominant right from the start, exerting a high paced tempo which his young opponent never settled into. 14 minutes was all it took for Larkin to book his place tomorrow for a shot into the main draw against Elvinn Keo.

Match of the day has to belong to Harinder Pal Singh Sandhu of India and Hong Kong’s Tang Ming Hong. While their world ranking would suggest a gap in playing standards – 79 for the Indian and 156 for Hongkie, but the match was anything but.

The Indian had started off effectively, hitting the ball with a lot more purpose than his opponent, leading from 4-3 and then opening up a 4-point gap to 8-4 before closing it 11-5 thanks a tin from Tang.

However, Tang soon got his A-game and found himself taking the lead 8-4 in the second, before Singh Sandhu hit a few winners to draw level 8-8. An exciting rally ensued where both men took turns on the attack and defence that ended in favour to Tang. A no let followed by a backhand flick that sent Singh Sandhu the wrong way drew things level, and Tang did not hide his delight with a huge “Yes” on his way out of the door. 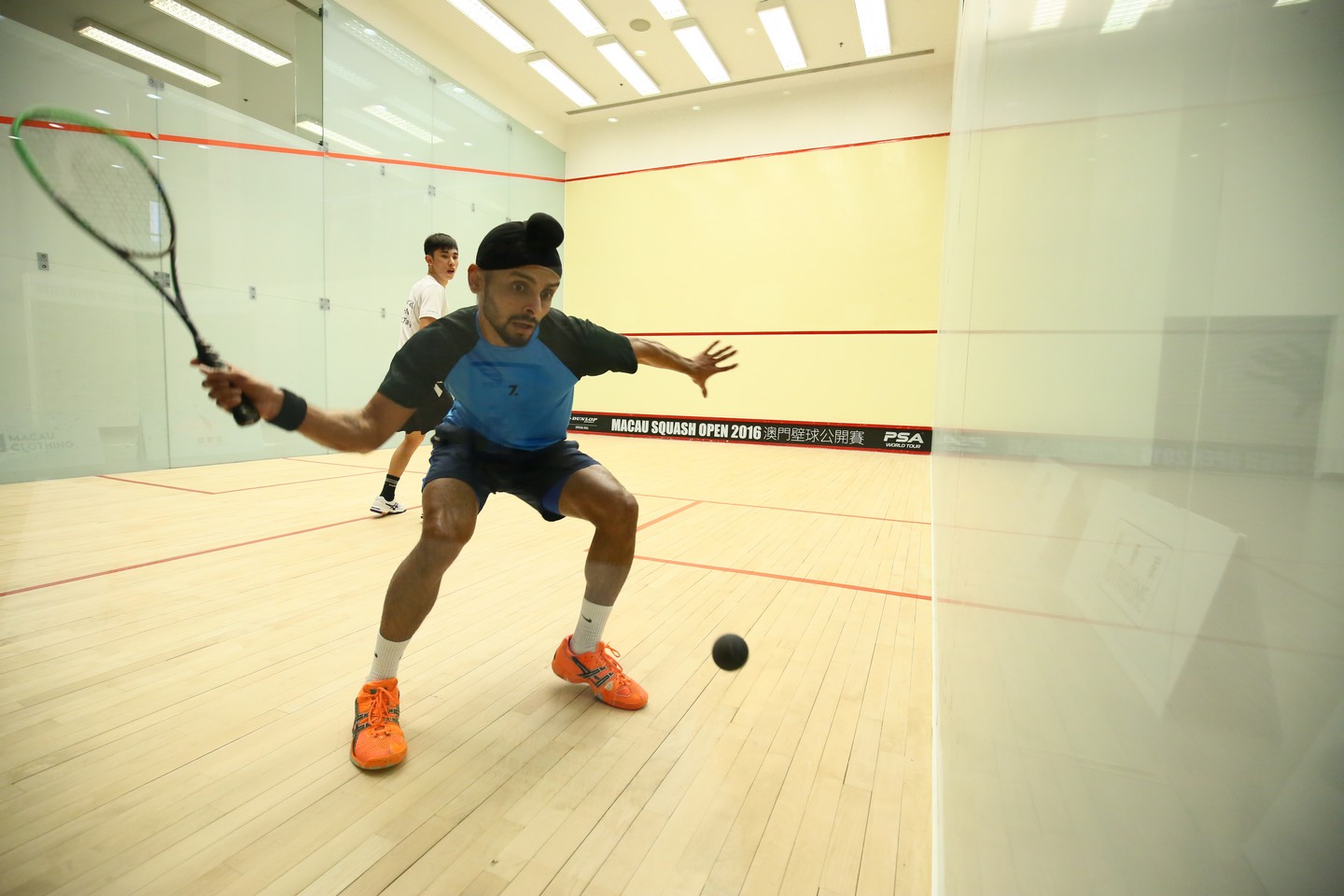 The third and the fourth was just breath taking athleticism from both the players; Tang probably a little more. Both games went the distance and twice, it was the Indian who scrapped through marginally, earning himself at least another day of play.

The manner in which Tang chases down every ball in the final rally was as quick and fresh as it was in the very first point. Singh Sandhu might have been in more control most of the time, but the retrieval ability of Tang was a joy to watch. It must also be mentioned that Singh Sandhu’s perseverance in not rushing to end the rallies probably won him the big points.

“I started off well, hitting good lengths and varying the pace. In the second half, I relaxed a little and that’s when things got more difficult. There were more loose shots and he was able to take advantage.
I used my experience to stay in the rallies a little longer (after the second game), be more patient and in the end it paid off for me,” said Macau Open debutant Harinder Pal Singh Sandhu later.

Taiwan’s James Huang also made it to the next round when he recovered from a one game deficit to beat Jordan’s Ahmad Al-Saraj. The lanky Jordanian started off well, catching Huang so often with his crafty style of play and taking the first game.

The next two games, Huang was a little more familiar with what was coming or what could possibly come. His experience on the tour showed as he was more patient in the rallies, working out the younger Al-Saraj. He won both the games deservingly and in the fourth, Al-Saraj was simply out of breath and lost tamely 3-11. 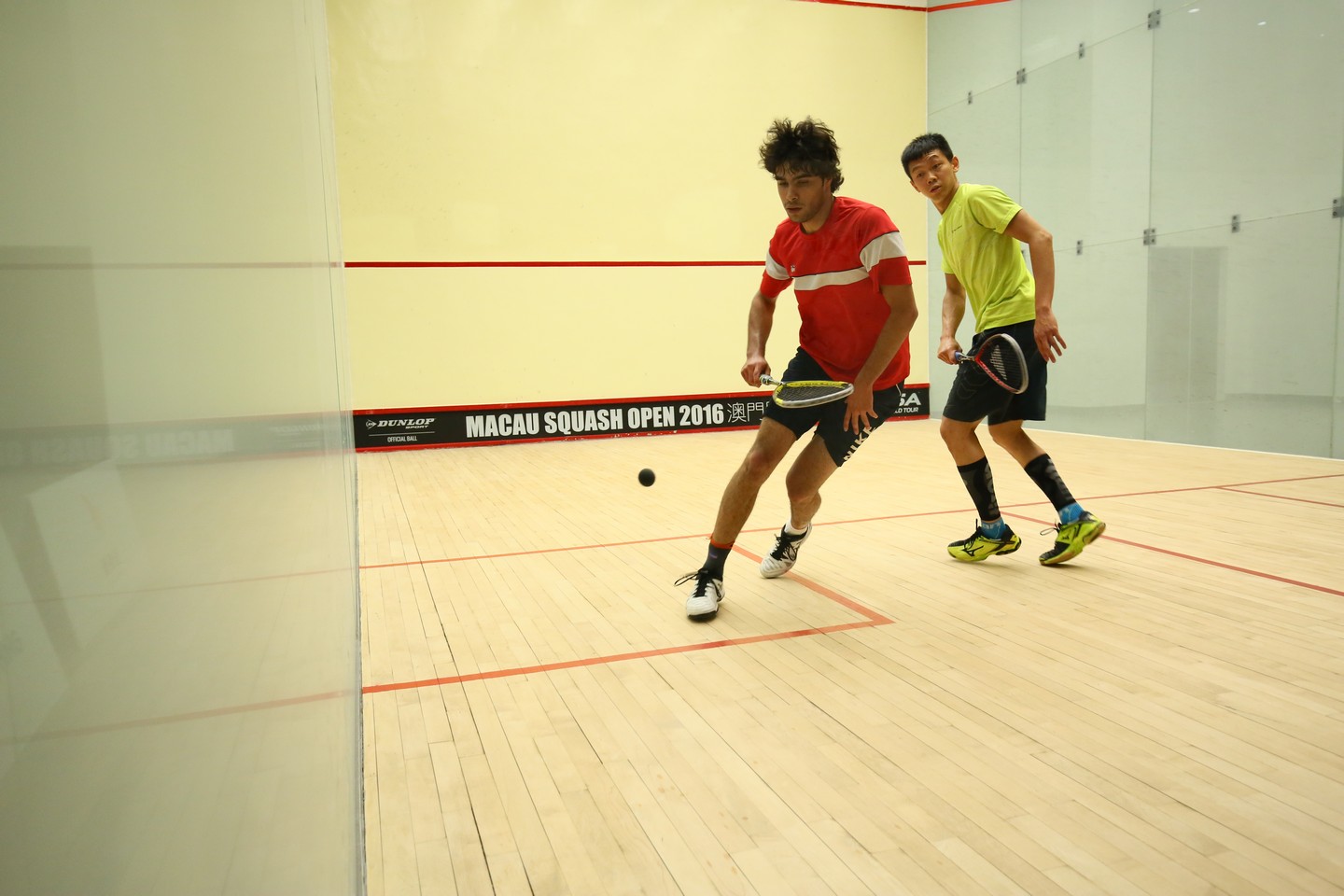 The last two matches of the evening featured 15-year old locals Manuel Chan Gassmann who faced Hong Kong’s Wong Chi Him and Van Keng Hei who had Welsh Joel Malkin for company. Both matches lasted identical 16 minutes and were one sided. Wong won in 1, 4 and 1, while Malkin was more ruthless, dropping just a single point in the opening game throughout the entire match.

A day of teenagers in the women’s

A trio of 15 year olds featured in the women’s qualifying today, of which two came out triumphant over their more illustrious opponents.

Hong Kong’s Bubble Lui was first on court and ousted seventh seed Yura Choi of Korea. While it may be an upset on paper, the result did not come as a complete surprise to many. The Hong Kong 15 year old started with a bang, opening up a big lead right from the start and wrapped up 11-3 before Choi could settle.

The more experienced Korean then tightened up her game and the following two games were both equally tight, which ended split between the pair. The two games took its toll on the Korean as she was a spent force in the fourth game, going from 1-5 down and eventually losing 5-11. 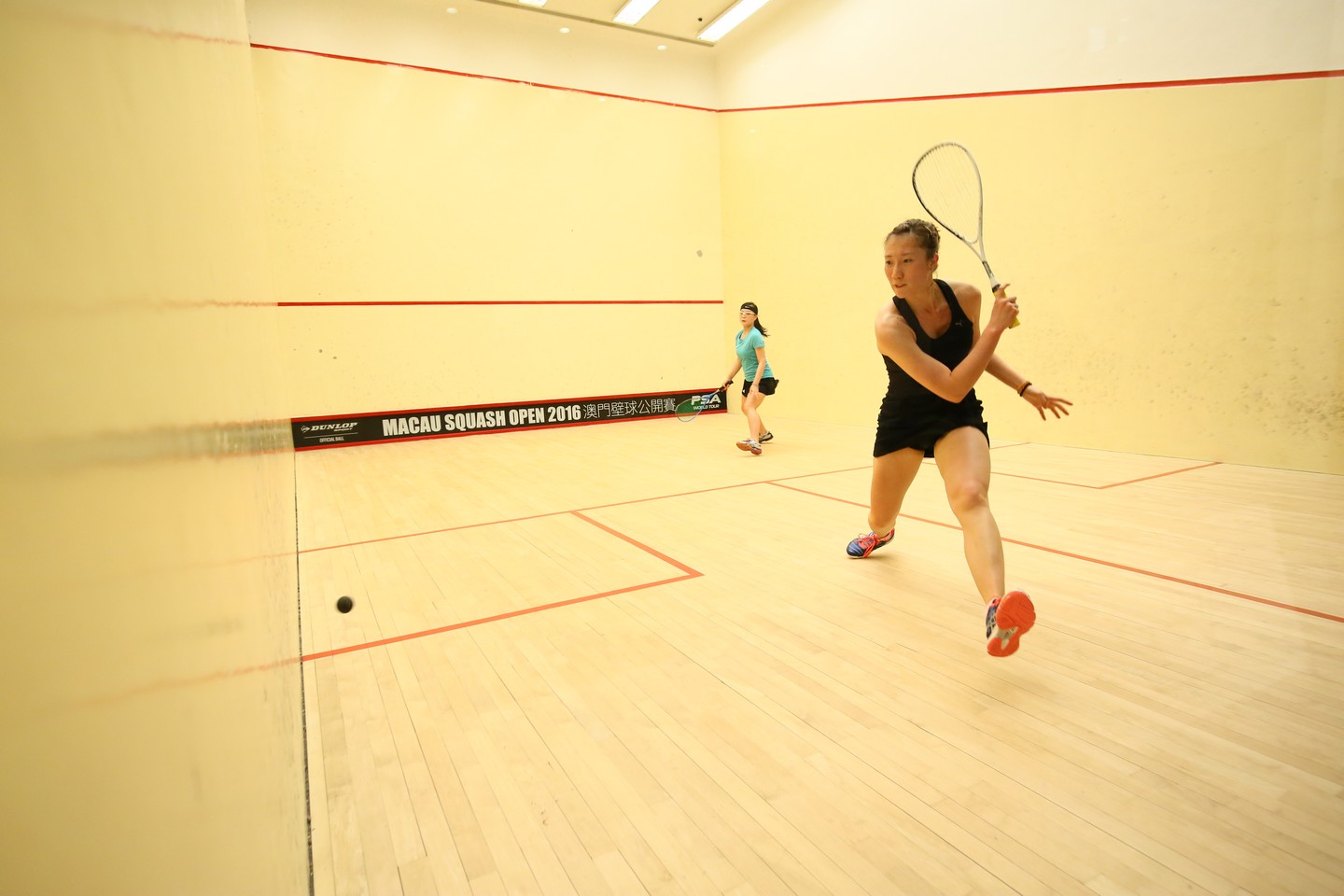 Chan Siu Yuk, a relatively unknown 15 year old from Hong Kong next took out Egyptian Farah Momen, the 8th seed in qualifying. It was a match that saw both players having streaks of brilliances followed by a string of errors.

Momen, who hits the ball with brute force most of the time, troubling the petite 15 year old with the ferocious pace in the beginning. But Chan would settle into the game and Momen would find the tin consecutively, before squeezing through.

The trend continues in the next 3 games, with the only difference being Chan would walk out the winner in all three to book her place in the next round. She will face her senior compatriot Carmen Lee tomorrow, thus ensuring another place in the main draw for Hong Kong. 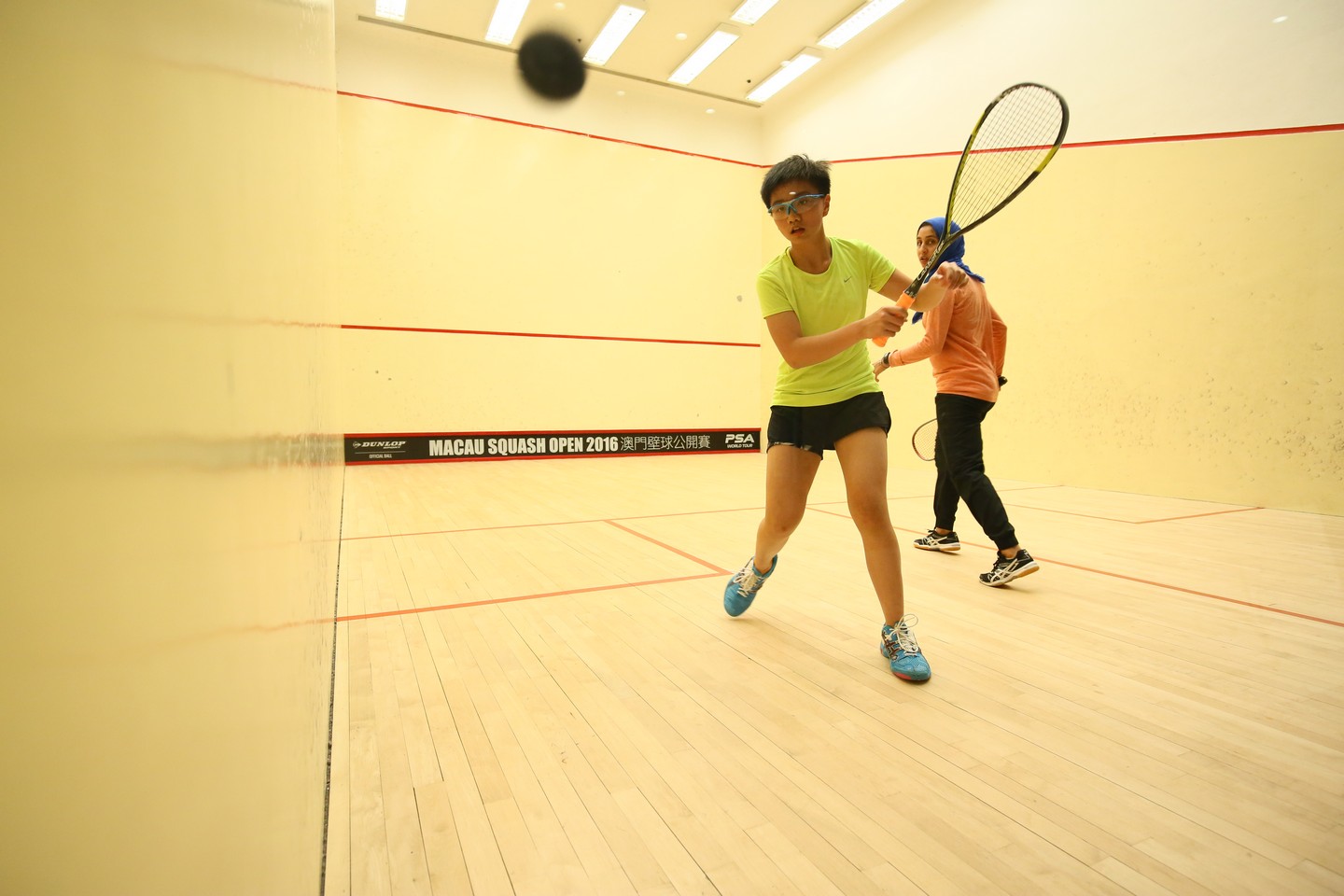 Egypt’s Hana Moataz, the 16 year old from Egypt took to court against local player Yeung Weng Chi, who is a year her junior. While they may be close in age, their standard of play was clearly a mismatch. The world number 85 walked out a winner at a loss of only 7 points over 15 minutes.