There will be a new name etched onto the PSA Men’s World Championship trophy on Friday after Mohamed ElShorbagy was beaten by his own younger brother Marwan in a seesaw match that went to the wire today. With the exit of Mohamed and Karim Abdel Gawad the previous round, all former World Champions are now out of the running for the coveted prize.

In what is only his fourth win over the elder ElShorbagy, Marwan played some exceptional squash for most parts of the match to deserve such a victory on the biggest stage of the game. It has to be said the flow of the match was somewhat unconventional , with Marwan working very hard for the three games he won, while Mohamed simply waltzed through the two he claimed.

The opening game was rather close up to Marwan leading 7-6, after which he let out a loud roar upon winning the next point by wrongfooting his brother. His confidence grew and he dominated the next few rallies to lead after 14 minutes. 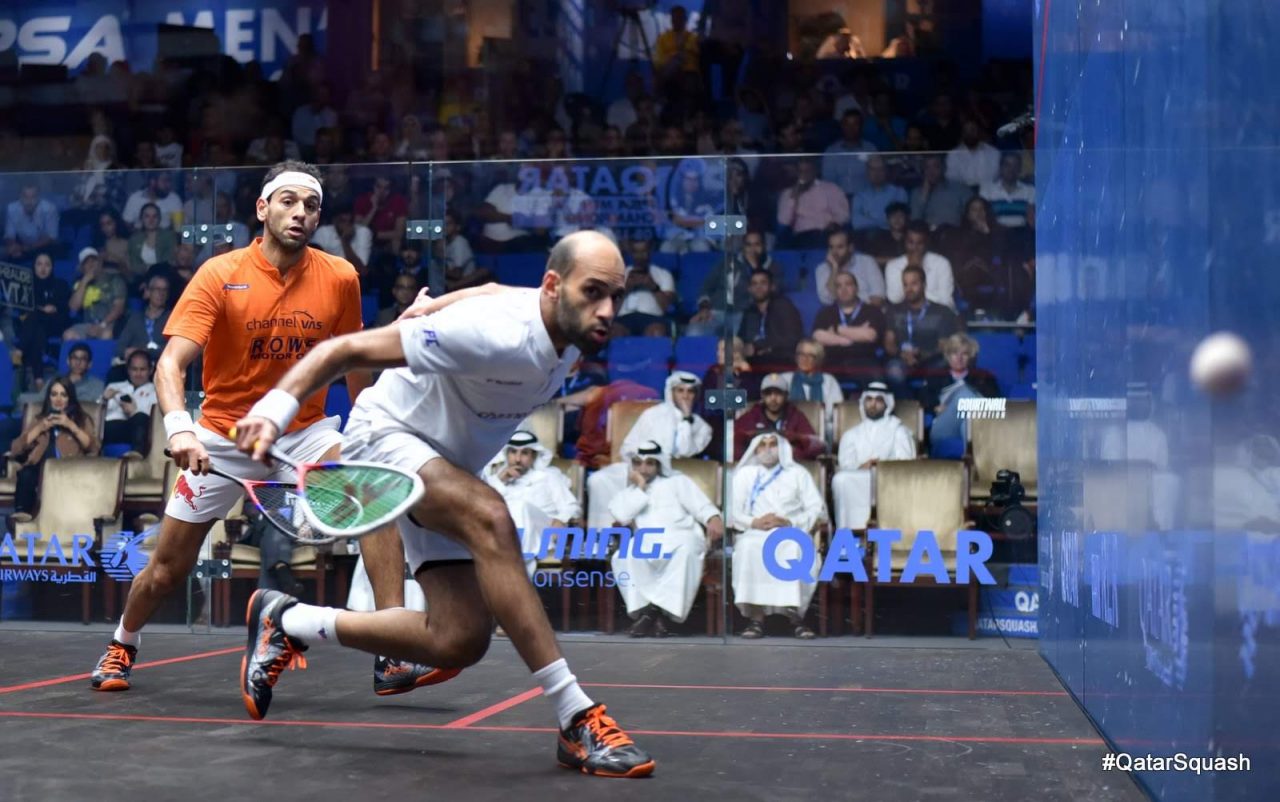 In the second game, it was all Mohamed as he raced to a 4-0 lead before Marwan scored a point. Mohamed continued to surge ahead right after to 8-1 and never looked back, wrapping up in style in the final two points – first a backhand cross court and then a backhand top spin volley, both of which ended in the nick.

The third had to be the crucial game. Both brothers came in hitting really hard, increasing the tempo of the contest and maintaining the pace throughout most of the game.

Marwan was always slightly ahead in the first half of the game. But an attack on the serve took him to 6-4 and turned the game around as Marwan was simply dominant from thereon and closed it out 11-6.

There was not much of a fourth game as Mohamed turned on his “Beast” mode to dominate the entire game that lasted a mere five minutes.

Marwan saved his best for last in the decider. Despite being penalised for asking for a let and playing on to lose a point to 4-2, he was quite unstoppable and raced to an 8-3 lead. When Mohamed pulled back to 8-6, he was then penalised a penalty stroke for a bad movement into Marwan despite hitting a winner, allowing Marwan a three-point cushion to 9-6.

A stroke brought him to his first match ball, one of two which Mohamed saved. In the next rally, an opportunity came – Mohamed hits a shoulder height ball and Marwan slammed it into the nick before throwing his racket in celebration. 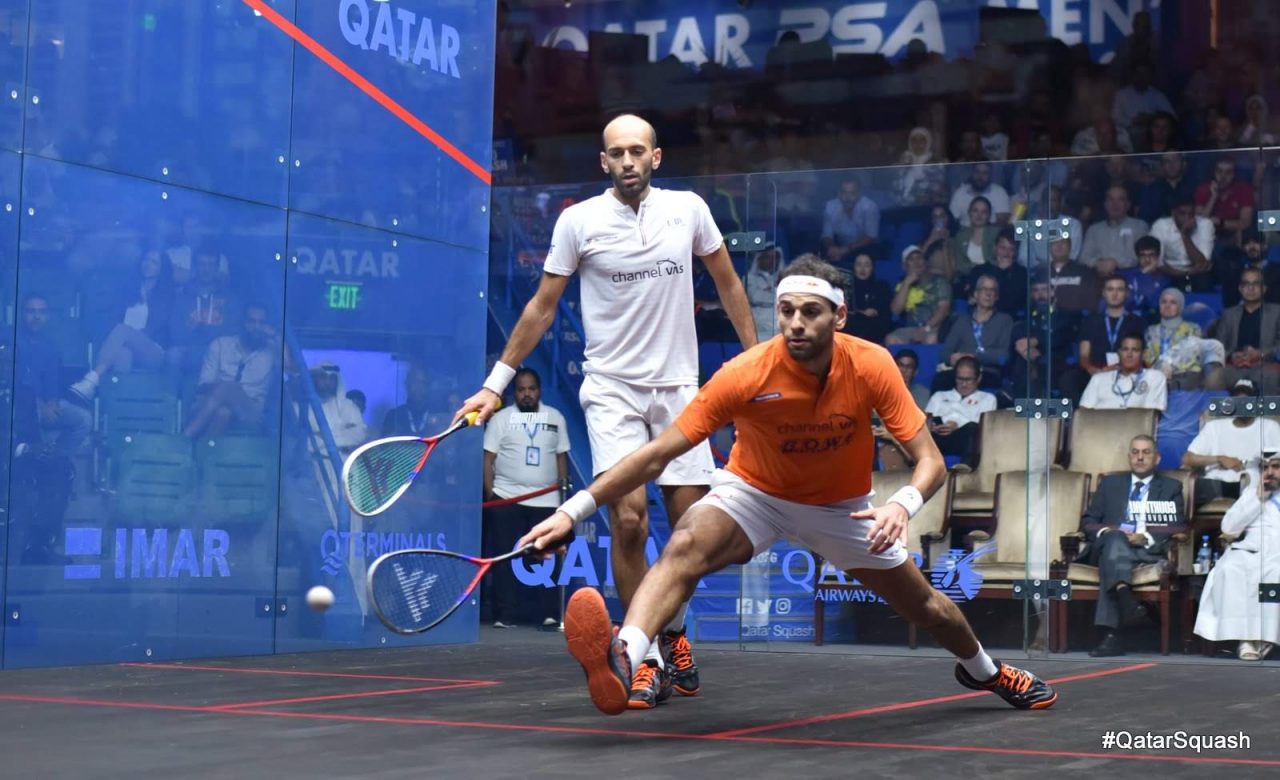 Marwan said: “It was really tough out there. It was five games in less than one hour, but it was very tough mentally. Mohamed is one the most experienced player in the draw, he has played against so many generations and I knew it was going to be really tough today mentally more than physically. I gave it everything I had. I put my heart into that fifth game.

“I had already played him a couple of times this year and each time I’m getting close. I’m really happy with how I responded in that fifth game and I’m happy with how I played overall. I’m very lucky to have (coaches) Haitham (Ashoush) and Nick (Matthew) here. I mean, the way they speak to me between games, it motivates me, pushes me, just so much experience I have in my corner. 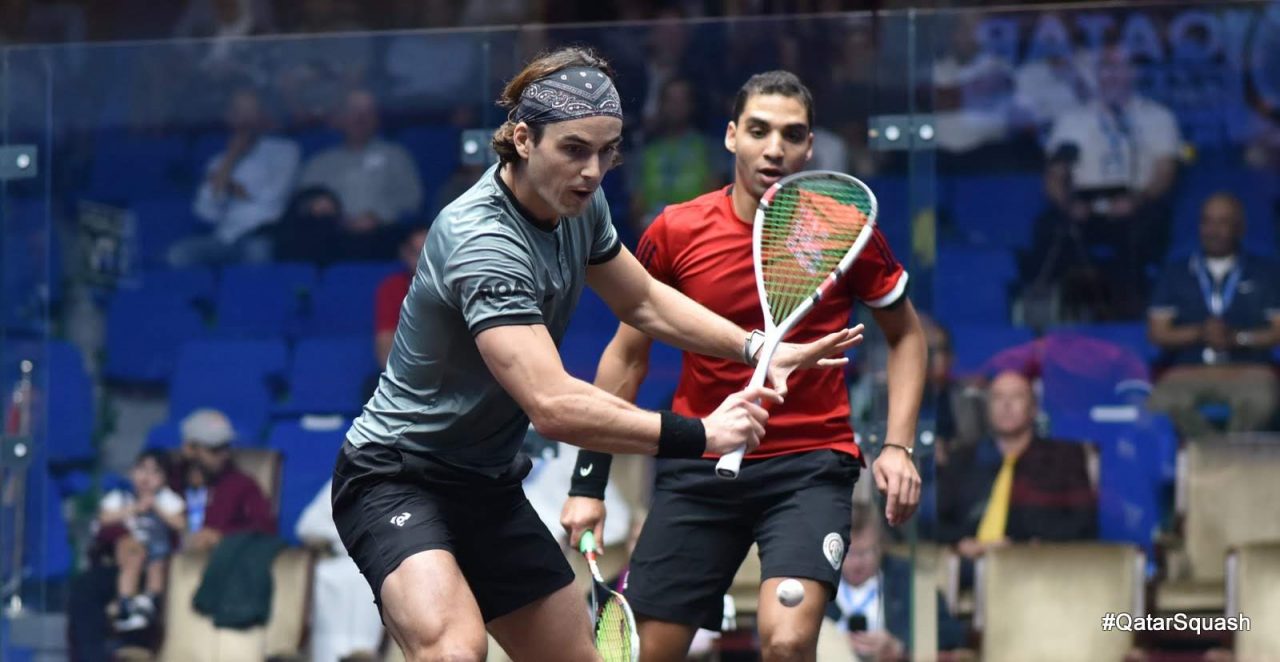 Marwan plays Paul Coll tomorrow, who will be the first Kiwi to play in a World Champs semi-finals since Ross Norman in 1988. It was an impressive showing by Paul, who looked very dominant today having played a two-hour cliff hanger the day before. It is no surprise though, as Paul is well known for his physical superiority.

He took out first time quarter-finalist Zahed Salem in straight games. For most parts of each game, it was Paul who was taking control of the rallies more, and often leaving Zahed chasing down the corners. 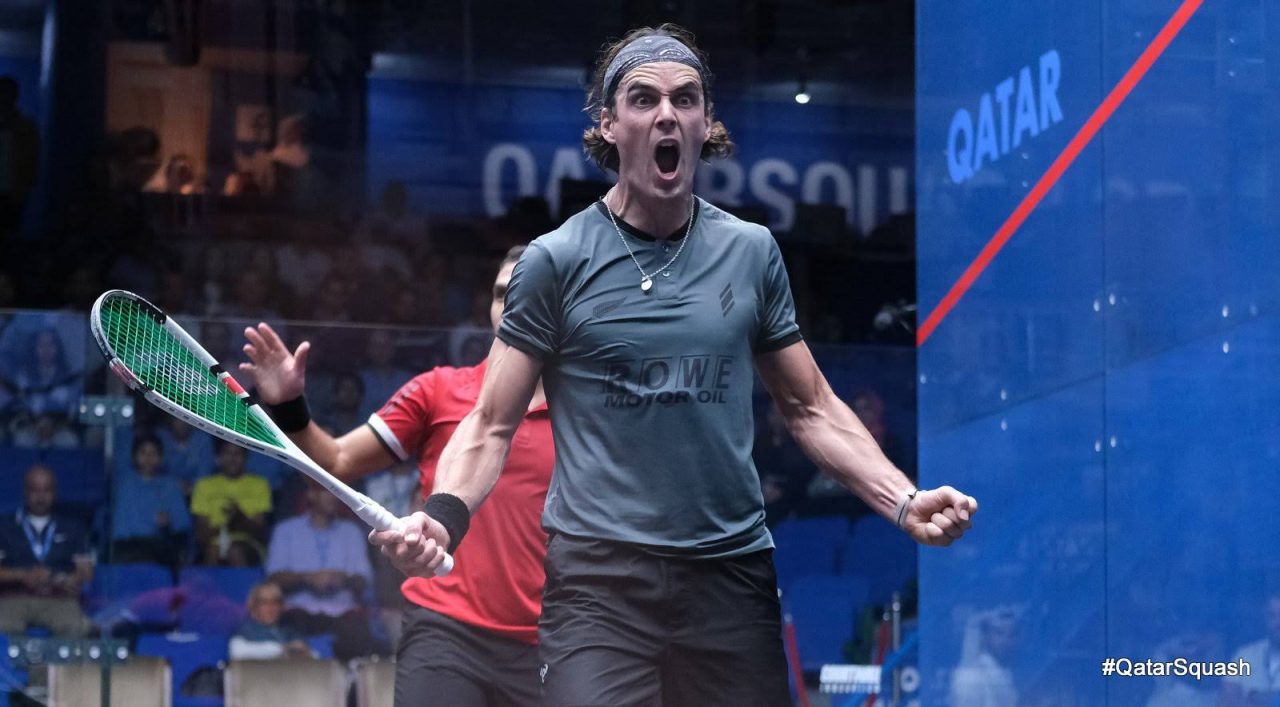 Paul Coll looks mighty pleased to get into the semis

“Very happy to be through to the semi-finals of the World Champs. It was sort of a minimum goal we put coming into this tournament, but I’ve got to put that behind me now. I’m in the semi-finals and I don’t want to stop here now.

“I just wanted to dominate today. Yesterday, I feel I got a little dominated and had my natural game taken away from me. So today, I just wanted to step up and really take the game away from Zahed”, Paul said on his tactics coming into today’s match.

The German Tree Chopper Simon Rosner made it into his second successive semi-final of the World Champs after putting on an impressive showing to halt the run of The Marksman James Willstrop.

The pair, both standing at 6ft 4in tall, produced an amazing first game much to the delight of the crowd. Both players were hitting so accurately and having fresh legs, chased down the most ridiculous shots utilising the long reach they had. 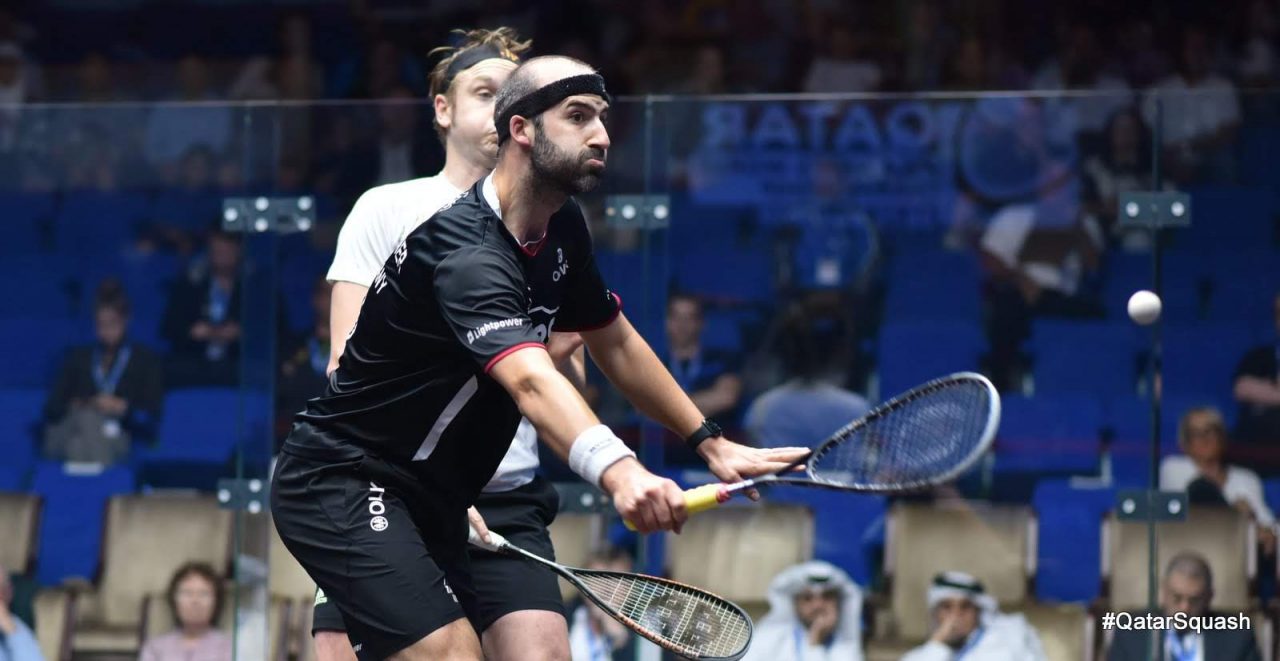 It was obvious right from the start that Simon wanted the ball to travel twice as fast as James. The Marksman so cleverly contained the pace for most parts of the first game, but it was Simon who managed to win the crucial points, taking the game on his third game ball.

In the next two games, James was nowhere near the player he was in the opener. It was always Simon dictating the rallies, winning both comfortably, 11-6 and 11-3 in nine minutes each.

The effects of his heroic upset of 2016 World Champion Karim Abdel Gawad in the previous round might also have been a factor on his physical well-being.

Rosner revealed: “Mentally it’s such a big, big difference whether you’re 1-0 up or down, especially if the game was that long and going into the tiebreak. I knew if I won that first game and if I kept the intensity, I would be able to push through and that is exactly what happened. I kept the intensity up and not dropping down, and that is why I managed to wrap it up.

“You always have to be on your toes with James. He can come back anytime when he gets his second wind. I knew that he was getting a little tired. I heard his breathing as well, but still, no matter how tired he is, he’s The Marksman. He’s able to find the corners really well and if you’re not 100% there, he can take you out”, said the German Tree Chopper of having to be always on the ball with The Marksman.

In the shortest match of the day, second seed Tarek Momen perhaps had his most straightforward challenge of the entire tournament as he beat Peru’s Diego Elias in just 37 minutes. After a blistering start in the first game, where Tarek went short very early, he was tested a little in the second. But that was all as he cruised through once again in the third to get into his third semi-final in five years. 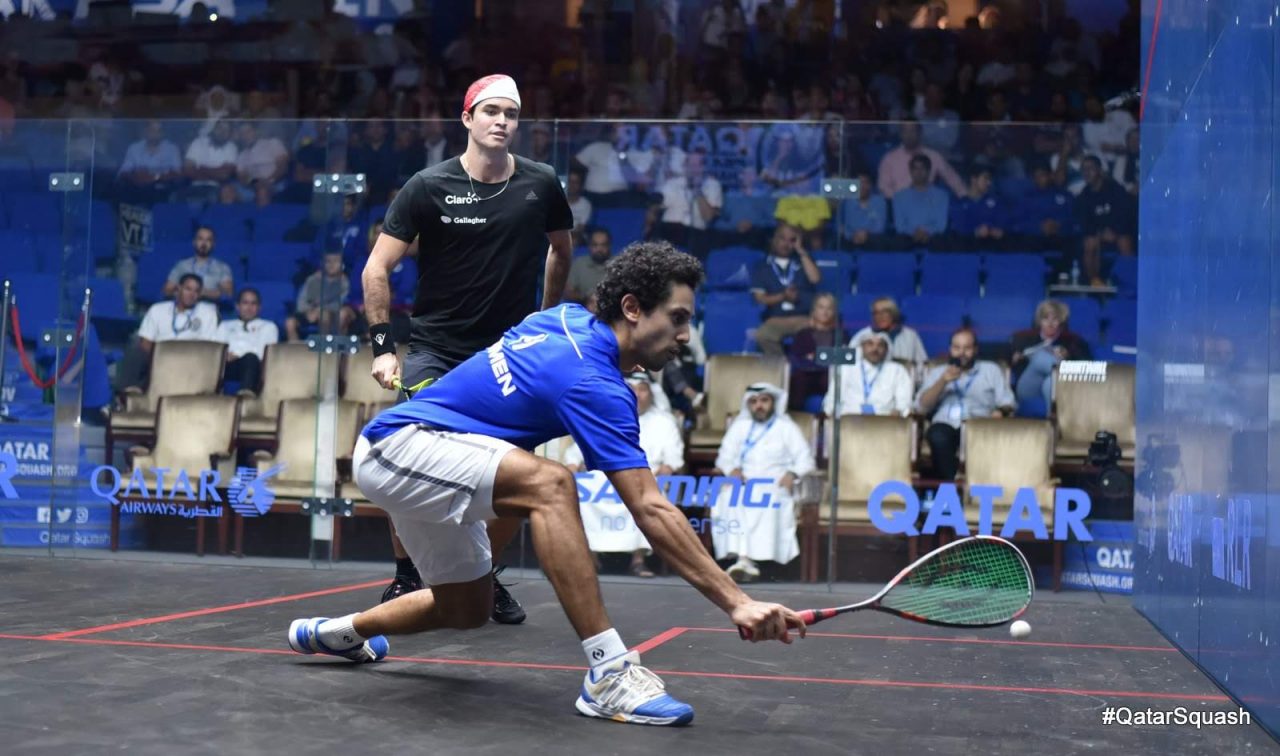 “Maybe the good start that I had made a little difference at the end. I was really keen on trying to get as explosive and tight as possible right from the start. It makes a difference. The match could go 120 minutes over five games or 30-40 minutes over three games based on the start. So I try to learn from the few things that I’ve done wrong in previous occasions and today was definitely a good day at the office for sure.

“It was critical to have a short match today. The tournament is six matches long and I needed something to beat that beating to my body. I’m hoping to do the best recovery now and be fresh for tomorrow”, added Tarek on the fact that he has had some tougher earlier rounds and today might have been his shortest match.