The Malaysian contingent at the HCL SRFI Indian Tour Chennai Leg had plenty to celebrate for after Rachel Arnold and Ivan Yuen both won their finals, albeit in very contrasting fashion. While Rachel was dominant in her final despite dropping a game, Ivan had to fight tooth and nail in his final against local favourite Mahesh Mangaonkar.

Rachel, who was named September’s PSA Player of the Month after winning her biggest career title at the Malaysian Open, followed up her success with a splendid performance all week in Chennai. Winning the title at home in Kuala Lumpur must’ve done wonders to her confidence as she waltzed through most of her matches, never spending more than 38 minutes in court each time.

The 23-year old from Kuala Lumpur’s toughest match was perhaps against compatriot Aifa Azman in the last eight. Apart from that, she was in a class of her own in the other matches, punishing every loose shot sent her way. She was especially clinical in the first two games of the final against compatriot Lai Wen Li, who was simply at a loss for what to do.

“Winning the Malaysian Open gave me the confidence that I needed – knowing that I’m able to beat higher ranked players. It’s been a good start to this season, I couldn’t have asked for a better one. But I definitely want to start doing better in the bigger events, and that would be my next goal”, Rachel said when asked what she thought about her last couple of weeks.

Rachel will have her opportunity to see how she can carry this momentum into the bigger events and what better occasion than the biggest of them all, the World Championships in Cairo. She will be playing home player Salma Hany, the 13th seed in the opening round.

In the men’s final, the battle of the national champions of Malaysia and India provided the longest match of the tournament as Ivan Yuen edged past home favourite Mahesh Mangaonkar in 77 minutes over five games.

After the games were tied at two a-piece, it was Mahesh which looked the better bet for the title after he took 6-3 and 8-6 leads. But a determined Ivan was not to be beaten on the day as he strung together five points in a row to deny a home winner and secure a clean sweep for Malaysia.

“It always feels nice knowing you’re the top seed of the tournament, but at the same time, there is pressure to live up to it. Overall, I would say I’m quite pleased with my performance here. It’s nice to know that I’m playing well and on the right track ahead of the bigger events of the new season. More importantly, I’m especially happy with the consistency in the matches I played”, Ivan said of his week in Chennai.

The win is certainly a good boost for Ivan, who didn’t have the best start of the season after early losses at the China Open and HKFC International, where he lost to Henry Leung in a physical encounter, a loss which he avenged here in Chennai.

Ivan has been drawn to play Diego Elias at the World Championships in Doha, Qatar, a player he’s never played before. While Diego is a tall order, Ivan is positive and looking forward to the encounter.

“I have not played Diego before in a tournament, but I’m sure it will be a good match. I still have time to work on a game plan and some things before going into the match. I’m really looking forward to that”, Ivan added. 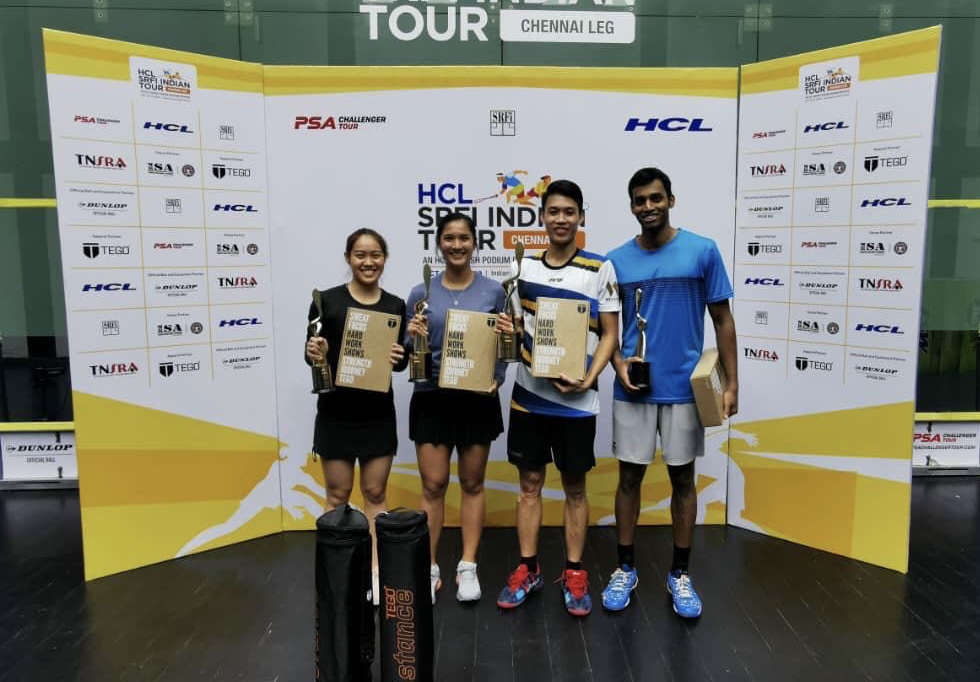 Apart from the pair, Lai Wen Li was the other star of the Malaysian camp. The world number 81 played above her seeding by reaching the final before being halted by her top seeded compatriot Rachel. En-route to the final, Wen Li scored back-to-back upsets against India’s fourth-seeded Sunayna Kuruvilla and second seeded Egyptian Menna Nasser. On both the occasions, the petite Malaysian had come back from a game down to win in five games.

“I am really happy I was able to push through to get the win, as I felt I wasn’t playing my best squash. I really wanted to get the wins to boost my ranking and at the same time, knowing that if I did, it would definitely help build up my confidence again to play well on the tour”, Wen Li said of her feat in Chennai.

There were also good showings from the others in the Malaysian camp. Aifa Azman, semi-finalist at the World Juniors in Kuala Lumpur, reached the last eight after upsetting Egypt’s Farah Momen. Her world junior teammate, Chan Yi Wen was also a quarterfinalist after upsetting higher ranked compatriot Ooi Kah Yan. In the men’s, Addeen Idrakie made it to the last eight after an upset win over Hong Kong China’s Lau Tsz Kwan and put up a good fight against Mahesh Mangaonkar before crashing out in four.