MOHAMED EL SHORBAGY, the young pretender to squash’s future riches, took down World Champion Nick Matthew in Doha tonight to be crowned Qatar Classic winner…just as he predicted a year ago.

The 22-year-old Egyptian prince, 11 years Matthews’ junior and twice world junior champion, ripped the trophy from the Englishman’s grasp with an awesome display of power hitting and precision.

Vociferously supported by the Arabic crowd, Elshorbagy set a blistering pace in the opening game – producing immaculate squash while forcing uncharacteristic errors from the Matthew racket to win the game 11-5.

World No.3 Matthew, marking his third successive PSA Tour final appearance, struck back in the second – winning five points in a row from two-all while the Egyptian introduced the first errors of the match into his game!

Matthew took the game to level the match, and scored a succession of winners in the third game to move 6-2 ahead.

But suddenly the tables turned and Elshorbagy took control: the fired-up former world junior champion from Alexandria reeled off nine winners in a row to close out the game and regain the lead.

Elshorbagy continued the rout in the fourth – continuing his winning run for a further two points before an error finally returned the initiative to the Englishman. Matthew led 6-4 before Elshorbagy drew level. A massive rally which took Matthew to 8-6 clearly took its toll on the young Egyptian as the Sheffield star went on to take the game and again level the score.

The decider saw Matthew move 3-0 ahead, then Elshorbagy come flying back to open up a 5-3 lead before a broken string to the Egyptian’s racket saw Matthew claw back a single point.

But, armed with a new racket, Elshorbagy was unstoppable – holding serve through to match-ball at 10-4 before clinching the title with a trademark back hand volley into the right wall nick!

As he struck the winning shot, El Shorbagy screamed with delight, punched the air then said:”Last year, when I picked up the runners-up trophy, I promised the promoter that I would come back next year and win the tournament – so I’m glad I kept my promise.”

“To beat Nick today is such an honour. I cannot believe I have beaten him in five. It is such an unbelievable feeling. In this sort of match he is unbelievably strong. I knew I had a chance to win this and I am so delighted that I took it.”

Matthew also had praise for the new champion: “It was a great performance from Mohamed,” said the former world No 1.

“When he grows up, he’s going to be a great player,” joked the runner-up. 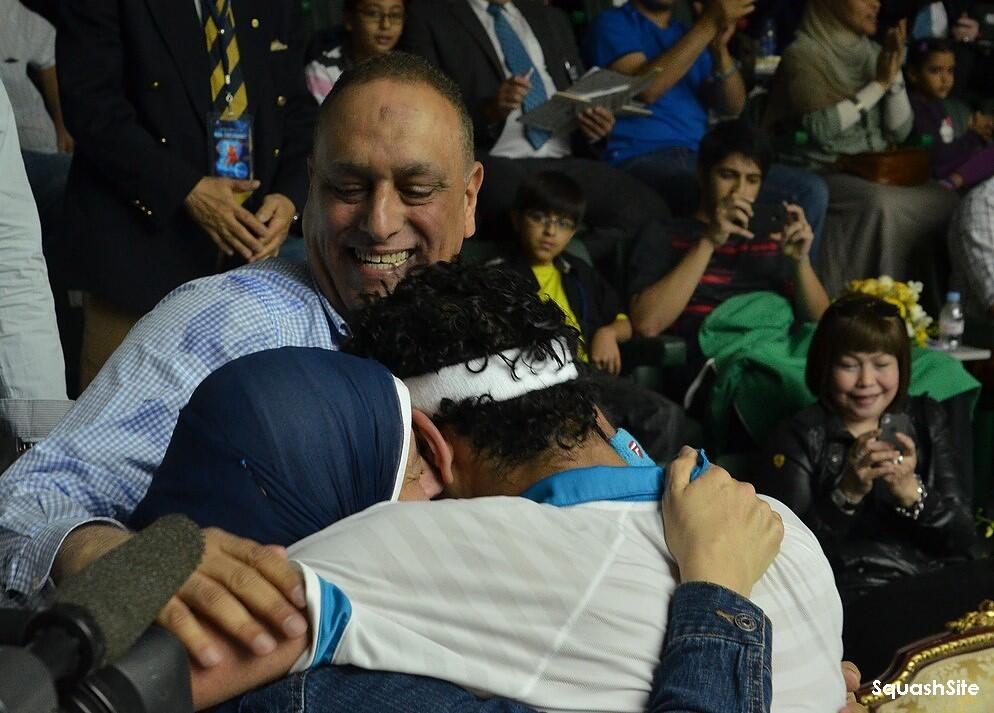