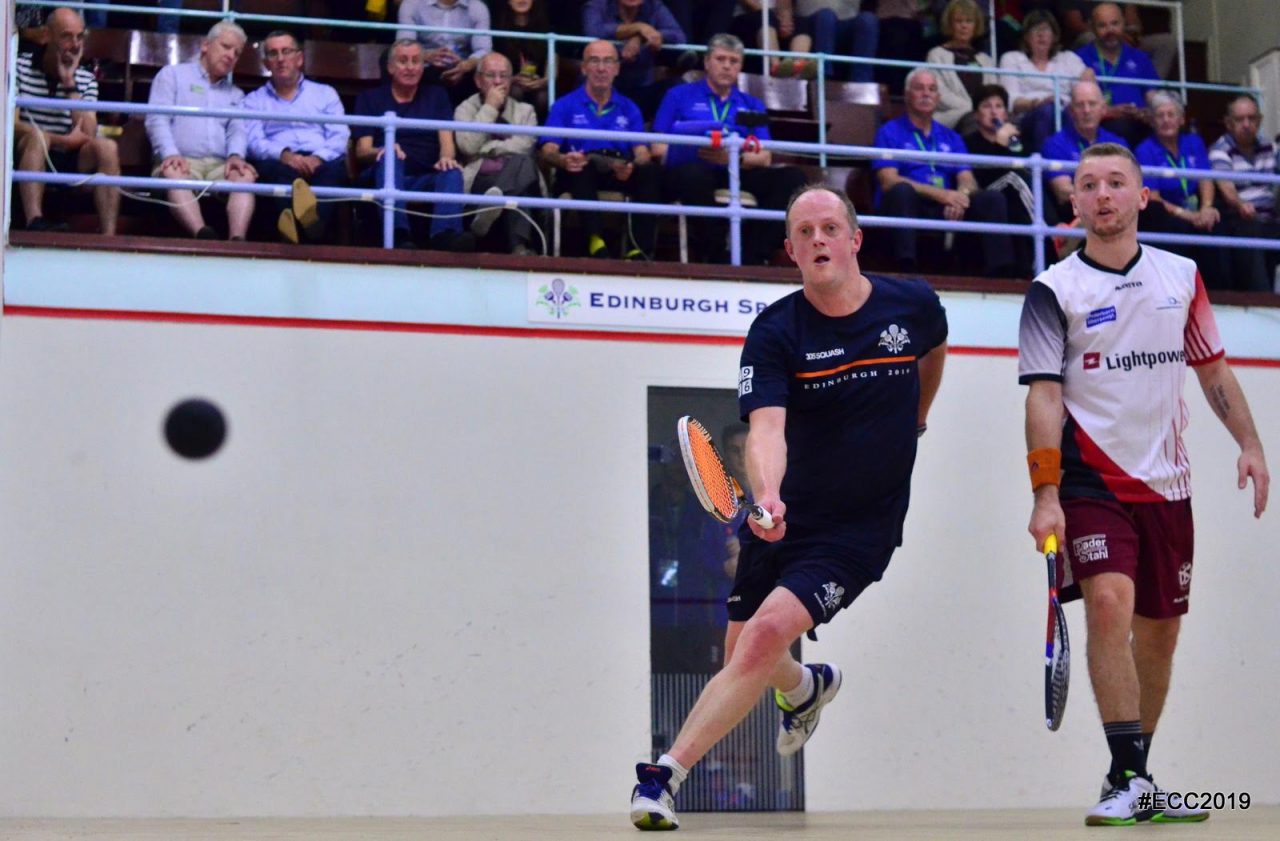 When Simon Boughton went on an impromptu trip to Milan in the ’90s, little did he know that it would sow the seeds for a squash coaching career which currently spans 28 years.

Based at Edinburgh Sports Club for more than 20 of those years, Simon is a prominent coach in the capital, training players at all levels – Juniors, Seniors, Performance and Masters.

Edinburgh is one of those wonderful clubs that have stood the test of time. In the west end of the city, the club is tucked away at the bottom of a slope, surrounded by trees that are nurtured by the Water Of Leith. The Scottish Museum of Modern Art is close by on the other side of Belford Road.

Boughton feels at home in these luxuriant surroundings, where a gym and padel courts have been added to the six squash courts and three tennis courts that the club began with 33 years ago. It also boasts the only hardball doubles squash court in Europe.

He had dipped his toes into coaching back in Nottinghamshire, where he grew up, enjoying a promising playing career reaching England Under-16 top 10 status before representing his county at senior level.

Simon admits he didn’t have “the single-mindedness” to turn pro as a player, instead becoming a somewhat accidental full-time coach – a career which he loves.

“I never thought I would do it as a career but I just followed where the love of the sport took me,” he recalls. “The opportunity in Italy came along which I hadn’t expected or planned.

“I was training hard as a player at the time and travelled to Germany with a friend, who was half-Italian, to practice.

“But the guys we were due to play with didn’t turn up so we decided to jump on a train to visit my pal’s family in Milan.

“Before I knew it someone out there asked if they got me a job as a club coach would I stay. I said yes even though I couldn’t speak a word of Italian and it was challenging to begin with.”

He continued: “I got hold of a list of all the squash phrases in the language and initially started coaching with the list in one hand and a racket in the other.

“A month or two later I could speak Italian in squash and not a lot else. I stayed for a year coaching at Poli Squash Club in Milan and loved it. I’ve kept some great connections out there and gone back to play in the Italian leagues for Milan, Florence then Turin and done plenty of coaching weekends.”

It had whet his appetite and he soon was enrolled at Brunel University London for a degree in Sport and Leisure Management.

After graduating, his move to Scotland followed as he became a coach at Bridge of Allan Sports Club for two years before taking on the role at ESC, where he is Head Coach.

“I just love working with people and the atmosphere surrounding a club like ESC is brilliant,” he says.

“We’ve got some promising Juniors like Rory Richmond and one of the satisfying parts of the job is introducing kids to squash and seeing them still play 20 years later.

“You get a lot from that and squash has been a massively positive thing in my life. I make a living from it but I would still be a member of a club if I wasn’t coaching.”

While trying his luck on the PSA Tour wasn’t for him, the 48-year-old continues to play competitively for ESC in the East and National Leagues.

He is also a four-time Scottish Masters National Champion and was part of the ESC squad which secured bronze at the 2019 European Club Championships on home turf.

And, as the squash community waits for a return to court, Simon has been getting creative and keeping himself in good shape.

He said: “I normally wouldn’t have time for all the training but during lockdown I started a fitness blog on the ESC Instagram account showcasing a variety of circuits taken from different sources.

“It’s kept me focused and while I can’t coach or hit a squash ball in anger just now I’ve recently been back at the club playing some tennis and padel outdoors.

“It’s good to have a run around and finally get a chance to hit a ball, albeit not a squash one just yet.”