Squash cheers in NZ as Megan is crowned

Lee Horton November 19, 2013 No Comments on Squash cheers in NZ as Megan is crowned 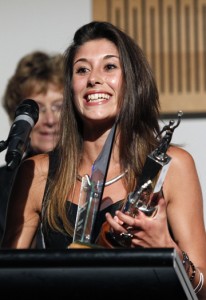 A huge cheer rang out from a large squash contingent when Megan Craig was named New Zealand’s Marlborough Sportsperson of the Year in front of a sold-out crowd in Blenheim.

Crowned junior sportswoman of the year earlier in the night at the Marlborough Convention Centre, 20-year-old Craig became just the fifth woman in the event’s 47-year history to win the top prize and the first since diver Susan Stewart in 1984.

She is also the first non-rower to be presented the major silverware since cyclist Jason Allen in 2005.

Among a year full of achievements, the dedicated squash star lifted her world ranking to a career-high of 46, won her fourth professional title and finished third at the national champs, as well as earning selection in the New Zealand squad for next year’s Commonwealth Games.

Summing up her win in typically bubbly fashion, Craig said she was delighted after being nominated several times before.

“Every year I think someone else is going to get it . . . but when I won the junior one I thought I might have a chance.

“[Winning] was a really weird feeling, it doesn’t feel normal.

“All the other years I’ve thought I’ll never get it until I’m world No 1 because it’s so much harder in squash, so I’m pretty stoked. And there were so many squash people here tonight, so that was cool.”

Craig beat the four other category winners to be named Sportsperson of the Year.