Alan Thatcher May 19, 2020 1 Comment on Squash-mad doctor writes from the heart of the Italian Covid-19 epicentre

It is a real honour to publish this article from a squash-playing doctor, Federico Rebustello, who has experienced the strain of working at the hospital in Padua at the epicentre of the Italian coronavirus outbreak.

Here, Federico tells Squash Mad readers about the moment he heard about the virus reaching his hometown in Italy, his workload at the hospital, and how he has been able to rekindle his love for squash.

Helping him on his squash journey is renowned coach Scott Fitzgerald, who wrote movingly about how he had to cut through some red tape to allow the courts where he is based to reopen.

Once again, Squash Mad takes you to the heart of the issue. Here is Federico’s report from Padua:

Finally, that weekend of February the 21st has arrived. I had taken two days off to go to the mountains with my girlfriend; that year, between one thing and another, we had not yet seen the snow.

I was just signing off of a routine night shift in the ER and I was collecting the last energy I had left to drive to my family home in the mountains of Friuli.

The radio was croaking in the background as we entered the highway when the news came on at a certain point. As always, I turned up the volume and heard the announcement: “The first cases of Coronavirus in Italy.”

I concentrated on the radio a little more than the road. The report continued: “The first six cases have been identified, two of which are in a serious condition, in the town of Vó Euganeo, in Padua.”

I turned my head in the direction of my girlfriend. We both stared at each other incredulously. Vó Euganeo is just few kilometers from our house and the hospital where I work.

The Coronavirus (which then “affectionately” became COVID), was until then considered a distant entity that seemed not to belong to us. But at that moment it was there in the car with us; maybe I was one of the infected too. 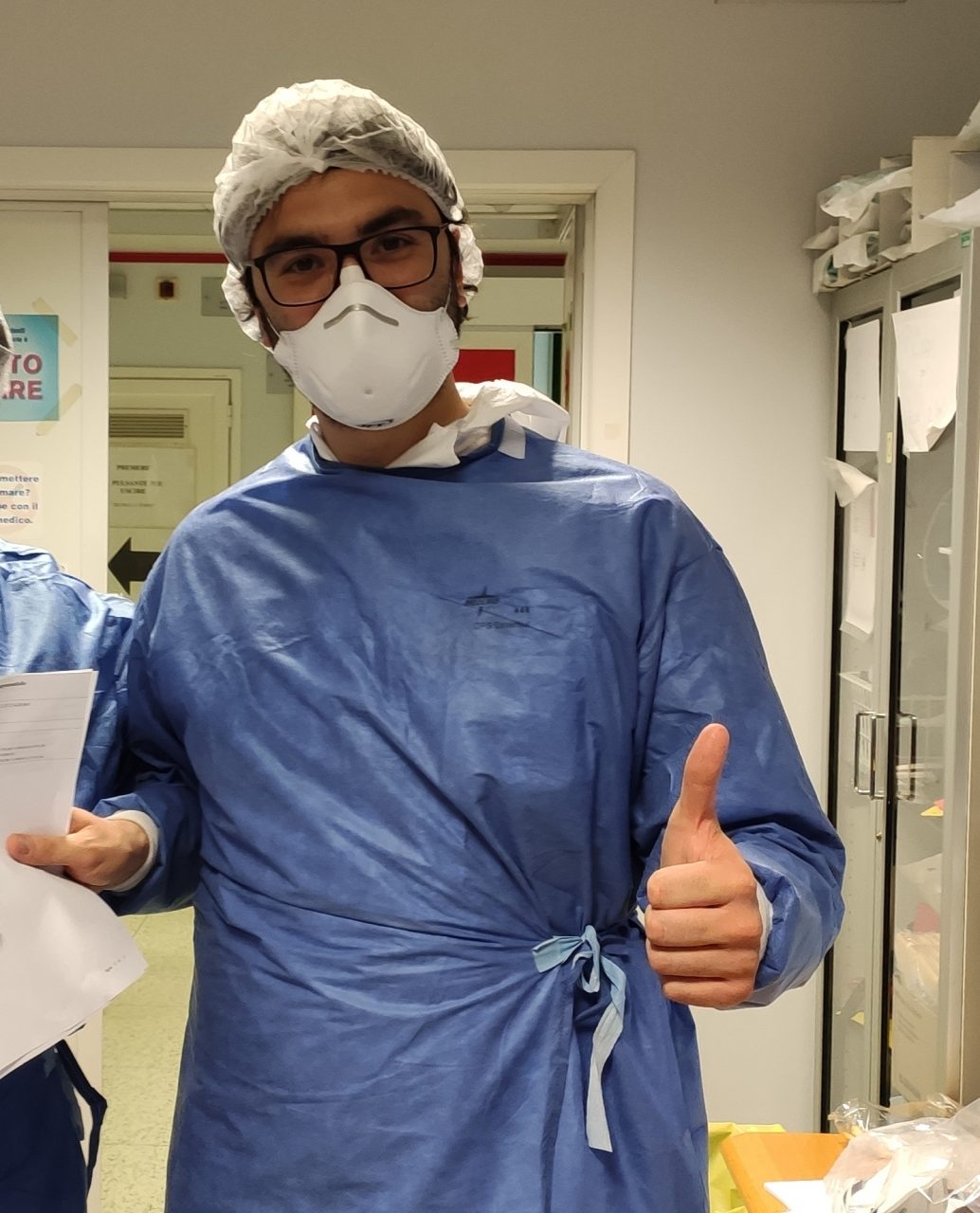 Federico at work at the hospital in Padua

In my mind the faces of the patients I had visited in the last days passed quickly: young, old, with a cough, with fever… everyone could have been a patient infected with Covid-19. Many of them, in fact, came from that beautiful country in the Euganean Hills, Vò Euganeo, the first European epicenter of what will become the Sars-Cov2 pandemic.

A few days later, on March 9, Italy declared a lockdown and for many people everything stopped. For me, however, simply, everything changed.

Working in the emergency room took on a bit of a spooky feeling. We all started dressing like painters, sweating under plastic overalls and those who, like me, wear glasses, learned to work in the fog.

But the most peculiar thing was the change in our patients; sore throats, headaches, dizziness, abdominal pains, etc… were incredibly gone. The A and E accesses dropped dramatically and those who came into the hospital were patients who were really sick.

We had almost 200 fatalities, and 4,000 positive patients in Padua from the beginning of the pandemic.
At home I live with my fiancé, who is also pregnant, and we both decided to remain in the same flat despite my working in a hospital treating so many sick people.
When I finished the shift I changed all my clothes in the garage, then came inside the house without touching anything and with a new pair of shoes that didn’t see the outside floor. I would have a hot shower, clean myself with a dedicated detergent, essentially chlorhexidine. Then I would sanitize my glasses and my phone (which remains inside a transparent bag during the shift and far from patients).

Obviously also the gyms and sports centers closed, and with them also the Plebiscito, a wonderful place of sport on the outskirts of downtown Padua, where since I was a little boy I played rugby games or went swimming with friends.

Here there is also a Squash Club, a sport that only a few months before, almost by chance, I had begun to know. I also found out that the technical director of those courts is an amazing man with a worldwide reputation and excellence in this sport: Scott Fitzgerald. A player and a coach with incredible skills as well as a person of great substance.

During the weeks of the lockdown there was a lot of communication between Scott and me. I told him about the Covid situation in the hospital and he took me on a virtual journey through the secrets of squash.

I like to think that this allowed both of us to stay a little bit more in touch with the outside world; he could have direct feedback on the evolution of Covid-19, and I remembered that there, outside the hospital, there were not only sick people and that one day I would come back to sweat inside those courts.

It took two months of total closure of activities and lockdown to see a significant and lasting improvement of the situation, and so, since May the 4th, we are gradually returning to normal.

The Plebiscito Sports Centre is also back in operation, and with Scott we have resumed training for two weeks now, albeit with the necessary precautions (see Scott’s article).

On the web I read many articles on the possible resumption of sports activities in squash courts: from the most possible situations, up to the scenic definition of “death chambers” as described by a doctor based in New York warning against a return to the courts without proper hygiene protocols in place.

Squash, like sport in general, is an essential element of society and as such must necessarily take into account the epidemiological situation of the geographical area where it is practised. 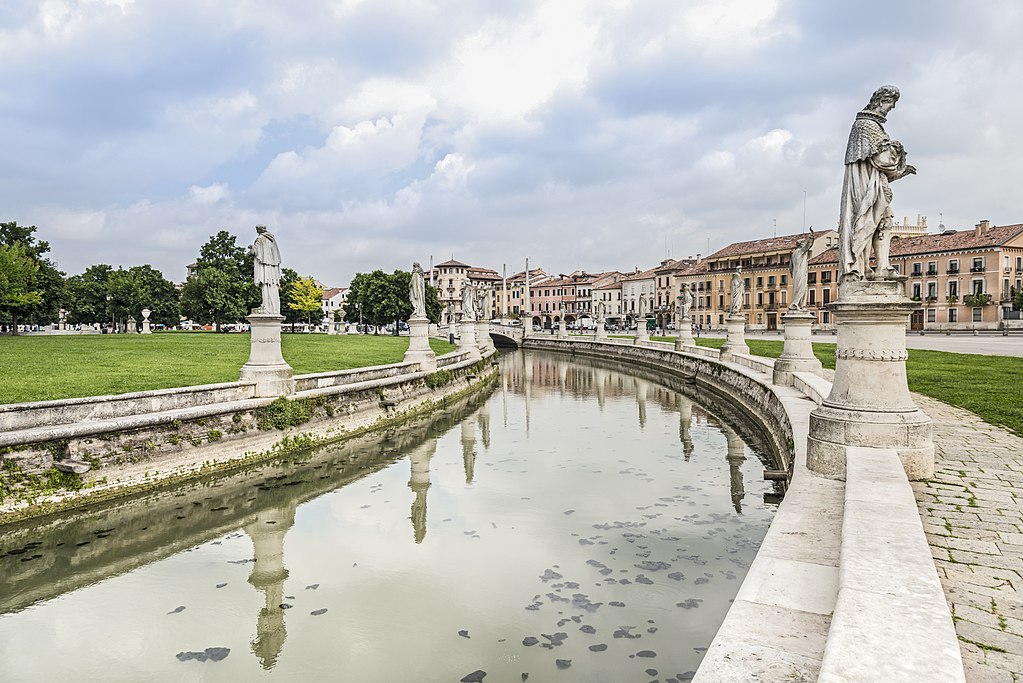 The beautiful city of Padua (image courtesy of Wikipedia)

One cannot think of playing squash, like any other sport, during a pandemic, but it is equally unthinkable to return to the court thinking that the risk of contracting the virus is zero.

It would be like training intensely every day without the risk of spraining an ankle. There is no such thing as zero risk. Instead, our goal must be to implement all measures to minimise the risk (do not crowd, do not touch surfaces with your hands, try to maintain a safe distance, wear the mask in common areas, etc. …).

Personally, however, I believe that a key point of the problem, in addition to “how” to resume, is “when” and “how much” to resume. In fact, it is necessary to consider the epidemiological moment in which one finds oneself, also comparing oneself with experts in the field.

The reopening must be cautious and gradual and the changes must take place at intervals of no less than two weeks. You must act by monitoring the situation and manage the access points carefully so that you can close the loop quickly in case a player or visitor tests positive for the virus.

In short, the caution in this phase must be maximum, but somewhere you have to start.

I wish you all a safe return to training, and I hope it’s soon. Good squash to everyone.