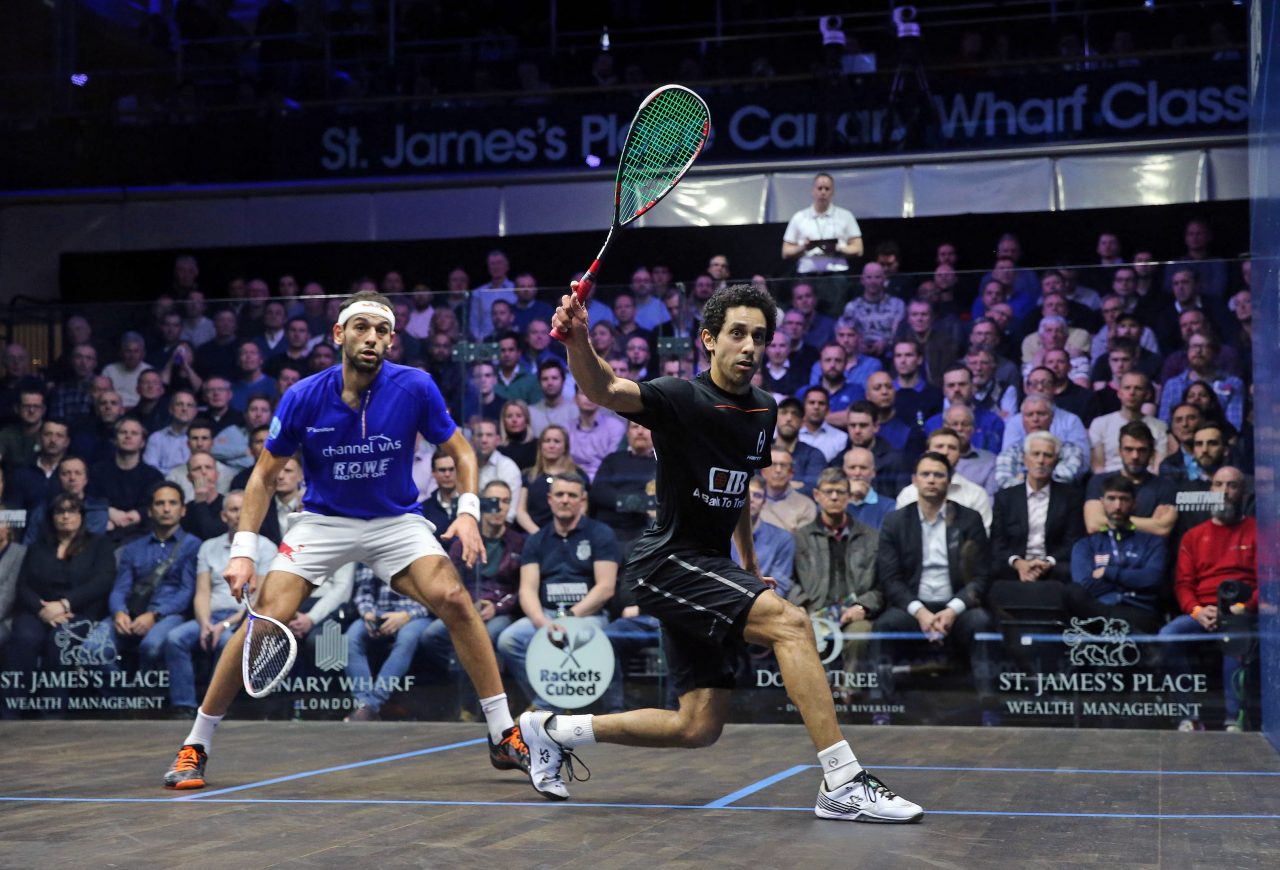 Tarek Momen in action against Mohamed ElShorbagy in the semi-finals of the St. James’s Place Canary Wharf, the last match for world champion Momen before the global lockdown

The start of next season’s PSA World Tour is certain to be delayed by the global impact of COVID-19, says reigning World Champion Tarek Momen.

Squash has already been ranked among the most high-risk sports for the spread of the coronavirus in a report commissioned by the Italian National Olympic Committee.

And the Egyptian says it would be unrealistic to think tournaments can resume within months given the travel restrictions still in place around the globe.

“I think it’ll be hard to start the season again in August or September, mainly because of the restrictions on travel,” Tarek said.

“Some countries may take longer than others in lifting restrictions and until that happens in most countries, it’ll be hard for the tour to resume at full capacity.

“We get updates from the PSA every other week on the status of the tour. They’re trying to come up with alternative plans in case we couldn’t start in September, but nothing is confirmed yet.

“It’s a period of uncertainty so it’s hard to make any decisions right now.”

Tarek has been holed up in his home city of Cairo with his wife Raneem since flying home from the St. James’s Place Canary Wharf Squash Classic in London in March – the last men’s tournament before the tour was suspended. Tarek lost in the semi-finals (picture gallery below) to Mohamed ElShorbagy, who went on to beat Ali Farag in an epic final at the East Wintergarden.

Since the lockdown was implemented almost three months ago, some countries around the world are slowly starting to open up their economies, but Momen says Egypt is far from reaching that stage yet.

“Unfortunately the situation is getting worse at the moment with the number of cases rising every day, exceeding the capacity of hospitals and health care centres,” he said.

“We’re hoping things get better in the coming few weeks.”

Tarek, currently world number 4, has made no secret of his desire to reach the top of the rankings. So how does he feel about the enforced break?

“Well, the rest was welcomed at first, but then the break proved challenging having to push ourselves to workout despite not having any targets or goals,” he said.

“The lack of motivation eventually got to me and I had to take another small break to gain back the desire to push, even if there are no targets at the moment.

“My hunt for the No.1 World ranking will have to wait a little longer. Right now, I’m more concerned about our safety and well-being.”

Tarek and his wife Raneem – who share a Guinness World Record after becoming the first married couple to become world champions in the same sport – have filled their days since the lockdown exercising at home and watching Netflix. Tarek has also been teaching himself French.

Despite being one of squash’s power couples and sharing the same coach, Haitham Effat, the 32-year-old revealed he and his wife are rarely on court together.

“We don’t really train together even though we have the same coach. Maybe once every few months we go for a hit when we both can’t find training partners,” he said.

As the fate of many community squash clubs hangs in the balance amid the uncertainty about when they can reopen, Tarek says fundraising initiatives may be the only way to keep them from going bust.

“We should stick together during this tough period,” he urged. “Like with PSA’s latest fundraiser We Are One, members of the squash community, whenever they can, should contribute to help out struggling businesses, clubs or even coaches to get through this tough phase until they can start earning again.

“I hope everyone stays safe and soon enough we can all go back to doing what we love most – playing lots of squash.”