Egypt’s Tarek Momen was crowned World Champion today at the Khalifa International Tennis and Squash Complex. The World No.3 put up a stellar performance to beat New Zealand’s World No.5 Paul Coll in straight games to win his maiden World Championship.

The pair, who both had never won a major Platinum title in their career, came in today with the opportunity to make this biggest title the sport has to offer as their first. For Tarek, this was also his second opportunity after just losing out to Ali Farag in the previous edition.

Playing in Doha with a very strong Egyptian crowd behind him, Tarek was especially sharp this evening, especially in placing the ball at the front left corner so well and having Paul scrape it out, often creating an opportunity to attack.

The opening game was a close affair and while Tarek was ahead for the entire time save for the first point, he was never more than two points ahead for most of the time.

At 8-9, Paul was forced to do a split at the front right corner to save a shot, but was unable to get up to give Tarek game ball at 10-8, which he duly converts with a cross court that was out of reach of the Kiwi. 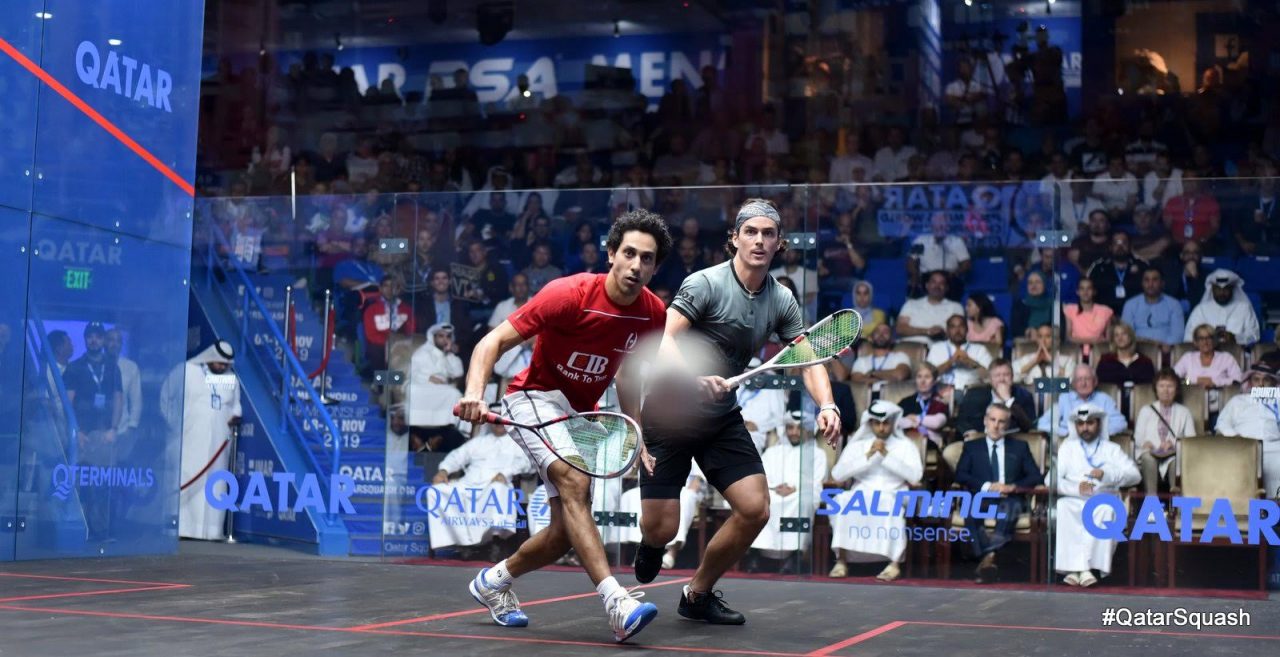 Tarek Momen (left) was extremely sharp to the front today

Tarek continues to dominate at the start of the second game, racing to a 3-0 lead, sending Paul into an off-balance position, something that is rarely seen from perhaps the fittest man on tour.

It was very one-sided and it was clear Paul was not moving as freely in this game, a fact exposed by Tarek who put his volley drops and boasts to such effective use. The dominance of Tarek in this game was never seen throughout the tournament and after 10 minutes, he wins the game 11-3 and was now a game within the title. 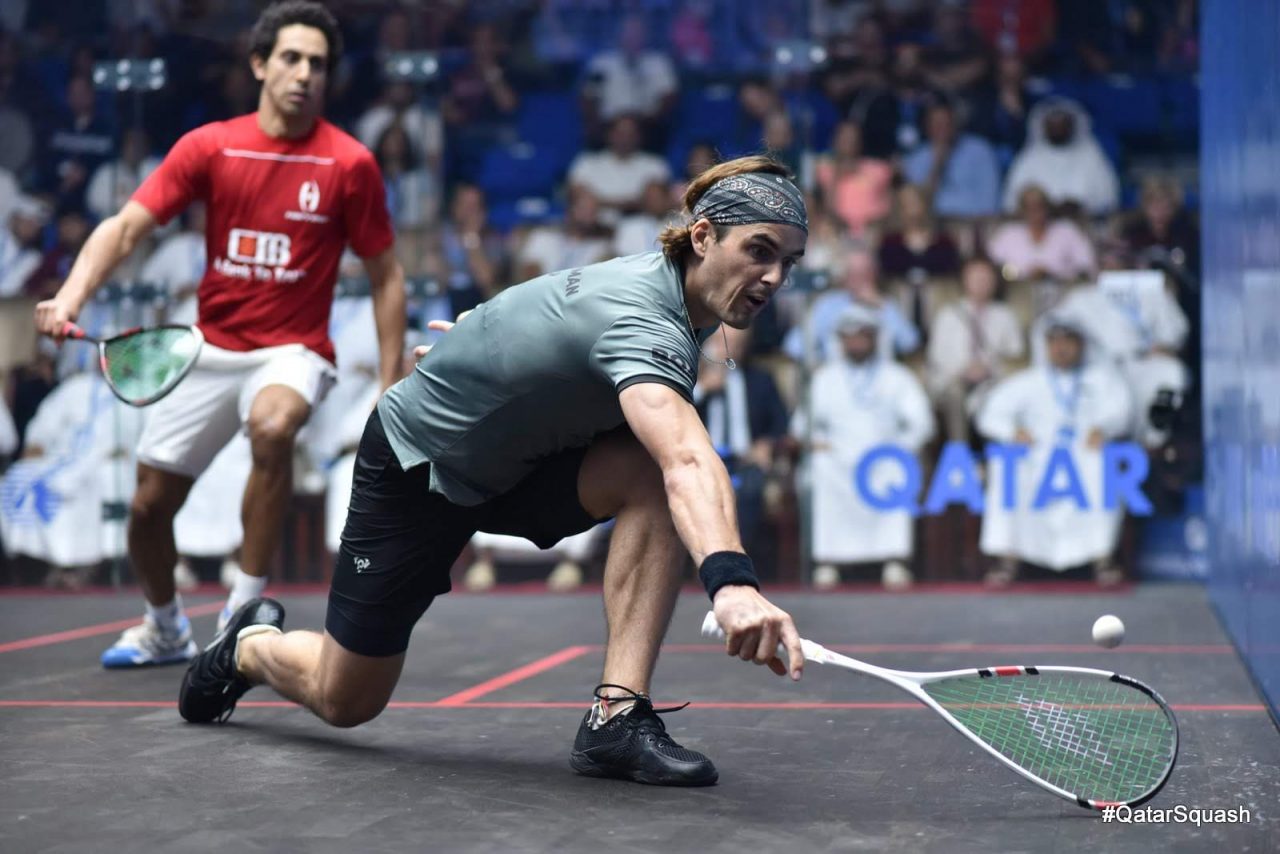 At the break, Paul had his right quads strapped and that certainly did not look good. Tarek continued to pile on the attacks from the word go on the third game. For a player like Paul, who is known for his quick recovery after each shot, things didn’t look right at all as he was often seen off-balance and wrong footed.

It didn’t take long before the end came, and a simple forehand drop from the T finished the match. Tarek drops his racket, turns to the crowd and buries his face in his hands in disbelief.

“It’s unbelievable! I still need to digest and take a while to believe that I’ve achieved that. It’s been a childhood dream of mine to be a World Champion. I’m 31 now and at some point, I was wondering if I’ll have the opportunity to do it, so to be able to do it as this age and feel I can give it a few more years, it’s unbelievable. I have worked so hard for this and I am so glad it has finally paid off.”

As dominant as Tarek was, we asked if that was his plan going into the match and if going short so often was always part of the plan.

“I knew it was going to be physical and I wanted to push myself as hard as I can and stay with him so that maybe at some point, I can try to impose my game and expose a little bit of his movement. But I had no idea how it was going to pan out. Eventually I managed to get the win in three games, which is unbelievable.

“It was about changing directions. I just didn’t want to keep going in one flow. He gets really confident with the flowing pace. Whenever there are sudden changes, things get disrupted a little, I can come up with something to attack. I just wanted to break the rhythm and not go for a steady pace in there with Paul.” 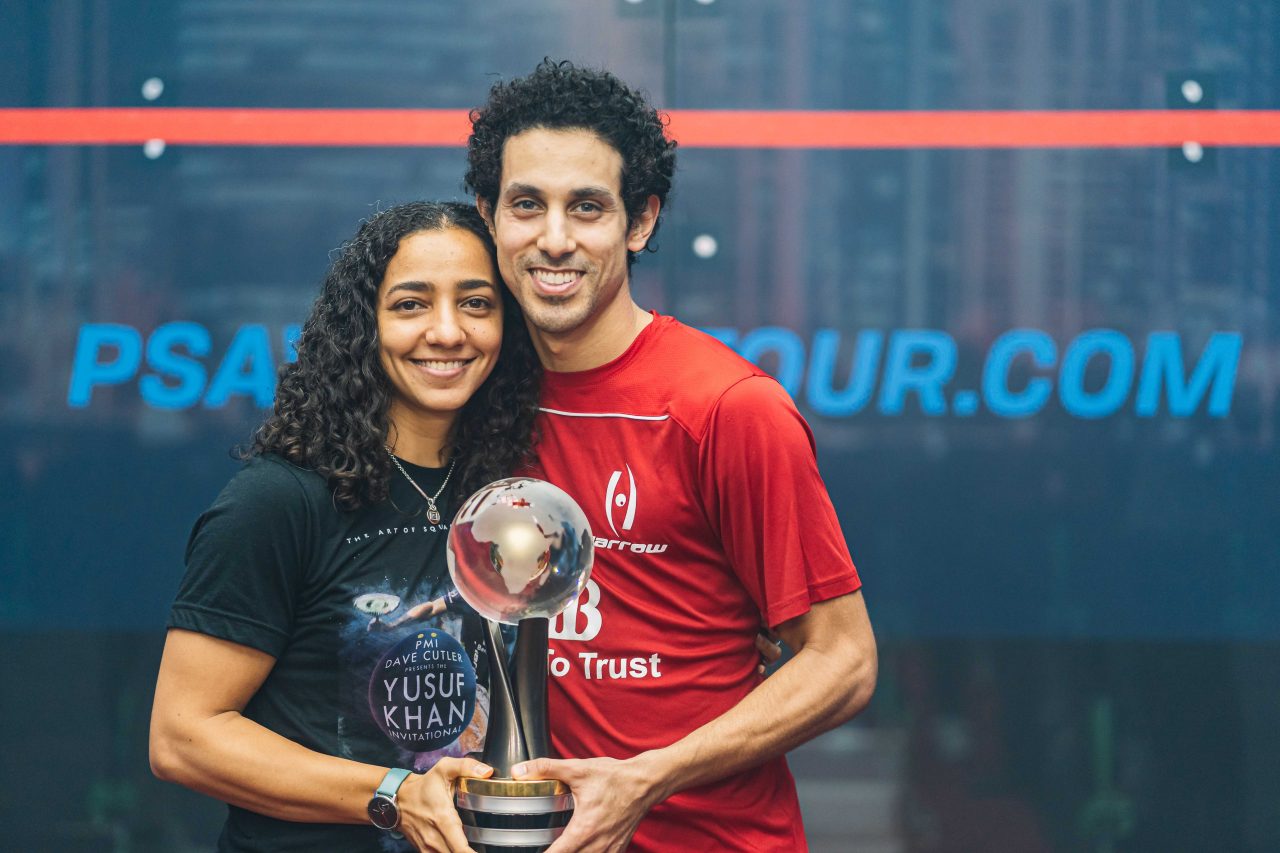 Tarek’s win today also creates squash history as he and wife Raneem El Welily, who won the women’s title in 2017, are the first married couple of World Champions in the sport.

“I didn’t know that this was something we could achieve until this morning. I thought about it and then I quickly tried to not think about it so that I can focus on my match. It’s such a privilege to achieve something alongside Raneem of this magnitude.”

While there was no silver lining finish for Paul Coll, his appearance here tonight makes him the first Kiwi man since Ross Norman in 1986 to play in a World Championships final.

“I’m very proud to put New Zealand on the world stage. It’s a real privilege for me and thanks to everyone who has been supporting me. My family has been waking up at 3am on the other side of the world, so I’m really appreciative of that. Thanks to everyone in New Zealand and all over the world for their love and support this week,” Paul said in the post-match press conference.