Time for Azan to learn some lessons

Alex Wan February 19, 2015 3 Comments on Time for Azan to learn some lessons 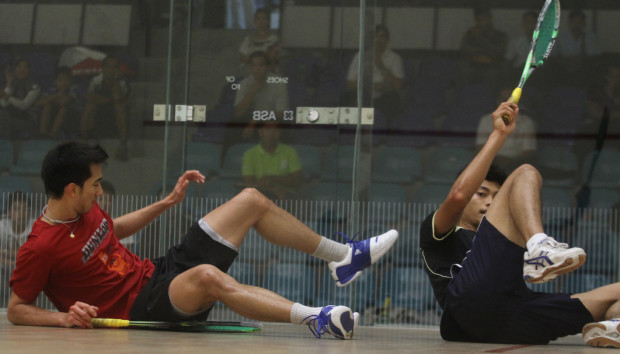 Muhd Asyraf Azan may only have just been slapped with a three-month ban and a fine by the PSA, but he is certainly no newcomer when it comes to bad behaviour on and off court. In fact, he should consider himself very lucky to only finally be reprimanded now.

Right from his junior days, Asyraf has always been well known for the wrong reasons. Despite his antics since young, he has been very lucky that many people have tried and spent a lot of effort to rehabilitate him, none of which have been successful.

The sad thing is, Asyraf has amazingly talented hands and has long been known for his crosscourt drops and nicks, way before Ramy Ashour even became famous for them.

Some have likened him to Jonathan Power in the past in terms of racket skills. But when it comes to behaviour sand theatrics on court, he makes Power, even if combined with the great John McEnroe, look like child’s play in comparison.

At the last World Championships, he had lost a first round encounter to fellow disciplinary recipient, Mohamed El Shorbagy. If anyone had watched the match, one would be able to tell right from the start, he was never into trying to beat the world number one, but instead, getting into his opponent’s head was the primary target.

In 2014, his bad behaviour pretty much cost him his place in the Commonwealth Games and Asian Games, when the Squash Rackets Association of Malaysia slapped him with a six-month suspension for unsportsmanlike conduct for refusing to shake hands with India’s Mahesh Mangaokar after his loss at the 2013 Men’s World Team Championship. The incident also subsequently led to him being kicked out of the national team.

In the same year, he also aided his unpopularity with a string of incidents at the Bluenose Classic. In two successive matches, he had been given a couple of conduct warnings and strokes for excessive contact, conduct and equipment abuse.

Amongst Asyraf’s biggest nemesis in his career are fellow Malaysians Ivan Yuen and Kamran Khan. Matches involving them have never failed to produce a torrid time for the referees and the audience.

At the 2011 Malaysian Nationals, he spent more time intimidating Khan than trying to actually play the ball. Then in 2009 at the Indian Challenger where he played Yuen, he was penalised with conduct strokes for dissent and verbal abuse using a 4-letter word.

Having witnessed him since his junior days and, after the many incidents that have happened through the years, it just seems that Asyraf is never interested in playing a decent game of squash. His preference to self-destruct on court has been a permanent feature in his game plan.

At a time where we are doing all that we can to improve the game, with a view for Olympic inclusion, players such as Asyraf do nothing but harm to the cause.

Chris Brodie, the general manager of Squash Rackets Association of Malaysia said he hopes Asyraf will use the time to reflect his actions. A former colleague in the national team said on social media that nothing has changed for the past 10 years.

I have inclination to the latter.

A leopard doesn’t change its spots.