Alex Wan November 8, 2019 No Comments on Historic double for Qatar as Tamimi and Amjad make second round of World Championships

History was made today at the Khalifa Tennis and Squash Centre when two Qataris made it into the second round of the 2019 Men’s World Championships held here in Doha, Qatar. Top player Abdulla Al Tamimi finally buried his demons of the centre court here when he overturned the seedings to topple Frenchman Gregoire Marche.

Abdulla, looking visibly leaner compared to a year ago, gave the home crowd in the gallery much to cheer for today as her masterfully took out the world number 14 in four games. Having been struggling to play well on his home court for years, this certainly lifts a lot of pressure off the shoulders of the world number 47.

“I’m really happy to have finally won a big match here. It’s great to do it here on the biggest stage – the World Championships. I could see the happiness in my dad and friends’ eyes just now and I am just happy I am able to play well today to make everyone proud.

My goal from here on is obviously to just do well again in the next round. I’m going to try and play well like I did again today”, said a beaming Abdullah.

The win sets him up against another Frenchman tomorrow after Matthieu Castagnet won against Canada’s Shawn Delierre. 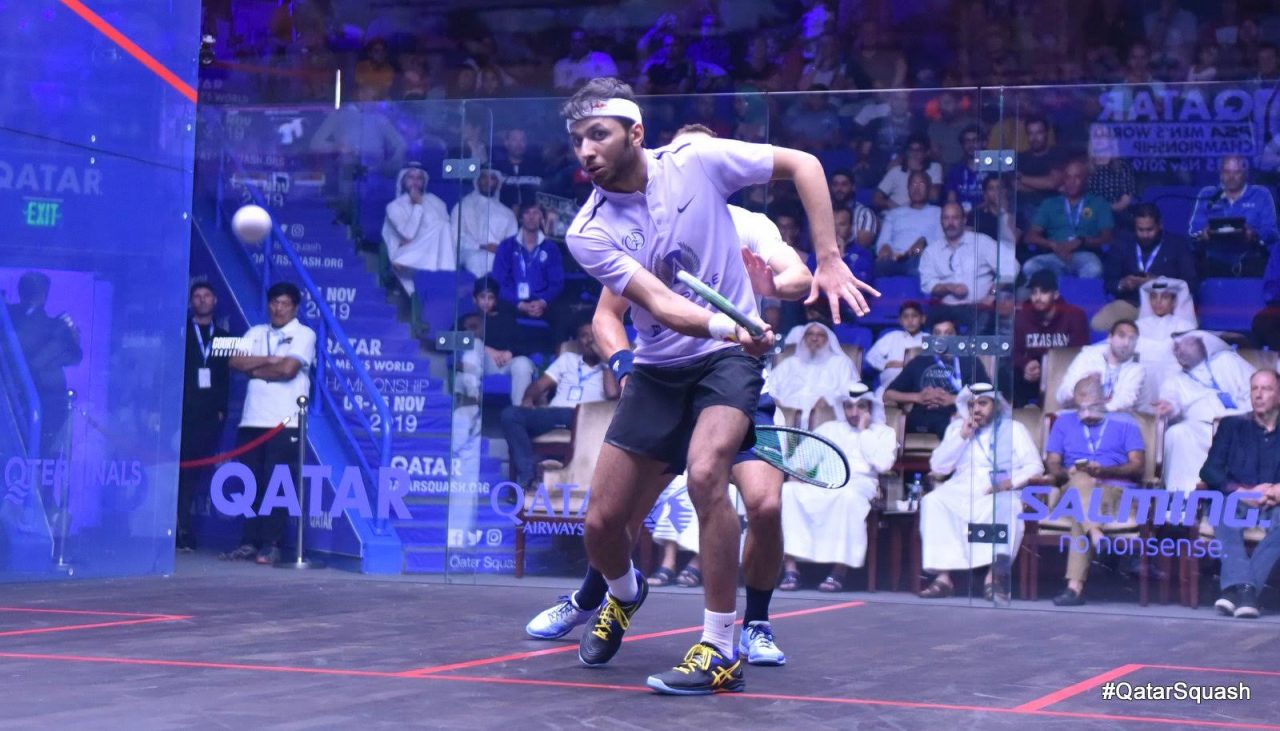 There was further cause for celebration for the host as local wild card Syed Azlan Amjad also made it to the next round after Iker Pajares was forced to concede the match for opponent inflicted injury. In a fit of frustration, the Spaniard had hit the ball directly into Syed Azlan, who was not able to continue after that.

The top four seeds all won today, led by in-form third seed Karim Abdel Gawad, who showed no signs of his famous slow starts in disposing France’s Auguste Dussourd who qualified by merit of winning the Aspin Cup in Canada, in straight games. 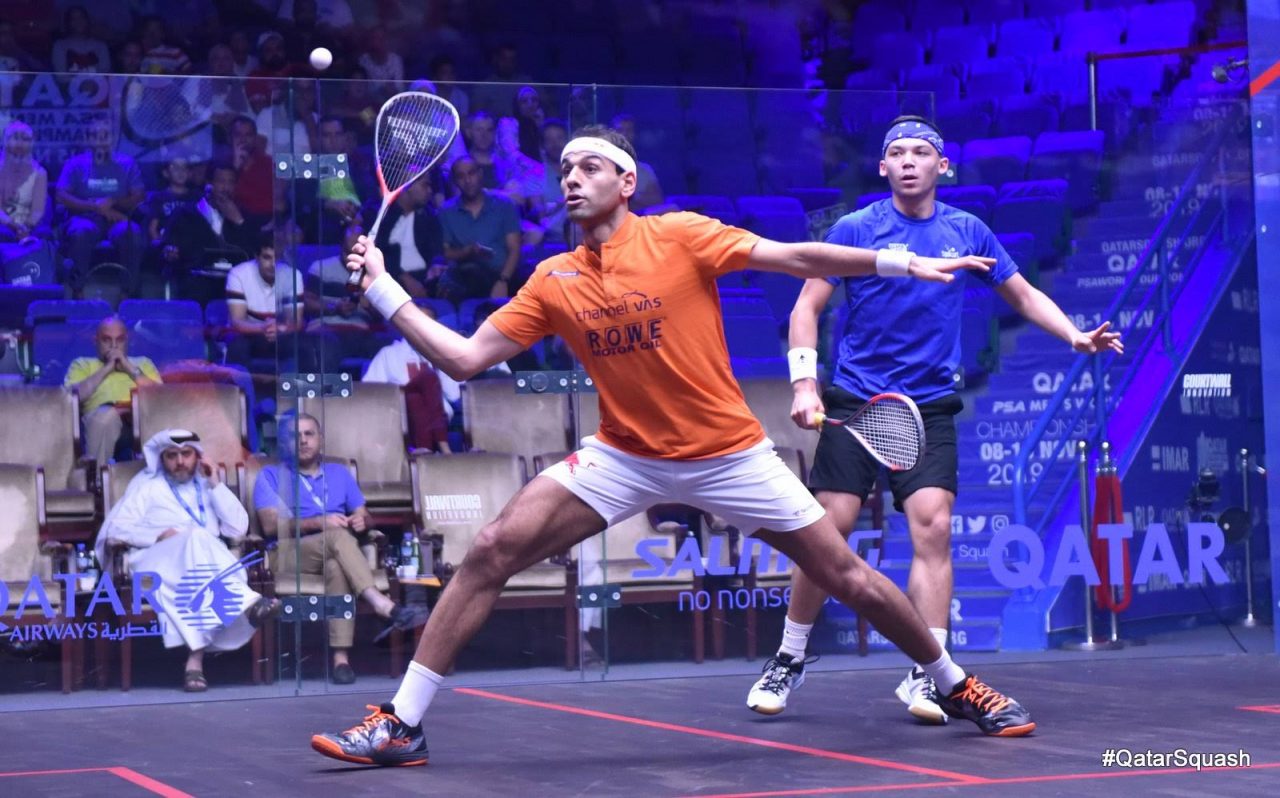 “I actually think Victor is a very good player. I watched him play the World Junior final previously and he was the one who impressed me the most there. If you look in his eyes, you’ll see how hungry he is. He wants it very much, he wants to be there you know. I also watched his match in Egypt last week. When I knew I was going to play him, I needed to watch him more because I’ve never played him.

“I’m very happy to see him play the way he play. He reminds me a lot of (Thierry) Lincou. The way he moves and the way he strikes the ball. It’s good because Lincou was such a classy player and it’s good for France to have someone like that”, Mohamed said of his young opponent.

However, it wasn’t as breezy for second seed Tarek Momen, who had a tough opponent in Germany’s Raphael Kandra. The German number two, who was ranked 13th in March this year was toe-to-toe with Tarek in the first two games, split between the pair in similar 12-10 score lines. But Tarek upped the tempo in the third and fourth to win more comfortably and book his place in the second round. 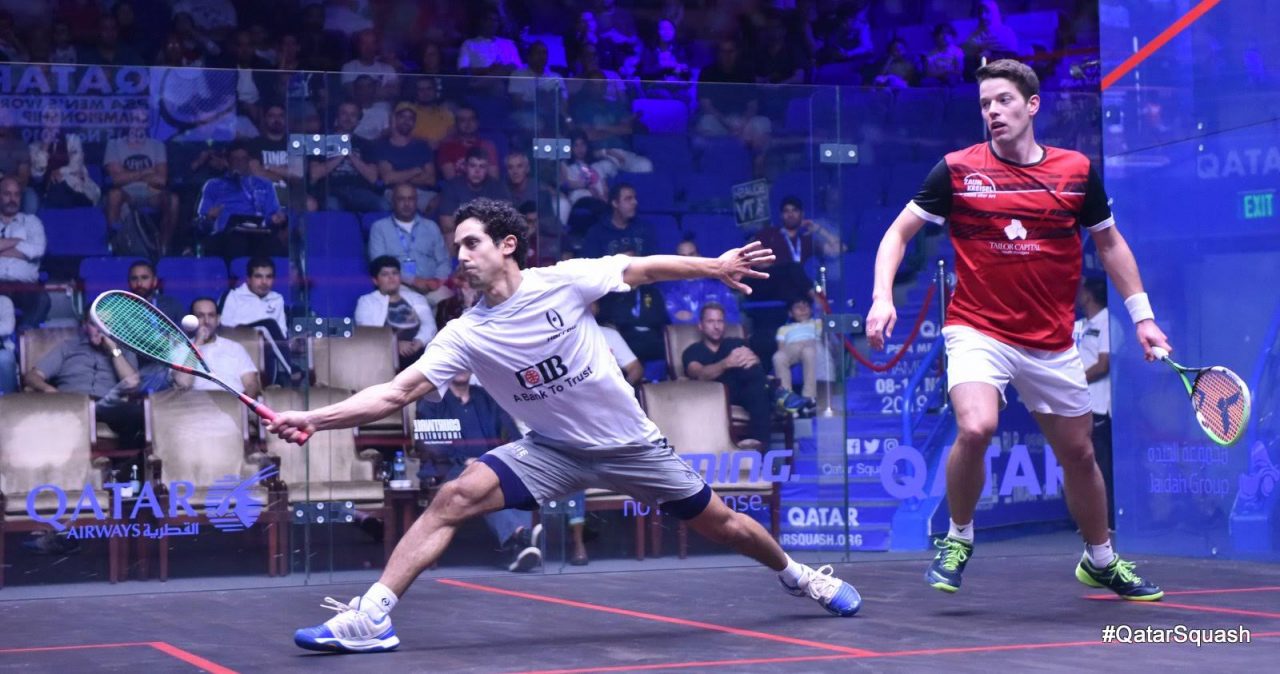 “I am relieved! It’s really tough to play someone like Raphael’s calibre in the round of 64 at the World Champs! But I tried to look at it from a positive perspective because getting past these (difficult) matches tend to put me in a good shape. They will definitely sharpen me for the next match and hopefully I will play better every day”, Tarek said of his tough first encounter today.

One of the four PSA invitees, Ryosei Kobayashi, made history today by becoming the first Japanese man to play in the main draw of the World Championships. The younger brother of now retired Misaki Kobayashi, showed true grit in his match against Scotland’s Alan Clyne and had the Scot on the ropes for most of the match.

Ryosei had his chances to take the first game but it was the more experienced Alan who played the big points better to sneak it in 12-10 before winning comfortably 11-5 in the second. Just as everyone thought the Japanese was done, he bounced back to take the third 11-7, before bowing out in a close fourth game.

“It’s obviously a completely different kind of atmosphere and hospitality (compared to the ones I’m used to) playing in these kind of tournaments. It’s a great experience for me and even though it was only one match, I enjoyed every minute of it.

“It’s a better than average performance and I think I am happy with myself. It was very close in two of the games and I think if I had a little bit more luck, the result could’ve been different. A little bit disappointed with how those two ended, but overall happy with how I played”, said Ryosei Kobayashi. 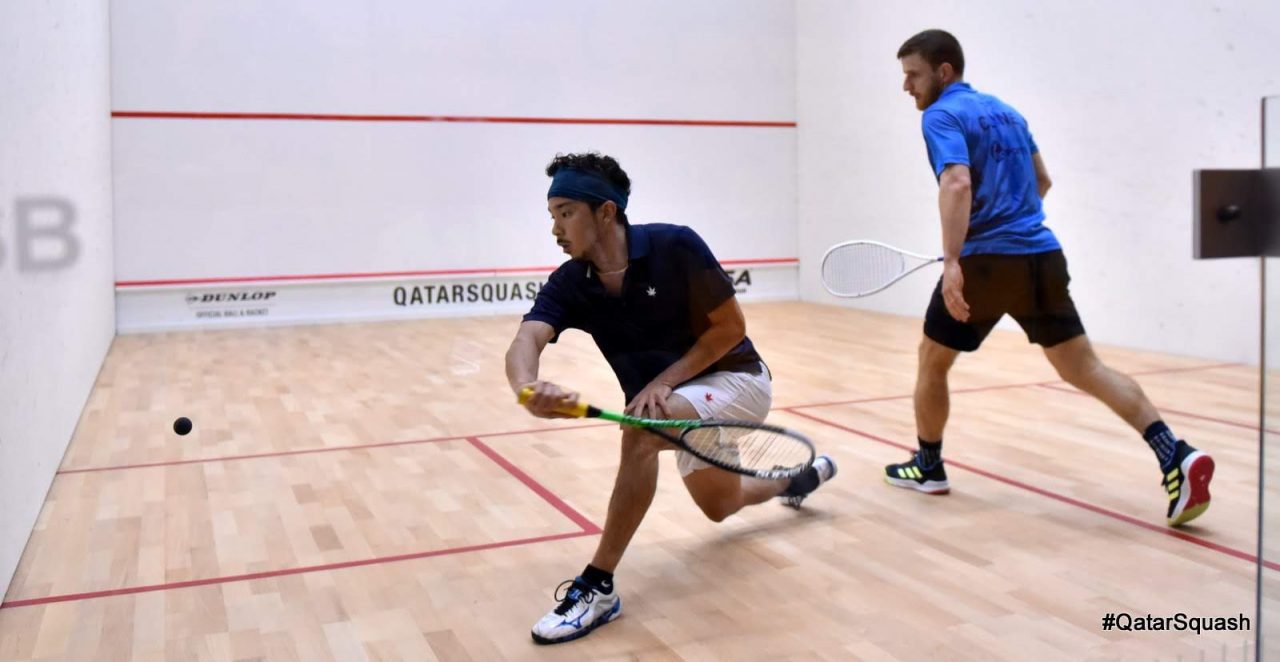 There were mixed fortunes for the English camp, with James Willstrop and Adrian Waller winning all-English battles against George Parker and Chris Simpson. Declan James also won but not before being coming back from two-down against Indian Vikram Malhotra.

Daryl Selby as he was ousted by After games were split 2-a piece, there was a dramatic end to the fifth game. Daryl had leaned onto Youssef to ask for a let which led to the Egyptian losing his footing and needing a 15-minute injury break at 9-9. When the match resumed and with Youssef still visibly limping, Daryl failed to retrieve a drop shot and then hit a boast into the tin.

The other English casualties are Ben Coleman, Nathan Lake, Richie Fallows and Tom Richards. Apart from Ben who took a game off Simon Roesner, all others went out in straight games.

There was no joy for the Malaysian camp as both Ng Eain Yow and Ivan Yuen were both shown the exit by their more illustrious opponents. Despite putting up good performances today, the Malaysians were forced to submit to the superiority of their opponents. Fares Dessouky was stretched to four games by Eain Yow while Diego Elias won in three close games against Ivan. 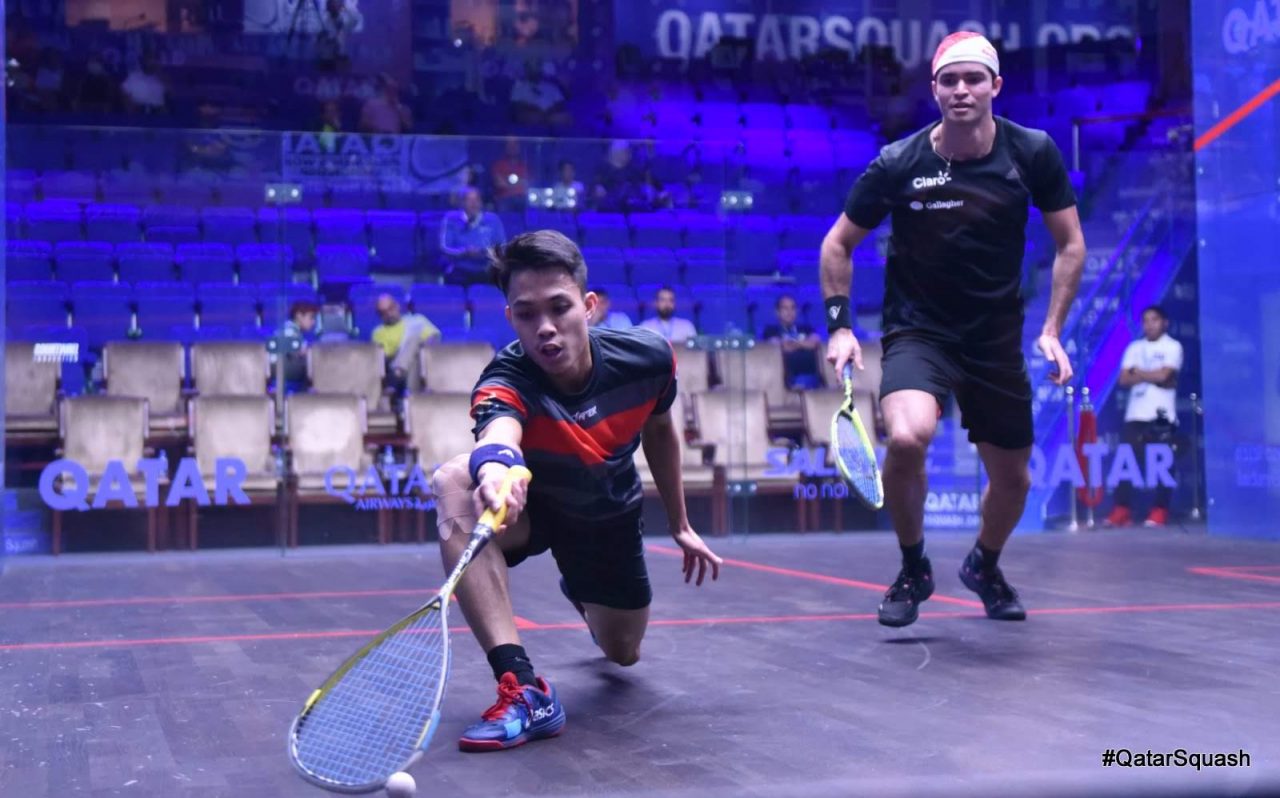 “I’ve never played Ivan before so I really didn’t know what to expect. It was a little hard but I felt good in court and am happy with the way I played.

“I think I always play well here and I’ve been working very hard to prepare for this. So, I hope I will win a couple more of these tough matches and do well here again”, said Diego, who took out top seed Mohamed Elshorbagy at the Qatar Classic here last year.

After a long opening day which saw all 32 matches being played over four courts, tomorrow sees only the top half of the round of 32 being played on the all glass court.