Stars from yesteryear join together to support the biggest junior event worldwide
RICHARD MILLMAN reports from the Black Knight US Junior Open, presented by Ashaway Strings

BEAUTY, as the old saying goes, is in the eye of the beholder. Thus, depending on how broad your perspective of world squash is and/or where you have spent most of your time, you will either be very impressed by some, all or I suppose conceivably none of the names that I ran into today.

One of the great things about the internet and in the particular case of squash, the improved communication that news sites like Squash Mad have fostered, is a growing appreciation of just how many powerful centers of squash that there are in the modern world. 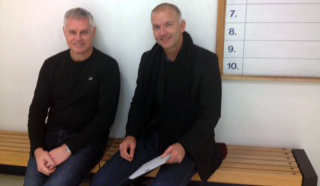 The Two Rodneys: World champions Rodney Martin and Rodney Eyles were in attendance at the US Junior Open

Before I had been there for an hour, I had bumped into Bill Doyle, Paul Assaiante, Chrissie Brownell, Dale Walker and Mark and Julee Devoy. Now if those names don’t mean anything to you then you probably don’t know much about US Squash. That list is a sampling of giants. People that have contributed to the sport of squash and the people of squash at as high-a-level as is possible.

If you don’t know their names it’s largely because the people they have coached and have taught extraordinary life lessons to have not continued into the world as professional squash players, but have gone on to be extraordinary individuals in their chosen fields.

Chances are that if someone has put a lot of money into a professional tournament near you, they were either taught by or are well known by someone that was taught by a member of that eminent group.

So why are these guys so important? Well, they and the Universities they represent are the primers of the pump that drives squash in the United States. They are the very reason that the Black Knight US Open, presented by Ashaway Strings is, at just under 900 entrants, the biggest junior squash event in the world.

So, I hear you saying, if these colleges and coaches are so good, why isn’t the US at the top of the world rankings?

There are many answers to that question. One is peer pressure and financial expectations. Another is the current College system that focuses on academics alongside sport with heavy emphasis on team matches rather than individual training and competition.

So, as much as we would all like to see more great US players, it is wise to pause every once and a while and ask ourselves – where would we be without Doyle and Assaiante, Walker and Brownell and the Devoys?

This much I can tell you, there is at least as much junior talent in the United States as anywhere else in the world and if that talent was ever allowed or ever decided, en masse, to train, play and compete for the same number of hours per week as players from countries such as England, Egypt, France, Australia, New Zealand etc, then I firmly believe that the world’s top ranks would be inundated with the Stars and Stripes. 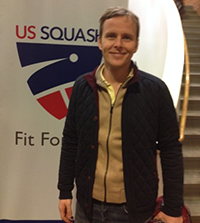 Instead US and many Canadian players disappear into the college ranks where an incredible faculty of mentors, some of whose names I have just mentioned, grooms them to become in many cases even more incredible members of society.

And often, those ex-US college players are the people that are behind the funding of our sport. So, as much as we would all like to see more great US players, it is wise to pause every once and a while and ask ourselves – where would we be without Doyle and Assaiante, Walker and Brownell and the Devoys?

As further evidence, despite the fact that we have not gained the heights of Olympus as a sport yet, New Haven on Saturday saw such an array of both mature and youthful talent as has rarely been seen in our game.

The US college coaching giants I have mentioned, but as my day continued – both at Yale and at the beautiful facility of nearby private school Choate Rosemary Hall and its lovely 10 court facility – I ran into a virtual litany of international squash stars. 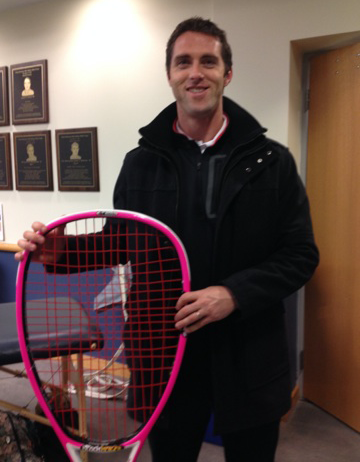 Hisham Ashour, Paul Johnson – for once not behind the microphone, David Palmer (pictured right)- now a sponsor through his US ownership of Black Knight, Sharon Brady busy with students, two time Pakistan (Sindh Open) Champion Kumail Mehmood, Bill Lane – one of the stalwarts of the US club seen with his Aussie wife Julie Harris, Mike Jeffries – South African transplant and then a pair of World Champions no less – Rodney Martin and Rodney Eyles! And then not two minutes later Peter Nicol (pictured above)!

For the love of Mike! You couldn’t swing a cat without bumping into a world number one. They were ten-a-penny today. And why? Because this is the strongest junior squash community in the world. Not just financially – which it is – but in terms of sheer numbers of athletes.

And because of this the world has come to play. To play and to be seen. For without doubt this is the finest shop window for junior squash in the world.

Play well here and who knows, perhaps Julee Devoy might give you her number, or Paul Assaiante might ask you what you are doing next summer and while the purists among us might bemoan the loss of a talented player to the world rankings, with most first year graduates from Ivy League and other first class US colleges able to command a six figure salary and with almost no-one outside the world’s top 10 players being able to make that sort of money in their whole playing careers, what would you do

Especially as by the time Paul Assaiante or Chrissie Brownell have finished with you, you have a passion for the game that will never leave you and you will probably put more money into the game than most professionals ever take out.

Unfortunately the hot talent from twenty-four nations as far a field as Japan and Sweden, New Zealand and Canada, India and Brazil, weren’t warm enough to stop a Connecticut snowstorm and so the US Open ground to a halt today – suspended until sometime tomorrow – whenever it is deemed safe to venture out of the hotels onto the roads.

Many matches were played however and you can see the full results here.