Low Wee Wern and Ivan Yuen both celebrated their fourth Malaysian national titles last weekend. The event was at risk of being cut short, as a second wave of COVID-19 infections swept across the nation. The final was played on the evening before all sporting events were instructed to be called off or postponed.

Despite the strict controls for events in Malaysia, in must be commended that the team at the Squash Rackets Association of Malaysia, did a great job to ensure the event was a success. What’s more remarkable is that the event is a first for the new management committee that was elected into office just weeks ago.

Ivan, the 30-year old from Selangor, also made it to the record books by being the first man to win it four consecutive times, one over his former coach and world number 7 Ong Beng Hee, who won from 2012-2015.

Wee Wern, meanwhile, is still in second spot in most titles won behind Malaysia’s first ever national champion Anna Kronenberg, who is still a familiar face in the crowds each time a PSA event is held in Malaysia. Anna won in 1974, 1976, 1979, 1981 and 1982. 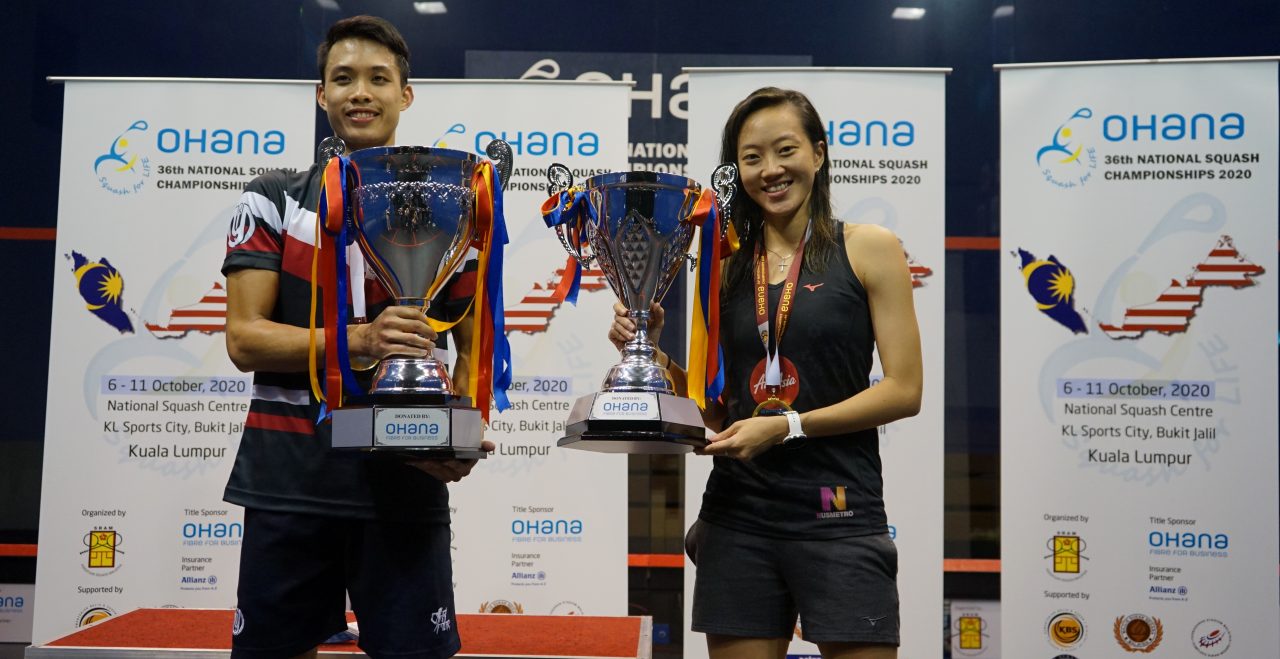 Wee Wern comes from behind to win

Victory certainly did not come easy for Wee Wern, the former world number five, who survived the barrage of attacks from two attacking players in her last two rounds.

In the last four, Wee Wern had Rachel Arnold, the losing finalist last year, for company. Rachel had looked particularly impressive in her earlier rounds as she easily dispatched her opponents in straight games. In their semi-final match, the first two games were split between them before Wee Wern edged home the decisive third game for the lead before walking away with the fourth.

In the final, Cornell-based Sivasangari Subramaniam, definitely did not disappoint as she stretched Wee Wern to the limit. She came in firing and was rewarded with an impressive 11-3 first game.

Wee Wern then slowly weathered the storm to take the next two games for the overall lead, before Sivasangari came back firing once again in the fourth to win in a similar score line to the first game.

Sivasangari continued with her rampage of attacks in the decider and looked well in control for the title as she took a commanding 6-2 lead. But Wee Wern once again managed to turn the tide, limiting the attacking options of her younger compatriot and eventually capped the win after close to an hour on court.

Low Wee Wern, in her familiar forehand pose, prepares to hit a return in her final match against 2018 champion Sivasangari Subramaniam.

When asked about her final, Wee Wern said, “Tactically, I did well to stick to the plan and came back to win!

“Against Sivasangari and even Rachel for the matter, these girls are on 100% attack from the first point, so I had to have a tactical plan against them. Sivasangari came out firing and hitting winners like there is no tomorrow and I really just needed to weather the storm and slow everything down to contain her as much as possible.

“I managed to do that in the second and third. I made a tactical error in the fourth and the start of the fifth that allowed her to play winners from thin air. I knew I had to contain her and again and it was paying off, but it took me from 2-6 down before it actually worked.”

With this being her eighth final, Wee Wern added: “I didn’t realise I have been in eight finals, but I would say being consistently in the top two in Malaysia over the past eight years is a commendable feat.”

While Wee Wern was made to work for the title, Ivan had a relatively easy path to his title. With top ranked compatriot Ng Eain Yow opting out of the event to prepare his travels back to his Bristol camp, Ivan was hardly troubled in his path.

Some had expected some fireworks in his quarter-final match against disgraced former international Muhd Asyraf Azan. The pair, who were both part of the 2007 Malaysian World Junior Championships squad, had a long history of rivalry spanning from their junior days.

However, Ivan was ready for whatever nonsense Asyraf had in mind and kept his cool throughout the contest. With a level-head, Ivan simply focussed on the task in hand and quite simply, humiliated Asyraf for the loss of a mere five points the entire match. 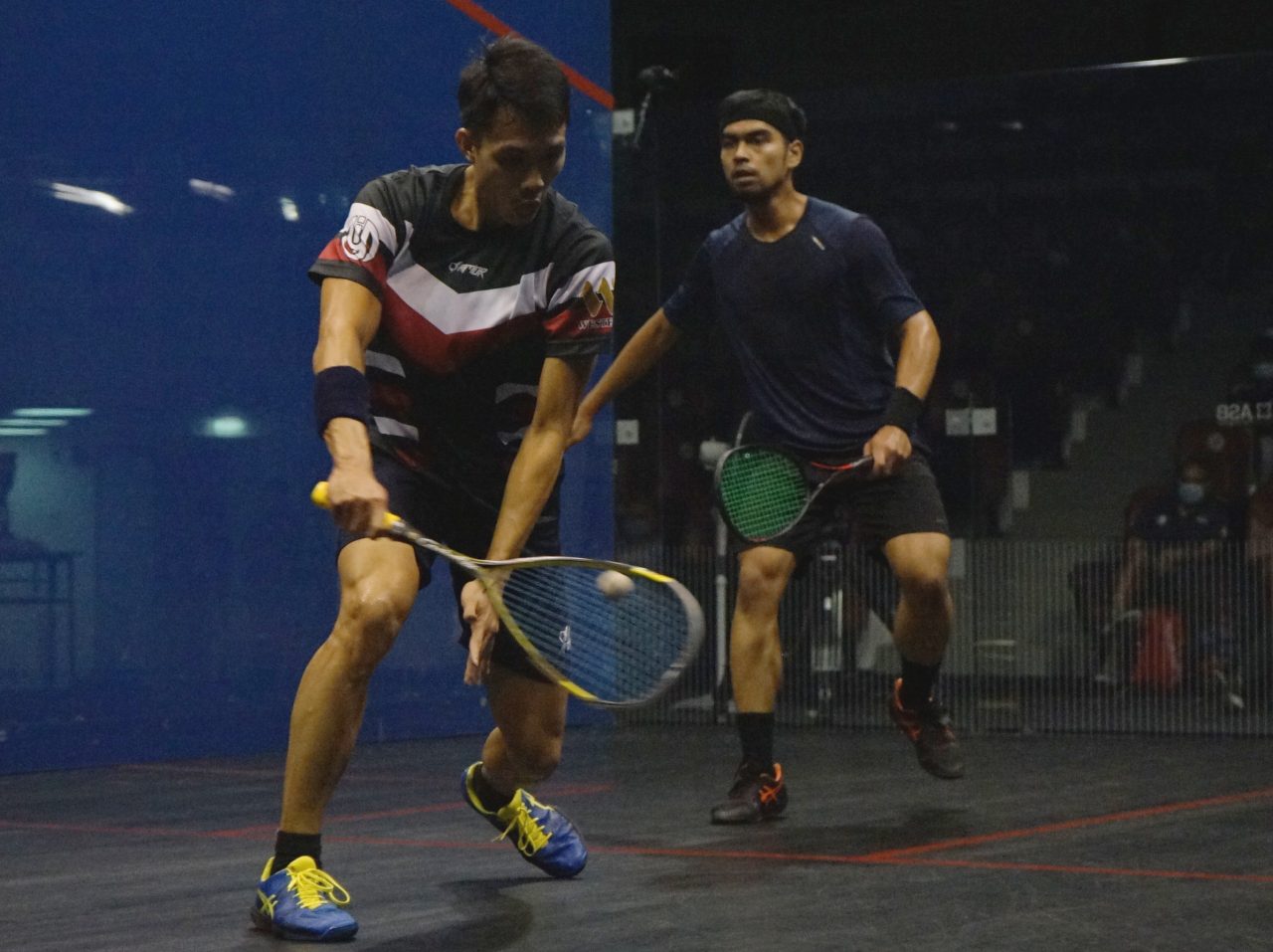 Ivan Yuen hits a backhand return in his straight games victory over second seed Syafiq Kamal in the final.

In the last four, Ivan won against the fast and nippy Addeen Idrakie. After a close first game that went to the tie-break, he took the second easily before slotting home a close third game to book his place in the final.

His opponent was second seed Syafiq Kamal, who had to battle through tough matches in the quarters and semis, against former international Elvinn Keo and the up and coming Darren Pragasam. The lefty managed to give a good account of himself in the final, but Ivan was simply a class above and won also in straight games for a place in the record books.

“It definitely feels great to win my fourth consecutive title. Furthermore, no one has achieved it, so this makes it even more special.

“The process of building up into a competitive mindset after the lockdown was pretty tough. Being in a tournament is just like having a match play (in training), but the only thing that makes a difference is the pressure that comes with it,” Ivan said on having to adapt back to his competitive mindset for the Nationals.

With the country’s second wave of COVID-19 in full swing, it is uncertain when the Malaysians will be able to compete again next. The Squash Rackets Association of Malaysia has planned for some events in November and December, but that looks uncertain given the circumstances.

Perhaps Ivan can spend a little more time on his new venture as the owner of a cosy Thai restaurant (https://www.instagram.com/thaicornerpj/) in his home town of Selangor for now.