Malaysia’s Low Wee Wern achieved her biggest win since coming back from a 20-month injury break here today when she ousted world number 14 and tournament second seed Salma Hany in convincing fashion. The 28-year old from Penang won in straight games in just over the half hour mark to book her spot in the last eight tomorrow against another Egyptian Nadine Shahin.

Playing the last match of the evening, the Malaysian took the all-important first game that went to the tie-break, before taking the next two comfortably. 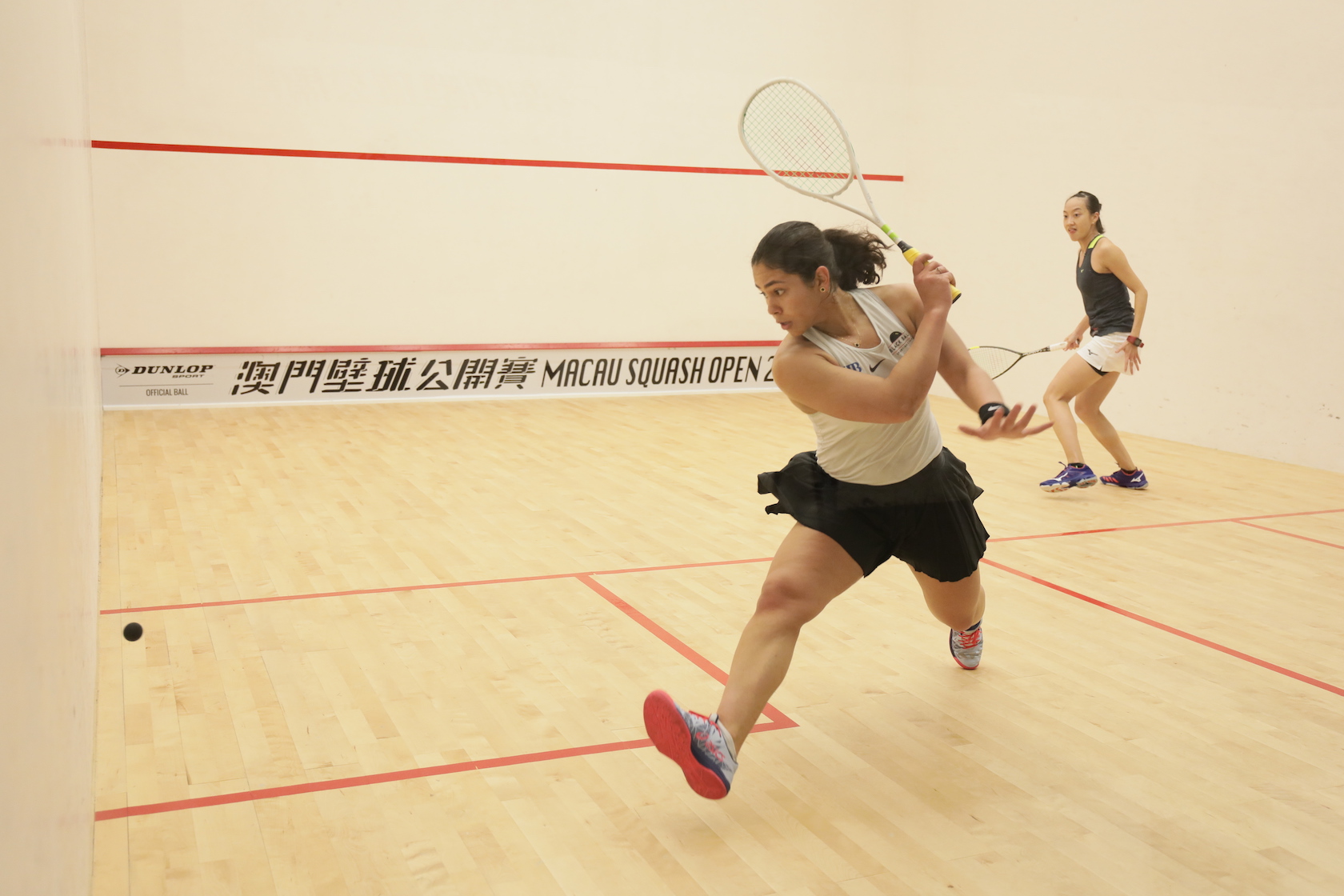 Salma Hany was kept at the back of the court very much today.

“It’s one of my first good wins ever since I started playing after the injury layoff. I’ve been struggling to find my confidence on court after being out for so long. Even yesterday, I was struggling to find my game. But today against Salma, the first game was very, very important and winning that gave me a lot of confidence and I think that also took some confidence from her. She’s a shot maker and going one-down meant it’s harder to try going for them,” Wee Wern said.

It was tough day for the top seeds In the women’s today, as Annie Au was severely tested by the Japanese youngster Satomi Watanabe. Having split the first four games between them, the experience of Au shone when it matters when she ran away with the fifth game, winning 11 points in a row after dropping the first. 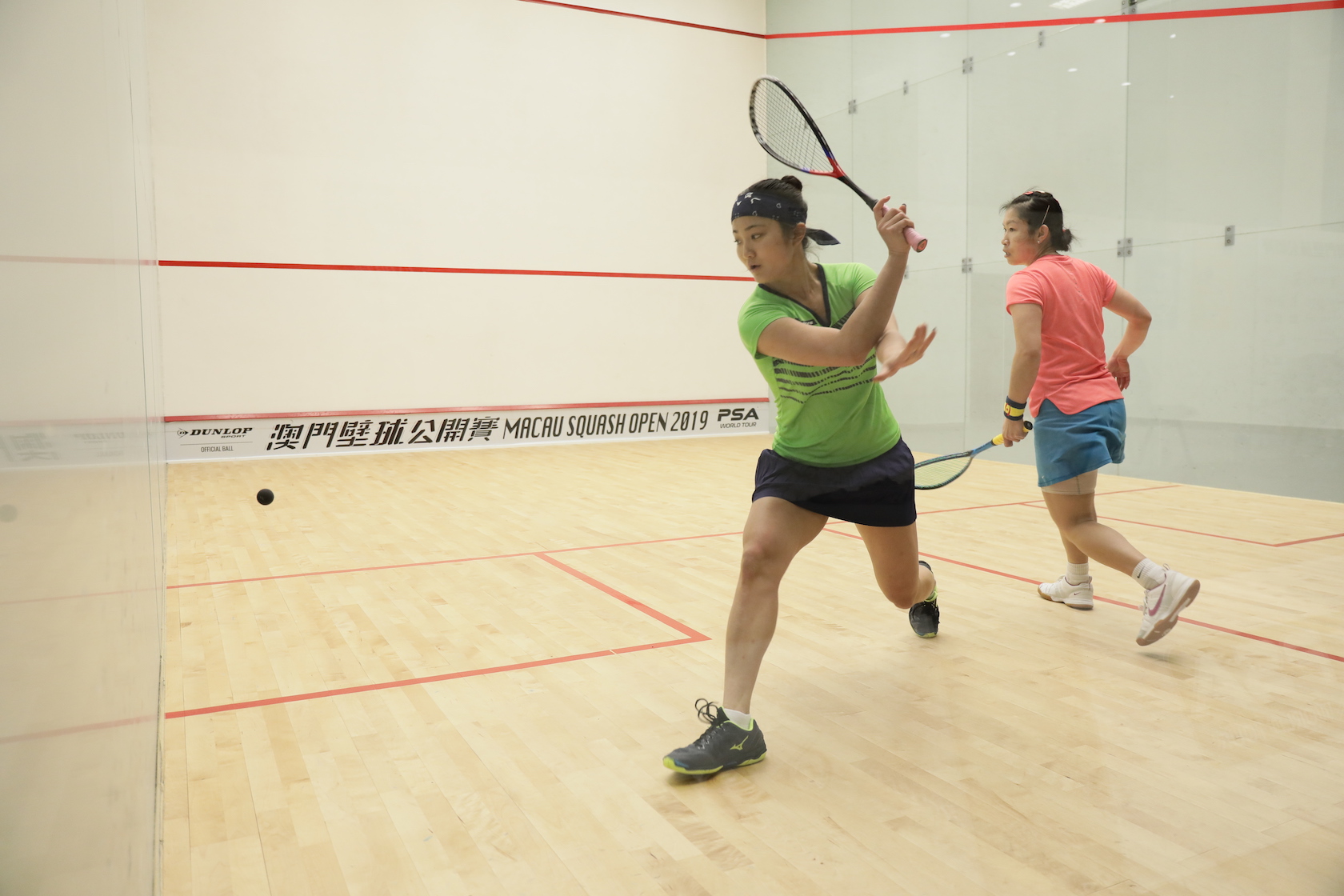 “Maybe I wasn’t as match ready as her. She had a match yesterday and for me, this was my first match. Sometimes, having to play a game extra helps you condition and maybe today was the case for her. Now that I have a long match in the bag, I hope it’ll be a much better game from me tomorrow,” Annie said when asked how she think she fared.

Au’s opponent tomorrow in the last eight is Samantha Cornett, a straight games winner against Hong Kong’s Vanessa Chu. The lanky Canadian nearly blew away a big lead in the second set when she allowed Chu to pull back from 8-4 down to 10-10.

“I felt pretty good today. I feel I could get to the ball quickly, but I let things land a little short in the second, which is where she’s really good,” Cornett said afterwards. 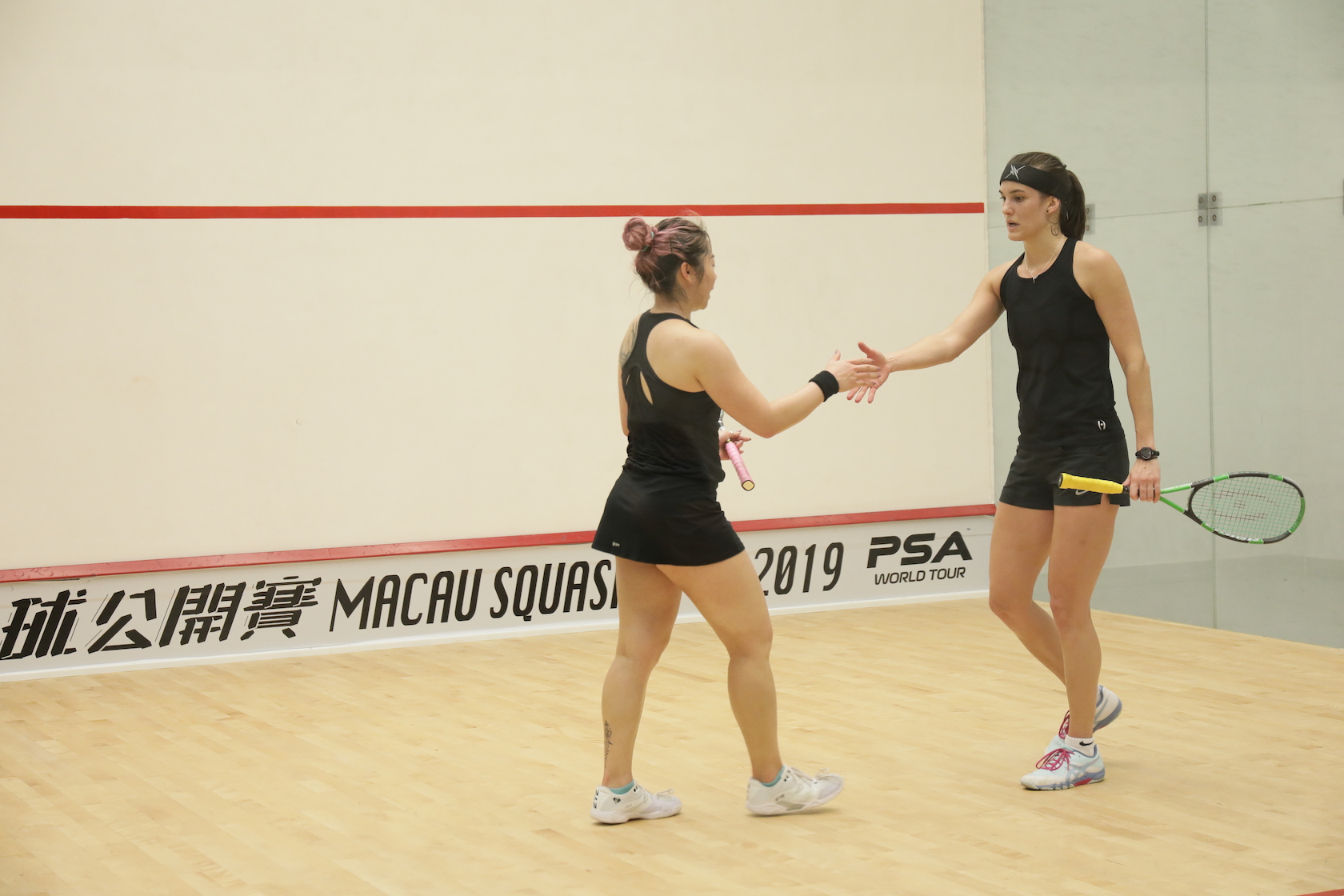 Chu’s counterpart Liu Tsz Ling was also on the losing end as she fell in straight games to Egyptian Mayar Hany. Hany will face third seed Indian Joshna Chinappa tomorrow, after she saw off the challenge of Kiwi Amanda Landers-Murphy.

“Amanda and I train together quite a bit back in Bristol. I know how dangerous she can be on the volleys, so I had to keep that away from her. I’m just glad I got through in three, especially in the first and third, it was close.”

In the lower half of the draw, fourth seed Joey Chan won the all-Hong Kong battle against Tong Tsz-Wing, who did not have many answers to shot making skills of the left hander. Chan faces Egyptian Zeina Mickawy, who ended Rachel Arnold’s Macau campaign in four games.

In the men’s event, last year’s finalists Yip Tsz Fung and Omar Mosaad both won in contrasting fashion. Mosaad, the losing finalist from last year, certainly had the easier time between the two, winning in straight games. But huge credit should be given to his opponent Dimitri Steinmann who pushed the Egyptian into very long rallies in the third game in particular. 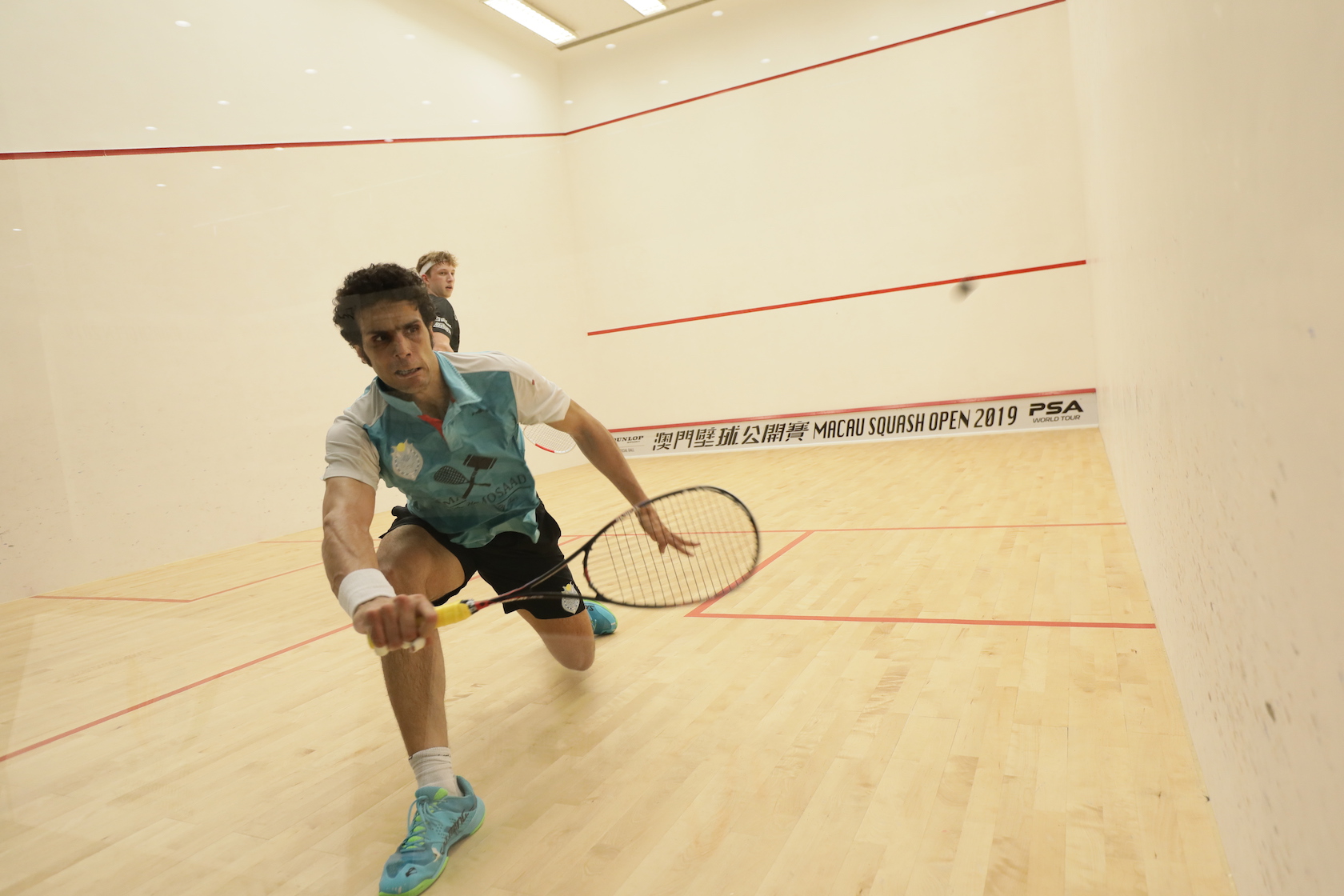 “Dimitri played a good long match yesterday against Mazen Gamal. I knew it was going to be a little hurting for his legs today and I knew he was going to start slow. I wanted to do well in the start and he was going to up the tempo in the second or third game. I’m really happy to win in straight games today.”

Defending champion Yip Tsz Fung was severely tested by Pakistani Shahajad Khan. Both players have tremendous racket skills and served the crowd a delight with the many low cross court shots. While there were many moments of brilliance, the match was marred by several interruptions with the referee.

The fourth game was not a pretty one with both players growing more and more frustrated by the inconsistent calls. There were many traffic issues and discussions with the referee. Then at 4-8 down, the cool and composed Yip gathered all his experience to win seven points in a row from 4-8 down to book his berth in the next round and a step closer to retaining his title.

Fellow Hong Kong player Leo Au was also tested by France’s Auguste Dussourd. The Asian Games champion took the entire first game to get used to the playing style of the Frenchman. After dropping the first, he came back strongly to take the next two comfortably. The fourth was close in the first half of the game, but it was Au who walked out victorious to earn a shot against compatriot Yip Tsz Fung.

Max Lee and Ivan Yuen played the match of the day. The pair, who are friends and know each other’s game inside out, both played their best squash and served the crowd a delightful match. Yuen was firing into nicks from all corners while Lee was ever-ready to pick them up. The fourth game in particular, Yuen was super sharp with the angles. It was perhaps because of that, it got to his head a little in the fifth where he rushed to finish off the rallies a little too quickly and was made to pay with the game and match. 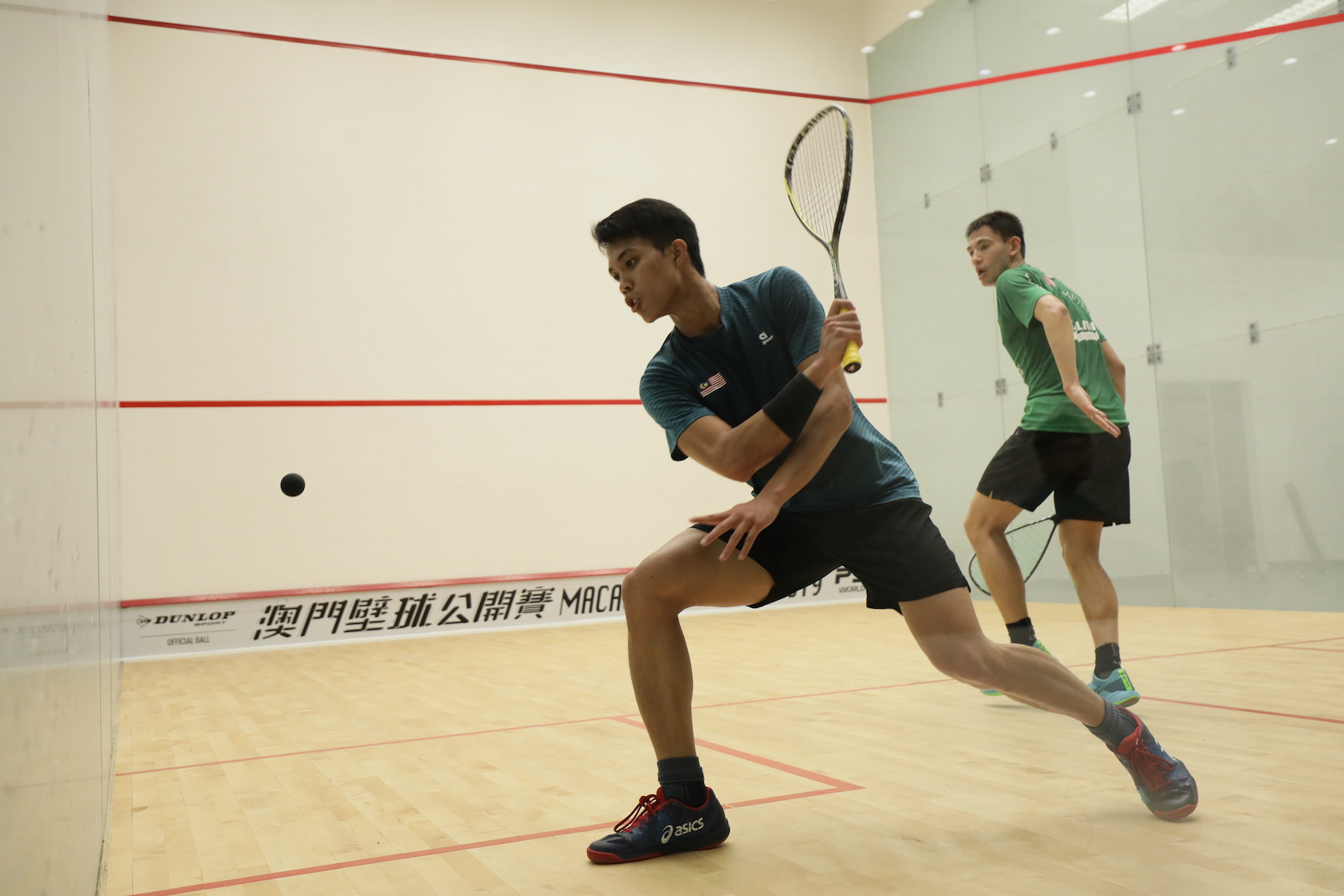 Ivan Yuen (l) was sharp today but Max Lee was ready to pick up what was fired into his direction.

“I didn’t set much expectation on myself today. I just wanted to play a good match. Ivan and I have played many times, so I know exactly how he plays and he knows my game well too. But he seriously hit a lot of winners today and I just had to keep everything tight. It was a little more comfortable in the fifth. Maybe he relaxed a little after that ridiculous fourth game.”

2016 World Junior champion Ng Eain Yow won his first competitive match against senior Nafiizwan Adnan after the pair engaged in a 73-minute battle. Expectedly, the match was a long one given that the pair train together daily. After splitting the first four games, Ng ran away with the fifth with Adnan looking a little worn.

While on paper it’s an upset over the seeding, Ng has overtaken Adnan in the latest PSA ranking despite both having dipped a few places. 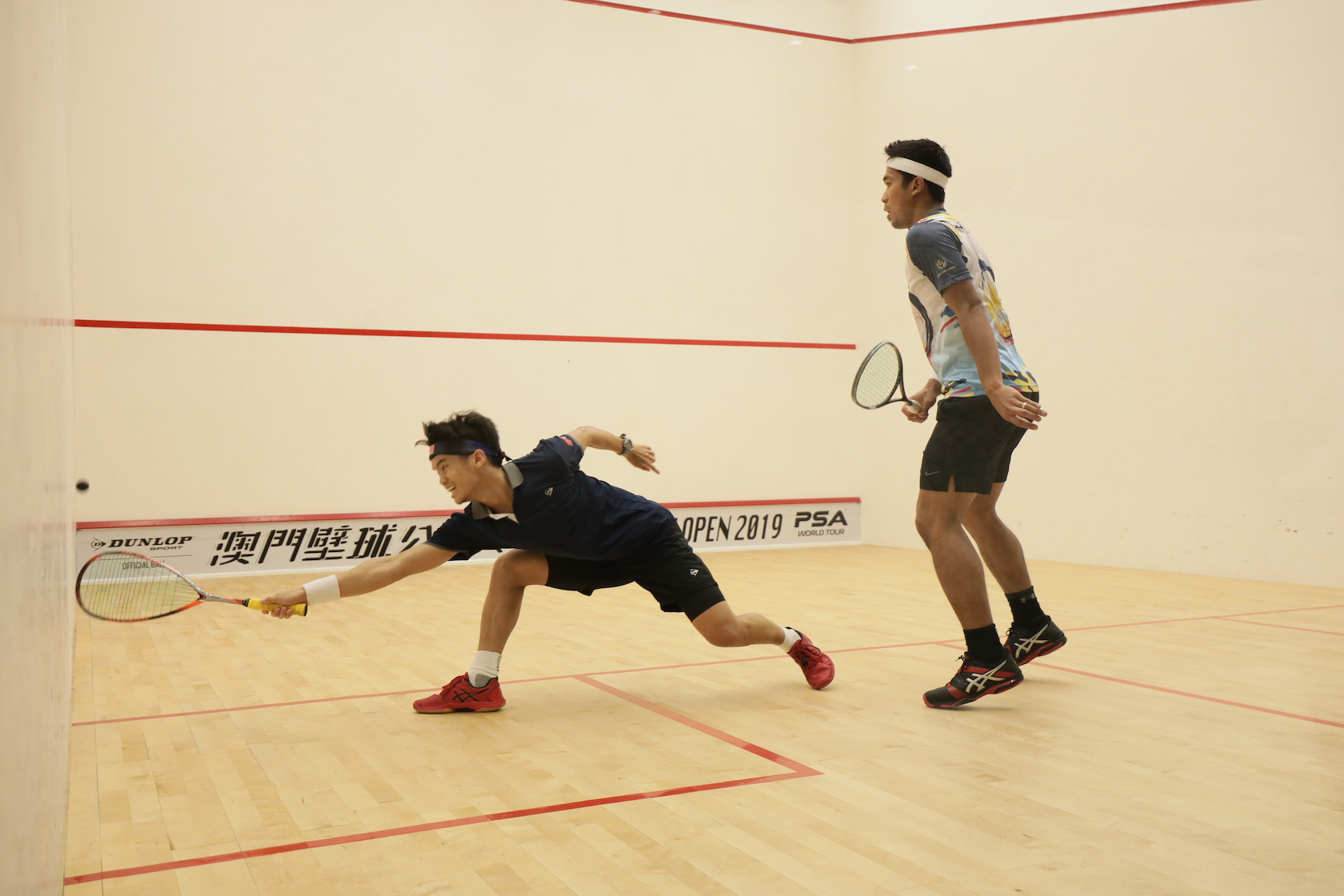 “I thought I played well when I needed to today and I’m just happy to get the win. At this stage, I am not thinking too much about who I’m playing or who I’m beating. It’s just focussing on playing good squash and getting the result when the matches come. Just focussing more on myself now rather than who my opponent is. But it’s never easy playing a team mate, especially with Nafiizwan, who has been helping us as juniors. But I thought we both went in professionally and played a good game,” Ng said later.

“I was a little nervous going into the match because Baptiste has won a couple of 10k events recently and I know how that feels. He’s got lots of confidence so I am glad to get through,” Lobban said afterwards, while Elias was happy with his match:

The last men’s match of the evening was also the longest. The all-Indian battle between Saurav Ghosal and Mahesh Magaonkar lasted a full 77 minutes and it was rather tense through it all. It was evident both players knew each other’s game well, judging from the times they both guessed the right way on many occasions. It was a shame finish for Magaonkar, who was today playing way ahead of his ranking of 67. After he hit a volley drop, which Ghosal responded with a body shot, Magaonkar attempted an in-between his legs lob which flew out of court. After 77 minutes of hard work and so close of a major scalp, he couldn’t hide his frustration and flung his racket into the tin. 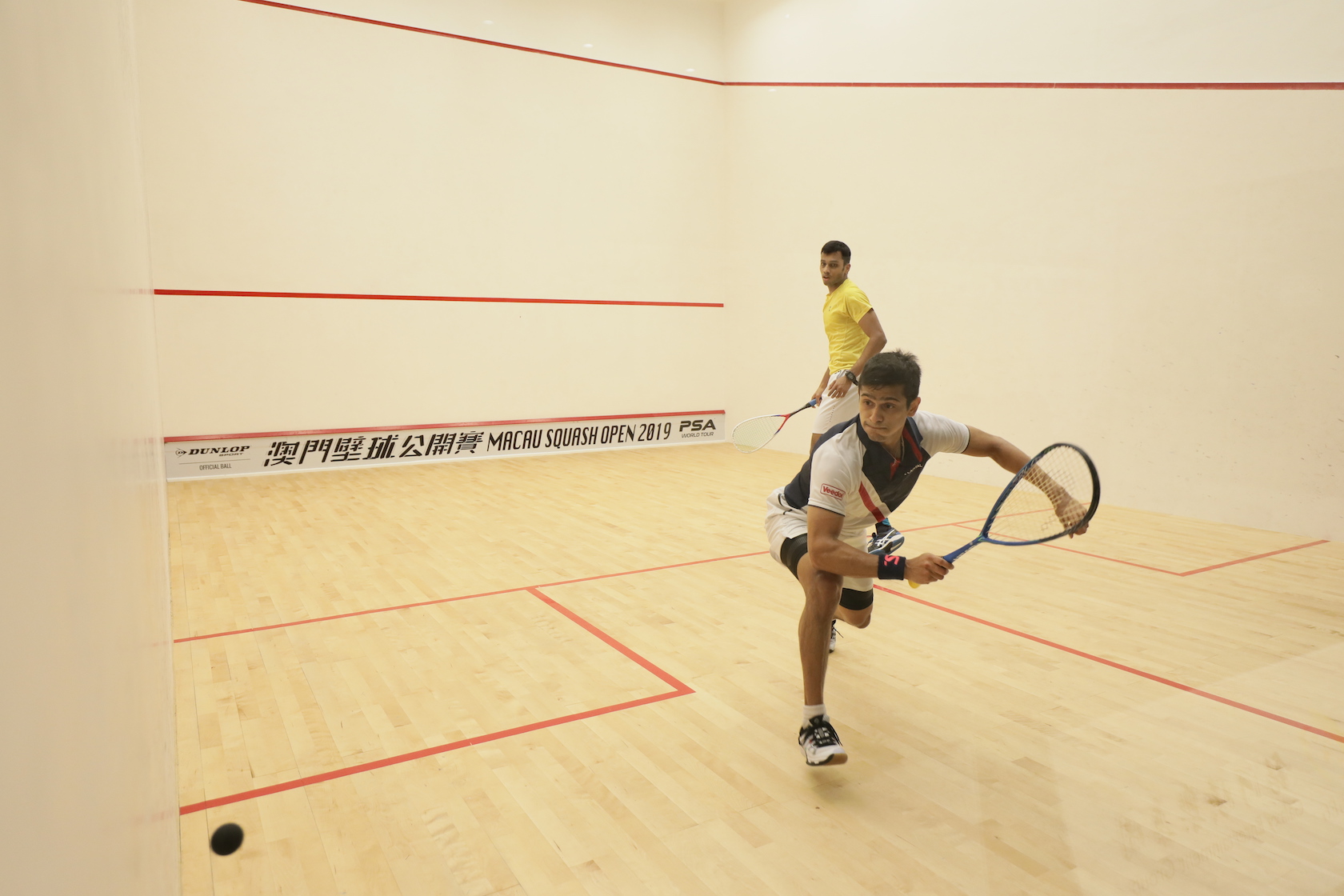 “First thing, I think Mahesh played very well. You have to give credit where credit is due – he did put up a very, very good performance. I know obviously he was very capable of a performance like that. His ranking certainly does not reflect the quality of squash in him.

“Personally, I don’t think I was hitting the ball badly, but maybe my shot selection wasn’t the best at certain times. That could’ve been slightly better in the first half of the match. But I’m happy with myself for being able to come up with solutions to win today.”