Amazing display of accuracy sends Willstrop into the last eight

Alex Wan November 11, 2019 No Comments on Amazing display of accuracy sends Willstrop into the last eight

James Willstrop rolled back the years today as he put up a magnificent display to send third seed and 2016 World Champion Karim Abdel Gawad packing in the last 16 of the 2019 Men’s World Championships. The 36-year old, playing in his 15th World Champs and a runner up himself in 2010, drew on all the years of experience to masterfully craft out the win in what seemed like an impossible task at certain parts of the match.

After taking the opener in 12 minutes, James was completely outplayed in the second. Karim was hitting many boasts to draw James to the front and trying to move him all over the four corners. It was almost painful watching the Yorkshireman keeping up at this game. It was 8-1 and soon enough, 11-4 to the Egyptian to draw level.

Things seemed to have continued into the third game when Karim went to 3-0 up after a series of three consecutive boasts. It was from here that James slowly came back into game as he caught up to draw level 3-3. From here, Karim never got the lead again as James nudged ahead each time he drew level. At 9-8 up, James was denied a let that brought them to 9-a piece. This was followed by a trademark backhand drop from the back, which Karim was unable to scrape out of the side wall and then was gifted a tin from the Egyptian’s racket to go 2-1 up.

It felt almost a different James had come on court in game four, as he played gallantly with a different body language, despite going down 0-3 at the start. He continued to trail and finally went into the lead after a stroke brought him to 9-8 and then match ball up at 10-8. The crowd had now gone into a frenzy screaming for Karim to fight and this he did, first forcing a tin to 10-9 and when he got to 10-10, a huge scream of yalla (come on) was heard.

It was however, James’ day as he regroups and wins the next two points through a no let and then Karim sending a forehand drop into the tin.

“I didn’t know if I was capable of doing it. I’ve been training, I’ve been hitting the ball alright. It’s whether I can cope with these players in a match situation. It’s so different to what I’m doing day-to-day to look after the body. I’ve had a day off and had a nice little rest. That helped me today, to be able to be fresh and push hard, both mentally and physically. It’s really nice to play like that”, James said of how he felt about what he just did.

“I just tried to not worry. Just try to not be mentally down and rely on my experience as I’ve been there. I also knew the first game was nothing to think about because everyone knows of his slow starts. So when I was 8-1 down in the second, I kind of knew this was going to happen and not panic”, James added on the point that he was being outplayed in the second.

In the other tight match of the day, second seed Tarek Momen was involved in an uphill battle against the in-form home darling Abdulla Al Tamimi. After two huge wins in the previous rounds, there was a lot of hope on the local boy, who looked more nervous this evening in comparison to the previous two. His nervousness certainly was confirmed in the first game as he lost it very quickly 11-5 in just 8 minutes.

He came back with a more matured and patient game and was duly rewarded with the second game to draw level. This patient display continued into the third game, and he turned a 4-7 deficit to a 9-7 lead. But a pair of tins allowed Tarek to draw level 9-9, that was quickly cancelled with a pair of beautifully hit backhand volley drops which The Viper was unable to pick. 11-9 to Abdulla, a 2-1 lead and very cheers from the stands. 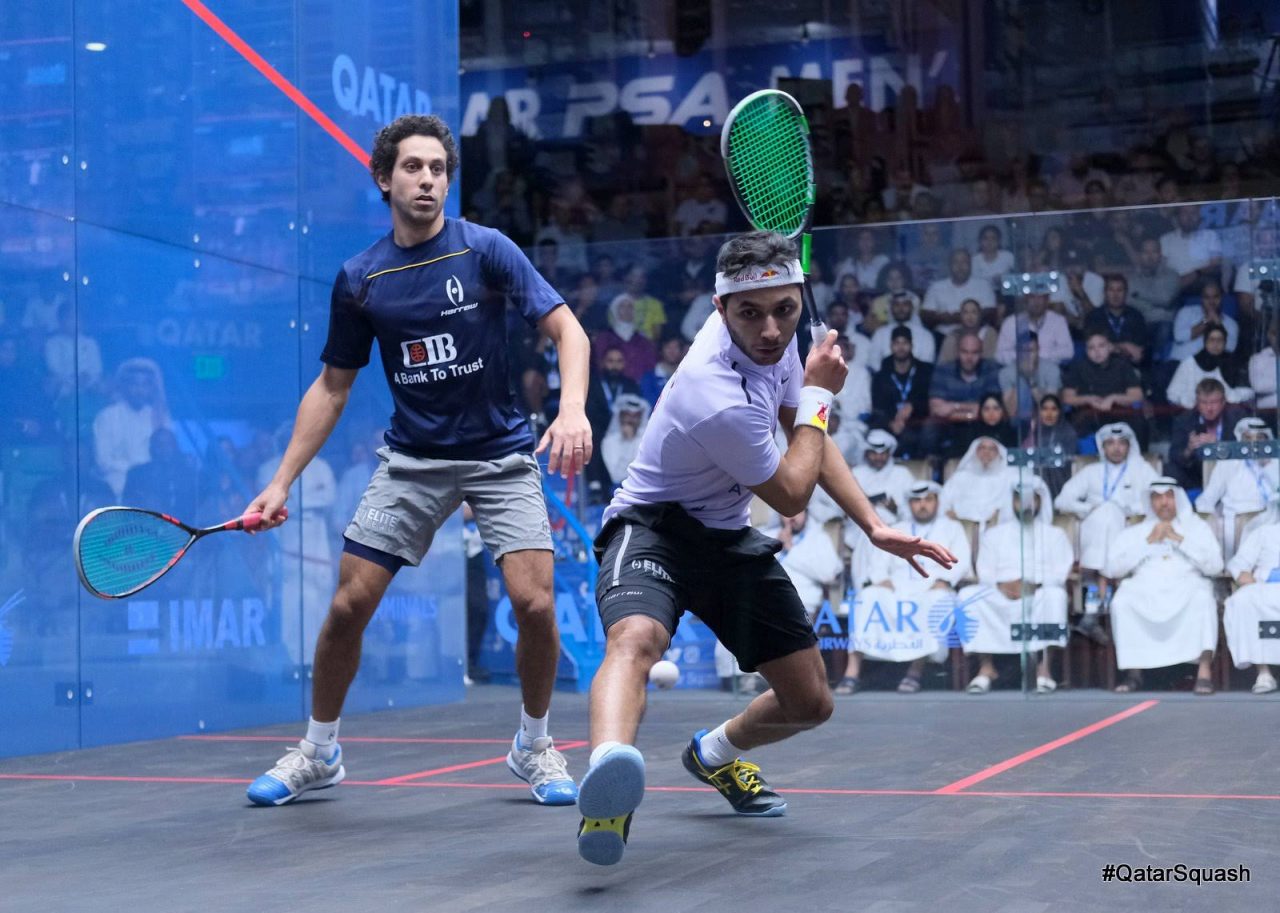 Things were looking very good for the local boy as he surged ahead to 6-3. Having played twice the amount of World Champs than his opponent, Tarek manages to use all the extra experience he has to claw back into the game and at 7-7, a huge rally ensued that ended with Abdulla diving to save a shot at the back of the court unsuccessfully. That gave Tarek the lead 8-7, which was the turning point as he never looked back after that. A tin from Abdulla ended the game at 11-9 and the momentum had shifted.

The fifth game saw an exhausted Abdulla just completely outplayed as he succumbed relatively easily 11-4 and Tarek is into his fourth World Champs quarter final.

“I’m quite happy because, to be honest, that was a very tough match. Halfway through the fourth game at 6-3 down, I thought to myself, OK this is very critical now. I felt like I have no solutions then and I just had to grind it out. So, I’m really happy with the way I fought to come back to win this. Right now, I just have to stop thinking about what happened, recover and prepare for my next tough match against Diego (Elias)”, a relieved Tarek said later.

Having got onto court after Karim Abdel Gawad was ousted by James Willstrop, that must’ve certainly be something playing in the second seed’s mind, to which he confirmed after the match:

“Going into the match, I tried so hard to block this thought out of my mind because it was huge. If not, I’ll keep thinking I hope this doesn’t happen to me”

“The Egyptian crowd evened out all the home supporters and made the whole atmosphere just unbelievable. There was cheering just after every single point – whether it was for Abdulla or for me. So, I think it was very entertaining for everyone”, Tarek commenting if there was additional pressure playing to the home crowd cheering.

While there was no silver lining finish for Abood as he is known locally, Abdulla left the event with many positive and said:

“I’m quite disappointed with today’s result for sure. But overall, it was a good tournament. I had a couple of really good matches and today, I think I played some of my best squash as well to take Tarek to five and have some chances to win the match, especially after a bad start to the first game. It was 8 minutes – he played really well and I was nervous and was not really into the game that much. To back it up and come back in the second, third and have my chances in the fourth game, that was very good for me mentally and I’ll take a lot of the positives from this match. And I’ll look at the negatives and try to improve them for the rest of the season.

“I’ve been working on my patience and tactics and play the way I want to play. Just be more precise with my shots, move the player around and how to be patient, instead of playing those outrageous shots all the time”, added Abdulla on what he had worked on over the year to get here.

Earlier in the afternoon, Simon Rosner chopped himself into the last eight with a master class display against Welsh Joel Makin. Simon, a semi-finalist at the Chicago World Champs earlier this year, came from behind in the first two games to win them 11-8 and 11-8.

The German Tree Chopper was playing with such fluidity and was taking the ball early, not allowing Joel much opportunities to attack. He was so quick onto the ball that many attacks to the front left corner ended up as lets or strokes, which clearly frustrated the Welsh a lot.

In the third game, the long and physical opening rally seemed to have taken out a lot of energy from Joel as he never seemed to have recovered. A one-sided affair all the way in the fifth as the German romped home 11-5 to win in 47 minutes. 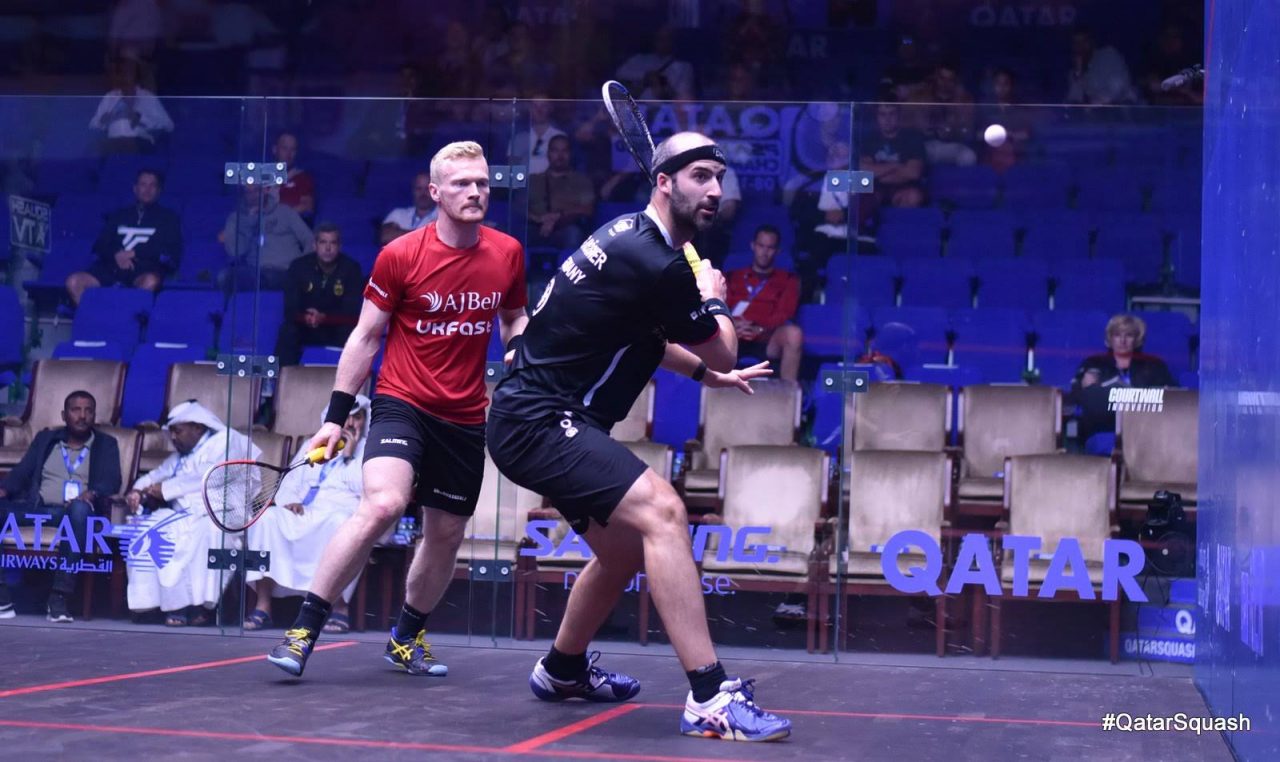 The German Tree Chopper chopping his way through

“Having not had the best two weeks, it’s very, very good to get a win against someone who’s in-form like Joel, (him) having beaten Tarek (Momen) last week. It’s a big, big confidence boost for me and I need to take that kind of form into the next rounds.

“I was being more aggressive today, pushing myself forward and taking the ball much earlier. I saw him struggle a little physically in the start of the third game and not being as fast as he usually is. That gave me like a mental edge to push harder”, Simon said when asked how differently did he play today compared to the previous round.

Simon’s opponent in the quarter-final will be Diego Elias, who defeated Egyptian Fares Dessouky. While there were plenty of predictions and expectations of a fiery and physical encounter, this did not materialise as the pair played a fair and respectable match.

It was, however, Diego’s good day as he was just too good for the 25-year old Egyptian. After a rather nervous first game, there wasn’t much the Peruvian did wrong in the next three games, as he wrapped up the match just shy of the hour. 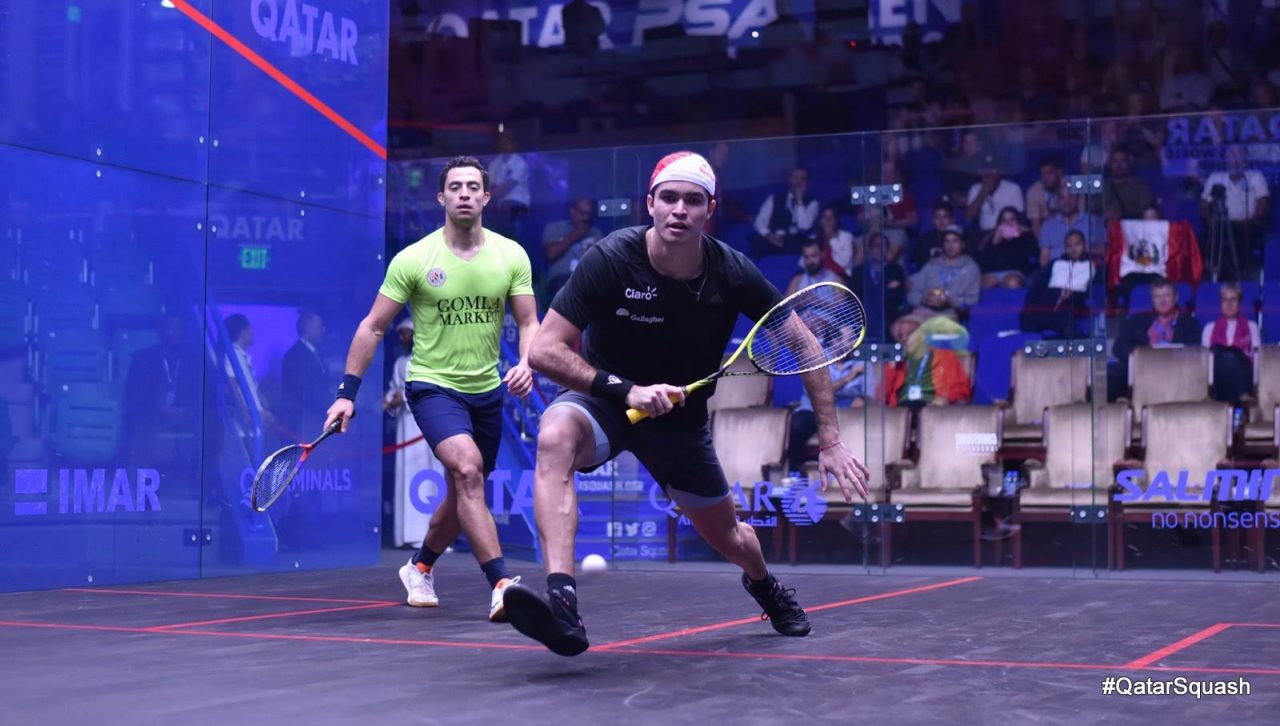 “I started a bit nervous as this is my first last sixteen of the World Champs. Then I started to play better and more consistently. I think I did really well at the end.

“This was one of my goals, to get into the quarter-finals. But of course, I’m feeling great and I feel like I’m playing good squash, so I think I can go all the way.

“We’re pretty close in the rankings and we’ve played against each other all our lives, so it’s pretty hard to be the best of friends off court. But we are trying to be as god as we can and we’re getting better each time”, Diego added when asked how he and Fares got on off court as the pair have had some bad-tempered matches over the years.