Aifa, the girls’ 3rd-4th seed, delivered one of her best showing of the year as she downed England’s Elise Lazarus in straight games at the National Squash Centre, Bukit Jalil on Friday.

After a nervy start, Aifa hit top gear while Lazarus contributed to her own downfall with a string of errors as the Malaysian sealed a 12-10, 11-8, 11-5 win in 28 minutes.

It was sweet revenge for Aifa who lost to Lazarus in their last meeting – the quarter-finals of the British Junior Open in 2017.

More importantly, the Kedahan, in her fourth world juniors appearance, finally earned a breakthrough to the semi-finals for the first time where she will face junior rival Jana Shiha of Egypt.
Second seed Jana dropped the opening game but had enough quality to power to a 7-11, 11-5, 11-7, 11-7 win in 31 minutes. 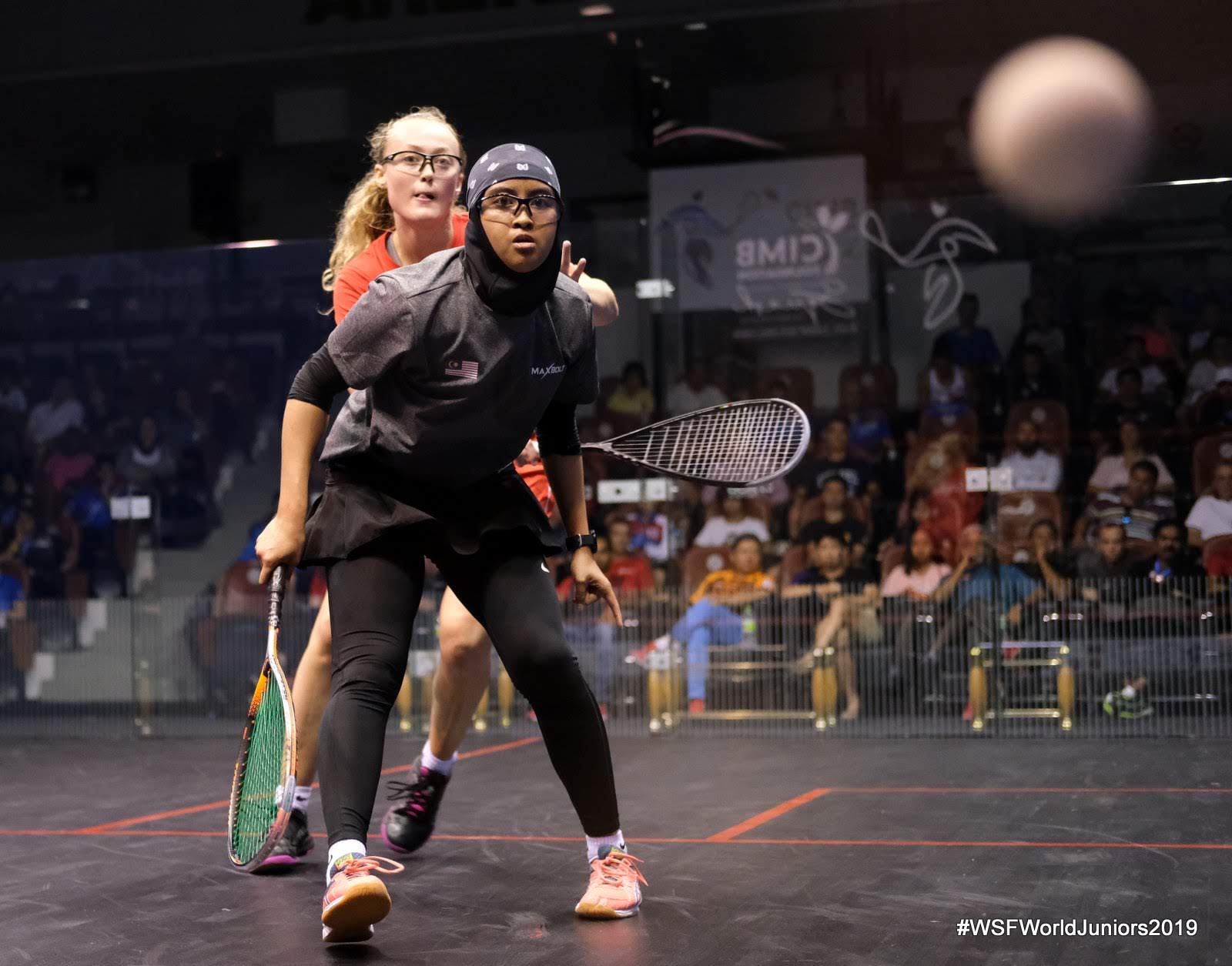 Aifa Azman was always ahead of England’s Elise Lazarus in their last eight clash.

“I knew it was going to be very tough against Elise because I lost to her back in 2017 and I haven’t played her since so I was a bit nervous to start,” said Aifa.

“But I did my preparations well and I’m very happy to win 3-0 and get through to the semi-finals.

“I go way back with Jana. I played her for the first time in the 2014 British Junior Open, a match which I won after being 10-6 down in the fifth.

“I also beat her the last time we met, back in 2018. I’m looking forward to taking her on again and hopefully get through it again.”

There would be no double Malaysian joy as 5th-8th seed Chan Yiwen went down battling to 3rd-4th seed Farida Mohamed in a physical contest. 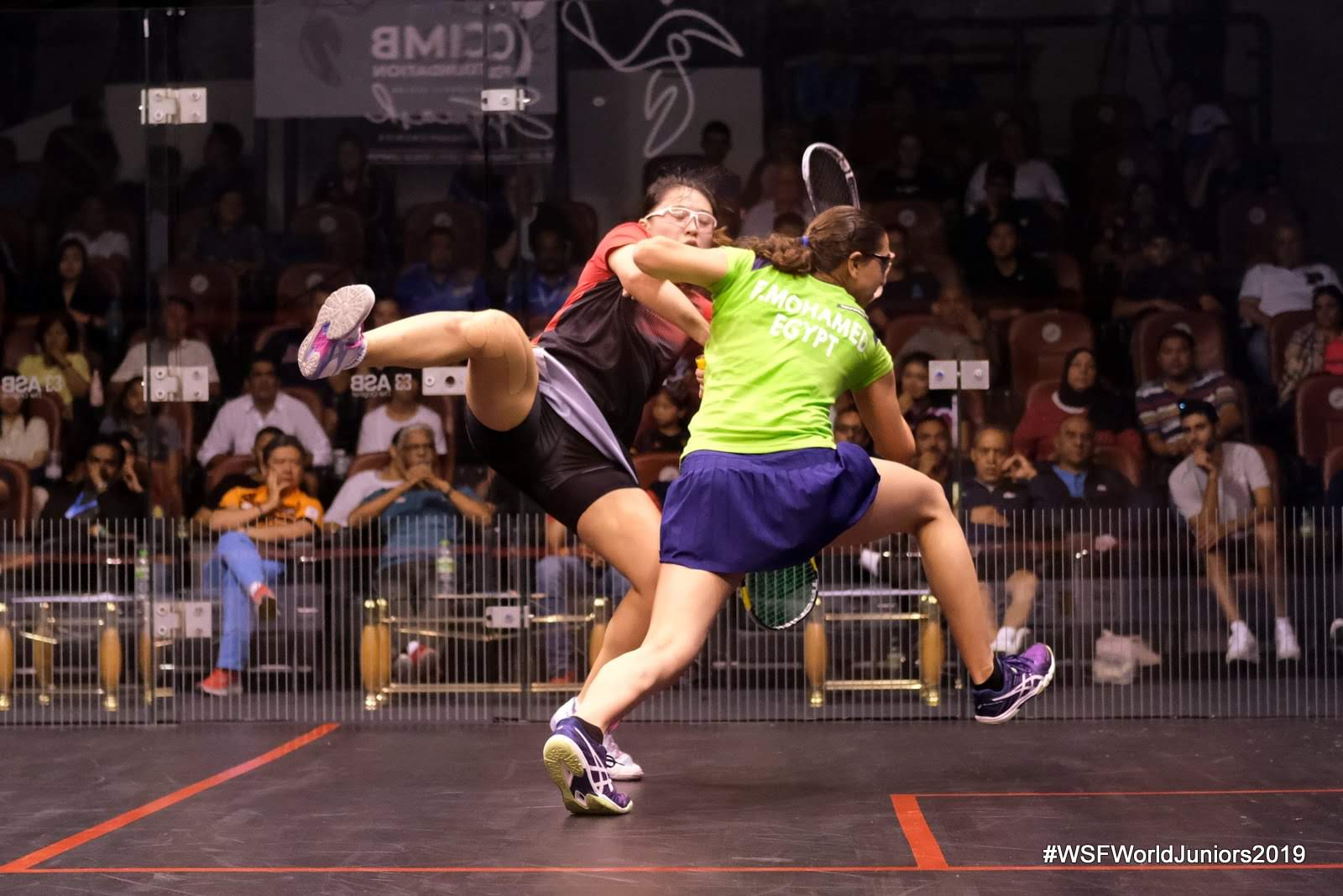 Chan Yiwen (l) goes down fighting against Farida Mohamed in a physical matchup.

“My game plan worked in the first but Farida changed things up and played faster and more aggressive and that put me under pressure the whole time,” said a dejected Yiwen.

“I believe I gave it everything I got. I went for every ball but unfortunately it wasn’t enough.

“Its definitely tough and disappointing to lose on home ground but its now in the past and I plan to come back stronger in the team event.” 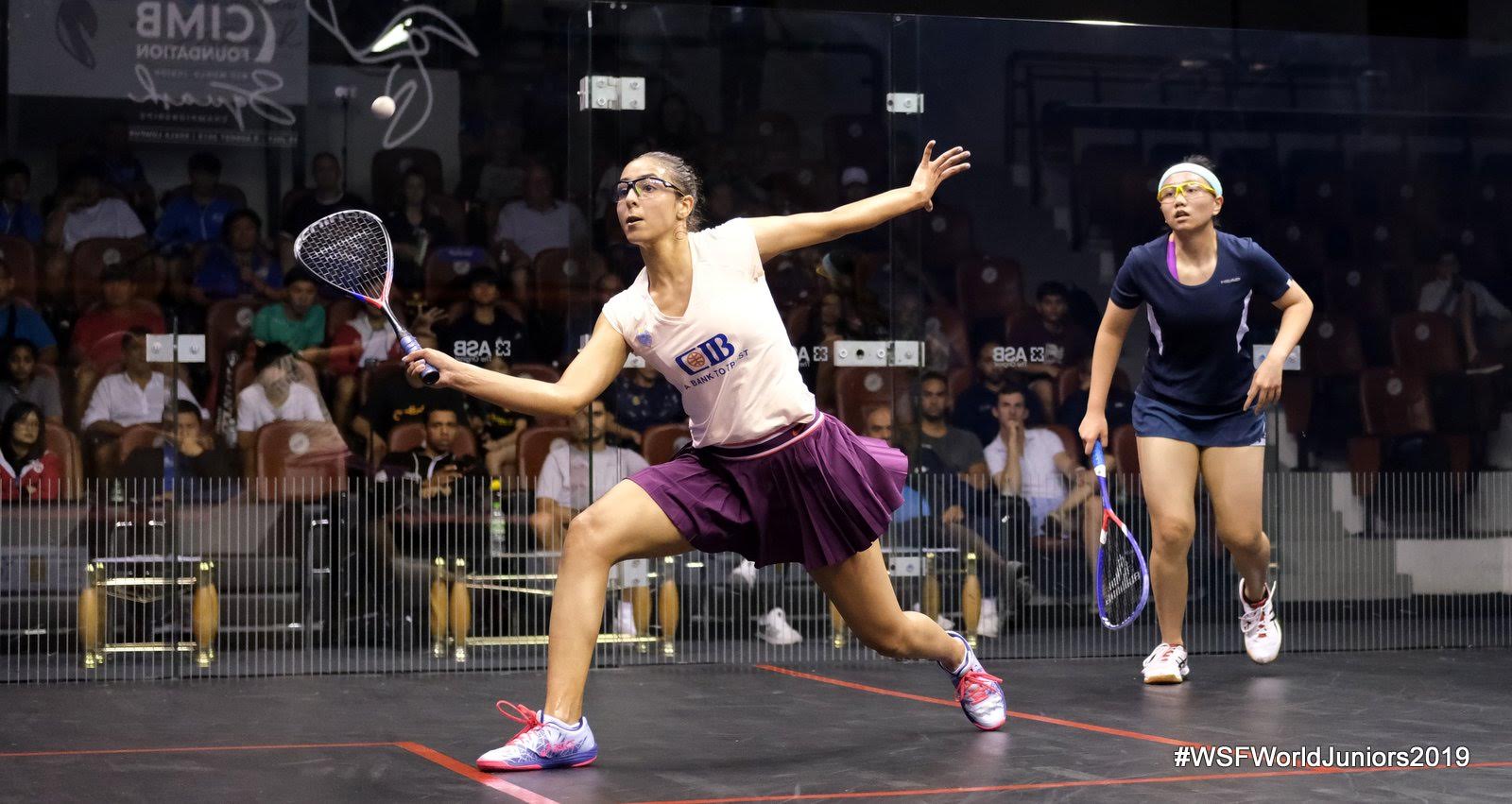 Hania, who is gunning for her first world junior title on her fifth attempt, survived a scare before getting past Hong Kong’s Chan Sin Yuk 14-12, 11-3, 12-10.

In the boys’ event, Egypt proved to be the dominant force as top seed Mostafa Asal, second seed Omar El Torkey and 3rd-4th seed Moustafa Elsirty all powered into the last four.

Mostafa, the defending champion, was really a class above as he gave home hope Siow Yee Xian no breathing space in an 11-3, 11-4, 11-1 demolition. 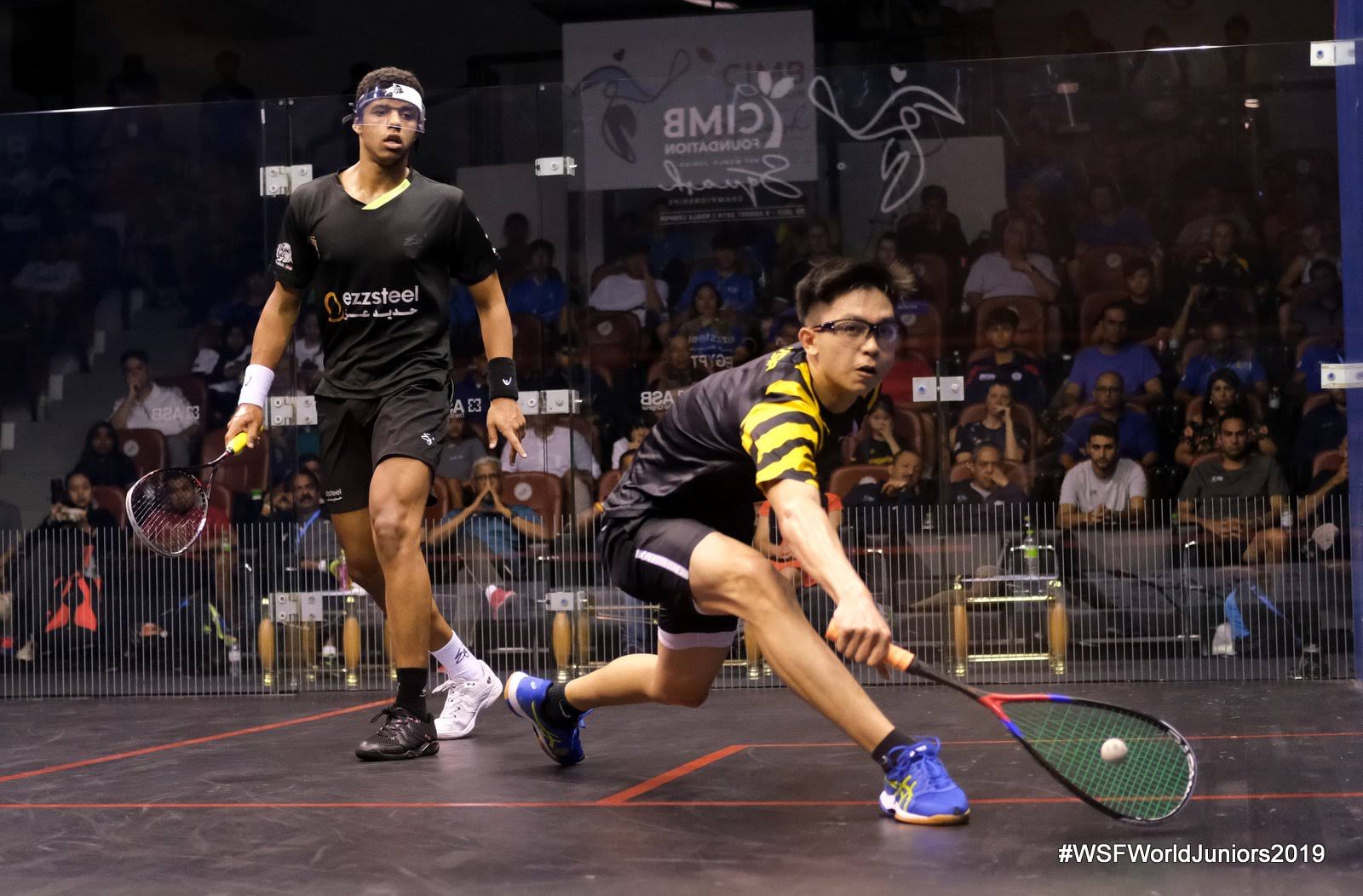 “I was concentrated to win and play good squash. I know my opponent is a pretty good player so I needed to get my tactics right and I’m pleased to be in the semi-finals,” said Mostafa.

“Its always tough being the top seed as all the focus is on you. The pressure is also on you as well.

“But now I’m focused and I’m hoping to keep up this level. Its just two more pushes and then I’m done with the juniors.”
Mostafa will meet unseeded English boy Anderson, who extended his giant-killing run by scalping a third seeded player in two days.

“Everything was going great for me until the fourth game where I was 10-2 up. I suddenly got nervous and forgot how to play. But I’m really glad to have gotten through to make the top four,” said Anderson. 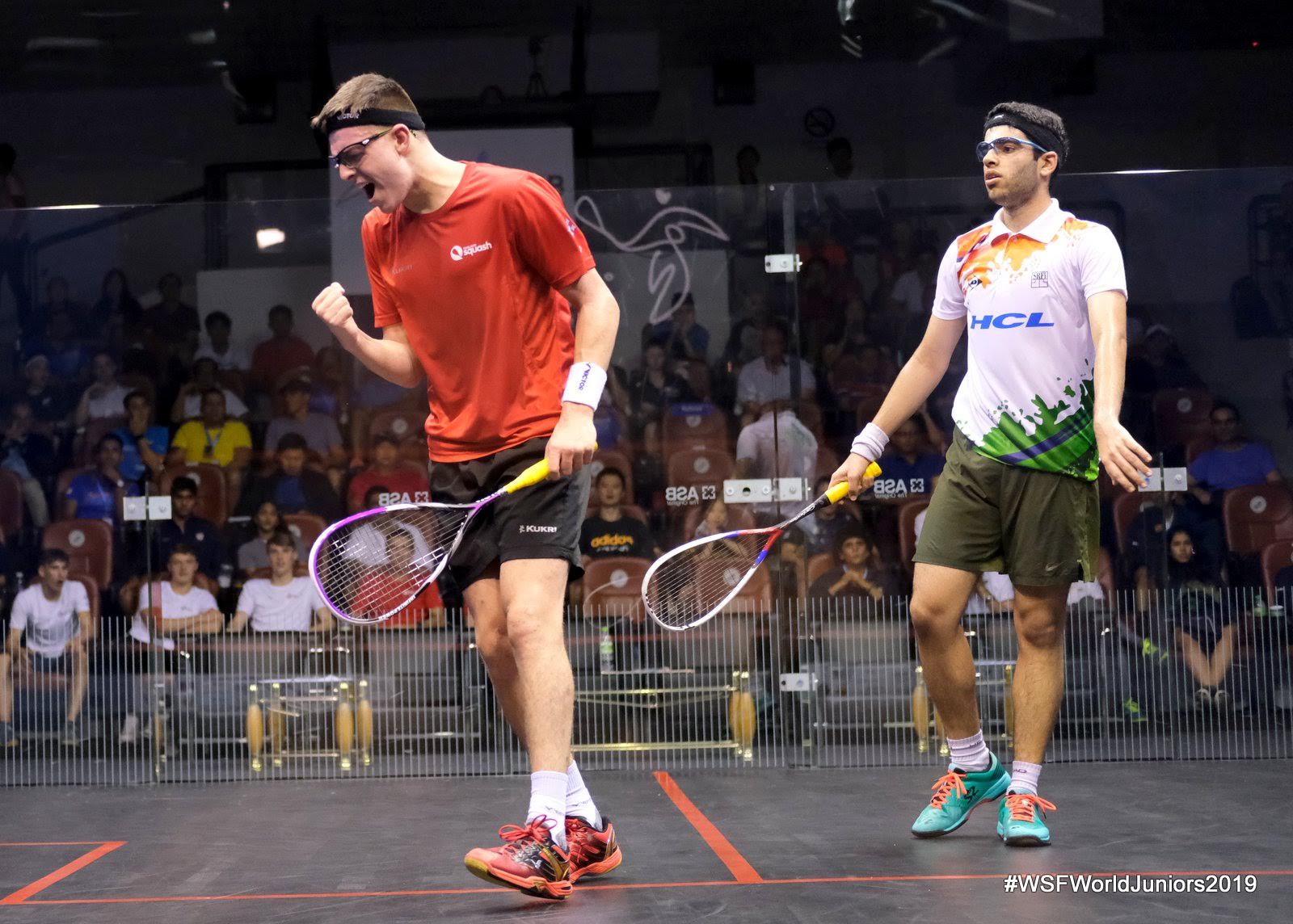 Lewis Anderson celebrates his third successive upset and a place in the semi-finals.

“Its really been an unbelievable week for me. To beat Veer today and the two I beat yesterday, is simply unbelievable.

“Back home my coach told me if I trained hard enough I could make the top four. He certainly believed in me while I didn’t believe in myself enough.

“Of course its going to be tough against Mostafa. He’s a top player ranked No. 29 in the world. I’m just going to go in there and play my game and see what happens.”

The semi-finals will start from 4pm with all matches streamed on SquashTV.