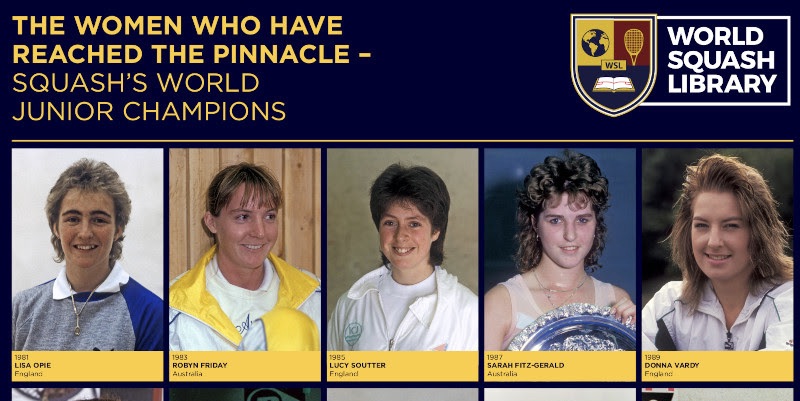 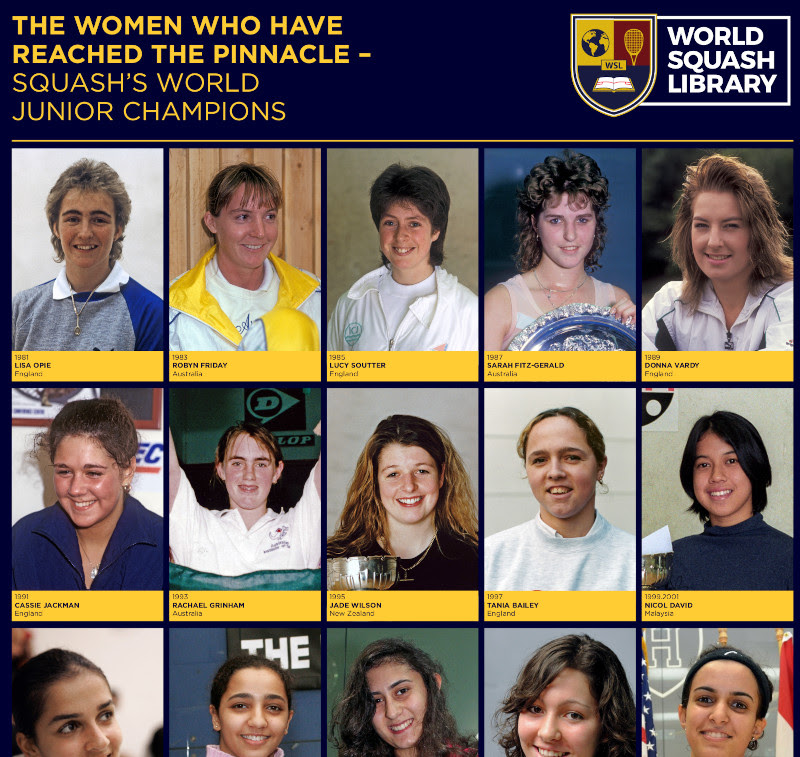 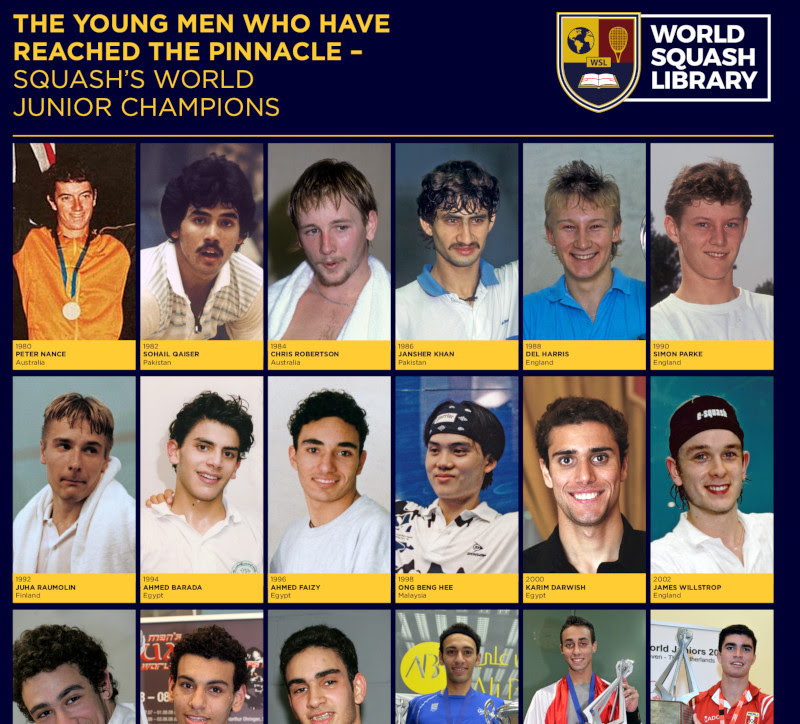 Following the success of its senior packages, the World Squash Library now launches synopses of the Men’s and Women’s World Junior Individual Championships, the originally biennial events which began in 1980 in Sweden for boys and a year later for girls in Canada.

The presentation features the dates, venue and results for each event over the five decades, including winner photos and programme cover scans.

There are also champions posters featuring the winners, in both digital and print form (partial versions of both pictured below). They are free to download by Federations, events, clubs and enthusiasts at www.squashlibrary.info/features

Australian Peter Nance, only seeded to reach the semi-finals, became the surprise winner of the first world junior (U19) title in the Swedish city of Kungälv. It was six years later in 1986 that Pakistan’s Jansher Khan claimed the title – going on to become the first of three players to also secure the men’s senior world trophy.

In August 2004, 16-year-old Ramy Ashour became the title’s youngest ever winner – the Egyptian progressing to become the event’s first double champion in 2006. By 2019, the men’s title had been won by Egyptians 14 times.

An all-English final brought the maiden women’s event to a climax in Ottawa in August 1981 when Lisa Opie beat fellow Guernsey girl Martine le Moignan to become the first champion. England and Australia shared the titles for the next 12 years – in 1987 Australian Sarah Fitz-Gerald becoming the first of six women to win junior before moving on to the senior world individual title.

It was in July 1999 that the formidable Nicol David made her mark on the world stage – the 15-year-old Malaysian winning the first of two world U19 titles before advancing to claim a record eight senior world titles!

An impressive run began in 2003 when Omneya Abdel Kawy became Egypt’s first women’s champion – the country going on to provide all but one of the winners to date, with Nour El Sherbini securing the title for a record third time in 2013 after becoming the all-time youngest-ever world champion at 13 in 2009.

The male and female events moved to annual staging in 2009 and 2010 respectively.

Now that the Individual Men’s, Women’s and Junior championships have been published, compendia for the Senior and Junior World Team events are being prepared.

The World Squash Library, established last October by former World Squash Federation CEO Andrew Shelley as a free service to provide information and answer queries, and preserve books, handbooks, magazines, programmes, documents and images for future generations. Donations to support the Library can be made on the Library website www.squashlibrary.info

By ALAN THATCHER - Squash Mad Editor I am looking forward to speaking on March 5th at the online Squash Summit organised by the brilliant...
Read more