How Ben became victim of the wannabe Alastair Campbells

What’s worse, someone who holds an unpopular view or someone who is denied that view by spin merchants who believe they know better?

Maybe today we should be asking that question of PSA player Ben Coleman, who sparked a little Twitter skirmish this week when he dared suggest women players don’t deserve as much prize money as the men.

Poor old Ben unlocked an avalanche of criticism, and a sizeable bucket of abuse, for daring to air his opinions. No problem there. The Essex lad is bright enough to defend his position and he gamely traded punches with his detractors. He was on the ropes but never went down. Good for him.

It’s a thorny issue equality and some hackles were bound to be raised. And raised they were as the debate that has consumed tennis watchers for years engaged its new squash forum.

All good knock-about stuff, the sort of nonsense that gets batted around squash clubs and pubs most nights of the week. So where’s the problem?

Well, there wasn’t one until Ben staged a quite remarkable 180-degree about-turn some 36 hours after he had teed up the debate.

Here’s what he had to say, see what you think.

“I want to apologise to anyone who was upset or offended by my original comments on here. It was an ill-informed comment and as a PSA player myself, I shouldn’t have posted it on a social media site. Didn’t mean to offend anyone, I’m all for what’s best for squash!”

Wow…that’s what I call a change of position. So what happened? Was Ben suddenly struck by a lightning bolt of clarity; was he kissed by the truth fairy; was he visited in the night by a couple of WSA heavies keen to re-adjust his take on all things femininity?

Did he hell. No, Ben became victim of one of the greatest scourges in sport today…Brand Protection. Yep, he copped the call from the suits, those wannabe Alastair Campbells who reckon they know best.

You can imagine the conversation. ‘Er, hello Ben, Tarquin here from head office. Sorry old chap, you seemed to have ruffled a few feathers and we’ve had a few nosey journos ringing the office for a comment. Really won’t do, you know. Squash is a nice sport and we don’t upset people. So be a good lad, back-peddle as fast as you can and send out an apology as quick as you can. I’ll tell you what to write.” 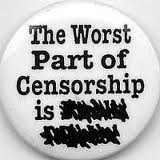 Sadly, Ben didn’t tell them to stuff their apology. This PR game is new to him, as it appears to be to  his trainee puppet-masters.

They might not have appreciated him spoiling their cosy afternoon of booking flights, taking meetings and sending out PR releases, but I’d rather hear Ben’s slightly misguided, honestly held views than their disingenuous, brand-protecting, pile of old tosh.

PS: Please post your views. If  you agree with me they’ll appear here on Squash Mad…if  you don’t, I’ll bin ’em.