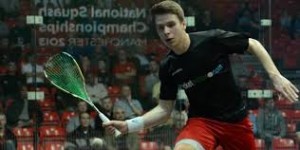 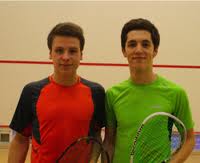 RISING England star Charles Sharpes has been hit by a two-month ban by England Squash which will cost him around £1700 in lost appearance money.

The Surrey based World No 62 was cited following last April’s spikey British Under-23 final against Essex’s Ben Coleman (pictured above with Sharpes).  He collected a number of conduct warnings in the fiery match between two players who are best of mates off the court. Coleman won 3-2 in 86 minutes but the final became almost farcical with a combination of questionable refereeing decisions, continuous interruptions and numerous warnings and conduct points dished out to both players.

Sharpes, 21,  had fallen foul of ESR monitors in a previous event so under a totting-up procedure received a month-long ban. However, England Squash delayed the start of the ban until this season for maximum impact.

That delay led to considerable confusion while Sharpes investigated a possible appeal against the ban. He played Premier League Squash for St George’s Hill against Exeter Diamonds on October 22nd believing he was cleared to play. Surrey team boss Danny Lee submitted his team line-up to England Squash on the day of the match also believing Sharpes was eligible to play.

But it was later ruled that Sharpes had broken the terms of his ban and subsequently received a further four weeks suspension.

He is now ruled out of all PSL and Surrey Cup action until December 2, Sharpes’ main source of income.

A friend of Sharpes told SquashMad:” Charles feels extremely upset, especially about the second month-long ban. He honestly believed he was eligible to play for Surrey St George’s. He feels a little victimised. He believed he could appeal and the suspension would be put on hold.

“As for the incident at The British Under-23s, we’ve all seen players get away with a lot worse. It seems there are some rules for some and another set for others. The refereeing was extremely poor. And Charles was told by the senior referee at the event that if anything came of the match with Ben then they would speak up for him.”

Gough has denied the accusations despite statements from witnesses and the referee to the contrary. ESR have spoken to the player, ref and a number of fans who were sitting court side. There is no word yet of their findings.