Low Wee Wern would love to peak in Penang

Alex Wan January 16, 2014 No Comments on Low Wee Wern would love to peak in Penang 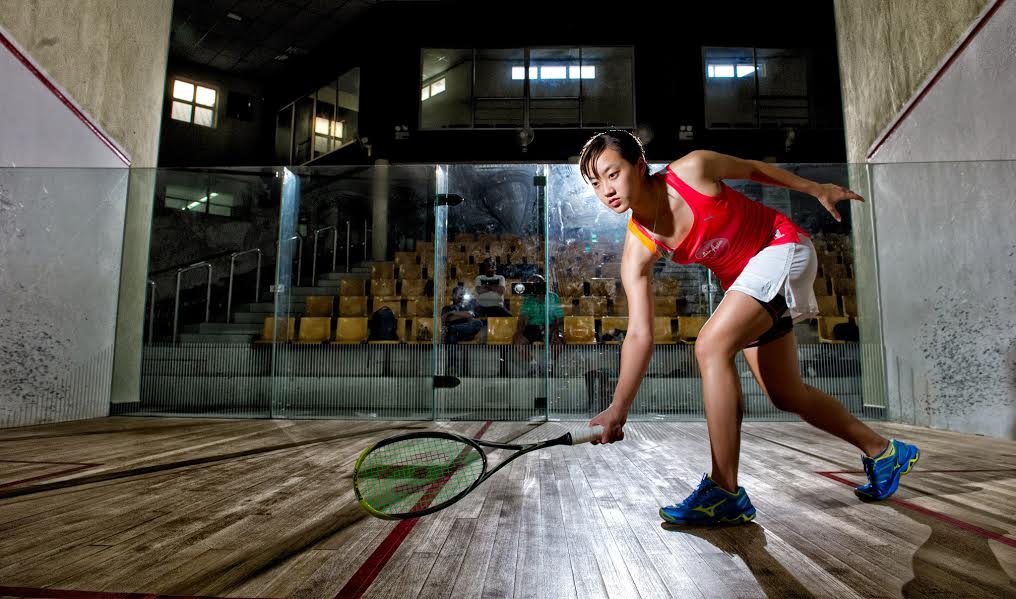 So, Penang will host the Women’s World Squash Championships. But while everyone was busy swarming around Nicol David, our Malaysian correspondent Alex Wan managed to persuade Low Wee Wern (world number six and Penangite too) to answer a few questions.

What followed was a gripping discussion concerning all manner of topics as the 23-year-old revealed a burning desire to topple David atop the world rankings.

From the ongoing equal prize money debate to the unfilled talent of Malaysian juniors, Wee Wern barely shirked an issue and seems intent on making huge strides in 2014.

1. What were your first reactions when you found out Penang will be hosting the World Championships?

I am very excited. Penang is not just my hometown but also my training ground. Not many people believed i could achieve what I have achieved today and its an amazing feeling to be able to play such a huge tournament like the World Open.

I remember watching Nicol play the World Junior Finals back in 2001 and the atmosphere was incredible & so inspiring. I was just 11 then and i can’t wait to actually be playing there myself now. 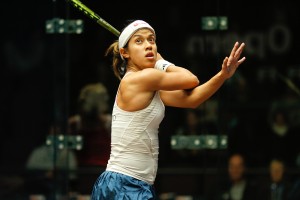 2. How much would you relish an all-Penangite final with Nicol David?

An all Penang final would be the best possible match up the crowd and supporters would hope for. It would be a dream for me as well to make it there and challenge Nicol for the World title.

But then again, it is the World Open and everyone will be playing their best to be crowned World Champion. Of course the top five girls are eyeing this but its still going to be tough with the top 20 players.

I am not ruling out the possibility of an all-Penangite final but it will also depends on the draw and I will definitely be working towards that.

Twenty thirteen was a mix of ups and downs for me. But then again, what doesn’t kill you only makes you stronger. I started off the year well, making the finals of the Greenwich Open, quarter-finals of Cleveland Classic and beating top 10 players too, which helped me get up to seventh in the world. I also signed with AirAsia, my core sponsor which is great.

In March, I lost my grandma, someone who is extremely close to my heart. Squash wasn’t impressive either, I lost in the second round of the KL Open and first round of the British Open, followed by losing in the final of the Asian Championships. 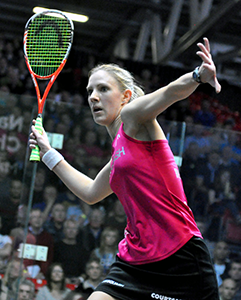 Things got better in August. I played well at the Malaysian Nationals to sneak a game off Nicol, and then did it again in the Malaysian Open quarter final. My highlight of the year has to be the US Open.

It was the first time I reached the semi-finals of a Super Series event and also the first time beating Raneem [El Weleily]. Losing to Laura [Massaro] (pictured right) so closely was hard to take in, but I learnt from it and took it positively.

Then, my dad was diagnosed with liver cancer and he isn’t doing well. I ended the year with another first round loss at Hong Kong. So, that’s basically a summary of my 2013.

4. For a long time, you’ve lived in the shadows of Nicol. Now that you’ve moved up the world rankings, do you get recognised on the streets?

There are times where some people do recognise me here and there but it’s nothing close to Nicol. I don’t think you can find a single Malaysian who doesn’t know who Nicol David is.

5. Many see you as Nicol’s natural successor. Do you feel overwhelmed with such a tag?

Nicol is a living legend. What she has achieved is truly remarkable and she isn’t done yet. It’s a compliment to be seen as her successor and I’m doing everything I can to ensure Malaysia is still a big household name for squash in the future, even after Nicol decides to call it a day. It won’t be an easy task but I am ready for it. 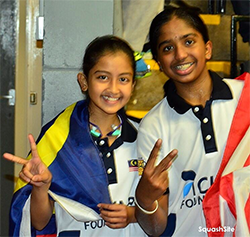 6. The recent British Junior Open was a huge success for Malaysia. Do you see a bright future for Malaysian squash?

Yes, the recent British Junior Open is possibly the best result ever for Malaysia and I am truly happy for them. Malaysian squash has a big pool of junior players thanks to the development program and sponsors whom make all this possible.

But these juniors are doing well in their younger days and don’t seem to continue on through to the under 19s, what more turning professional and taking it as a career.

We have a lot of juniors, but very few have the determination and passion within themselves to want to make it big in the squash scene. On a brighter note, we have future stars but whether Malaysia can nurture them into top ten players in the world is another question.

7. We’ve seen many promising juniors not pursuing a career in squash in Malaysia, your sister being one of them. What needs to be done in order to retain these talents?

It’s sad to see talent go to waste. We don’t have many players taking squash as career. Some were not given the chance, some did not want it personally and some had better offers overseas.

I think turning professional in Malaysia needs to be a bit more flexible, not a “take is as it is or leave it” kind of deal, which seems to be happening over the years. Compromise, sensibility, encouragement and support are keys to get these talents to turn professional.

One same contract can’t be given to every player who wants to turn professional. Each player has their own characteristics and how they want to do this, thus discussing it with the right people and coming to a compromise is key.

I have had my fair shares of hard times with the association but I am fortunate enough to have my coach, Aaron Soyza who stood by me for twelve years and counting. Some say I must leave Penang, some say Malaysia, in order to do well, but I believe it’s not where I am based that matters. It is who I work with and how hard I work at it everyday.

8. The Squash community suffered heartache last year when the International Olympic Committee rejected its 2020 bid. What does the sport need to do to finally convince the IOC of its suitability?

I think we had the best campaign for 2020 and honestly, I believed we could have gotten in! But it was a major heartbreak for the whole squash community around the world. I think squash needs more publicity for it to grow.

More live matches, press coverage, social media and so on. We need to reach out to more people and promote this sport we all love! Not forgetting well done to Zheng Guan from The Star Malaysia who managed to get squash on the front page and back page of the newspaper in the same month.

Of course, we will need more tournaments, more sponsors to come in and take squash up another notch. We have great athletes in the squash world!

9. What’s your opinion on equal prize money for the ladies?

I think it’s great. Some of the men may not agree to this but we put in the same amount of effort in training, preparing and competing, so why the disparity? 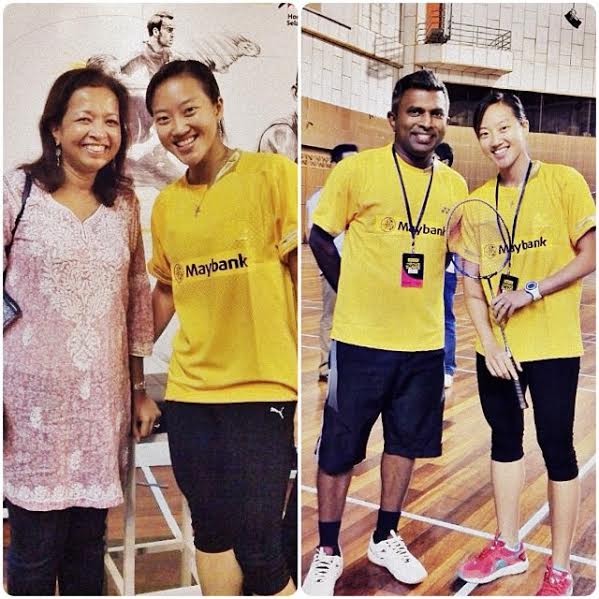 10. You’ve been playing quite a bit of badminton lately. Any particular reason behind your latest foray into another racket sport?

Well, it was just twice. Once, it was for an Astro (the local satellite TV provider) program called Sportswap, where two athletes compete with each other in our respective sport and badminton was the tie-breaker.

The second time, I was invited to attend Maybank’s ‘Smash and Donate’ campaign, where I played badminton with the CEO to raise funds for Hospital Selayang’s Liver Transplant Foundation. It was a charity event and I’m happy to be a part of it.

It will be a very busy year with the Commonwealth Games, Asian Games and World Teams on top of ten WSA Tournaments.

I’m looking to break into the top five in the world and one of my main goals for the year is to help Malaysia win the World Teams. We finished third for the last three editions and we have a great chance at this, with Nicol still at number one in the World.