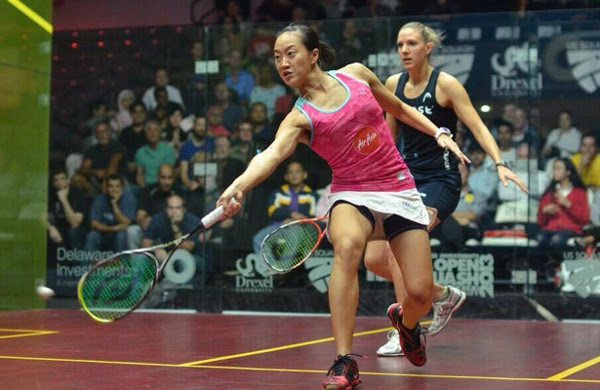 Low Wee Wern dreams of emerging from the shadow of squash superstar Nicol David and is targetting next week’s $120,000 Women’s World Squash Championship in Malaysia as another step towards realising them, writes HOWARD HARDING.

Local hope Low is seeded to achieve a fourth successive quarter-final berth and begins her campaign against Donna Urquhart, a former world  number 13 from Australia ahead of a possible last eight showdown with England’s Laura Massaro, the number two seed.

“I remember watching Nicol win her World Junior title here back in 2001 and that was simply inspiring,” said the 23-year-old who achieved a career-high world number six ranking in February 2013 and is the event’s number six  seed.

“Sometimes it still feels unreal that I am actually up there along with Nicol, playing the same tournaments and actually challenging her on court. I am looking forward to this event, not just because it’s the World Championship but also because it will be played here in my hometown and my training base, Penang.

“But it is a great initiative by our Chief Minister of Penang and also Thomas Chan (Nusmetro Group), the two people who got the World Championship to be hosted here. (Thomas is also one of my sponsors).”

Wee Wern has already notched up 16 appearances in WSA World Tour finals, with six titles to her credit – her biggest success to date being the $55,000 China Open in 2012 in Shanghai, where she triumphed as the No6 seed.

“There will be some pressure on me as well to do well here – but the huge chunk of it will be on Nicol,” continued Low. “Nicol is by far the most successful squash player in Malaysia and arguably has the best track record the world has ever seen.

“But for what she has achieved, she is ever so humble and ready to help the rest of us. I’ve known of Nicol since I started playing squash but I got much closer to her over the years when I was a budding junior and slowly making my way up the rankings.

“She would stay back to watch my matches and speak to me in between games when we are playing overseas as I don’t have my coach around for the most part. Nicol has helped squash in Malaysia grow tremendously. Without Nicol and Beng Hee, it will be much harder for any us to play professionally on the tour.”

“My aim for this event to at least get to the quarter-finals first,” added Low. “I have to take one match at a time and if all goes well, I will be up against Laura in the quarters. We have had close matches before but she has beaten me on most occasions.

“This year will be a big year with the Commonwealth Games, Asian Games and World Teams on top of another 10 WSA Events. One of my main goals for the year is to help Malaysia do better than our third place finish at the World Teams.

“I want to thank my sponsors Air Asia, Herbalife, PBA, Nusmetro, Harrow, LineBreak, Puma, Mzuno & NSC (National Sports Council) for their continuous support over the years which enables me to play on the circuit and achieve all my goals and dreams. Also my coach Aaron Soyza, who has been coaching me for the past 12 years and being there for me every step of the way ever since. SRAP and SAP, for providing me with world class facilities and also the centre which I spend most of my day at!”

Following three days of qualifying in the Penang Women’s World Championship, main draw action will take place on an all-glass showcourt at the SPICE Arena from Tuesday (18 March) through to the final on Sunday 23 March.