Misaki Kobayashi and Ryunosuke Tsukue both successfully defended their national titles after seeing off their determined opponents at the Japan National Championships held in the city of Utsunomiya, located a 100 kilometres north of Tokyo on 20-24 November 2015.

In the semi-finals, Kobayashi had ousted top national junior Satomi Watanabe, while Matsui saw off the challenge of her much younger opponent, Mayu Yamazaki. 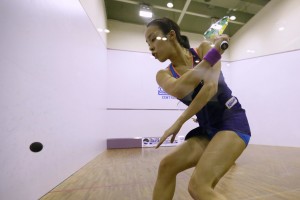 Misaki Kobayashi on her way to a seventh National title.

The seven-time champion, speaking from Hong Kong where she has a bye in the first round of qualifying of the Hong Kong Open, said, “I’m really grateful to continue my run at the Nationals. It’s been seven years running! I wouldn’t have done it without all the encouragement and support. The first two years were tough for me emotionally, but it became more comfortable after that. It’s going to be more difficult for me as a few young players are coming up. It will be exciting, and it’ll also motivate me to get better as I hope to retain the title for as long as I could”.

With Kobayashi still only 25 years young, it is very likely that she will continue to be rewrite her own records. 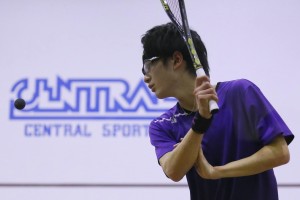 18-year old Tsukue returns a shot in the final.

In the men’s event, Ryunosuke Tsukue denied a family double after beating Misaki’s younger brother and 2012 champion Ryosei Kobayashi in the final. In a match played at a high pace, the 18 year old from Yokohoma squeezed through in straight games, 11-9, 11-7, 11-8.

Tsukue’s win cemented himself as a force to be reckoned with in the Japanese squash scene, having won his first national title the year before as a 17 year old to be the youngest Japanese national champion ever.

“The National Championships is something I’ve looked forward to since I was a kid. When I became the youngest champion last year, I couldn’t believe it. I made it my target to retain it this time and I am glad I did. This win will spur me on to continue training hard even as I am in university, and when I finish, I hope to play full-time in the PSA.”

The End of an Era 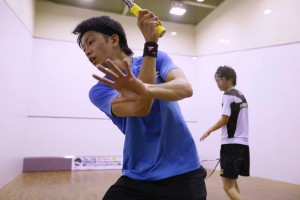 Yuta Fukui (l) returns a shot to Ryunosuke Tsukue in their semi-final match.

Yuta Fukui announced his retirement from competitive squash after his semi-final loss to Ryukue Tsukue. The 27 year old Nagoya resident joined the PSA in 2007 and played in 50 events, reaching a career high ranking of 146 in October 2013.

Despite not achieving his goal of being in the top 100, Fukui has always been admired greatly by the Japanese squash fraternity. Amongst them are his peers in the national team, who had this to say of him:

“Yuta and I grew up together since we were juniors. We went to a lot of tournaments together and we were based in Toronto for quite some time as well. I have always wished I had his talent! It will be sad not seeing him around anymore at tournaments, but I wish him best of luck in the next chapter,” said Misaki Kobayashi.

Men’s champion Ryunosuke Tsukue, who beat Fukui en route to his second title added, “Yuta Fukui is one of the players I’ve admired since I was young. I never imagined that I would be playing with him at his level, let alone beating him. He’s been one of the players I wanted to beat, which has pushed me to grow into the player I am.”
Results title (all Finals):